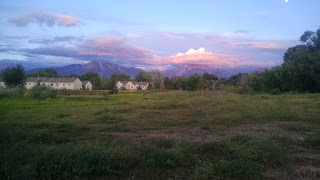 I hit my mileage quota this week.  Usually about two weeks before a marathon I like to get in roughly half of my largest mileage week.  With eighty miles being my largest weekly total, I had about 40 in mind.  Sure enough I managed to get that total.

Saturday's long run went pretty well.  I didn't wear a Garmin, but it felt at about marathon pace.  It was also 70 degrees, so I certainly felt the heat.  When I run in the Jackson Hole Marathon next weekend, it should be quite cooler (I hope).  I just have to deal with the altitude... I don't think I've run at 6000+ feet before.

I was completely out of gas on Tuesday.  My mind wanted to run but my body wasn't going to have it.  Last year I had that problem on an almost daily basis.  I still don't understand what triggers it but it sort of sucks.


I did purchase a new Garmin.  It is coming in the mail -- I hope soon.  I worked with the customer support folks about getting 6 month old one fixed but apparently they don't make it anymore and wouldn't be able to repair it.  Perhaps I should've gotten pissed but I wound up taking it on the chin and just got another one.  I need one for Jackson.

Also, my Brooks Adrenaline Shoes that I bought on Aug 6th?  They already look like they've been through a war zone.  Sure, I put probably about 150 miles on them and a hike, but they broke down very quickly.  They look like they have twice as many miles on them than what they do.  Not good.