It's been a while since I've made a trip to Wendover and the rest of the crew was sort of itching to go.  Being that it was 5x comps and we had some free food and free play coming our way we decided to make our way west for a day of gaming and eating.

The road trip there was pretty uneventful and we actually left on time (around 9AM).  It is amazing how every one can be on time when there is gambling on the line.  We did have to make a pit stop at the Aragonite restroom and I managed to snap a few pictures despite the warnings about scorpions and rattle snakes. 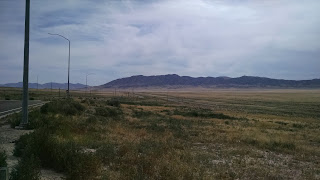 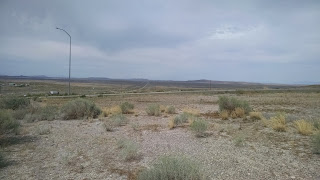 We arrived just before 11.  I had done a run in the morning and had had a protein shake for breakfast.  Believe it or not, I was not terribly hungry.  After activating our player's cards each went our separate way for a bit.

I jumped on a Fu Dao Le near the buffet.  I've always had super luck on it and wound up sticking $40 into it.  I got some play on it, but didn't really win anything.  Soon I was $40 in the hole. 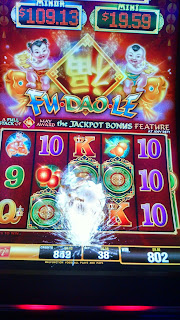 We had to wait in line for the buffet on account that the bus from SLC arrived, which means a ton of people were hitting up the buffet.  The wait in Wendover is rarely a big deal and we had to kill about 10 minutes in line.

They were obviously busy today and it took a while before we got our drinks, but the buffet lived up to its expectations.  I've had very few disappointments with the Oceano Buffet. 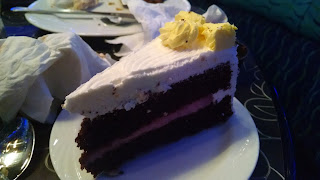 After eating I mosied over to another Fu Dao Le machine and put in $20 and another $10 of free play into it.  Almost immediately, I got the Red Envelope jackpot. Unfortunately someone had just won it moments before I had so I only got about $100 from it: 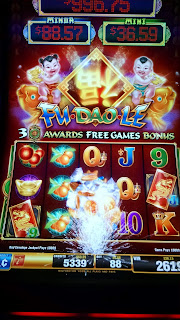 I played a bit more and netted the minor jackpot for another $90.  I was definitely on a roll! 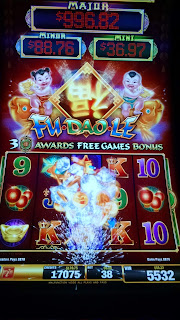 I goofed around some more in Montego Bay but wasn't really getting anywhere.  Shari and her mom wanted to go to the Rainbow, so once we got everyone assembled we made the drive down Wendover Blvd.

I normally don't have any luck at the Rainbow so I reluctantly went along.  Sure enough I wound up putting a fair amount of money back into the Fu Dao Le's and had zero luck.  Sure I'd get a small bonus or two but I was dumping all my winnings down the drain.

Even video blackjack was evil to me...

As the day progressed I was starting to dive back into the red (I think) and I was sort of itching to leave.  I hadn't slept well the previous night and I was almost falling asleep while playing.

On a whim, I put in a twenty into Super Red Phoenix and was alternating $.55 and $1.10 bets when I hit a bonus round.  I selected 15 games at x2 payout and wound up netting an $85 bonus round (it re-triggered too). 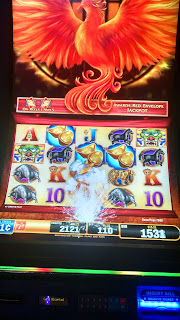 As we were leaving, I was waiting for people to finish using the restroom, so I put in a final twenty into a Fu Dao Le and got a sweet bonus round.  I almost got the Red Envelope bonus on that too.  I think I managed to make a $30 profit on it.

Overall this was a good trip.  To be honest, I didn't clean up at the buffet today.  My appetite wasn't really there.  I think I was a plate short of my normal "load".  We did eat for $18, which is a steal for two meals of this caliber.

Gambling-wise, I came home with a good $60 more than I left with.  Shari came home with $5 more.  We also nearly doubled our comps, so we'll be eating for free a few more times.

We are heading west again next weekend, so I am glad I came home with money and will definitely have some spending money for that trip.
Posted by Eddie Gaul at 6:24 PM