With the need to get in some extra miles this week - as well as to kill a bit of extra time in the morning - I decided to head out on for another exploratory run through the city streets of Elko.

Once again, I was staying at the Red Lion and woke up around 7:15, threw on a pair of shorts and took off for the west side of town.  I've explored this part of town several times now but decided to make a jaunt into the residential section.  I've explored this area from time to time as well, but I wasn't sure how much time I had to kill and I knew I wanted to stay some what close to the center of town.

The north side of Elko (at least near Idaho Street) is lined with stately trees and mature houses.  There are also some gnarly rolling hills here as well.  The streets here are also insanely wide.  At the hour I was out, there was only a handful of people out and about: 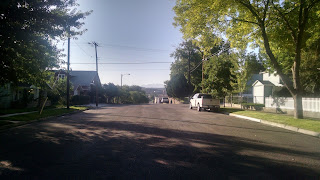 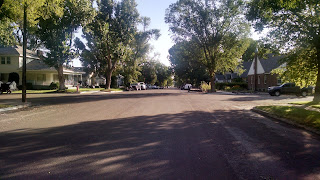 Thanks to my smart phone, I was able navigate my way to Mountain City Highway.  I opted to cross over to the south side of town.

Here is where the neighborhood starts to get more edgy as well as a bit seedier.  The tranquil setting gave way to empty fields, railroad tracks, double wides and barking dogs (including one tiny poodle who chased me for about 3 houses).


I did find that Elko does indeed have a bike trail that hugs the Humboldt River.  I don't have any idea how long the trail goes for, but I made a mental note to explore it further next time I pay a visit.

Of course, no run through Elko isn't complete with a quick jaunt through the downtown area: 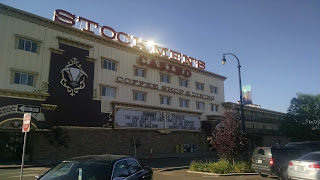 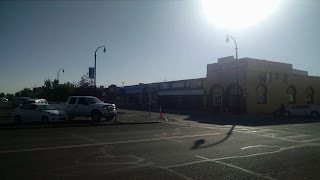 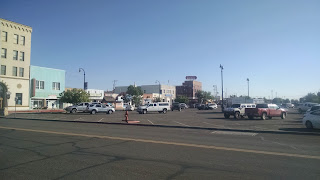 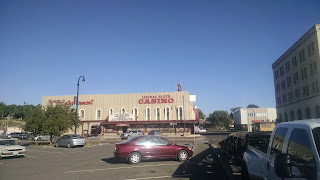 All told, about a 10K run.  I felt pretty good on my feet and well rested.  While I did stop a number of times to take pictures as well as get my bearings, I did get to see some new territory and made some plans for future runs through Elko.
Posted by Eddie Gaul at 8:03 PM