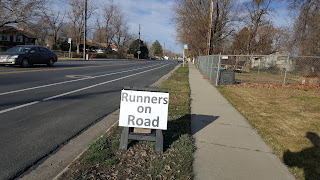 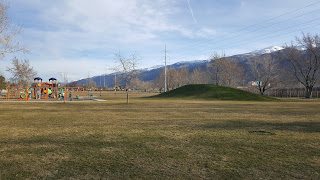 One of the best deals of the spring racing season here in Utah is the March Madness race in Woods Cross (or West Bountiful).  The race supports the local food bank and for $20 for the 5K / 10K or $30-something for the half marathon, it is a bargain race that offers some a great experience at a local cost.

I've done it off and on throughout the years as it sometimes conflicts with the Sand Hollow race down in Hurricane.

This year, since I've already had a bunch of races in Southern Utah, I opted to sign up for this one when they had their annual sale.  I signed up for the 10K -- enough of a distance to get in a bit of a long run without killing myself by going for 13 miles.  In the past, I've done the half marathon but in order to save my spring racing season without overdoing half marathons, I dropped down to the 10K. 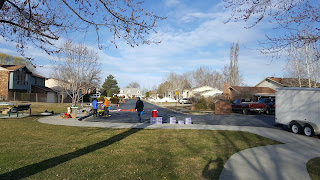 Normally this race is a wild card on account that the weather can be just about anything.  In years past, it has been been super windy or just simply wet.  This year, the weather was just about as perfect as can be.

I made the roughly 30 minute drive to West Bountiful park and snagged my bib in short order.  They were still setting up the race and I took stock of the wind condition -- a fairly strong wind from the south, but definitely not as bad as years past.

I did about a mile warm-up (if that) and considered myself good to go. 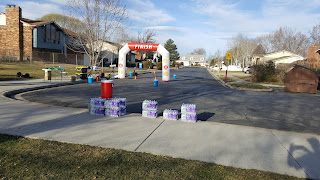 The race started promptly at 9 AM and I was off and running.

The first third of a mile takes you through a neighborhood before dumping you out onto the main drag where you head west towards the Legacy Bike Trail.  It is 100% residential and there wasn't much traffic as several hundred of us ran towards the bike trail. 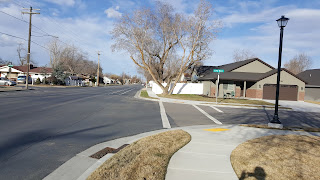 There was a little bit of a tail wind here and I was working to keep up with a friend of mine (DK) who was shooting to run a 52 and change.  I figured I'd be lucky to crack 55 minutes but I'd tail him for as long as I could in hopes that I could hang with him.

I felt pretty good as my watch buzzed out an 8:30 first mile.  Exactly what I wanted to hit.  However, part of me was trying to go out a little more conservatively as I knew I was going to be hit by a head wind on the way back. 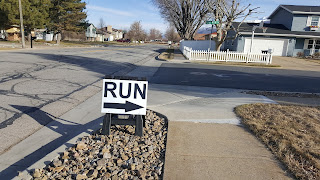 By mile 1.25 I was on the bike trail and I was being pushed along by a nice tailwind.  I was pleasantly surprised to see an 8:15 appear on my Garmin as  I reached mile 2.

The Legacy Bike Trail is a multi-use bike trail.  It is popular with cyclists and runners.  Generally speaking, I've seen more cyclists than runners on it, but for a Saturday morning it was pretty busy.  The trail is mostly flat with a few tiny climbs and descents.  I knew the course very well since I've run more than a dozen races on it since moving to Salt Lake City.

I knew I had gone out too fast once I started to see some of the fastest 10K runners heading back (there weren't that many and they weren't that far ahead of me).  I was still running around 8:30 pace until I did the turn around.

Then I was blasted in the face by the tailwind that had been pushing me along.  It wasn't as bad as it was in years past, but it was definitely going to take a bite out of my pace.

I had kept up with my pacer and I sensed that he was slowing down to accommodate me.  I don't know how he did it, but he was telling me stories about other races he had done.  Come on! I am sucking wind you have energy to talk?

We worked off one another until about mile 4.75.  I was hurting pretty bad and DK pulled ahead of me.  I was trying to hunt down another guy who, for my pride's sake I wanted to beat.

I looked behind me and didn't see anyone chasing me down and I kept willing myself to go faster.  But about a 9 min / mile pace was all I could handle.

I kept praying that I'd close in on the final turn off and sure enough, it appeared and I swung left to make the final zig-zag to the finish.  I was nowhere near DK and the guy I had been chasing opened up a solid lead on me.

I pushed it to the finish though and crossed in under 54 minutes, which beat my expectations (it would've been close if my Garmin was not correct). 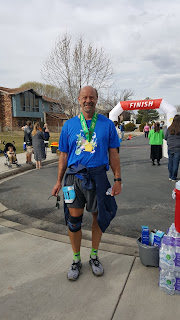 I was pretty with my result.  I had set out to maybe get about 55 minutes but I actually came in in the 53 range.  Definitely not earth shattering, but I like it when I beat my expectations.

The course could've been accurate.  There is a tunnel that you have to go under which takes about 30 seconds to go through.  I imagine this could account for the missing ".06" of the race.  Most people's Garmin's came up with this short coming. 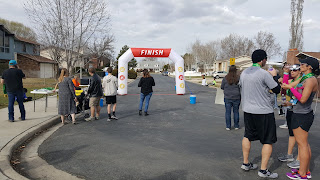 Post race food was probably one of the best I've had.  Pizza, chocolate milk, high end muffin like cupcakes, candy, cookies, bananas, water.  I pretty much made a meal at the end -- and all for $20 too.

I wound up donating $10 to the food cause and scored a trucker hat. I also scored some extra medals  -- one for finishing, one for an age group award and it would appear that the race director had extras, so I scored a mug and drinking glass.  (I also swung by the South Davis Recreation Center to pick up my official Sweethearts 5K finisher's medal). 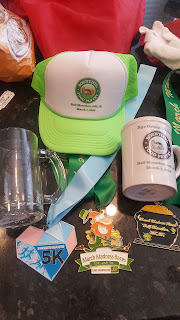 I have nothing but positive vibes about this race.  I definitely got my money's worth and had a good morning getting in a solid workout and seeing people I hadn't seen in a while.  The course wasn't super exciting (I've run it a ton of times before) but it is a fast course.

If my schedule permits, I'd love to do this one again next year.