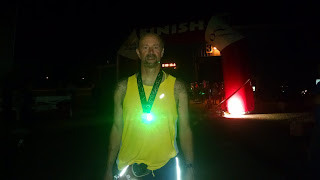 
Since 2012, I've done the Legacy Half Marathon.  It is sort of a summer time ritual for me.  You can read about my past runs here: 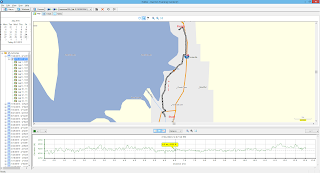 I signed up for this race for about $60 about a month ago.  I probably wouldn't have run it had I registered this week.  I have been battling some tendinitis where my shin connects in with my foot.  Just about every step I take with my left foot yields a tiny bit of discomfort.  I get this injury from time to time and it usually takes 24 - 72 hours to resolve itself.

Either way, I left the house at about 7:30 to make the 35  minute trip up to the Legacy Events Center in Farmington Utah.  We have been under a bit of a heat spell of late and the temperatures in my car read about 90F -- definitely warm.

The Provo Midnight Half Marathon that I had done about 6 weeks ago is the sister race to this one.  I like this race a lot better -- the trail is in better shape and this race gets a bit more attendees.  On the downside, though, the finisher medal, t-shirt and awards are identical to each other.

I picked up my shirt (which will be given to a lucky recipient at work) and hung around until the 8:30(ish) bus loading time.  The bus drives you roughly 13 miles south to North Salt Lake where you get to hang around for about an hour before the race starts.

The time went quickly but I could tell attendance seemed to be done this year.  I think there are so many races in Utah right now and only so many runners so they are all cannibalizing each other.

The race started at 10pm sharp and I took off at a good yet comfortable clip.  Since this was the fourth time I've run this race and I've run various stretches of the bike trail countless times for other races I've done I knew that this course was largely flat and easy to navigate.  As a matter of fact, last week's Handcart Half followed a good portion of the course as well.

I tried to hold back at the start because with the heat, I didn't know how well I would respond.  I was carrying about 28 ounces of Powerade as well as a gel.  I am glad I took my flask on account that there were a few stretches, particularly in the early miles and late miles were my mouth was dry.  There were copious amounts of aide stations though, so I probably didn't need it.

Being that this was a night race it was very hard to judge my pace.  While I had a tiny headlamp and I was able to lap my Garmin during the mile markers I really didn't have a chance to do the math on my pace.  I felt like I was running pretty solid throughout but I also knew that I was fading at the end.  Looking at my splits, I do see a drop off, but I don't feel like there was a death march at the end and I still had some gas in the tank to go longer.

The first few miles I ran with various people.  However, since the race wasn't terribly crowded and many of the runners were on the slower side, I was primarily running solo.  Occasionally I'd hang with someone and I even managed to reel in some early fast starters.  I was hoping to keep the 1:45 pacer in site but after a few miles he disappeared.  The next pacer was for 2:00.

Around mile 10 I wound up catching a lot of the walkers for the 10K who had turned around at their half way point.  While it was empowering to know I was still running and running pretty well, part of me wanted to join in walking with them.  So it was a mixed bag.  I also ran into a few 5Ks.  (The 10K started at 11 and the 5K started at 11:30).

I managed to finish pretty strong and I definitely liked the new ending area.  The past two years you had to run on some really choppy dirt that made it easy to trip (especially running at night).  This was primarily due to construction.  The race had a nice finish zone and party area.

I was a bit disappointed when I saw my time.  I felt like I was running faster than I was.  I felt for sure I was going to run a sub 1:50.  I think the shin splint issue as well as the heat contributed to an average performance.  I also suspect the bulk of carrying my own fluids slowed me down a bit, but if anything that would be trivial.

On the plus side, I did finish 3 seconds faster than last year.

After the race I hung around and socialized a bit (I really didn't know anyone but as runners, it is easy to make idle chit chat).  They have a big neon party with booming music, awards and food.  As usual, the race was about 66% women and 33% men and quite a few younger folks.  Amazing the ratio discrepancy.

Of course I grabbed a FatBoy ice cream sandwich and some peanut butter sandwiches.  I also managed to get a 3rd place in my age division.  Sort of a let down that by the time the half marathoners get their awards that most people have already left.

I didn't get home until after 1 AM.  I had a good experience though and for the most part I felt like I had run the race pretty well.  The Legacy Half Marathon continues to be one of my favorite events and I look forward to 2016's edition. 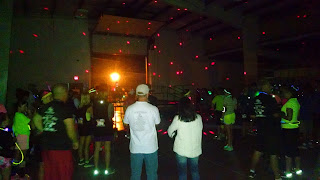 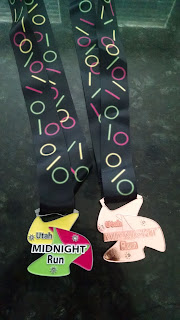 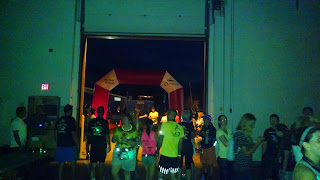