A few weeks ago Shari and I were eating at the Montego Buffet Oceano Buffet and we saw "10X comps, June 5-6"  For those not in the know, 10x comps basically means you get 10 times as many points when you gamble.  For cheap skates like us, that means if we gamble say $50 we might get $1 in resort credit.  With 10x comps, it means we'd get $10.

We've seen 7x before and that usually warrants a Sunday trip, but 10x??  Unheard of!

So with a little planning, Shari and I lined up a free room and headed out to West Wendover, Nevada directly after work on Thursday.

The trip to Wendover was pretty uneventful.  We had smooth sailing and when we arrived we swiped our cards and got onboard with the 3x comps.  A mere pittance compared to what would be in store tomorrow.  We also got $10 in free play and a 2-for-1 buffet pass.

We weren't really planning on gambling much on Thursday night.  Sure 3x comps isn't bad, but with tomorrow's action, we definitely wanted more action then.

For $18.11 we ate a really nice dinner buffet.  They also had my favorite shrimp dish -- some peanut kung pao thing that has just the right amount of heat.

The line for check-in was sort of long but it was a quiet night.  We got a room in the new section.  I am really pleased with some of the updating that Montego Bay is doing.  They have replaced all the carpeting and everything has a new smell to it.  The new wing is pretty nice, but it is a haul to the pool.

After settling in, we did gamble a bit.  I actually was on a decent winning streak.  Nearly every machine I put money into -- I won something... Not a huge amount but a few bucks here in video black jack to $10 - $20 on my favorite Fu Dao Le machines.  By the time I went to bed I would've guessed that I was up about $30 - $40. 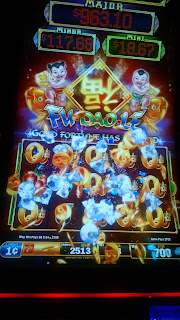 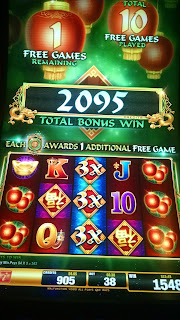 In the morning I rolled out of bed and did my traditional run out in the desert north of Wendover.  You can see photos here.

Afterwards I headed down to the pool.  They have finally opened the outdoor pool (the saunas are open year round) and I was pleasantly surprised with how warm the pool water actually was.  I definitely hope to spend some more time there this summer 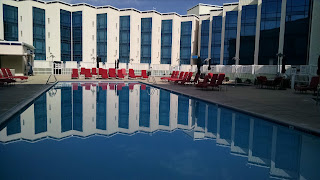 After packing up our room, we headed down to the casino.  We had an hour or so before the buffet opened and I jumped on a Fu Dao Le and managed to pretty much break even.  Given that it was 10X, though, it meant I was quickly getting a lot of resort credit.  While I was gambling a lot, my bonus rounds were pretty crappy and I really wasn't gaining anything at all.  It was entertaining, but not rewarding. 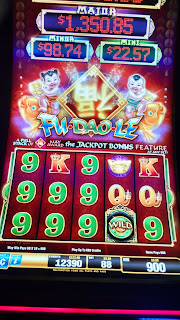 Just before we hopped into the buffet line, Shari bummed $20 off of me and went to one of my favorite Fu Dao Le machines and was rewarded with this winner:

I love the Oceano's buffet on a Friday morning.  They put out some of the seafood that they are going to be serving later in the day and they have the best seafood ciappino.  I could literally live on the stuff.  We wound up eating for $4.10 because of all the comps we had just earned.  Roughly a $30 savings.

Shari got tired of watching me eat and went out and gambled some more.  I probably made a spectacle of myself because I was like a bottomless pit.  Eventually though I waddled out and at that point that is where my luck suddenly ended.  It was as if all my good fortune was suddenly transferred to Shari.

About an hour later I was down about $20.  We went over to the Peppermill and I tossed another $40 away.  Rainbow was even worse and I dropped another $80.  Granted I was making good comps but it was as if the operator of the casinos were like "tighten the screws -- no more wins"  I wasn't getting anything

Disgusted and suddenly down about $100 or so, we headed west.  I had a bunch of food coupons and a heavily discounted room at the Elko Red Lion.  I love going out to Elko.  The drive from Wendover to Elko, while some would consider boring, I find fascinating and it always goes by pretty quickly.  Before we stopped in, though, we went to the California Interpretive Trail Center, which you can read about here.

Shari isn't a fan of Elko that much but I was hoping to do some hiking or site seeing the next day, but the weather really didn't cooperate.  I still want to go back to Lamoille, but Shari clearly isn't much of a hiker.

Either way, the room was super nice and for $50 they treated us really nicely.  They also gave a $12 food voucher and between the two of us we had $12 in free play.

My luck continued to tank and while I was having some fun I was throwing away good money after bad.  Shari's continued to hold up.  She jumped on a Rumble Rumble machine by Ainsworth (she left me at the buffet to do this) and hit paydirt with a $2.50 (max bet): 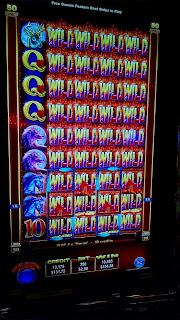 I ponied up for the buffet and Shari ate off the menu (that is nice about the Red Lion since Shari isn't a seafood person, the Friday night buffet is next to worthless for her).  I was still pretty full from the other buffet, but I did pretty good for myself.

We wound up crashing around 10:30.  Shari wouldn't let me crank down the A/C so I boiled all night.

In the morning, I went for my exploratory run around the north east side of Elko, which you can read about here.

After cleaning up and packing we hit the Saturday morning brunch buffet.  The coupon they had given us made this virtually a 2-for-1 buffet.  Their buffet is a lot tinier than Wendover's but it was still good.  Over the two, I'd rather have Wendover's, but it wasn't crowded so I had them make me an omelette.

We talked about going hiking or going downtown but Shari wasn't feeling terribly adventurous.  Also there were looming storm clouds over the south of Elko.  So we headed back east towards Wendover.  We did stop off in Deeth, which you can read about here.

We rolled into Wendover just after 3pm.  We swiped our cards and got onboard with the 10x comps again.  I was down a good chunk of change and I hadn't played anything in Elko.  Tentatively I stuck some money into Fu Dao Le and got -- nothing.  I mean at this point it wasn't even fun anymore.  I tossed a few more bucks into various machines and it was like I couldn't catch a break.  Absolutely nothing....

We had gotten some free tickets to see Chris Cagle.  Shari thinks she had heard some of his music before, but I really didn't know his stuff.  I didn't want to lose any more money, I wasn't hungry and we had a good three hours to kill before showtime.  For those not in the know, Wendover is an exceedingly boring place if you aren't gambling, sitting at the pool or eating.

I wound up giving the tickets to a couple we had met on Thursday night from Amarillo, Texas.  They seemed really excited to get them so I am hoping they were put to good use.

Well, I came home broke.  What wasn't spent on gambling was put towards tips and other incidentals.  Gambling-wise, this trip flat out sucked.

Shari was the big winner.  She was able to give me back my $20 and have two Benjamin's to put away.  She was ecstatic Normally it is the reverse situation but my luck was bound to change after the good runs I've been having there...  On this trip, however, my luck was so bad I couldn't even win a few bucks at video black jack.

I was also able to knock out the California Interpretive Trail Center, which had been on my list of things to see for quite some time.  I also got to check out Deeth -- which was cool, but a bit of a letdown especially compared to Metropolis.  I also came away with a huge understanding of what the early settlers on the California Trail felt like when they crossed through this section of the country.  I can't imagine what it would've been like to have your kids in tow with everything you own in a covered wagon walking across this rugged land.

Not sure when the next Nevada trip is.  This one was bittersweet and left a bit of a bad taste in my mouth.  There are still some areas north and south of Elko I want to check out, so you can count on me wanting to explore. Also the Basque Festival is coming up on the Fourth of July weekend which is definitely tickling my curiosity.
Posted by Eddie Gaul at 3:38 PM