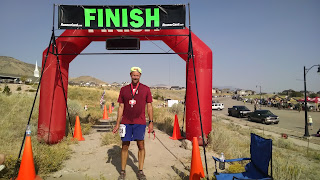 
First off, I have no Garmin map or mile splits.  As some of you may know, I have been having problems with my (new) Garmin 305 and I thought I had resolved them.  When I was at the race I brought my new Garmin with me and as I was waiting in line for the bathroom, I turned it on.

Despite having been charged 5 hours the previous day I had no power on my Garmin.  So it will definitely be going back to the Garmin folks for repair / replacement.  I was really bummed and sort of disconcerted.

Either way, I needed a race to do.  I haven't done one in a few weeks and my hands were getting shaky from the withdrawal symptoms.  There were a bunch of massive downhill halves this weekend but I tend to shy away from them.  They often yield fantastic times, but they also can lead to injury.  With a packed fall schedule and a marathon in about 2 weeks, I am sort of avoiding the massive downhill races.

So I chose the Herriman Hold'em Half Marathon.  This race is part of a series around the Herriman Utah area.  Their courses tend to be tough -- with lots of hills.  Herriman is located in the southwest corner of Salt Lake County and my travels rarely take me there.  However, it is a growing suburbia with lots of development and homes.  I suspect the trails that I was on today will some day be houses in the not too distant future.

Hopefully someone will buy the land and preserve it.

I signed up for the race on Thursday and mostly set out to do something fun and different.  I knew going in this race was going to be tough but as usual I completely underestimated it.

I rolled in around 6:30 and got my shirt and bib pretty easily.  By the time I made it back to my car they were calling people to begin the race, which started at 7.  I had just enough time to use the bathroom and figure out I was SOL with my Garmin.

There were approximately a 100 runners or so.  A good majority of them were military folk who were in full regalia and full packs who were walking half of the half in full gear.  They were awesome and you could easily spot them in the distance with their marching "hoorah's" and their flags. 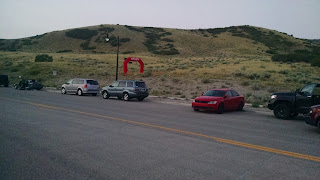 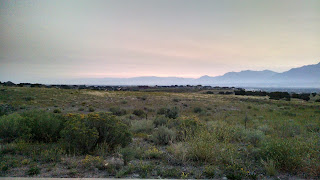 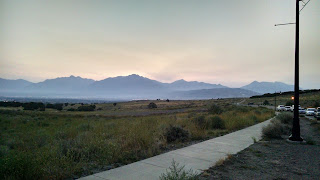 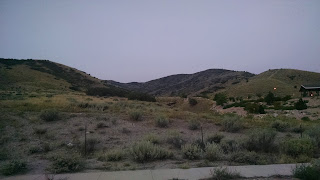 The elevation of the race is somewhere around 5000 feet, with a low point of 4850 and a high point of 5300... so yes there were hills.  I looked at the hills in the distance and begin to worry.  What had I gotten myself into?

I started off fairly conservatively but almost immediately I was breathing pretty heavy.  There were some rolling hills and gentle incline on the smooth dirt trail.  The ground surface reminded me of some of my runs in Wendover... the altitude and the hills were just tough.

The first few miles I knew I was going to struggle.  The gentle ups and downs were taking a toll on my legs and I just couldn't settle into a groove.  The few runners I was running with were suffering too and I saw quite a few runners taking walk breaks.

There weren't any mile markers and with my Garmin not working I generally didn't have a good sense as to how far I had run or even what my pace was.  I was 100% running by feel.  I asked a few people how far we had run and it always seemed like I was a mile or two more than what they had on their Garmin.  They did mention that the water stations were roughly 1.5 miles apart and when I ran into the first one I felt like I had run 3 miles, not 1.5.

The volunteers were fantastic and the stations were well stocked with water and Gatorade.  There wasn't a lick of shade on the course and with the sun blazing down, I was ready to drink a gallon of the stuff.

I wound up running pretty well up until about mile 5.  At that point, it is roughly a 400 foot climb over the course of a mile.  While there wasn't an identifiable hill it was just a steady grind up.

Since this was a two loop course and I got to the halfway point, I was pretty trashed.  I couldn't believe that I would have to suffer through the course again.  It was stunningly beautiful with some awesome views of the Salt Lake Valley but it was just relentless on the toll it was taking.

The hills, the loose rocks, the switchbacks; it was just difficult running.  There were two steep drops.  I saw some brave souls blaze down them, but I held way back and sort of side-stepped my way down them.

The trail is primarily a dirt bike trail with packed dirt and rocks.  There were some sandy areas and semi-technical terrain.  My Brooks Adrenaline shoes were up to the task though despite them not being trail shoes.

The last 3 miles were a death march and as I made the ascent back to the start I was doing a fair share of walking.  My legs just felt like rubber.  I did try a gel around mile 7 (I think) but that didn't seem to help much. 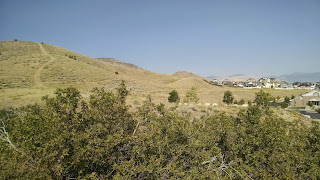 I was so glad to cross the finish.  There was nothing left and even with the finish line in site, I did a little bit of walking.  I just didn't have it. 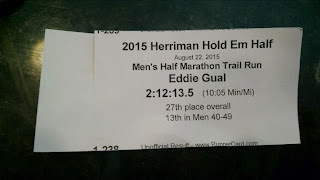 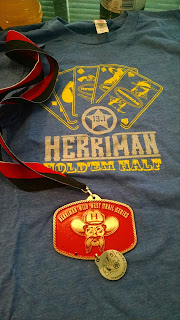 I would certainly run this race again.  It was well organized and I liked the course a lot.  It was also insanely warm and challenging.  For the $50 I paid for it, though, it was a welcome event that I didn't feel gouged for.

The post race food consisted of chocolate milk, soda, breads and watermelon.  There was plenty to go around and the selection was actually good for a low budget race.  Props to the organizers and volunteers as well.

The finisher's medal is actually pretty big.  It looks like if you do their other races you get a dog tag to attach to the medal, so mine has two empty slots.  I like the design of the t-shirt but it is a cotton t-shirt, which I generally won't wear for anything but bumming around the house with.

I wasn't terribly thrilled with my performance.  This half marathon felt more like a marathon to be honest.  However, checking around with other people indicated that if you were a sub 1:30 runner, you'd likely add about 10 minutes to your time.  If you were say a 1:50, most were crossing the line in 15 - 20 minutes more than they usually do.  So my time isn't too far off and actually I was surprised it wasn't worse.

I am definitely not a trail runner and this forced me to use some muscles that I normally don't train.  It is always good to shake things up and I really enjoyed the scenery and low key atmosphere. 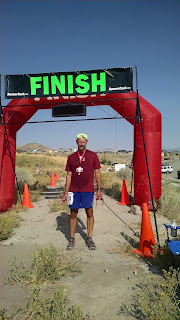