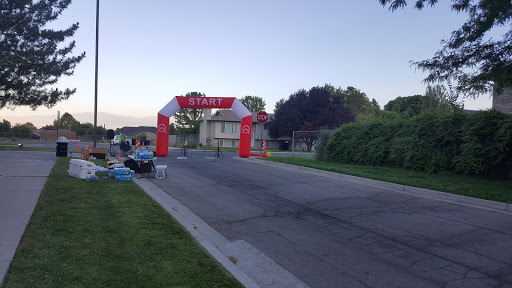 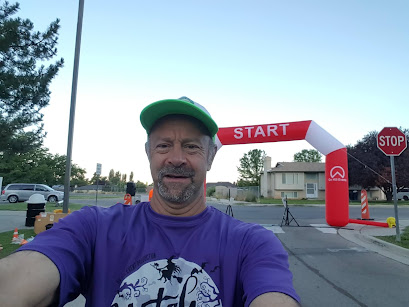 Sometime before this whole Covid-19 mess, I signed up for the Provo Canyon to Pleasant Grove 10K Race (PC2PG).  I got a pretty sweet deal around Thanksgiving time -- I am thinking around $25.  I had run the inaugural year and felt that it was a pretty good race.  It was a place I hadn't run before and I thought the bike trail course was really nice.
In fact, last year, I won the 10K race, so I definitely wanted to defend my title (no pressure).
So to support a fledgling race I signed up for the 2020 edition and made my way down to Utah county to run the Murdock Trail once again. 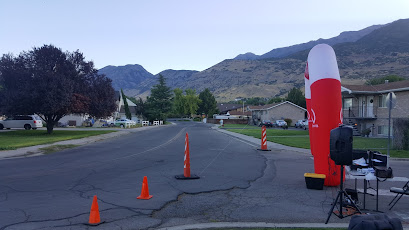 I rolled in at about 7:15 for an 8:15 start.  I could tell this race's attendance was much bigger than last year's.  Definitely less parking (but it wasn't a problem to find parking).
Packet pickup was a snap and I wound up warming up and killing some time before the race's start.  Due to Covid restrictions, we had a staggered start (we were starting with the 5K).
Normally everyone starts at once and you jockey for position.  However, this time we had a staggered start.  We were started off in spurts of about 20 seconds.  It definitely helped to reduce close contact with others. 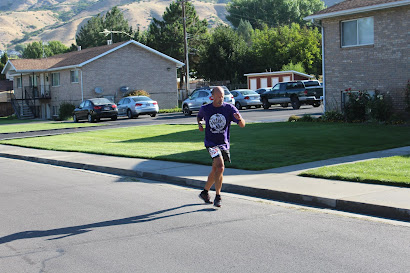 The first mile is definitely a gut check.  I had forgotten how hilly it was.  It isn't a massive hill but it'll definitely slow your first mile down.  I was shocked to see the first mile flash on my Garmin in 8:44.  Was I running that slow?
I doubled down on mile 2. I didn't even realize that there was a gentle downhill (I realized it on the way back, however).  I was pretty excited to see mile 2 come in significantly faster.
The race -- after a brief residential stretch, is run on the Murdock Trail.  It is a multi-use bike trail that is very wide.  It was being used by other runners, cyclists, walkers and skateboarders.  It wasn't terribly busy but with the half marathoners returning from their run as well us, it was busy.
There were 2 sections of road we had to cross over (we had to re-cross them on the way back) but other than that, we were pretty safe on the bike trail.
Mile 2 to 3 was a challenge.  The race had thinned out at that point and I was feeling pretty warm.  I was working off of a young man (probably half my age) for most of the race (he pulled ahead around mile 4) and I just didn't feel like I had endurance this time.
There was an aid station at the 5K turn around and at the 10K turn around.  I was carrying a small flask with water in my shorts pocket -- simply to reduce my risk of covid. 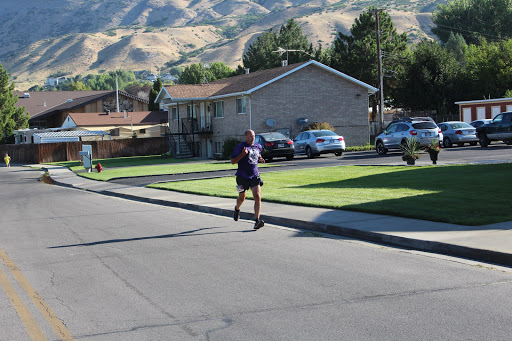 The course came up short last year (6.07) and this year, my Garmin buzzed for the 3rd time right at the turn around.  I was hurting, so I didn't mind, but some people's Garmin's had 6.10.
I kept telling myself to hang on (my hamstring has been sore and it was flaring up mid-run).  I knew I could push the final mile if I had a little bit left since it was going to be a downhill.
There were a few 2 hour half marathoners to work off of, but no one else.  There was no one chasing me down and the other 10K runners were a solid minute or two ahead of me.
I kept pushing though, mainly I wanted to beat last year's time -- which I wound up doing.  The final half mile is a fast downhill and I certainly took advantage of it.  I wanted to get in under 52 minutes and sure enough, I squeaked by! 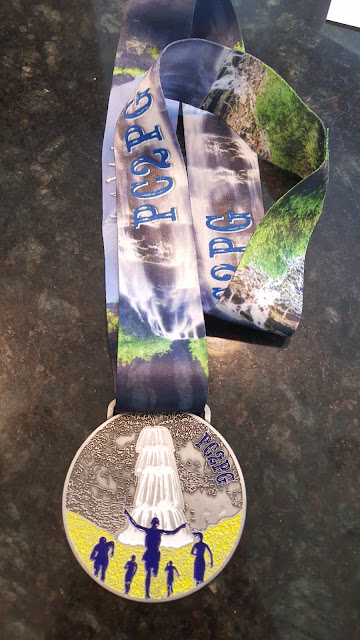 Race finishes are definitely subdued these days.  I knew quite a few people and as best as I could, I said hello to them.
They had a medal for you in a bag as well as some snacks.  I had stashed my own drink at the end.  Sometimes a bottle of water isn't enough and with restrictions in place, I might've needed more.
I was pretty worn near the end.  I had expected to run this faster but I was humbled by this course.  It was more hilly than I remembered.  I still loved the course and I've been meaning to drive down there and explore the trail some more (as well as get some photos of the course).
They were out of t-shirts for me, so at some point one will be coming.  The medal was nicely designed and I loved the lanyard.  For the price I paid, I was happy with my experience.
My performance was solid on this one.  Again, this one had some gentle hills, so my time was slower than a flat one.  Also, I am happy to report I beat last year's time -- not by much, but at least some.
I would definitely do this one next year especially if I catch a nice deal on it..

Posted by Eddie Gaul at 2:11 PM No comments:

This Summer in Running 2020 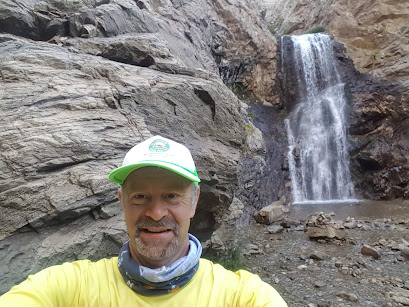 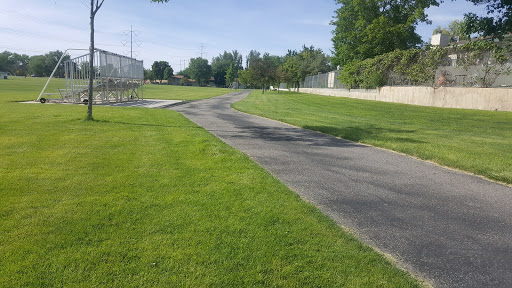 Updates on Running
It's been a long, hot summer.  The weather systems pretty much flipped the switch around July 1st, when we lost most of the cooler June weather and it turned into 90F+ degree days.
I always intend to run in the morning but forcing myself to get to bed early and then subsequently get up early is a challenge.  I am a total creature of habit and I like to go to bed after 9 PM and my alarm has been set for 5:55 AM for a very long time.  Switching it to 4:XX AM is just not in the cards.  So it makes summer running painful for me.
So that means I usually work throughout the day, eat dinner, lay low for a few hours and then start my run anywhere from 7:15 PM until 8PM -- depending upon how hot it is.
I am still logging anywhere from 3 to 6 miles 6 days a week.  I am also getting in a fair amount of weekend hiking as well for cross training.
I try to get in a semi-long run on the weekends followed as well as one "quality" workout.  Either quarter mile repeats or hill repeats.  Most of the time I've been nailing my goals as far as doing that.
I pretty much ended my 10+ mile runs at some point in June.  It got too hot and the runs got too humbling and resulted in me having heat issues or just feeling totally wiped for the rest of the day.  Plus I really don't have any half marathons planned until late fall. 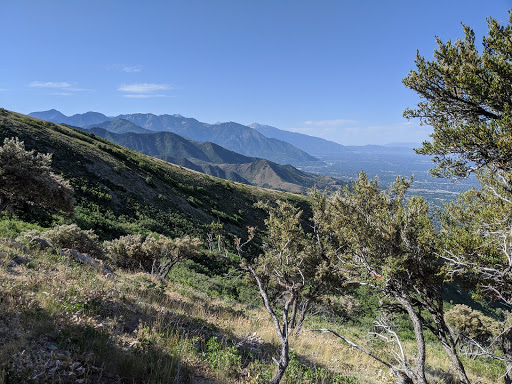 With Covid-19 still in full swing the race scene is more or less at a minimum here in Utah.  There are races however.  But a lot of my favorites -- often community events tied with festivals are more or less postponed for the year or have turned virtual.
I am not a virtual runner.  I'll do one for charity I guess but I have a hard time treating it like a real race.  I've got more medals than I know what to do with, so earning another one doesn't do much for me.
But there are races... and instead of having a bunch every weekend, you more or less have one to choose from.  So for someone who really enjoys racing, it's been a challenge.  But in another way, it has been good in that I can focus on training and being really ready to perform.
I've been mostly choosing small races and avoiding putting myself at risk for large events.  Also races that advertise themselves as "covid-aware" are usually picks in my book.  I am also registered closer to the day of the race, just in case I get sick OR the race is unceremoniously canceled.
But there is a definitely an element missing from the races.  You basically show up, run and get the heck out of there.  I am just happy some races are back though. 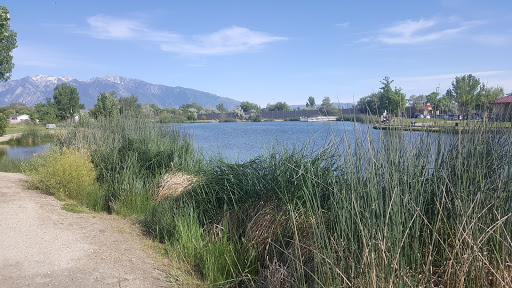 Weight Loss
Since the pandemic began, I've really worked on my diet.  It has been a challenge for my and I've written about it before.
I am happy to report that I've gone from 189 (or 190) pounds to about 172-174.  That is nearly a 10% drop.
I feel better and without too much additional training (I am actually running less these days) my times have come down.
Some things that I did to drop the weight: