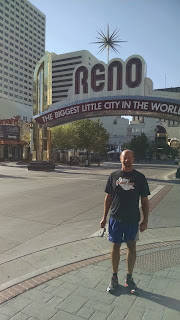 While we were staying at the Peppermill Reno, which is an "off-strip" hotel / casino, I definitely wanted to make it downtown to see what Reno had to offer.  Normally when you stay at one of the off strip casinos you tend to stick around the same resort and don't really venture out.

I definitely wanted to venture out.

Having never been to Reno before I studied the maps on how to get to the downtown area and on Tuesday morning I through on some running clothes and started to head north along Virginia Avenue.

First off, Virginia Avenue isn't a very nice road to run along.  There was some rush hour morning traffic that wasn't too bad, but it wasn't that great either.  I definitely wanted to get off Virginia Avenue and try to take a more runner friendly route downtown.

I quickly ducked down a quiet looking street and hoped it would take me closer to downtown.  I soon ran into Virginia Lake, which I wound up running around on Thursday.  You can see a bunch of photos here.

I proceeded further north until the road dead ended.  I am not sure which road it was, but I figured I'd play it safe and jump back onto Virginia Avenue.

I could see the downtown area coming closer and there was even another runner darting along Virginia Avenue, so at least I wasn't 100% alone.

After another half mile or so I was thrust into the downtown area.  There were a lot of banks but behind them I could see "The Strip"  There was a fair amount of construction happening as well which made navigation interesting... luckily I had my phone with me and I could navigate around pretty easily: 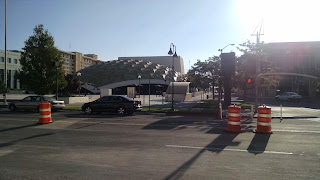 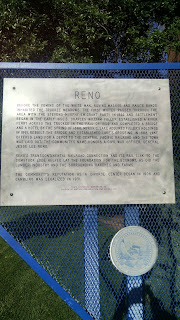 I've never been to Reno before so to be able to experience all this first hand was enthralling.  I was really excited to see this legendary city.  I had read a lot about it and I sort of know what is going on downtown but I hadn't had a chance to experience it.

Another few blocks, I was darting amongst the casinos and of course the Reno Gateway: 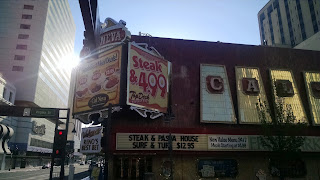 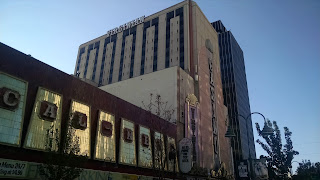 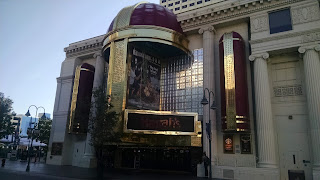 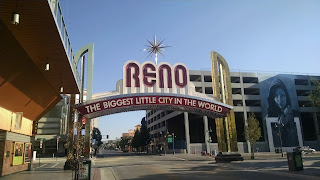 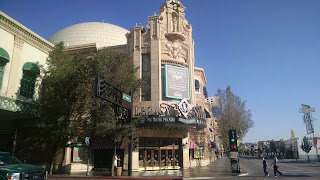 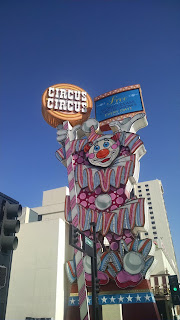 The nice thing about casinos is that they are always open and usually have super clean bathrooms.  When I run in the morning, I tend to use them and thank goodness I was able to head into the Eldorado for a break. I certainly looked out of place in my shorts and sweaty shirt among the early morning gamblers.

I was under the impression that the downtown area was filled with bars and tattoo parlors and in general not a nice place to be.  After experiencing it, I would say that there are definitely some iffy areas -- there were homeless and definitely gritty businesses, but I didn't feel uncomfortable or unsafe at all (even when returning at night).

It was like a mini Vegas, although there were a LOT less people around.  In fact, many of the casinos were virtually empty -- where as the Peppermill was always pretty busy.

I wound up running a few circles around the area before exploring the Truckee River bike path.  You can see a bunch of photos from a subsequent run of the trail here. 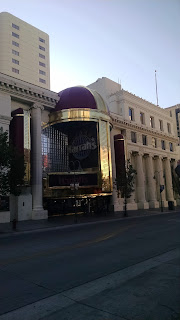 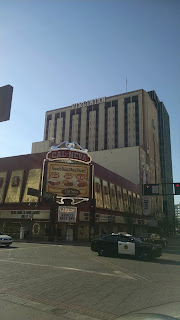 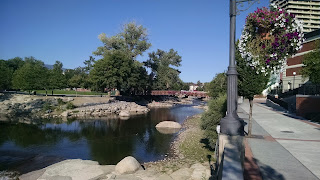 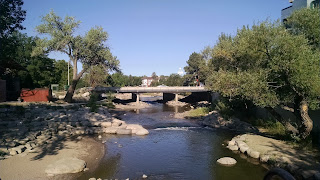 Downtown Reno was certainly an interesting place.  Running on foot always gives you a different perspective of things and when I later returned the following two nights, I was able to navigate my way around, despite the construction.

By comparison, Vegas is a lot more crowded and stressful.  The casinos in downtown Reno looked like their glory had faded quite a bit, but still had a certain charm and class of their own.

There is also a vibrant business culture downtown, as I saw lots of people in professional garb going to their jobs in the banking and legal sector.

Overall, this was one of the best and prettiest runs I did while on my trip to Reno.  I figure I did about 7 - 8 miles throughout, so it was definitely a solid workout.