Some time before the start of 2020 I signed up for the Legacy Midnight Races.  It is an annual tradition of mine to do in the dead of summer.  It is held late at night (10PM is when the half starts) and it usually is a late night where I get home after 1 AM.
When Covid came around, the race was ultimately changed from a night race to a morning race and now sported a full marathon (along with the traditional half, 10K and 5K).
I am pretty much done running halves in the dead of summer.  I've learned my lesson too many times that long distance races and the heat don't agree with me, so I plunked my money down for the 10K.  I respectable distance that includes speed as well as endurance.
At the start of the year I full expected a night race, instead I got a morning one.

I rolled into the Legacy Events Center in Farmington UT around 5:45 for a 6:30 race.  Packet pickup was a snap.  The full marathoners had already started and the half marathoners were lining up.  With about 40 10KM runners, it wasn't a big deal to grab my bib and get myself ready for the race.
Around 6:25 (for the 6:30 start) we lined up.  Most people were wearing masks while we kept about 6 feet away from one another.  The race director began sending us at about 30 second intervals and I was off and running along the Legacy Bike Trail.

The bike trail is a multi-use, paved trail that mostly serves runners and cyclists.  I've done about a zillion races on it.  It isn't the most exciting place to run, but it is flat and with a light amount of runners in attendance, it was easy to maintain safety protocol as far as avoiding others mid-run.
I started off at a decent clip.  I hadn't done much of a warm-up: mostly some striders and random leg swings.  I figured with the warmth of the day and it being a low key race, I'd just use the first mile to sort of warm-up and go from there.
Once again, I had started in the back and with each runner spaced at about 30 seconds apart, it nice to have some targets to work for in the early mile.  Unfortunately, I was also a target as two speedy young runners flew by me.
I wound up passing a little more than half a dozen people by the time I reached the turn around.
At first I felt like I had gone out too fast but I quickly settled into a nice pace that I felt comfortable holding.  My goal was to run in the low 50's and do about an 8:25 or so pace.  I am a fast starter so it wasn't too surprising to see the first 3 miles go below that pace.
The turn around came just after 3.03 miles.  Some races I am glad to have it short but other races, not so much.  With me trying to hit a rock-solid 10K I was a little disheartened.
It seemed like there was a bit of a head wind on the way back, so if there was any wind at all, it was blowing from the north.  There were a few runners ahead of me, in the distance, but there weren't any closers coming from behind.
I did what I could to maintain the pace, but mile 4 and subsequently 5 I really had to dig deep.  I hadn't seen anyone in my age group but it was hard to tell with the staggered start times.
Around mile 5 I knew I was gonna have a good race and I pushed a little harder.  At this point there were some 5K runners to work with and get some cheers from, so my motivation was a little higher.  Again, there was no one behind me or in front of me to try and take on.
I flew under the finish line just a hair over 6 miles and a time of 51:09.

After finishing, I was handed a bag which contained some snacks, an orange, and a bottle of water.  Again with Covid, you were urged to disperse from the finish line as soon as possible.
I wound up socializing a bit but the number of runners who had finished were pretty limited.  Sort of anti-climatic after a decent race.
The medal and t-shirt are forthcoming on this race -- as well as any age group awards.  In a way it was nice to go home and not bum around waiting for awards but the whole "race" atmosphere kind was lost without all the post race buzz.
Yes, the course appears to have been short.  My 51:08 gets translated to about a 52:32, which is a lot faster than many of my recent 10Ks.  Once again, another nice performance for myself and hopefully more good things are around the corner.
Hopefully this race will return next year in a night format.  But overall, for the price paid on this race, I was happy with my experience. 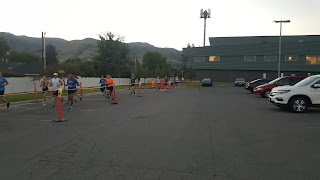 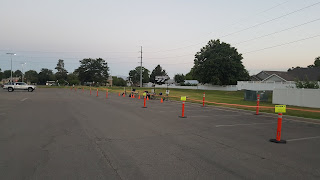 Every summer -- at least for me -- brings the opportunity to the Handcart races up in Bountiful.  They are put on by the local recreation center in tandem with the celebration of Utah's settlers who arrived with all their belongings on a handcart -- hence the name, Handcart Races.
Normally, there's be a lot more going on at the park and the race would've been more heavily attended, but with Covid-19 wrecking havoc on the race scene, social distancing, masks and extra precaution were in order.
Masks were required for pre / post race as well as packet pickup. 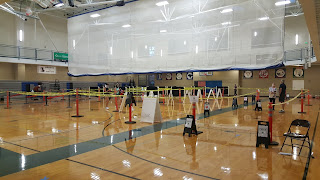 I rolled into the race just shy of 6 AM.  I got an opportunity to see the half marathoners start off, which is always nice, as it gives me a chance to wish those that I know well wishes.  I've done the half a few times and know that the half -- in the summer -- just isn't my cup of tea.  I've died so many times in the last 3 miles of it that I prefer to do the 5K.
Packet pickup was a snap.  Masks were mandatory and people were pretty respectful of that.  Since I was there early, I didn't really get that close to people and I was back outside in no time at all.
I wound up doing some drills and doing some easy running to kill time.  Around 6:50 (race start was at 7 AM) I made my way over to the starting line.  They had the starting line cordoned off for about 10 people per segment.  To play it safer, I went to about the second to last starting area and waited for the race to begin.  I had a good 5 minute wait before the race started. I made small talk while wearing a mask and keeping a distance from the other 8 or so runners in my block.
It took a few minutes for the other runners ahead of me to start.  But it was definitely interesting to start in the back of the race. Normally, I am up in the first third of the starting area.  I hope I wasn't hemming myself in, but with the fastest runners in the front and only lots of 10 in front of me, I  didn't have that problem at all with this race.
This race is entirely residential.  It isn't the most exciting course but it starts off with a moderate downhill and once you turn the corner at about mile 1.25, it is grind back to the start.  It forms a loop around town.  Normally, the course measures about 3.07 to 3.08 but it came up fairly short this time. 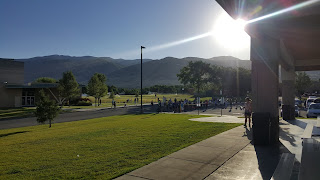 Since I haven't raced since March, this 5K was pretty much on my "A" list.  Plus, being about 15 pounds lighter, I felt like I was ready for a great race.
I blasted out the first mile and since I had a downhill I knew it was going to be fast.  I hit a 7:41 and was worried I had gone out too fast.  I still felt in control but it had been a while since I had ran that sort of pace. It was fun to start in the back of the race and work my way forward.  There was some concern about inhaling people's exhales, but I tried to stay as far away as possible and run off to the side. 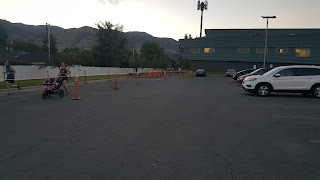 Once I tuned the corner to head east and finally another right to head back south to the starting line I knew the race had begun.  Here, my pace definitely takes a hit as I see a slight incline and then another grind back to the top.  It looks daunting but it isn't that bad.  I dug down deep remembering all the hard work I had put into my diet and my training and quickened my stride as best as I could.
Mile 2 was a blur as was mile 3.  I just reminded myself to keep putting one foot in front of the other.  I did panic when I saw an 8:30 flash on my watch as I crossed the 2 mile marker.  Looking at previous results though, that mile is traditionally pretty slow for me.
I was running solo by mile 2.75.  Occasionally a speedy half marathoner would fly by me (they had an hour head start) so it was humbling to have one of them cruise effortlessly past me.
Finally, I hit the home stretch and I put everything I had in the last .15 of a mile. 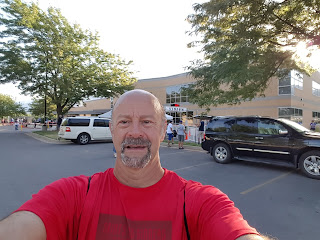 I was really hoping to go sub 25 minutes on this race.  So I was a little disappointed with my time.  On the other hand though, I absolutely demolished my time from last year and even this February, by a good 50 seconds.  Once I saw that, I was a lot more excited about my time.
After finishing, I really wanted to keep running another .07 of a mile, just to make it official with my Garmin.  But they were handing out medals and I didn't want to be rude by sprinting through the finish area.  The course, for whatever reason, measured short with my Garmin, but I know I've done it many times before it is measures at about 3.07 or 3.08.
The race was well organized and quite a deal.  I could've run this virtually, but opted to run it in person.  Back when I signed up for it, Covid was a big deal but it hadn't escalated into what it is today.  So I had quite a bit of anxiety about how this race would go.
I felt good about it and kept my distance from people.  Although I wish there hadn't been as many people while running.  Again, I tried to limit my exposure to others but you can only do so much. 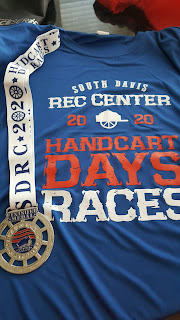 The race was a bargain. I paid around $15 for the race.  I got a cool t-shirt and huge medal.  I placed second in my age group, but I didn't stick around for awards.  I think they are post race pick-up, so next time I am in the area, I'll try to swing by.
I didn't indulge in any post race food.  There seemed to be a lot of people in the area and I was doing my part to social distance.  I always bring my own beverages / food so it wasn't a big deal.  It looked like they had ice cream, bananas and bottled water.
I am very pleased with my results and it shows I am trending in the right direction.  It gives me hope I can get back down to some more competitive times.  It is definitely easier being 15 pounds lighter than February.
Posted by Eddie Gaul at 11:28 AM No comments: