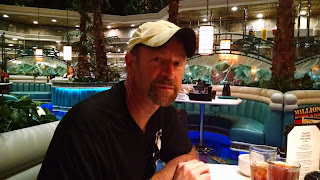 This post is a continuation from part 1, which you can read here.

This was our first full day in Reno and I was really excited about getting out and seeing the sites.  Naturally I was up early and started my day with a run that lead me to downtown Reno.  You can see pictures here.

After coming back and realizing that Shari and her mom were going to be a while in getting ready, I donned a swimming suit and headed down to the Peppermill's awesome pool 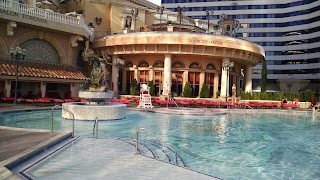 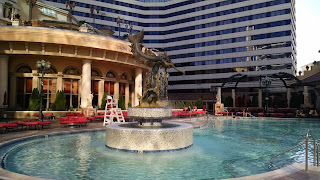 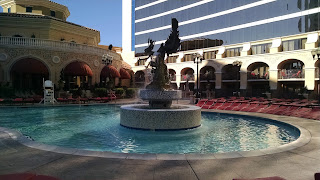 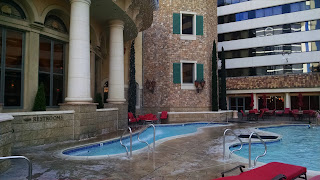 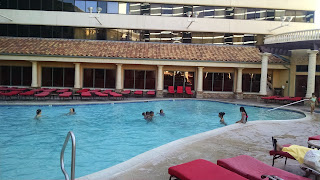 Generally in the morning the pool area was pretty vacant of people and the sun was partially blocked by the eastern side of the hotel.  It was also warm enough where I wasn't freezing.  In short, it was perfect weather for idly swimming in the pool or relaxing in the hot tub.  Just about every day I was there, I wound up meeting / talking to someone.  I guess I have that gift of gab.  Interesting to see how many people were from California and the Pacific Northwest.

There were two massive pools and a handful of hot tubs.  The pools definitely were more busy in the evenings, particularly around 5-ish but at night the winds would pick up and people would take off.

By the time I made it back to my room and cleaned up, Shari and her mom were pretty much ready to eat.  I was starving and so we hit up the only place we ever ate for breakfast:  the buffet.

We found that this was the best deal for breakfast.  With Shari's mom senior discount -- which entitled her to a two-for-one buffet.  We tried to time our arrivals to getting in at the breakfast time, but still get there when the better stuff came out for lunch.

I still preferred Wendover's breakfast buffet to this one, but this clearly had a larger selection of food.  They also had cheese blintzes which I devoured and some great french toast.

After eating we wound up gambling for a bit to let our food settle.  Again, no one had any luck at the Peppermill and it was a costly lesson to learn before I wound up taking my money to other casinos.  In my opinion, the machines were simply very tight and I was happy to leave.

After the museum jaunt Shari and her mom had no interest in seeing the government buildings, so I let them explore the Carson City Nugget casino.  The Nugget is definitely older but I found they had the loosest machines of any casino we went to.

While the women gambled, I wound up hustling and got a bunch of pictures in before returning to the Nugget.

I was pretty gun shy about gambling, having taking a beaten at the Peppermill the past twenty four hours.  However, I figured I was "off-strip" and tried a twenty in a Money Tree.  I quickly got a bonus and managed to double my money.  I also played some Robin Hood and again did well on that.  Finally I was winning! 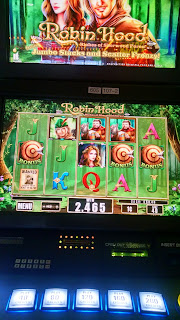 They even had some coin-based video poker.  When I hit a full house on my first hand I expected a ticket out but was surprised to see a slew of nickles pop out.  In fact, we all had good luck here.  I wound up walking around with a pocket full of nickels for the next 24 hours though.

Being we were hungry we decided to head on down to the Casino Fandango.  This is on the south side of town and easy to find, but there was a lot of traffic being that it was right around 5 o'clock. The reports I had read said this casino was lively, had good food and was fairly modern.  It hit on all points.  This casino was fairly large and had a good offering of both old and new games.  I didn't have any luck on their Fu Dao Le's but I did find several Multi Strike Poker games that actually turned out to be quite profitable. 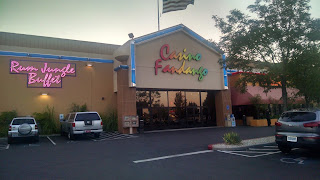 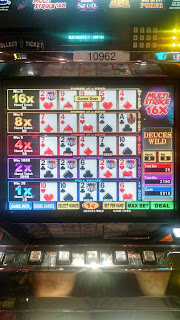 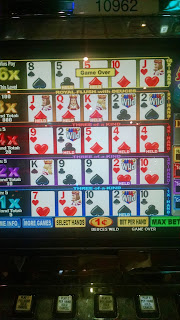 Their buffet wasn't open but we did wind up eating at their grille.  I had a high-fat meal of fried fish... delicious: 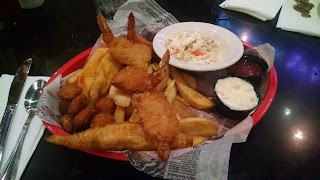 I completely lost track of time as I was playing the Multi-Strike Poker.  Simply put, I could play 25 cents at a time and pretty much remain even or make a small profit.  Shari wound up giving me her player's club card so I could get the minimum amount of points for her to get some free play.

We wound up killing some more time before making a drive around Reno at night.  Since I had gotten the lay of the land that morning I knew exactly where to go.  I was really surprised with how empty the streets were: 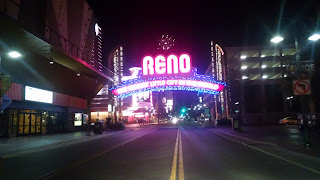 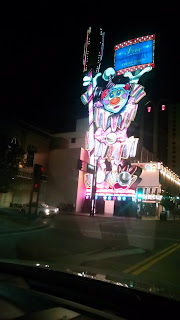 I wound up putting a bet on the Dodgers / Nationals game and wound up losing (of course).  So I wasn't too happy with my run of luck for the day. 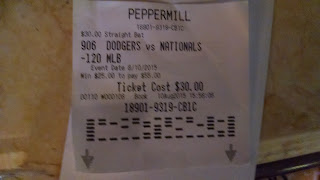 Stayed tuned for the next installment...
Posted by Eddie Gaul at 5:17 PM