In the morning, I did a whole lot of nothing.  I woke up late and I definitely needed a rest day.  I had been running the previous week and I had run the previous day.  After all, part of vacation is taking a break and I sure needed one.

That just meant more time for the pool.  It was another glorious day and I got to spend some quality time in it while Shari and her mom got ready.

What was neat about the pool is the amount of statues surrounding the area.  My favorite was that of (presumably) Hercules: 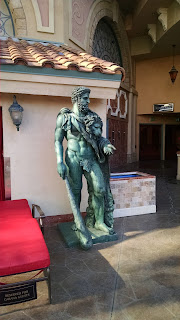 Why they put a Greek statue in an Italian-themed resort, I'll never know, but it was cool.

After eating yet another good Peppermill buffet we decided to hit up Virginia City.  You can read about our experiences here, here, and here.  It was a hot day and I certainly got a workout pushing my mother in law in her wheelchair.  Virginia City is NOT a flat city and I parked "in town"  Pushing a wheel chair at about 6000 feet of elevation was a lot of work -- but I did it.

I was really tired of eating at the Peppermill buffet and I was itching to try the Eldorado Buffet in downtown Reno.  I had passed it on my way to use their bathroom on my run on the day before and the price seemed reasonable and the buffet looked big.

Shari's mom was tired and was going to go to sleep and wasn't terribly hungry.  I wasn't hungry either since we had ate so late.  We got downtown and I managed to park and I found out that the buffet closed at 9pm.  It was a little after eight, so Shari and I got our player's club cards and entered the buffet.

Overall this wasn't a Wendover buffet, and I'll be honest for a large buffet their selection wasn't that great. We weren't terribly hungry so that sort of worked out.  This was probably the first buffet in a while where I didn't feel like I ate my money's worth (and that's my fault).  The food was pretty good though and they did have an excellent minestrone soup that rivaled that of Olive Garden's.

Afterwards Shari and I tried our luck in their machines.  I found a lonely Fu Dao Le and quickly hit paydirt.  I managed to get a $111 red envelope jackpot! 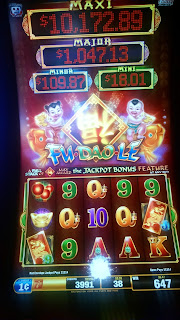 I also wound up catching a few bonus rounds.  At one point I had over $150 in the machine.  Finally! I was winning!

I wound up cashing out with over a hundred.  I played some Money Tree but didn't get anything as a result of that.

We circled the casino a few more times and got our parking validated (sadly that seems to be a requirement in the downtown area).

We then headed over to Harrah's where I played some more Fu Dao Le.  I got a few palty bonus rounds but did get some play for my $20.

Overall, I was very impressed with downtown and I definitely liked the gambling more there.

In the morning I woke up and did my Virginia Lake Run.  I also of course hit the sauna and pool for a quick dip.

We wanted to get an early start that day.  We weren't sure how long it was going to take to drive around Lake Tahoe, but I certainly wanted to wait until the morning traffic subsided but still get there and get back in time.  We wound up eating at the Peppermill buffet once again and I think we were on the road just shy of noon.  You can read about the trip around Lake Tahoe here.

Also we did stop by Harrah's on the south side of the lake and I won a minor pick'em bonus on Fu Dao Le for about $90.  I also won another $20 on a Cash Man, after nabbing a pretty nice bonus. Nobody else had much luck though. 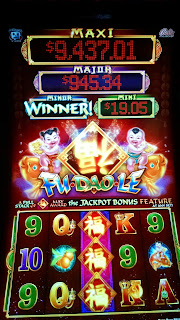 On the way back we decided to hit up Casino Fandango one more time in Carson City.  I had read online their buffet was good and we had had a good time there the last time we were there.

The buffet was actually quite good -- especially for a smaller casino.  I got specially made spaghetti and they had some premium seafood available.  Nice touch.

I did all right gambling there.  Fu Dao Le was definitely not my friend there but the video poker was.  We stayed pretty late on account everyone was having fun and we were actually getting some entertainment for our gambling money.

Day 6 marked the end of our trip in Reno.  I made someone's day very happy when I realized that I had a 2 free buffet pass in the coupons they had given us when we checked in.  I wound up buying the guy behind me in line his meal.  To say the least he was ecstatic.

I did manage to get in one final downtown Reno run, which you can read about here.

We wound up leaving just shy of noon.  The plan was to head back into Elko, use my daily free play ($25) and some left over food coupons.  It took about four hours of driving before arriving in Elko.  There was a hint of storms in the air though: 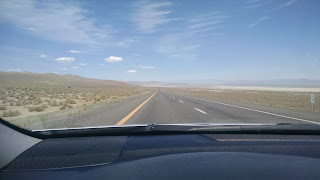 After eating at the Red Lion cafe (which had slow service both times we ate there) we gambled a bit.  I wound up having a killer bonus round of over $100 on 38 cents.  It was on the free play too!  Maybe there was hope for me yet for getting in the black on this trip: 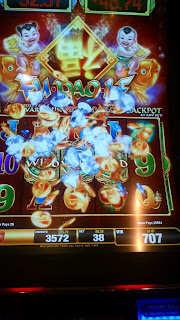 We wound up huddling for a bit and talking about what we wanted to do.  I was tired from driving and with the storm looming, we opted to use another one of our coupons and spend the night in Elko.  Not a bad deal for $50 for a Friday night.

We wound up gambling quite a bit more throughout the night and my mother in law hit a $350 jackpot on a Buffalo and Thunder game.  I had good luck for the most part too and had a nice run at the Gold Country Casino across the street: 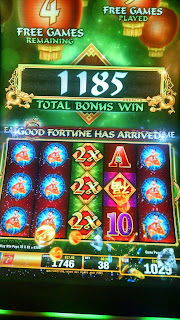 Day 7 definitely brought about the end of our trip.  All it was, was a 3.25 hour drive the rest of the way home.  I did manage to get in a decent run in the morning in Elko, which you can see here.  I wound up playing my daily $25 in free play, but this time it didn't really yield anything.  Wanting to cut my losses short, I quit gambling in Elko and we were out the door by 11am.

The trip to Wendover was pretty uneventful.  It was also a ghost town there.  They were running any promotions whatsoever.

We did have some comps due to us, which we used for the Saturday morning breakfast buffet.  At this point I was pretty "full" of buffets and I knew I'd have to pay for this gluttony sooner or later.  I did eat pretty well though.

Gambling at Montego Bay was hit and miss.  I wasn't winning anything terribly big in Wendover, but at least I wasn't completely throwing my money away.

I was half expecting us to eat and play for no more than an hour but we didn't take off until after 4pm, which meant that we didn't get home until late.

When I got home, I was thoroughly exhausted.  I had been on the go and driving and staying up fairly late (at least for me) most every night.

Overall it was a good trip, but I think I got a lot more ideas of things I'd like to do next time I go.  I'd definitely like to rent a cottage or even stay at one of the casinos along Lake Tahoe for a few days.  I was just itching to go running around Lake Tahoe.  I also discovered a marathon in October, which looks like it will have a stunning yet difficult course.

I also felt my curiosity tickled by some of the smaller towns we drove by.  While Winnemucca appears to be a tiny map dot of a town, I suspect there could be some interesting adventures just waiting around the corner there.

There was also substantially more I'd love to see in the Reno area, so I suspect I'll be back.

On the downside, with eating until I was virtually going to explode at nearly every meal, I did add to my waistline.  I wound up gaining at least 5 pounds.  So I have some work to do in order to get rid of that.  Usually these quick weight gains are short lived -- at least in my experience.

Gambling-wise this trip was largely a bust.  Granted we were in Nevada for 7 days so after that much time you are bound to take a beating unless you win something big.  Unfortunately I got a few nice wins but nothing that was going to make my wallet explode.  Thank goodness I still came home with enough money for another trip though.  If I hadn't gambled at the Reno Peppermill, I would've done alright as they were the ones that took most of my money.