The next day was another day at sea.  The previous night we had left Rosyth and headed south along the western coast of England towards Dover, our original port.

Having partied the night before I slept in way late but still managed to wake up early enough to catch the morning buffet (of course).

It was a partly cloudy day out and there wasn't much on the agenda until in the evening.  I wound up getting a few pictures of the blue sea and some of the oil platforms in the North Sea: 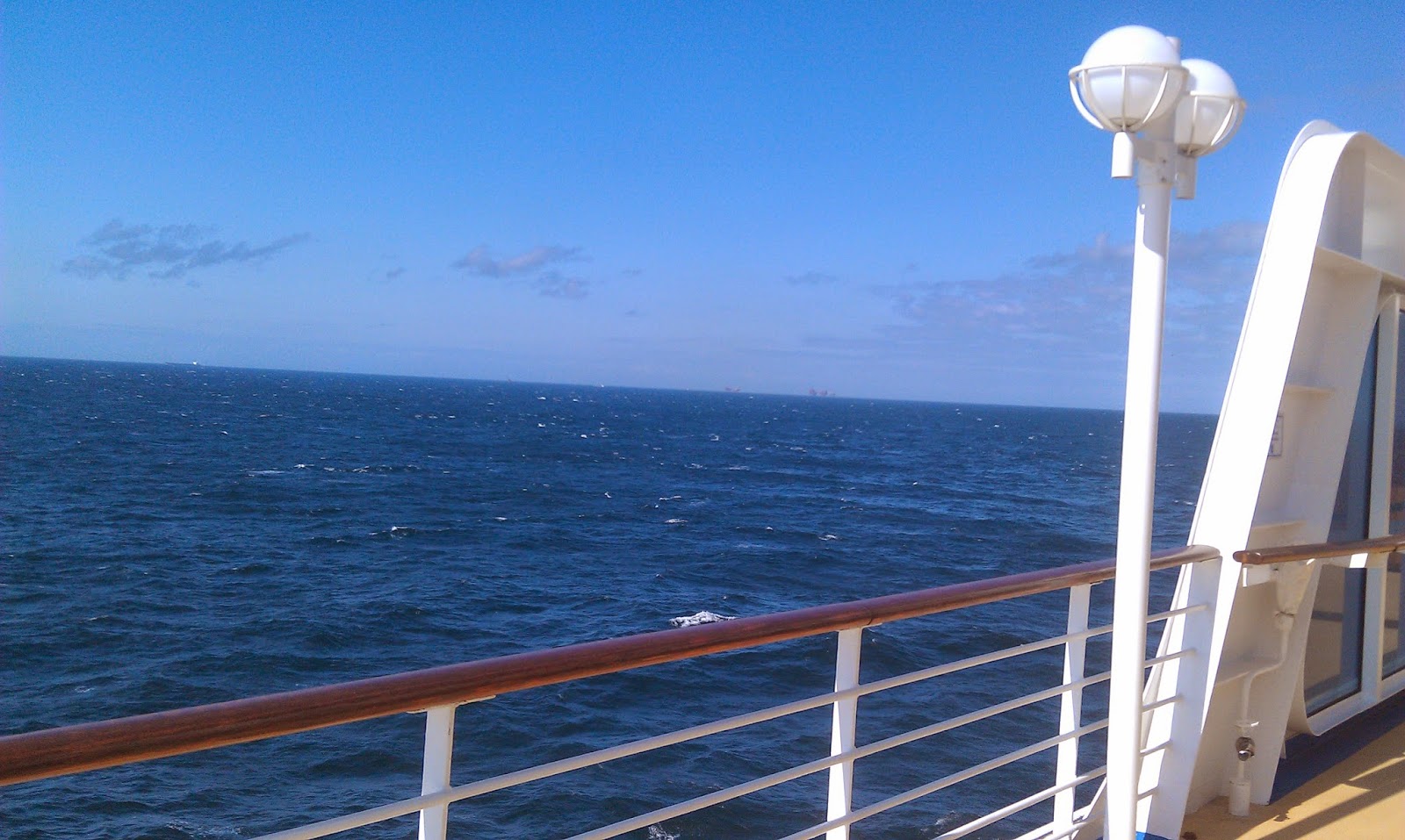 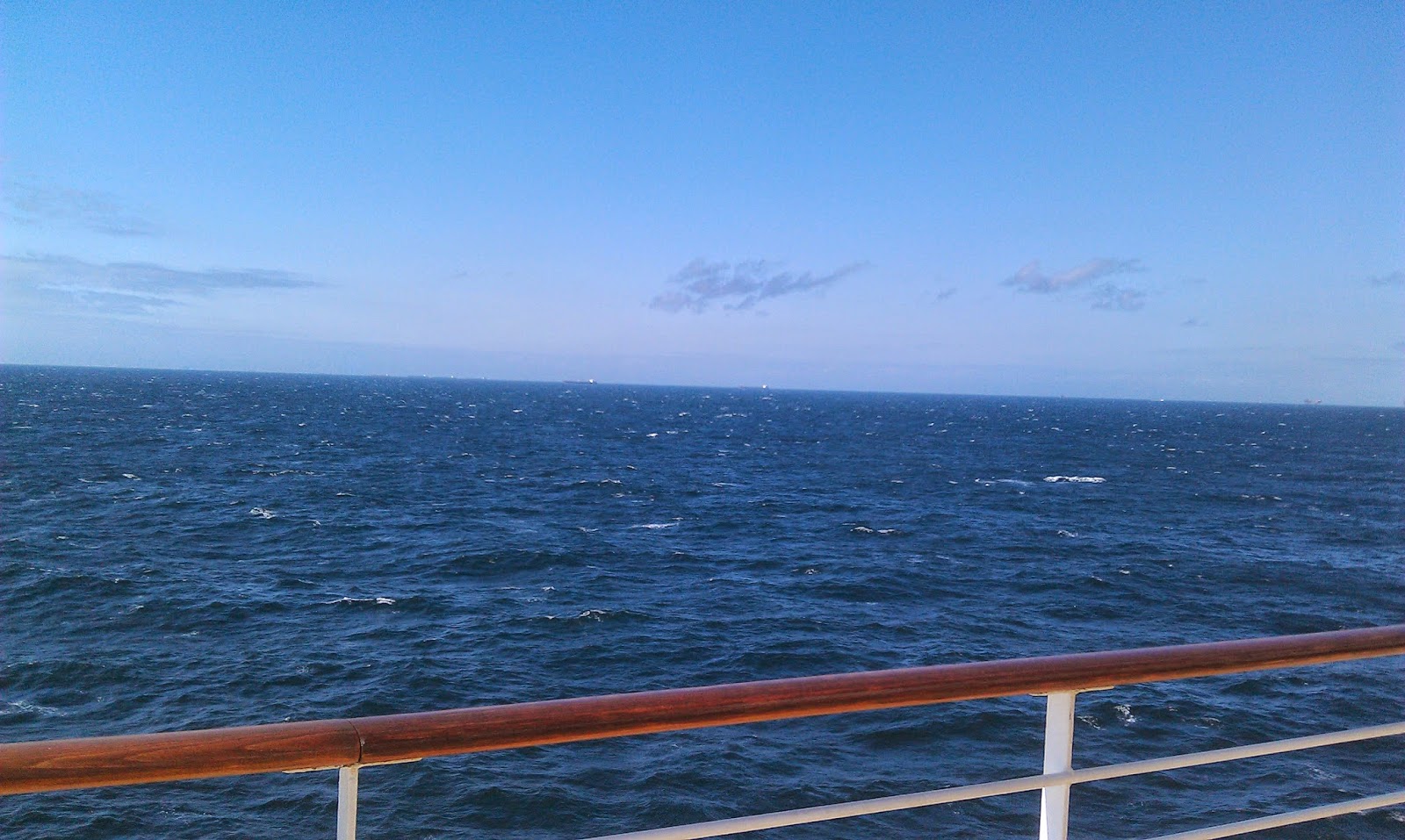 I wound up hitting the casino with Shari for a bit.  I reluctantly put in $20 into a machine.  I did get some play out of it, but no profit.  Shari tried a machine and put in $10 with about the same result.  They make it *too* easy to gamble there.  When you put in your room key, you can literally charge your gambling to your room. Shari tried that out and room charged $10.  This type of gambling would make for some very serious problems if I could do this in Wendover or Las Vegas (good thing that isn't possible).

I wound up hitting the pool deck and worked on my tan and did Sudoku puzzles.  I also hit the lunch buffet and pigged out some more.

Late in the afternoon they had a piano show dedicated to the music of Cole Porter  The music was pre-recorded but the dancing and singing certainly wasn't.  They kept to the American Standards and this was one of my more favorite shows as I knew 90% of the songs

After that show, I jumped into an encore performance of the magician who had performed earlier in the week.  I felt sort of bad as the show had only a small amount of people and he was looking for volunteers as many of acts involved "reading of minds"

I wound up getting picked and was on stage.  I should've left the camera with Shari who probably could've gotten a picture or two, but I didn't.  Basically I was told to write my best friend's name down on a slip of paper, spell it in my mind and he would guess my friend's name.  Sure enough he did.  I don't know how he did it, but I suspect he had help when I wrote down my friend's name.  He also guessed a girl's 4 digits of her phone number when she write it down on a piece of paper as well.  Either way it was quite exhilarating to be on stage, even though it was a small crowd.

Being that this was the last night of the cruise, this was our last night to hang with our dinner waiters as well as enjoy the dinner offerings.  It was really sad parting ways with the group as they seemed like chums and friends rather than employees.  They were wonderful in every regard.

They also served baked Alaska for dessert and made a big production out of it.  Knowing I have a prodigious appetite the guys got me a double helping.  Sadly, I ate it all.  Sigh.


We headed up to the lounge to see if anything was going on, but sadly the place was a ghost town.  We parted ways with the bartender who had kept us well hydrated.  On the way back to the room I snapped this photo of the pool area. 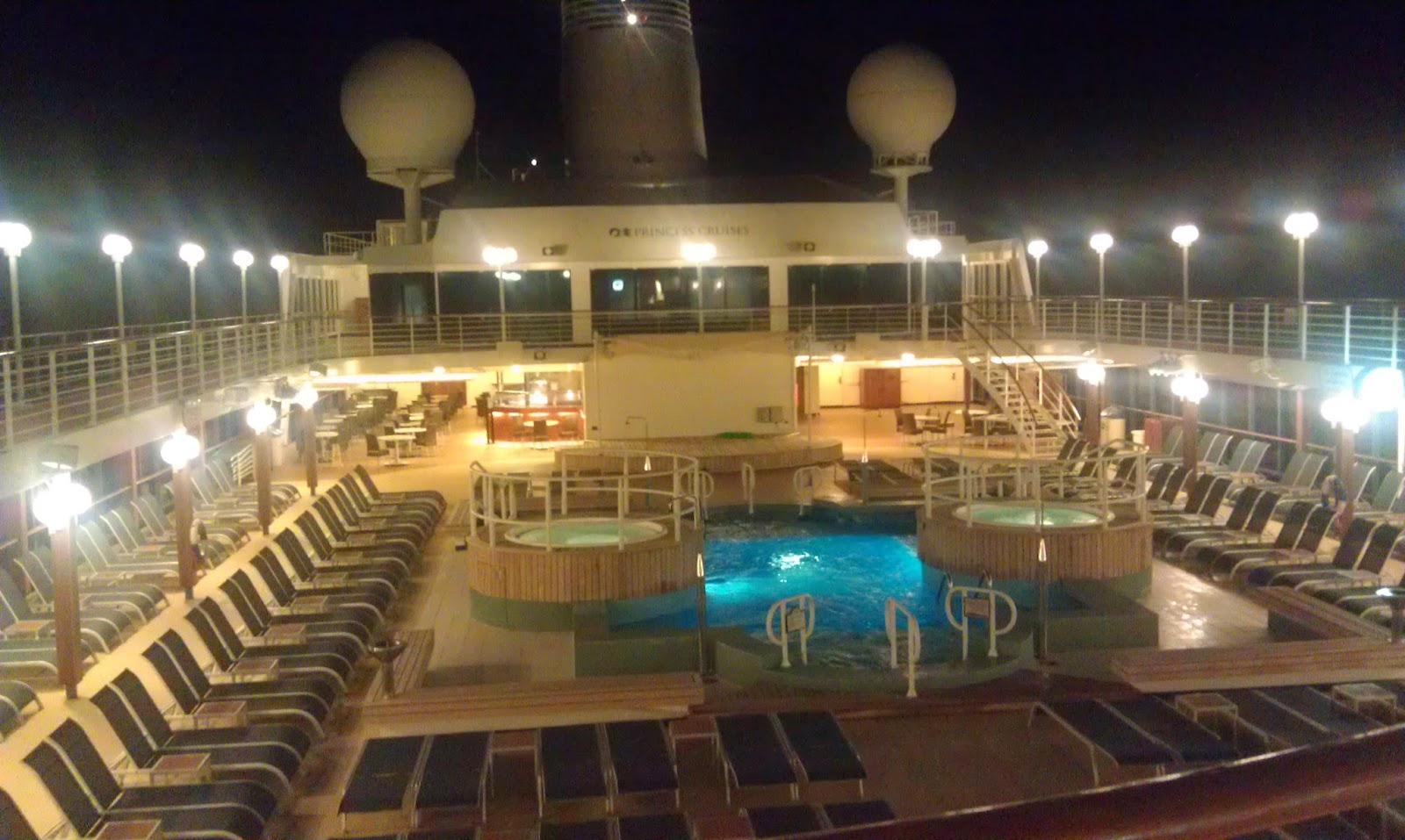 We packed our stuff as we had to be up early the next morning.  We had to be off the ship by 8AM and we had a very long day ahead of us as we returned back to the United States.