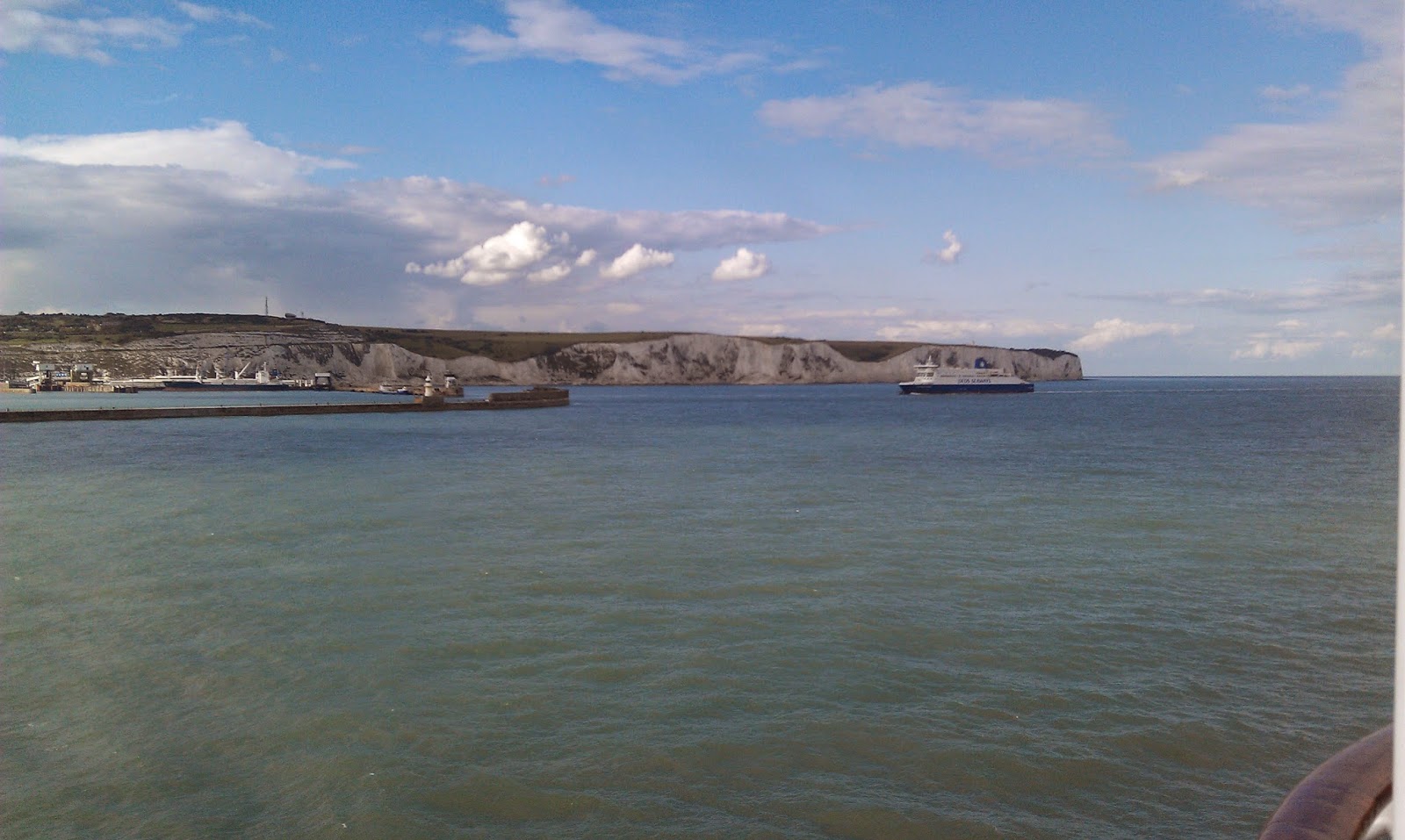 The following posts will all be about my experiences on the Princess Cruise's British Isle.  We have had this planned for the better part of a year and we took off last week on a flight from Salt Lake City to London / Hearthrow in England.

We had the following places on our itinerary:  Jersey Island, Wales, Dublin and Edinburgh.  The cruise was about 8 days long plus two days of travel.   This was my first cruise and my first time exploring England and Ireland.

There are no running stories here or race recaps (other than witnessing a corporate 5K in Jersey) but I'll be posting lots of pictures and writing about my travels (now that I am home).

We took off from Salt Lake City airport on August 18th at about 1pm.  Our flight was about 20 minutes delayed, but it really wasn't a big deal.  We had a 3 hour layover in Dallas / Fort Worth so being delayed wasn't a big deal.  The slightly less than 2 hour flight to DFW went without a hitch and we wound up enjoying a meal at Bennigans.

I've never been to Texas before, believe it or not.  While I can't qualify that going to DFW was a tour of Texas, but if the saying "Everything is bigger in Texas" than DFW stands to the rule.  This place was absolutely HUGE.  From the towering escalators to vaulted ceilings, this place was a castle . It was easy to navigate though and jumping from terminal to terminal wasn't an issue.

It was nice to breath low altitude air again.  I could really tell a difference.


After killing time in DFW, we boarded an international flight to Heathrow.  This flight was 9 hours long and I was NOT looking forward to it.  I don't do well in the cramped seats.  I was hoping I'd be able to sleep on the flight, but I've never had much luck in doing so.  Luckily, the flight had personal movies that you could watch throughout the flight.  I opted for American Beauty (for about the 10th time) and Deliverance (I've seen bits and pieces of it, but never the whole thing).

I managed a few hours of fitful sleep and before I knew it we landed in Heathrow in the morning.  Going through customs was fairly easy despite a lengthy and maze-like walk to get there.  Finding the shuttle to the Princess cruise line was also a snap, although we had to wait about an hour before we finally hit the road.  I was in decent shape for having not much sleep but I felt extremely jet lagged and woozy.

The first frustration I had when we landed was that my phone was NOT working.  I thought I had gotten international working beforehand, but anytime we were on land the phone simply would not find service.  However, we were able to send / receive messages while at sea.  Go figure.  However, I truly MISSED my phone.  Not having the ability to Google or check Wikipedia made me anxious...  Try it sometime, you'll probably find you are just as addicted to your smart phone as I am.

Also we had a brief scare.  After arrival we went down to collect our luggage and it wasn't there.  I waited until the conveyor belt stopped and was panic stricken.  How the heck would they get my luggage to me if it hadn't gotten there.  A deep dread started to settle on me and there was some talk about that possibly we were supposed to get our luggage in DFW and have it rechecked before going to international (no one told us we had to and it didn't make sense that we would have to).

Either way, after waiting in line for bag service I decided to make one more pass through the area and sure enough there was our two bags sitting in the middle of the concourse.  WTF... we had no idea who put them there but there they were.  All I can say is that once I had those, my blood pressure dropped about 10 points back to normal...

The port of origin on our trip was in Dover.  This meant according to Princess about a 2 to 2.5 hour drive from Heathrow (in the middle of the country) to the eastern coast.  According to Google it would take about 90 minutes.  I want to say that including circling around Heathrow looking for more passengers that it was closer to 2 hours.

The bus ride there was actually fairly scenic and I studied the passing scenery on the way there.  I snapped a few pictures of the rolling hillsides along the freeway but they aren't terribly good pictures. 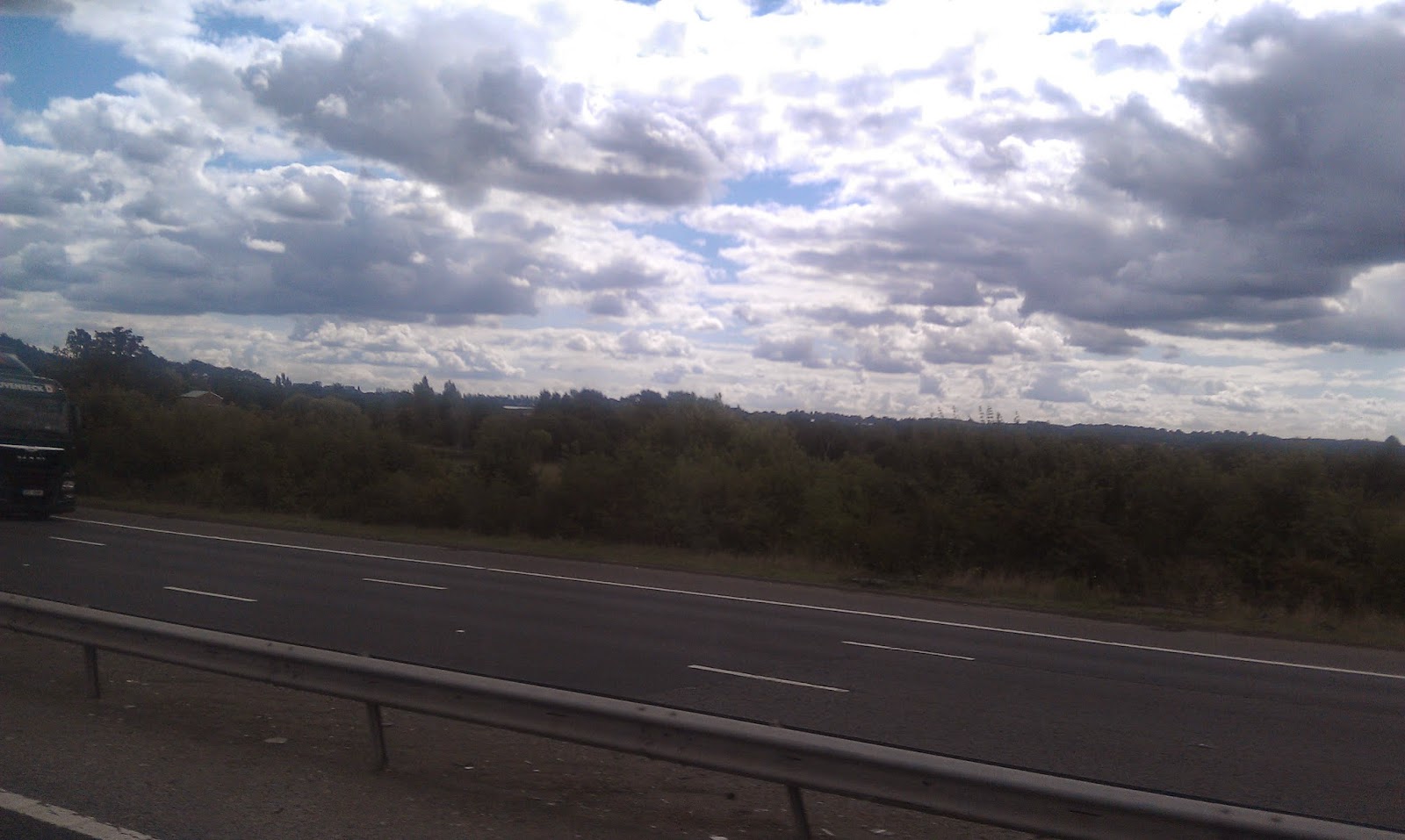 The Ocean Princess isn't one of the hugest ships but it was pretty well filled.  There was a bit of a process getting on board, but it wasn't too terribly difficult.  The ship could hold over 600 passengers and from what I could tell most of the rooms were filled.  It was pretty easy to make friends with people as well, as you would run into them on various parts of the ship or on the cruise.  Most of the passengers were American or spoke English, so there was rarely a language barrier.  Also, all the prices on the ship were in US Dollars. 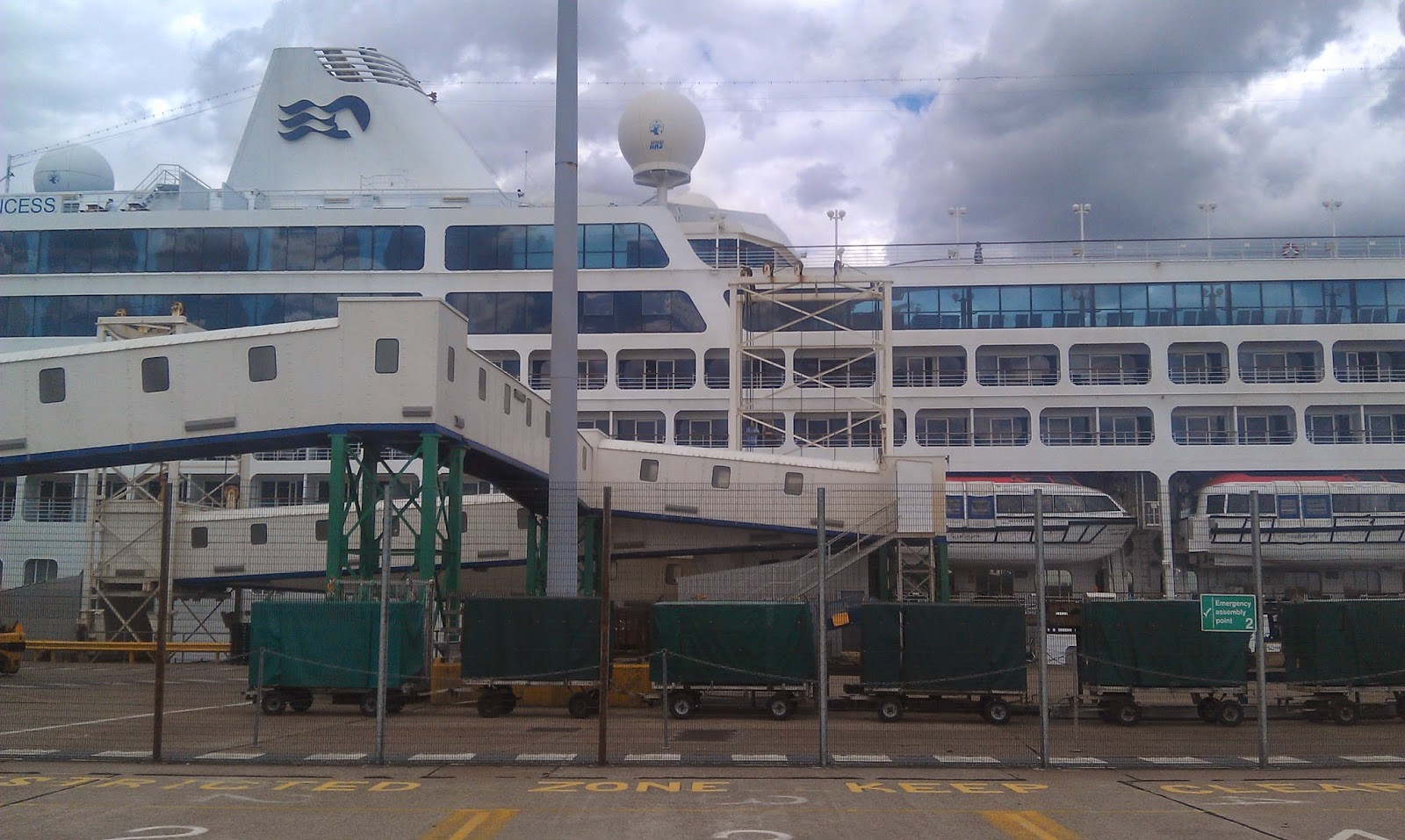 Besides being one of the biggest ports in all of England, Dover is known for its white cliffs (or at least as how the song goes).  While I didn't get a chance to get up close and personal with the cliffs, I did manage to snap a few pictures. 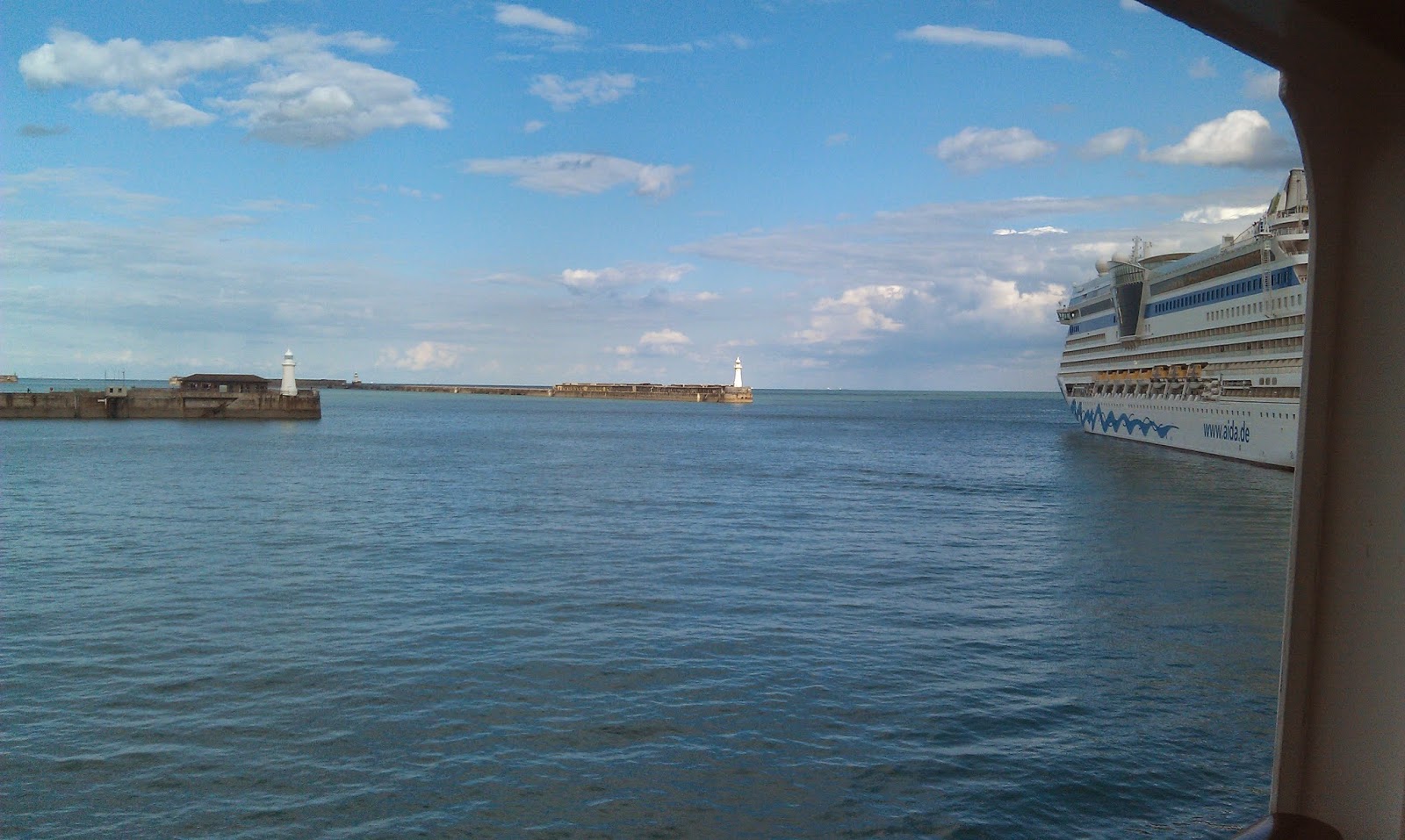 We checked into our room, which was more spacious than I thought it would be.  While there wasn't a huge amount of room to lay about, we had all the comforts that we required. Sorry for the messed up bed pictures, I took these as we were leaving. 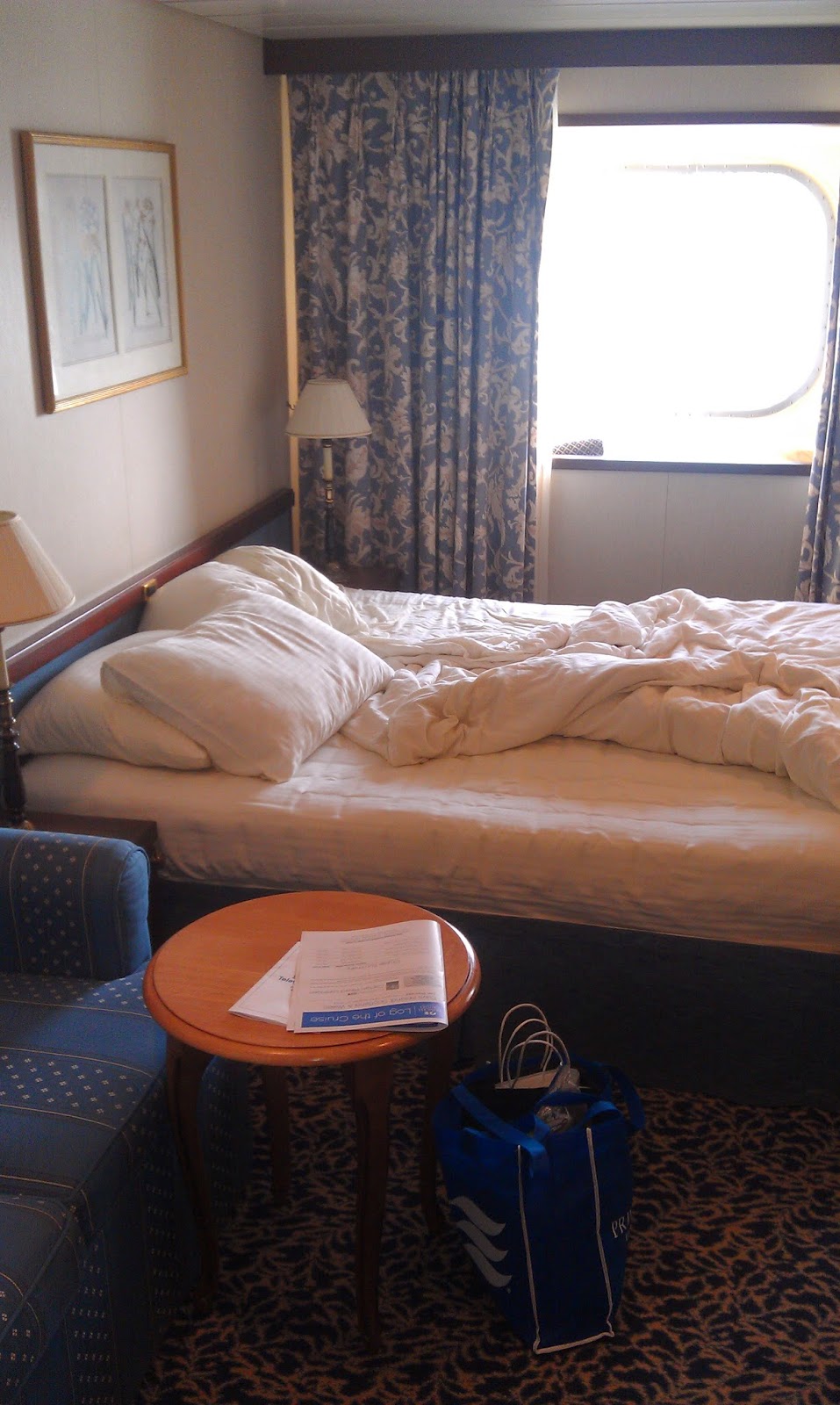 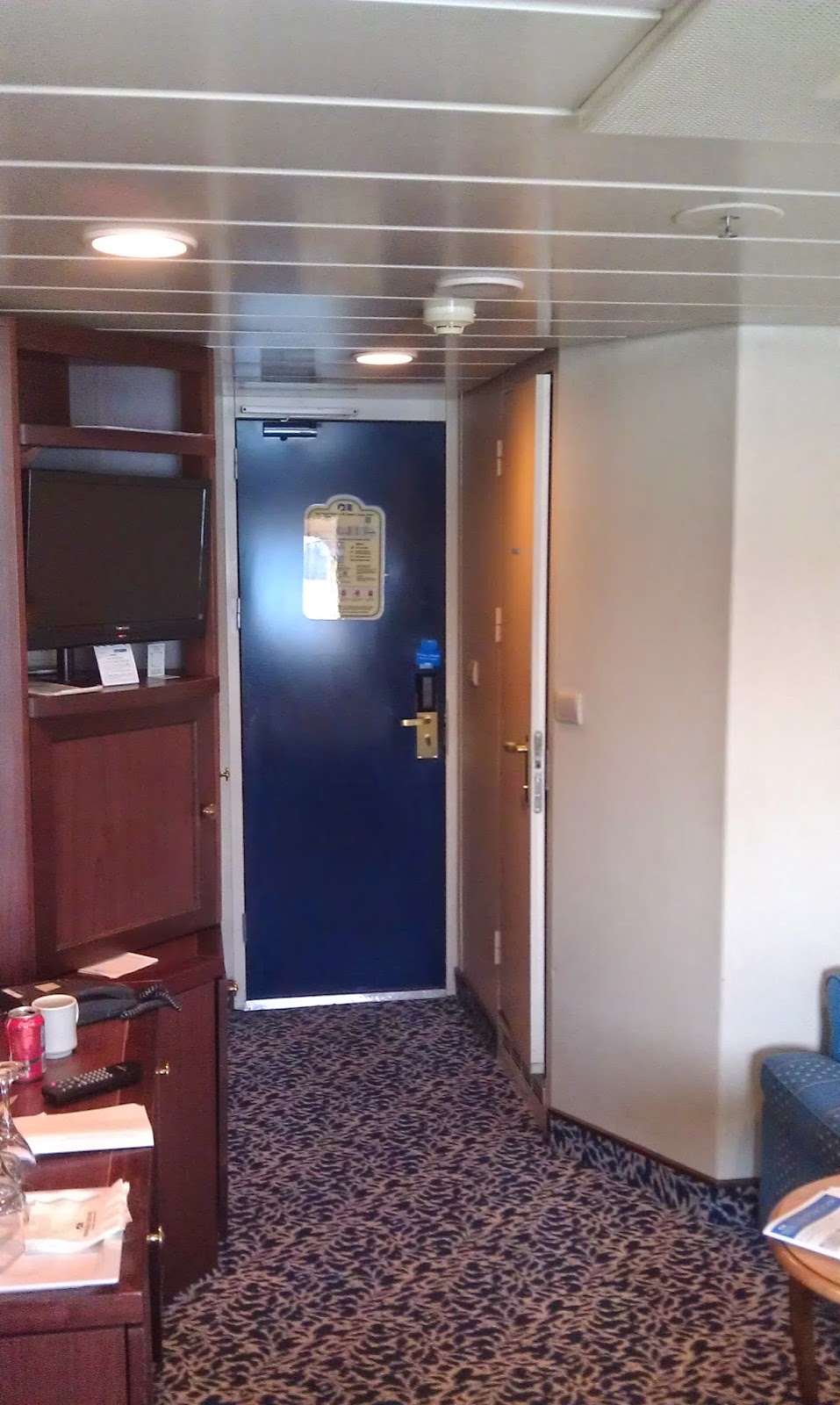 After we settled in, we ran up to the buffet.  I had been told a lot of stories about cruise ships buffets and I pictured something that would rival that of the best in Las Vegas.  This buffet was good -- certainly better than your Golden Corral, but I kept saying I'd rather have a Wendover buffet.  There was plenty to eat though and I certainly had my way with the food selection.  I just can't help but say I was a little underwhelmed.  I was hoping for a shrimp parade or even some nice fish, but most of it was your typical cheap fare.
I had expected to be a denizen of the buffet room 24-7 but my usual feeding routine was eat a large breakfast, have a small mid afternoon lunch and then eat in the dining room in the evening.  I wasn't running at all in this trip, but my appetite was still pretty fierce.  I was worried about putting on a lot of weight, so while I ate well (you can't avoid eating well on a cruise) I didn't leave waddling out.

One thing to note about the buffet: they also had the HUGEST plates.  I could really load up.  In the morning I'd usually have fruits, waffles, eggs, smoked fish, yogurt and of course some pastries.  For lunch I'd have pizza, fish, vegetables and then of course more desserts.  Again, the food was good, but not out of this world good.

We were in the late seating for dinner and I was super impressed with the attention and food we received.  We had the same hosts throughout the trip who were extremely gracious and accommodating.  They knew I was a big eater and they wound up indulging me at every opportunity.  They were super cool and I really looked forward to seeing Joran (from Hungary) and Larry from the Philippines. 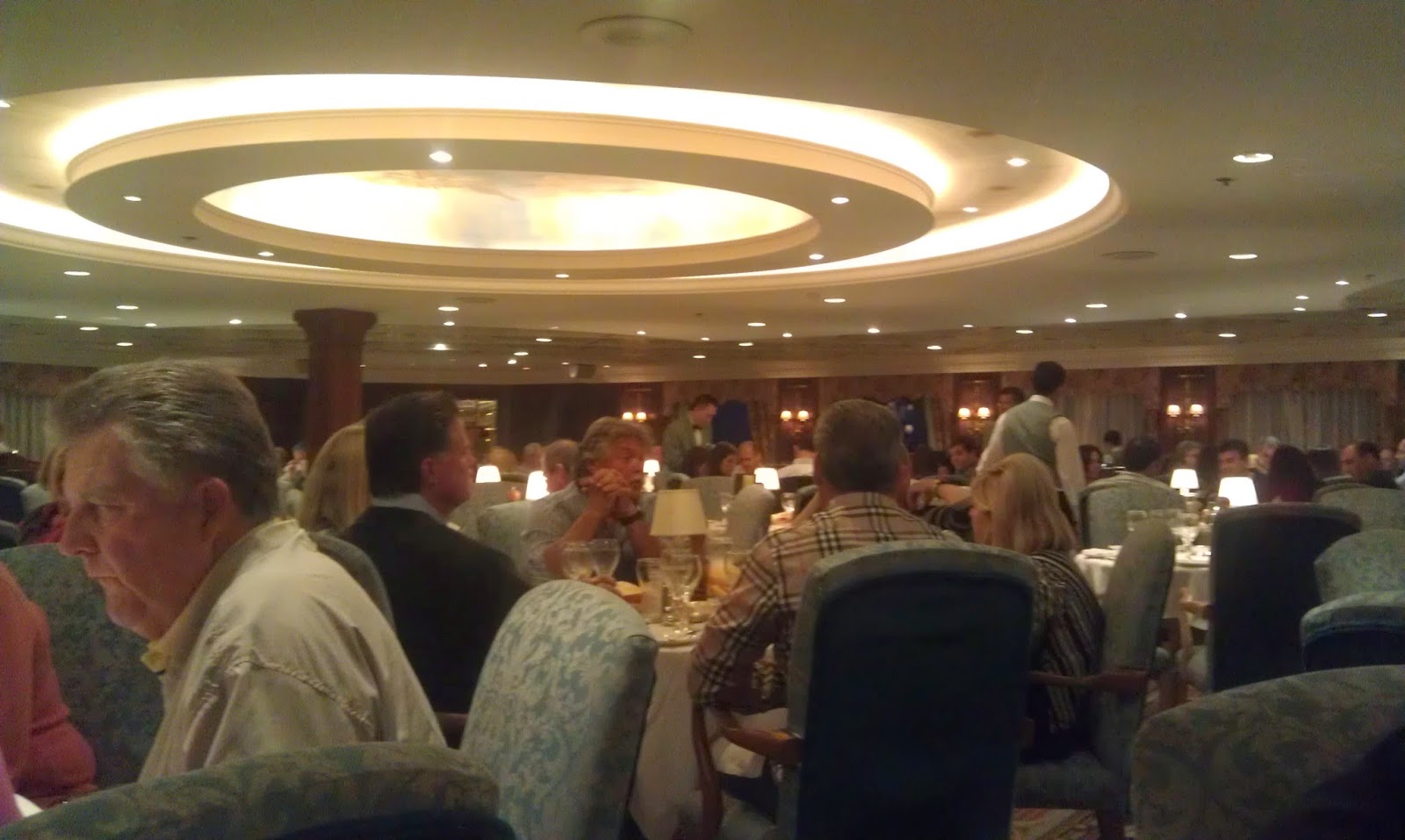 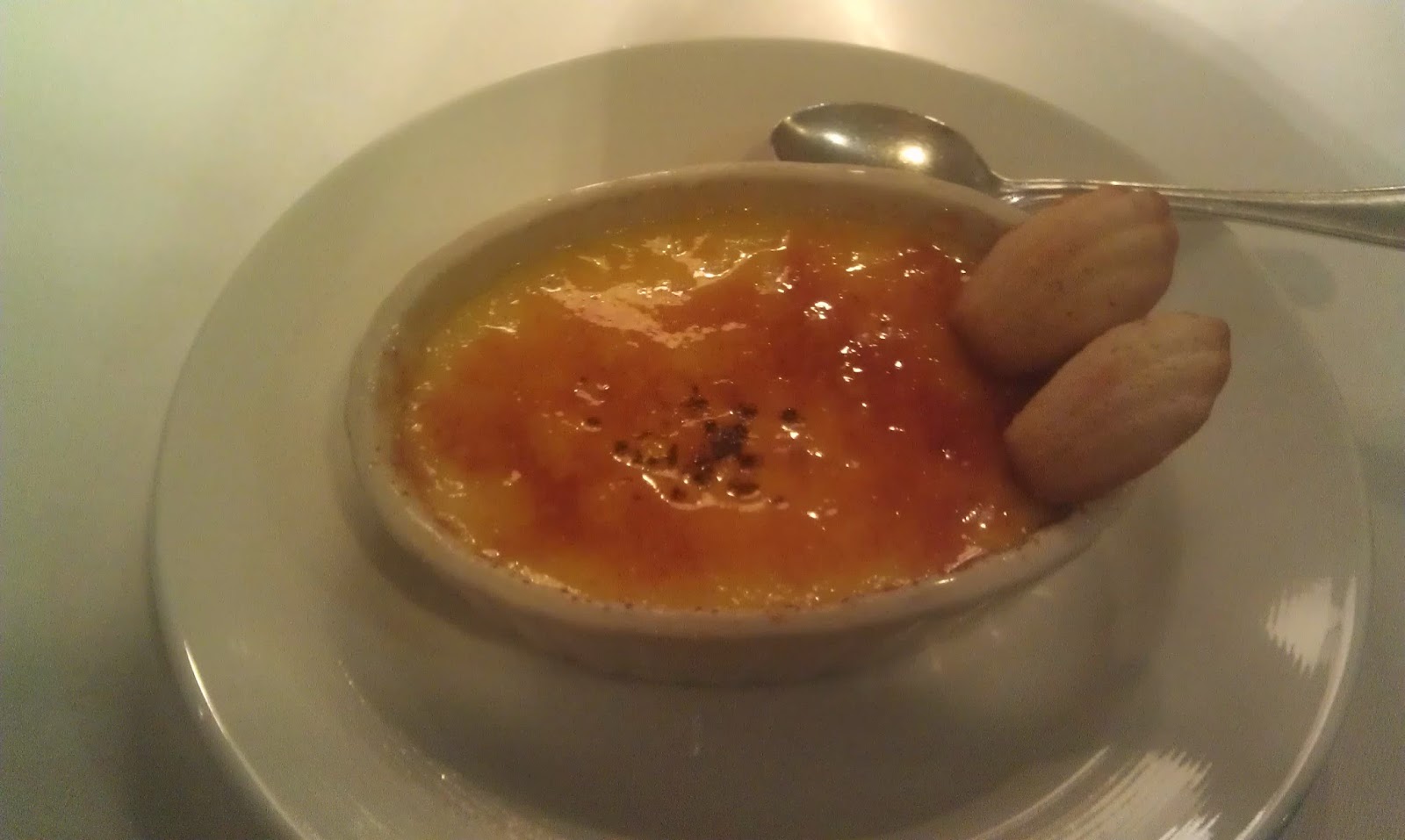 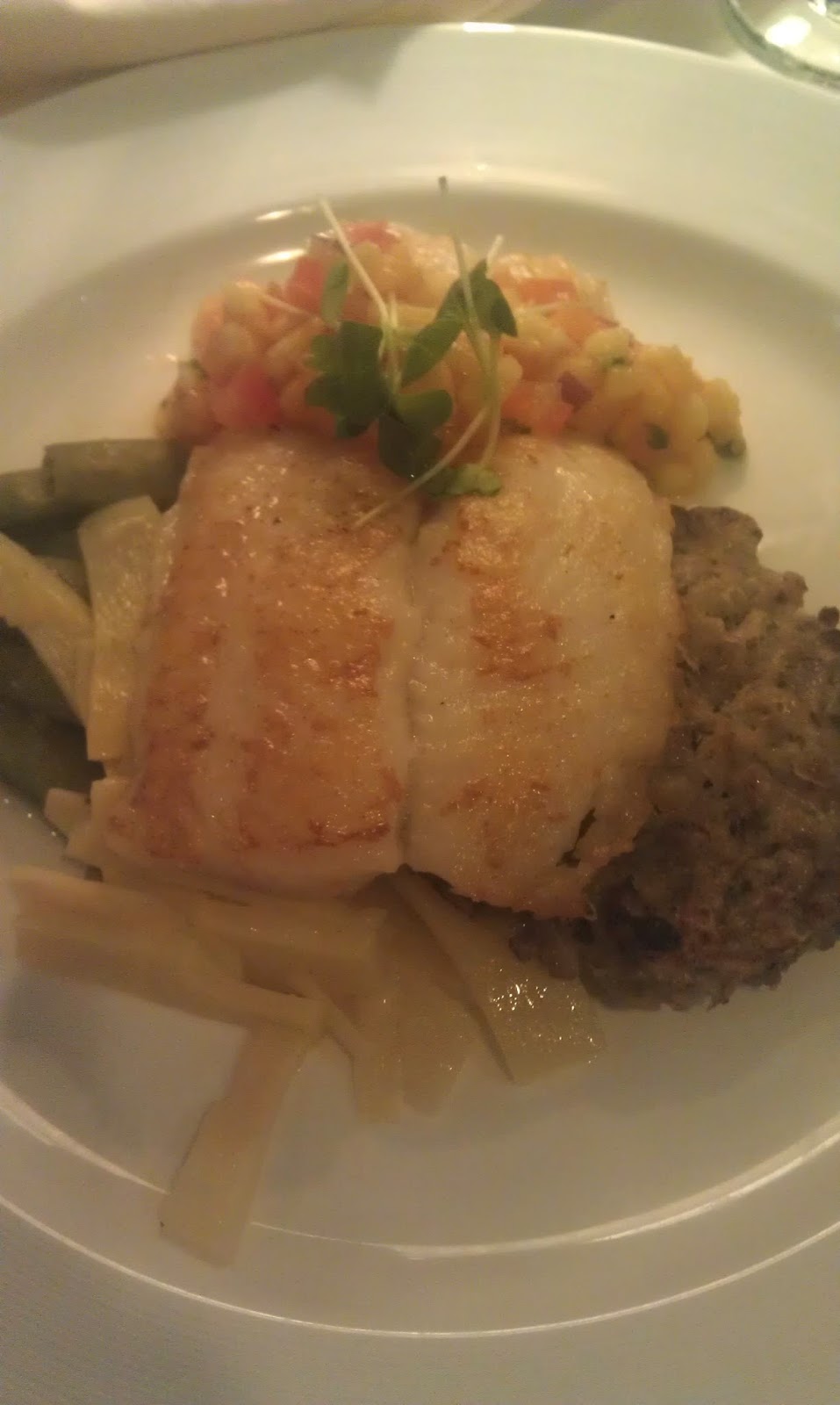 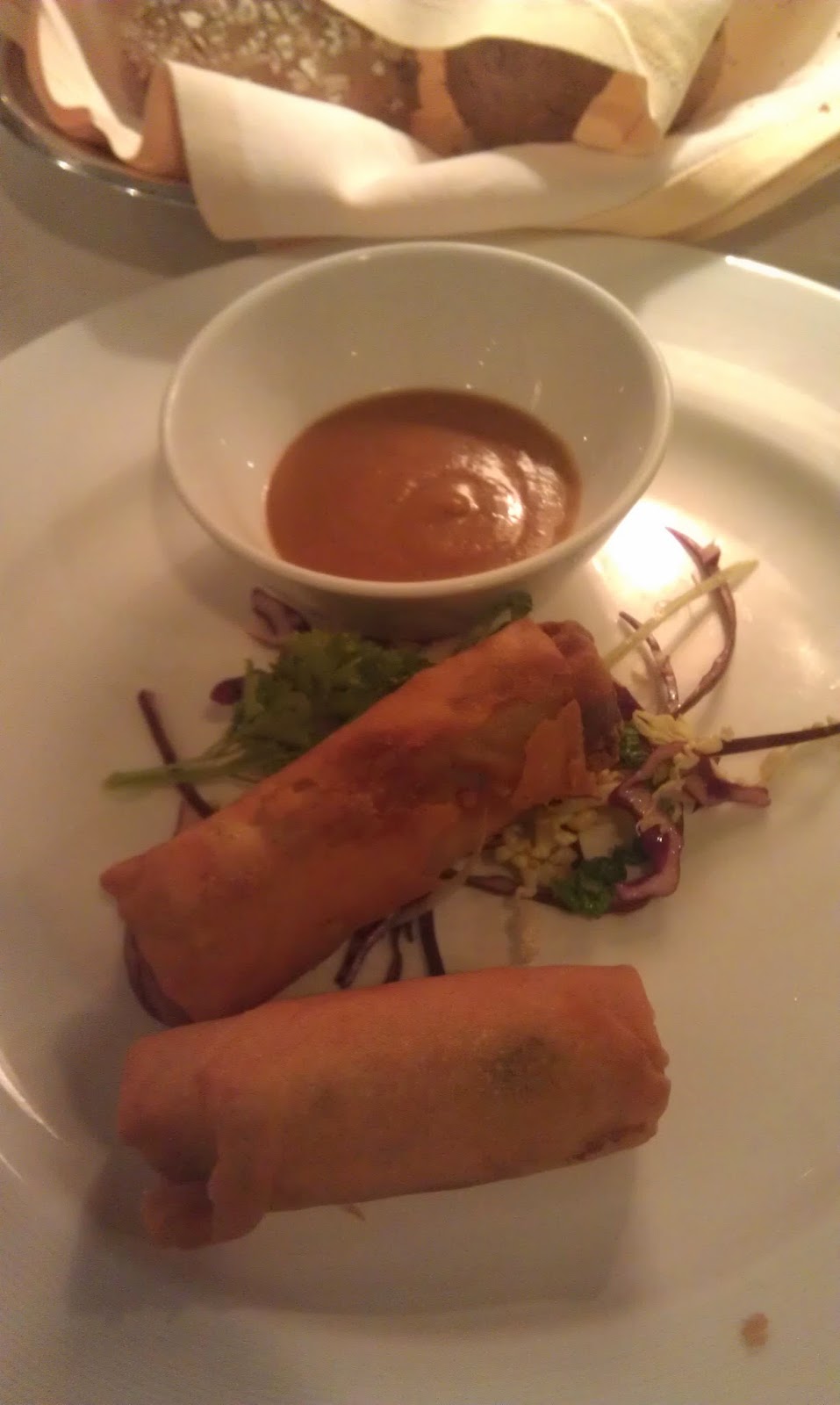 While eating we took off from Dover and set sail across the channel to the island of Jersey.  The gentle lolling of the ship put me to sleep and I wound up sleeping fantastically.