Those that know me, know that I love all things Nevada and that includes Las Vegas.  Being a runner, that means I jump at the chance to do any major race that comes to the state (and some of the smaller ones).


Naturally, I am all in for the Las Vegas marathon. And I've run the race every year since 2009 when the Competitor Group took it over.  This year, I felt really confident, going in with a solid base of training.  I felt good with no major injuries that I am nursing and I knew the course.

This time I also had a friend to share the experience with.  My friend Dennis, who I often saw at a variety of races in Illinois is now a resident of Las Vegas.  He threw together some training and decided to run it.  While he started in a different corral, we had the opportunity to ride over on the courtesy bus from the Mirage and hang out prior to the race, which made the 90 minute wait until the race start much more tolerable. 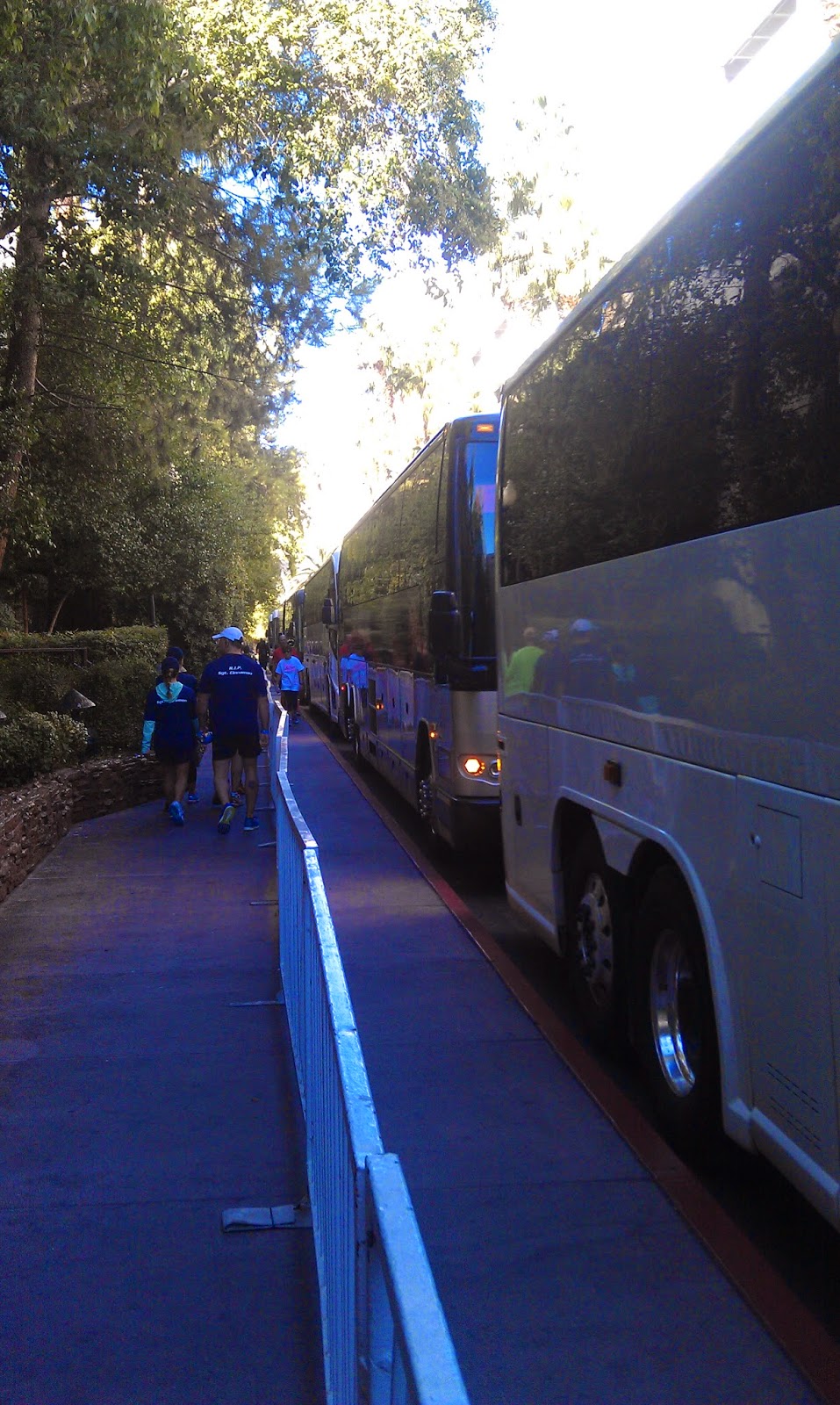 I woke up in the morning feeling pretty good, despite being out sort of late the previous night.  I still managed about 8 hours of sleep, which is good, since I rarely can sleep well before a morning marathon.  With a 4:30 pm race start, I knew I had to get in at least two meals, so I immediately had an iced tea, a cliff bar, and handful after handful of Wheaties (plus a few cookies as chasers).  A few hours later I waddled over to the Casino Royale Subway place and paid $9.50 for a Veggie Delite (today I paid $5.00 for the same sandwich in Salt Lake).

Dennis swung by the Mirage and at about 1;30 we headed out to the parking lot to catch the bus to the starting line.  Last year, I had to stand in a line, outside for a good 30 minutes before the buses even arrived.  This time around, I was on a bus and got to sit in comfort for a good 30 - 45 minutes before we took off to the starting line.  I'd rather be sitting than standing.

We had about 90 minutes to kill so we wound up sitting around.  The band, Macklemore and Ryan Lewis didn't do anything for me so I was just happy to people watch.  For once there were PLENTY of bathrooms.  The Competitor group really did a good job providing enough bathrooms for 35,000+ runners.  I never had to wait more than 3 minutes to use one.  They also had water, bananas and a few other snacks.  The time went by fairly quickly and before I knew it was time to jump into our respective corrals.

The weather was cool and I was very glad I went with shorts, gloves, a runner's cap and two tech shirts (one long sleeved and one short).  I was comfortable so long as I was sitting in the sun but with the breeze coming from the east, it felt chilly in the shade. 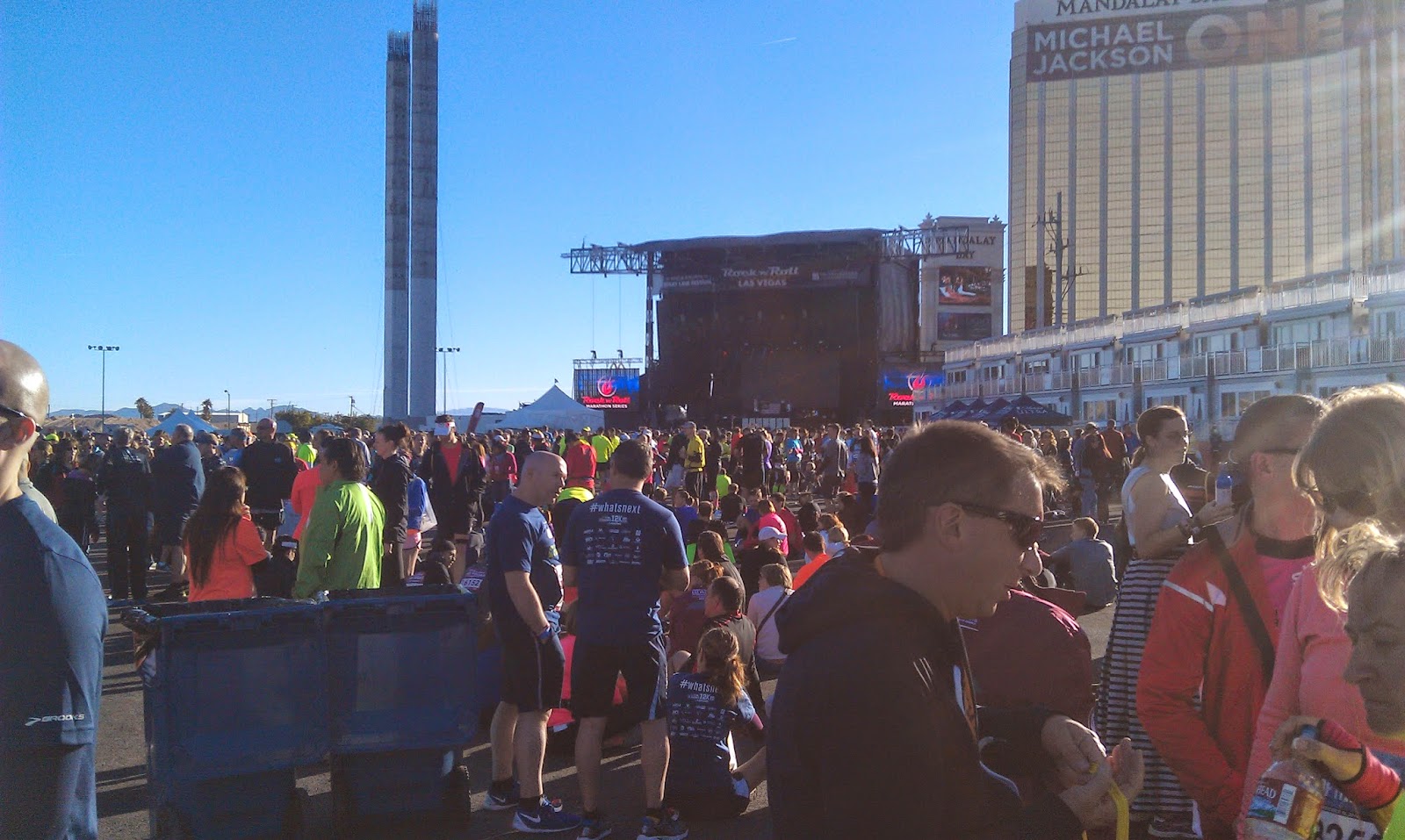 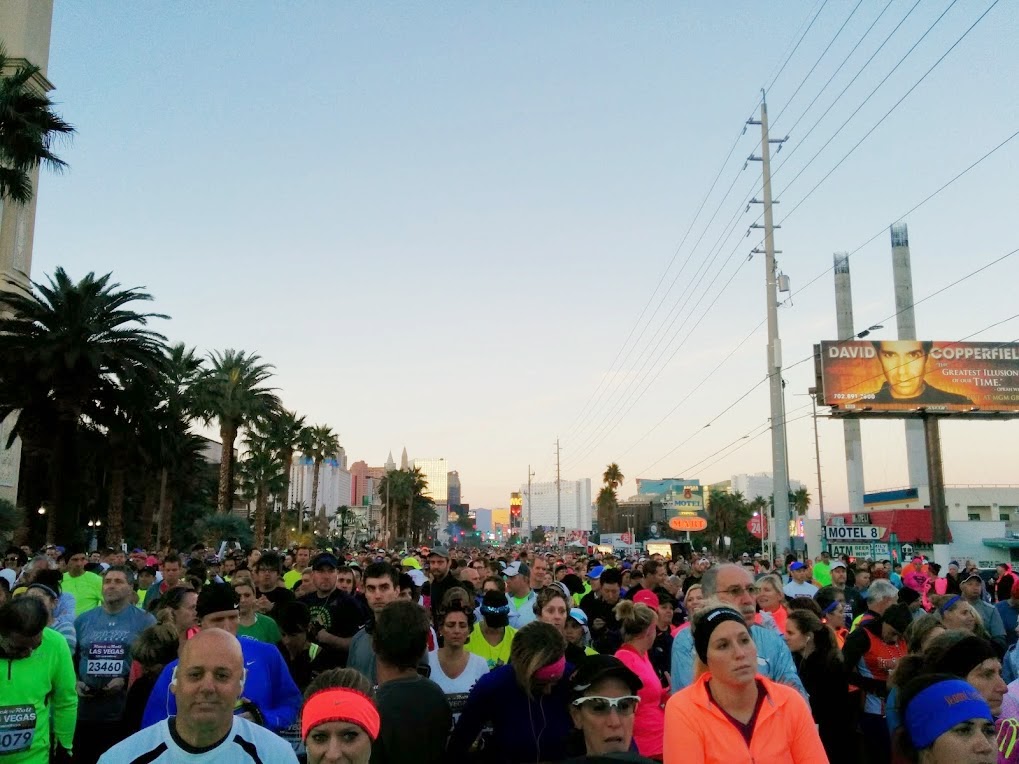 About 25 minutes before the race started, I parted ways with Dennis, who was starting about 12 corrals behind me.  I was supposed to be in corral #12 but I gave up trying to get any closer and settled on the back of #13.  The event was chip timed, so as long as I was somewhere close to where I belonged, I figured I'd be happy.

As usual, the corrals were pretty much unmanned.  I looked around saw many runners who clearly belonged further back and with bib numbers tens of thousands higher than mine.  This is par for the course but I heard of several stories of people who couldn't finish the marathon in the cut off time because walkers and slower people kept them penned in.  Always frustrating when you want to start running in the first mile or two only to have to weave around throngs of walkers who couldn't do the runners a courtesy of lining up where they were supposed to be.

I started just after 4:45 and by the time I got rolling, the first few corrals were already heading north on the opposite side of the road. 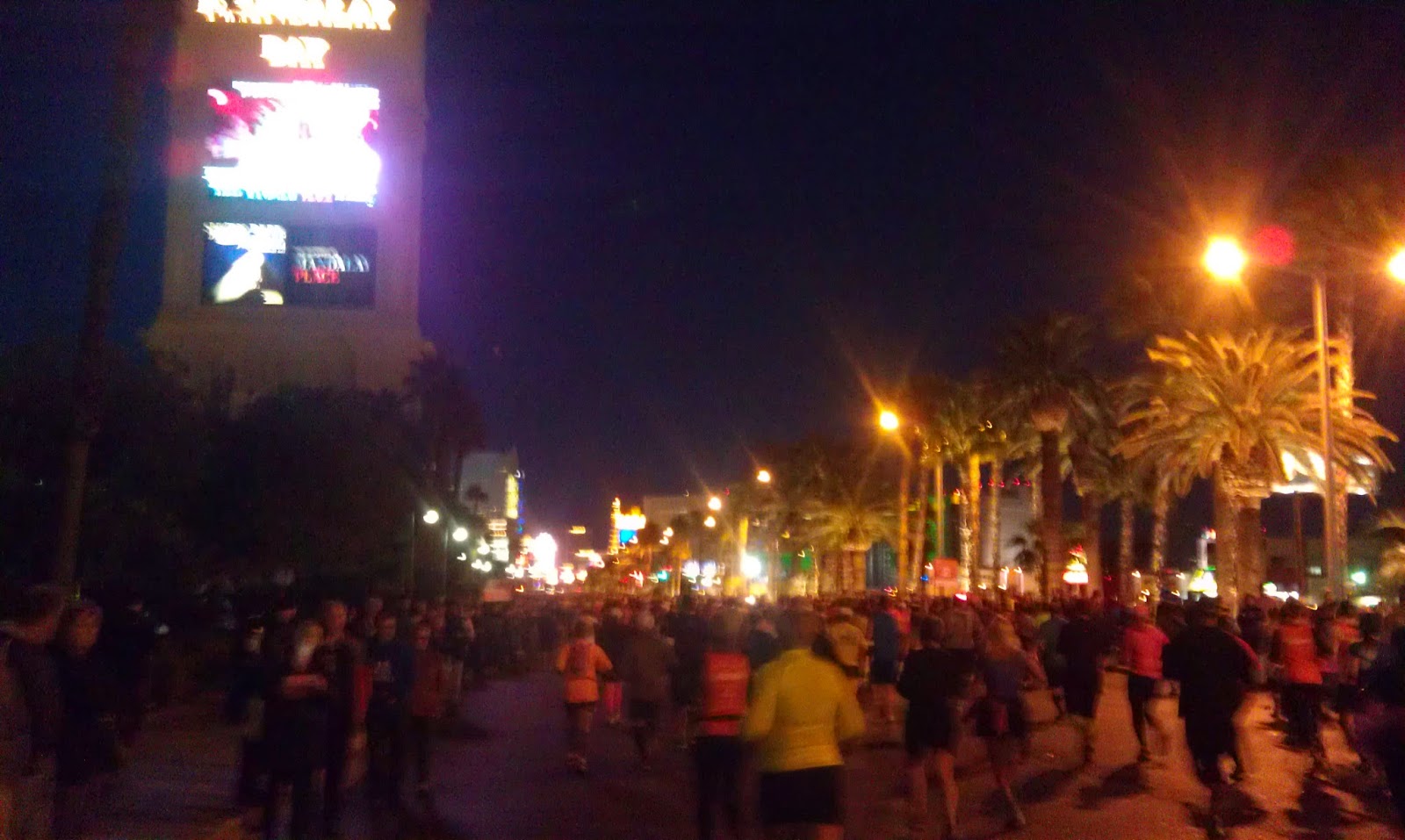 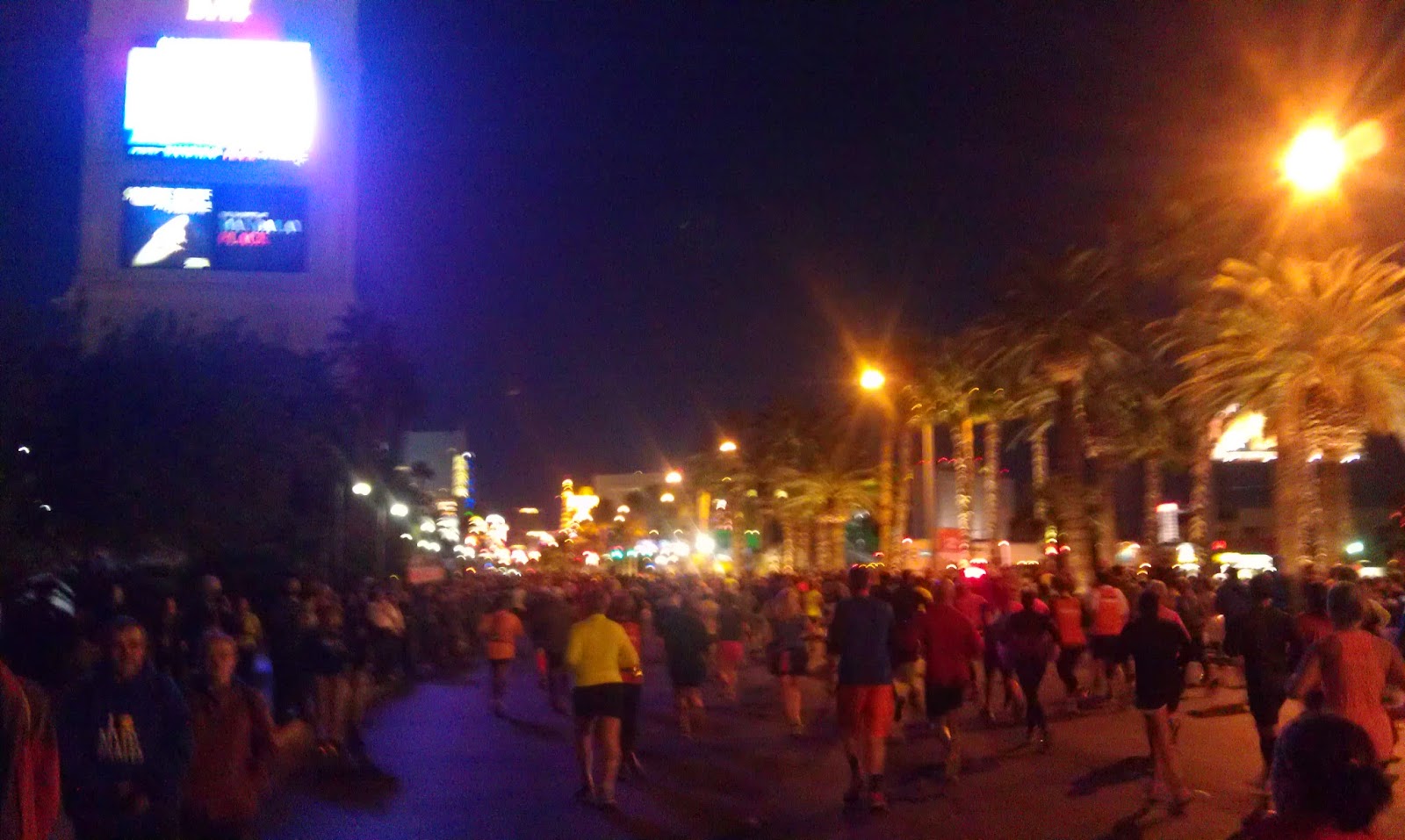 I really didn't have any hard and fast goals this race.  An "A" race for me was sub 4, a B was sub 4:15 and C was anything under 4:30.  I was looking for an even split and doing some math on my previous times indicated I should probably run the first half in about 2:07 or so.

I didn't want to waste any energy zig-zagging through the crowds and kept my passing to a minimum. The first 3 miles I kept very very conservative and just soaked up the energy of the roaring crowds and other runners.

Unfortunately, I also had the massive urge to use the bathroom (#1).  I didn't spot an open bathroom until about mile 5.  I lost about 90 seconds waiting for someone to finish ahead of me and conclude my business, but I am glad to report I felt significantly better.

Of course, the first 7 miles are so are absolutely electrifying.  Having the energy of the crowds and seeing the lights around you makes this a great course.  Things got a little ho-hum as we ran along the east side of the downtown area.

However, once we split off from the half marathoners, you get the treat of running down Fremont Street.  This was just awesome in the fact that the crowds can get up and personal with you.  I must've slapped / high-fived dozens of hands from people of all ages.  I felt like a rock star as I cruised under the electric canopy as everyone cheered me on and music blared from the overhead speakers.

Upon leaving Fremont Street though, things once again dreary.  The crowds are pretty much gone and now you are running through North Las Vegas, which is probably one place you wouldn't want to hang out after dark by yourself (or even with friends) . This section also starts with two lengthy hills and out and back sections.  Visually there isn't much to look at either - just fast food joints, some walled off neighborhoods, a corporate center and the North Las Vegas airport landing field.

I kept myself motivated and I crossed the half way point at about 2:08.  Given that I had stopped and taken a few pictures and used the bathroom, I crossed exactly at the time I wanted to.  I still felt good and best of all I was slowly picking off people.  I was doing a LOT more passing than getting passed!

This didn't let up and this is exactly the type of experience I had last year... where I just didn't get tired.  I didn't deviate much from my 9:30 (or so pace) and at miles 5, 10, 15 and 20 I sucked down a non-caffeinated Strawberry Banana Gu.  Also major props to the Competitor Group; there was a water / Gatorade stop at every 1.5 miles (or less it seemed).  While I did carry my fuel belt, this was the first race where I came back to the hotel with a flask or two completely untouched.

The race has also thrown in a few extras that I didn't remember from last year, The underpass beneath the freeway was lit with colored lights and there were a few lighted trestles and arches just to break up the monotony.

Also at the race's highest point (near the Fiesta Rancho Casino) I was treated to a wonderful view of the strip, some 8 or so miles in the distance.  It was nice to know that I was now in the home stretch.

Now that I had the uphill done, I picked up my pace and again found myself picking off people left and right as I made my way back to Fremont Street.

Normally, in a marathon, I crash and burn in the last 6 miles.  Often times, I run each of the first 10Ks in like 50 - 55 minutes and the last one takes nearly 90 minutes.  I am happy to report that I didn't really start feeling awful until about the last mile.  At that point, I can just suck it up and cross the finish line.  Also, the "power up" of rerunning Fremont Street on the way back was just incredible.  There were still plenty of people who treated me like a celebrity as I cruised through the street.

After leaving Fremont Street, the course pretty much goes desolate and it is hard to stay motivated. Behind the Stratosphere are some bars and rough neighborhoods.  Knowing that the strip was coming up, made me push a bit harder -- and the fact that I was still passing people.   It was at this point that I started to crash last year.  I am happy to report, that I didn't have this.  I was just rocking and rolling and feeling remarkably well.

Despite my 13 minute head start I fully expected Dennis to come up and pass me at some point in the race.  Just as I was thinking maybe I could save face, Dennis flew by me just shy of mile 26.  He looked pretty good and was still running a solid pace.  It was cool to have someone at the finish line to share the post race experience with and humbling that he beat me.  Normally the feat of finishing a marathon is sort of lonesome because the finish line is usually just a morass of people, but not this year!

Shari was on the other side of the fence and threw me some warmer clothes (my body was fine, but my hands despite my gloves were frozen).  My phone was also covered with a leaky Gu, which made everything sticky.

I grabbed a bag of pretzels, protein bars, chocolate milk, and some Gatorade before walking all the way past Caesar's Palace and to the front of Bellagio to get out of the corrals.  That is over a quarter of a mile, if not more.  Getting back to the Mirage was a headache as we had to navigate through the maze of the front of Caesar's Palace just to get back onto the sidewalk.  It easily took me 30 minutes (or more) to get back to the Mirage.

I met Shari in the casino and we all headed up to the room where I was able to take a hot shower.  My teeth were worn down by either the acidic Gatorade or grinding them so I wasn't really in the mood to eat.  Just about any long run I do these days really make it tough to eat afterwards.  I did manage to get some soft food and drink down, however.  All the food places were packed as well, so I opted just to make do with snacks and whatever I had in the room.  Dennis couldn't leave until after 11pm because the bus service was stopped and the taxi line was a mile long.

This was "my" race for the year.  And I PR'd for 2014 on it.  I've run marathons much faster (3:38 is my best) but this was a huge success.  There are some things that I think really helped me with succeeding:


Overall, I was super happy with my experience.  I was a little worried that we'd have a repeat of 2011 where the Competitor group seemed stunned with what to do with all the people (the half and the full were sold out this year).  They had more than enough water stops and the volunteers were great.  No foul tasting water or Gatorade this year either.  They could've used another Gu station, but I had brought my own.

The medal is cool and is a standard-heavy duty one.  You could practically use it as a weapon.  The shirt is a little ho-hum (I prefer different shirts for each race), but I definitely will enjoy wearing it.

I'll be detailing more of my Vegas trip in the days to come, so stay tuned.