Quite an awesome week in terms of pace and mileage.  Normally, northern Utah is in a bit of a deep freeze this time of year -- with usually a layer of snow on the ground.  We seem to be the exception to the rule in terms of cold weather.  We are unseasonably warm.  There's no snow in the valley and most of the time it is shorts + t-shirt weather when it comes to running.  Although I will admit to using my wind breaker to keep me nice and toasty.

I ran a really slow (for me) 5K on Thursday.  The Sandy 5K that I ran in 24 minutes a few weeks ago apparently wasn't a fluke and might be the new normal.  Time for me to devote a day or to speed training and eating healthy food.  It could be that I turned a corner in terms of being able to eat whatever I want and not gain weight.  I am about 10 pounds heavier than what I want to be, and 15 or so more than my optimal race weight. More on that in a subsequent post.

I think it is also that I cannot train as hard.  The altitude here really sucks the wind out of you and makes running hard that much more difficult.  It is a snowball effect: if you can't train as hard you lose fitness and that becomes your new normal.  And it keeps going until presumably at some point, I'll be a plodder.  That's not what I want.

Well, I am 45, so now I go with the 45 - 49 age division.  I haven't really paid too much attention to see if they are more competitive (or not) than the 40-44.  I guess I'll find out.  I definitely know I got my butt handed to me when I turned 40.  There were a TON of guys that were extremely competitive and it seemed like they came out of the woodwork.  I still like to compete for age group awards although lately I've been focused on doing destination races and just finishing (i.e. the marathon).  I still am trying to do the 50-states deal but I don't think it'll happen in my lifetime, but I am working on doing as many as I can.

I did sign up for the Sweetheats 5K.  I got in for $15, but the race isn't until February 8th.  I am also in for Vegas Full Marathon in November 2015.  Also we are heading to Arizona in late January (Super Bowl Weekend as a matter of face) and they have a full marathon there too (although very small).  I'll do that if the conditions are right.  Too bad I won't be there for the Phoenix or PF Chang marathon.

There are no immediate races I am planning on doing though.  I keep checking and there are a few down south but I think the local race scene is pretty much dead until next month.  I'd travel to Southern Utah for a half marathon at this point but it's got to be the right one and at the right time.

Finally, I am still looking at a destination spring marathon: Helena Montana or Fort Collins Colorado are currently the front runners.  We both want to check out Colorado as that is a potential place we may want to look at moving to (some day).  If you have any suggestions let me know.  I still flirt with going back to Illinois and knocking that state out in May as well.

No major injuries to report.  Calf twitches once in a while, but nothing serious.  Am starting to get plantar fascitiis some more.  Time to get my orthotics out again.  For the most part, though, I feel fantastic.

Picture of the Week 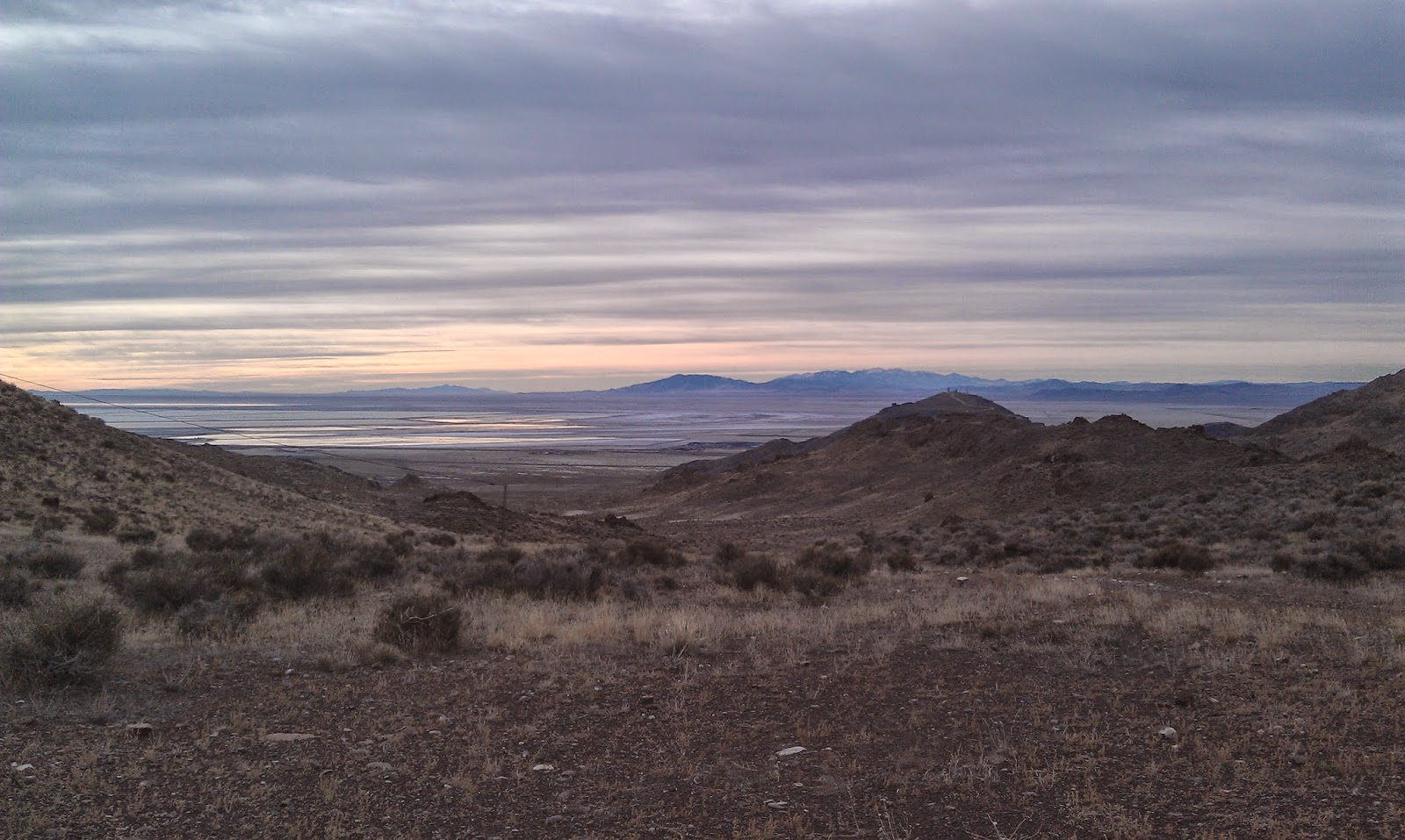 Here is another photo of Friday's run in the desert.  I love running out there, but I always worry when I head out.  I am one twisted ankle, snake bite, wild animal, or deranged weirdo out there away from something bad happening.  I am smart and let multiple people know where I am at (and have a cell phone) and when I'll be back, but still.  As they've said in the movies: Scream all you want, no one is gonna hear ya.  I also don't think there are many runners in Wendover. I've never seen a fellow jogger out there.  Although the high school does have a track team and I've met their coach (several times).
Posted by Eddie Gaul at 1:12 PM