You can read in my previous post about getting down to Vegas.  But I am now going to recount late Saturday afternoon and into the evening. 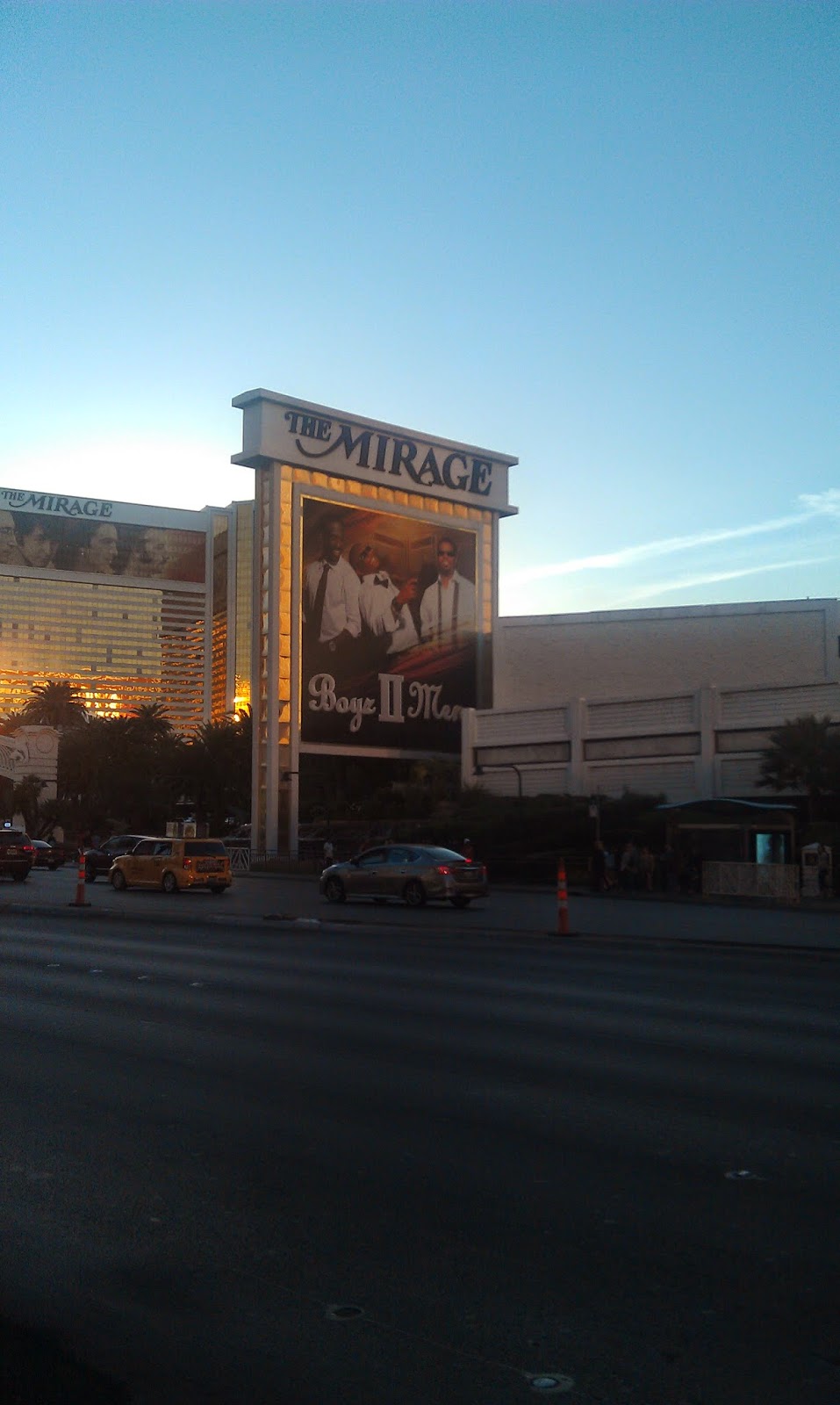 We opted again to stay at the Mirage.  It was convenient in the fact that it is close to the Las Vegas Marathon finish and I got a pretty nice deal: about $350 (excluding resort fees) for 3 nights, including a very expensive Saturday night.

I remembered about last year's experience and got a room away from the 10AK club.  Their bass, late at night, can be heard through the flooring, despite being 5 floors up.  I hardly got an sleep the nights the club was active and upon checkin I requested a room as far away as I could from the place.  We had a gracious clerk who honored our request and I want to say that I slept very well each night we were there.

After unpacking and settling in, I called my friend from Illinois, Dennis, to see if he wanted to hang out for the evening (he lives near Fremont Street now).  He was all on board and told us to go downtown and we'd explore Fremont Street together.

I opted to take a bus down there.  Vegas traffic is nuts and I am not used to it.  For $16 round trip we wouldn't have to worry about getting lost or parking.  Money well spent in my opinion.

The bus was crowded and they were on a special system that day, due to the Marathon-5K being held at the SLS (formerly the Sahara Casino).  The bus route ran by the finish line and I could really tell that the Competitor Group really went all out on this (I wasn't willing to pony up $50+ for a 5K though).

About 30 minutes later we arrived downtown.

I've only spent a bit of time downtown.  Usually it is in the afternoons and mostly I've gone with Shari to allow her a chance to trinket shop.  Supposedly they have better gambling there (in terms of player favorable odds) but I've never had much luck there.

Dennis met us and we wandered around the downtown area and debated on where to eat.  I was surprisingly hungry and didn't really want to go through the ordeal of ordering food so we headed over to the Main Street Casino.  With a little help from online reviews, we discovered that their Garden Court Buffet was reasonably priced and got decent reviews.

We made the walk over there, signed up for the loyalty card to save a buck or so off the buffet and a few minutes later we were eating.  We paid less than $20 for the meal for the two of us and I'd certainly eat at this buffet again.  The premium stuff seemed to be in short supply and I wished they had ready-to-eat-shrimp, but alas, that is what you get for a bargain priced buffet.


I didn't gorge like I usually do, but I certainly did justice and I felt like I ate my $10 worth.  After eating we took stock of the casino.  I saw mostly typical machines with some new ones I hadn't seen before.  I tried my luck on some sort of Bally Technology Game that sucked twenty dollars out of me pretty quick.  I think also put some money into another Planet Moolah, got a weak bonus round and pulled it out soon afterwards.

Not having any luck, we wandered around Fremont Street soaking in the sights.  At this point, the party was just beginning and the crowds were starting to fill up the place.  Fremont Street certainly has a different vibe from the Strip -- definitely a younger, partying, more drinking crowd. 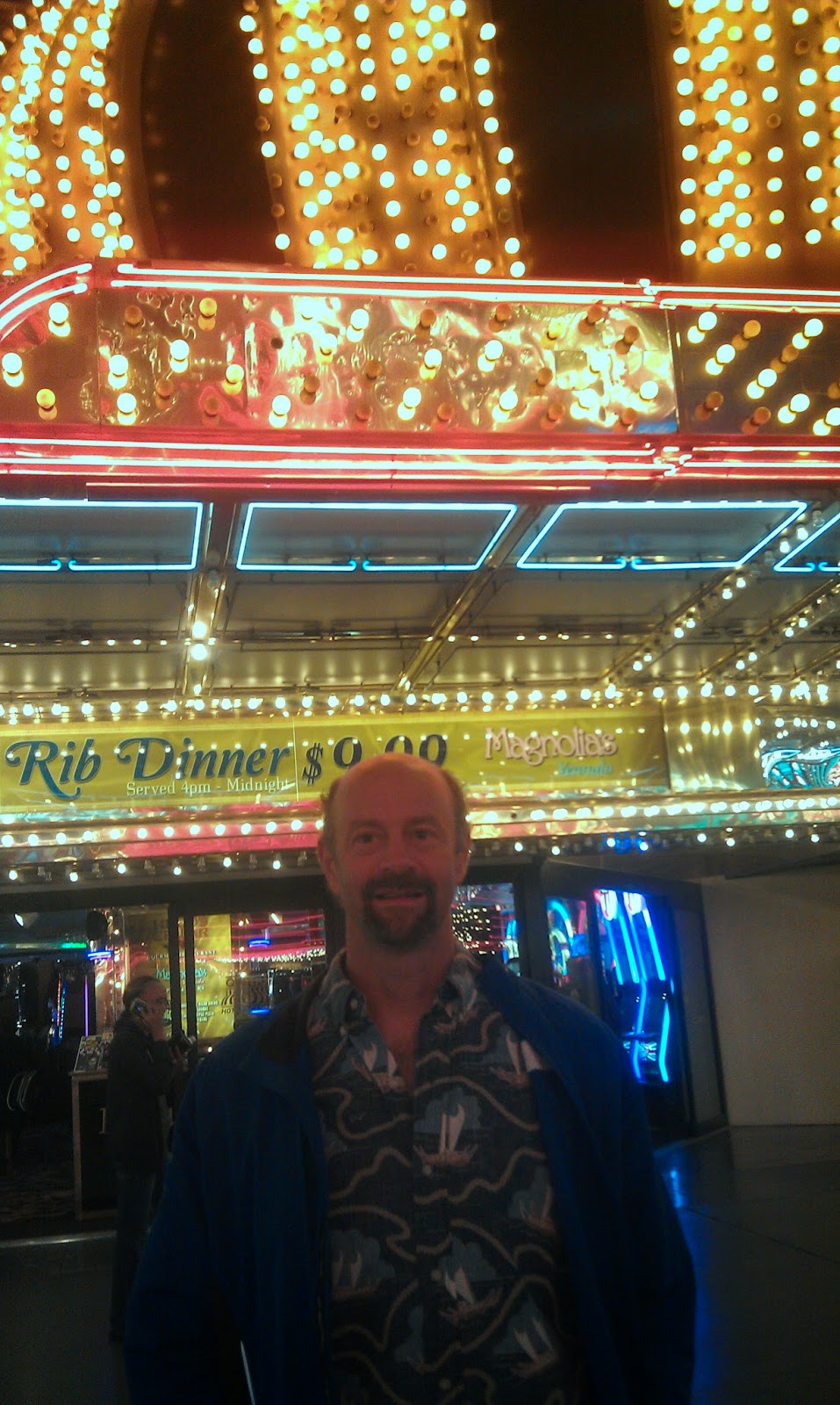 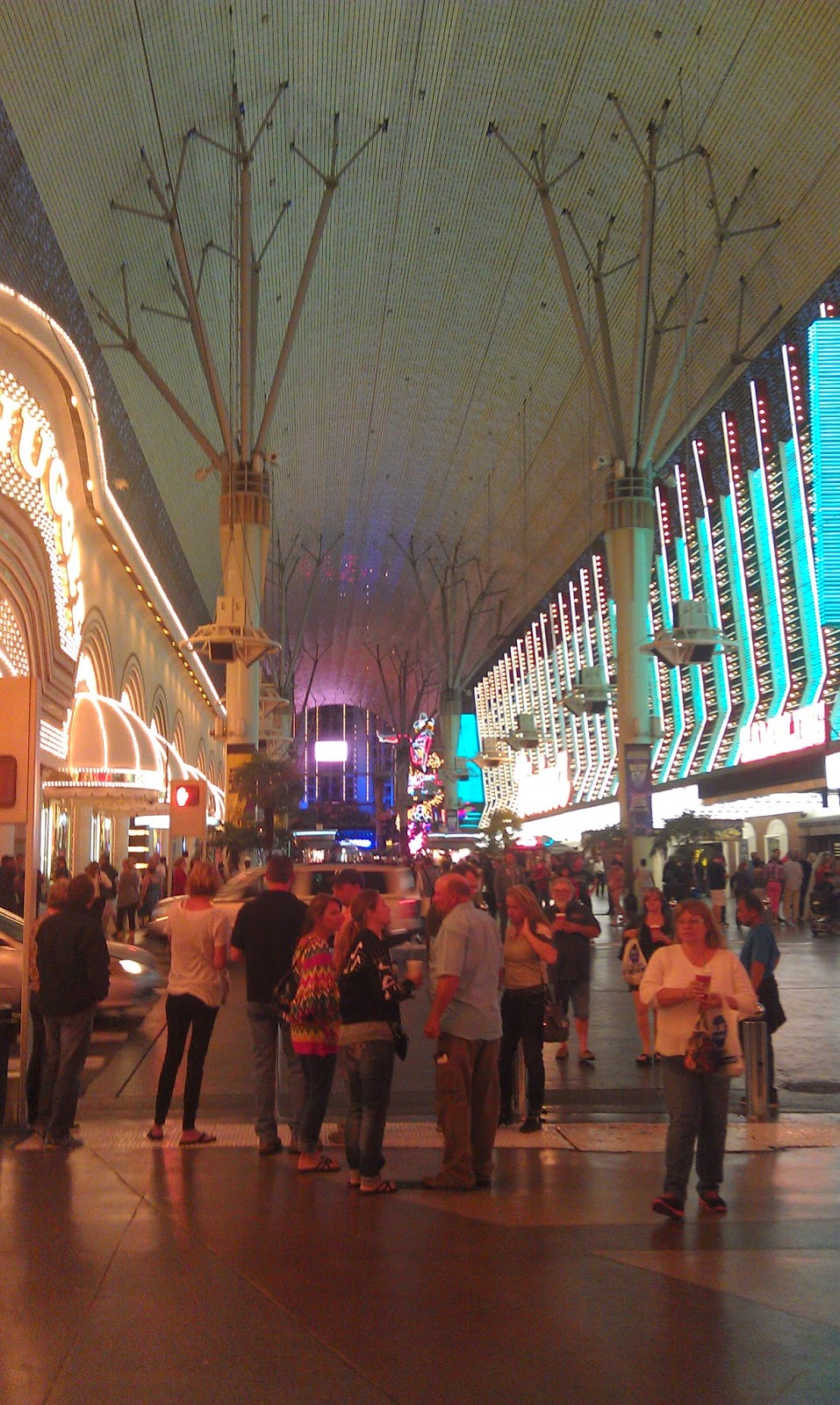 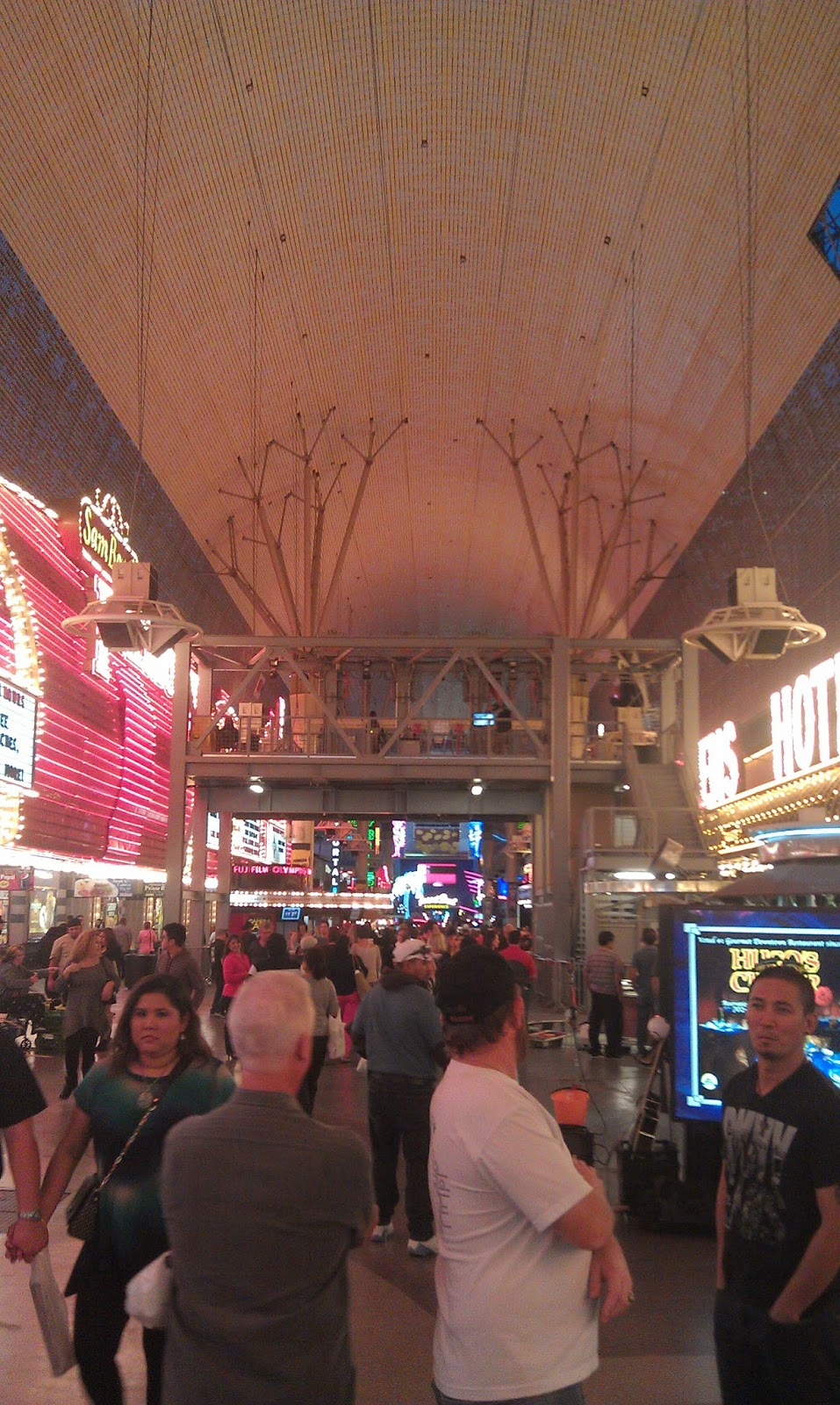 We checked out a few of the street performers, including one kooky guy dressed as a dancing angel in underwear.  Gross:

We gambled a bit in The D Casino.  They have a retro section with slot machines that actually take and give out coins.  I put in my spare change and got zilch for it but at least I didn't have a pocket full of nickels anymore.  The lower section of the casino is modern and I wound up putting $20 into something and got very little play.  I was beginning to really doubt that the downtown area was any luckier than any place else.  I did play some Mr Cashman and wound up making a very small profit.

Not having any luck, Dennis suggested we check out his place.  He lives above Fremont Street in a near-by (and somewhat famous) condominium complex.

Dennis's apartment has an incredible view.  He lives on the 28th floor and he can literally sit on his porch and check out the goings on along Fremont Street (although the bar noise at night can get bad): 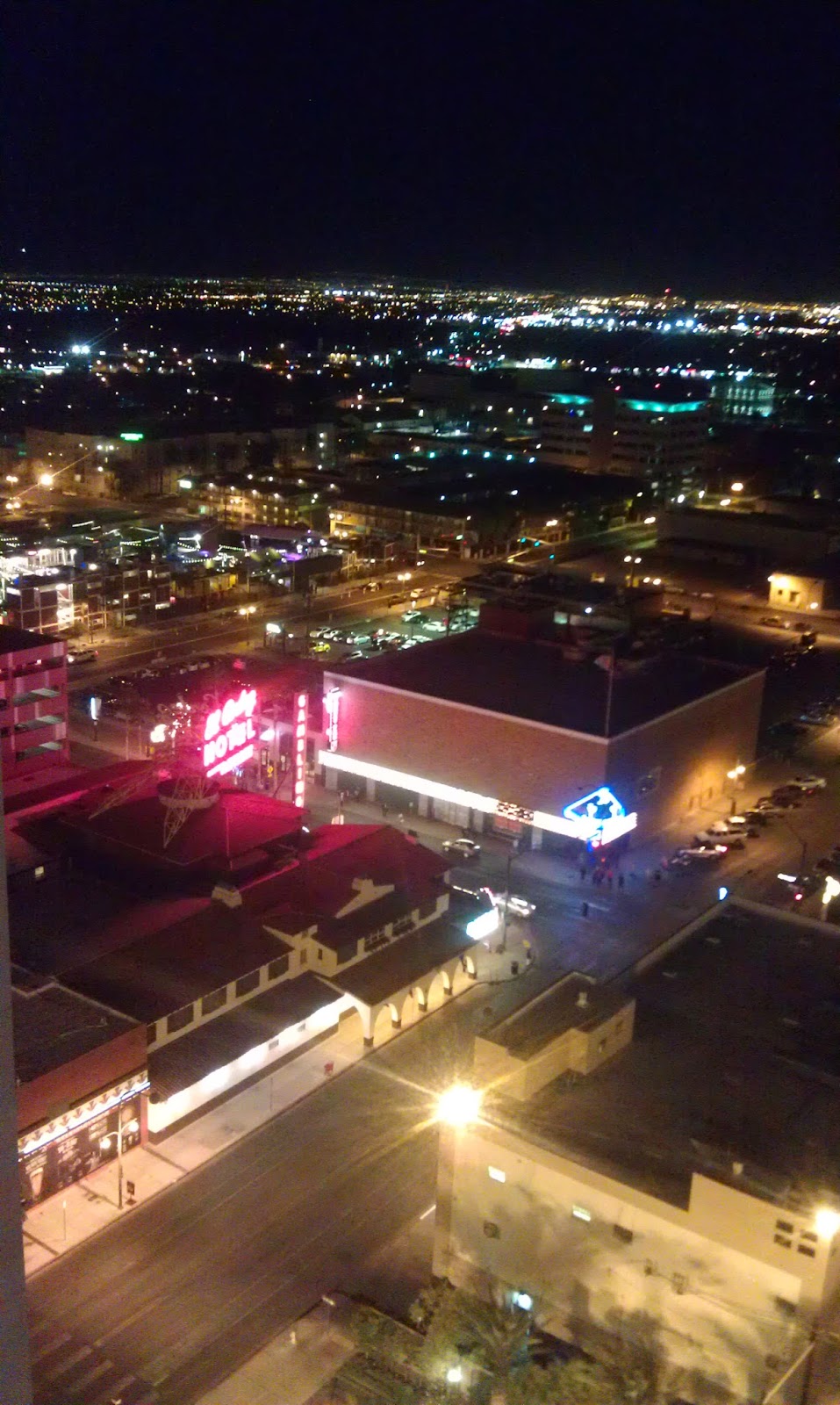 Saturday Night at the Mirage 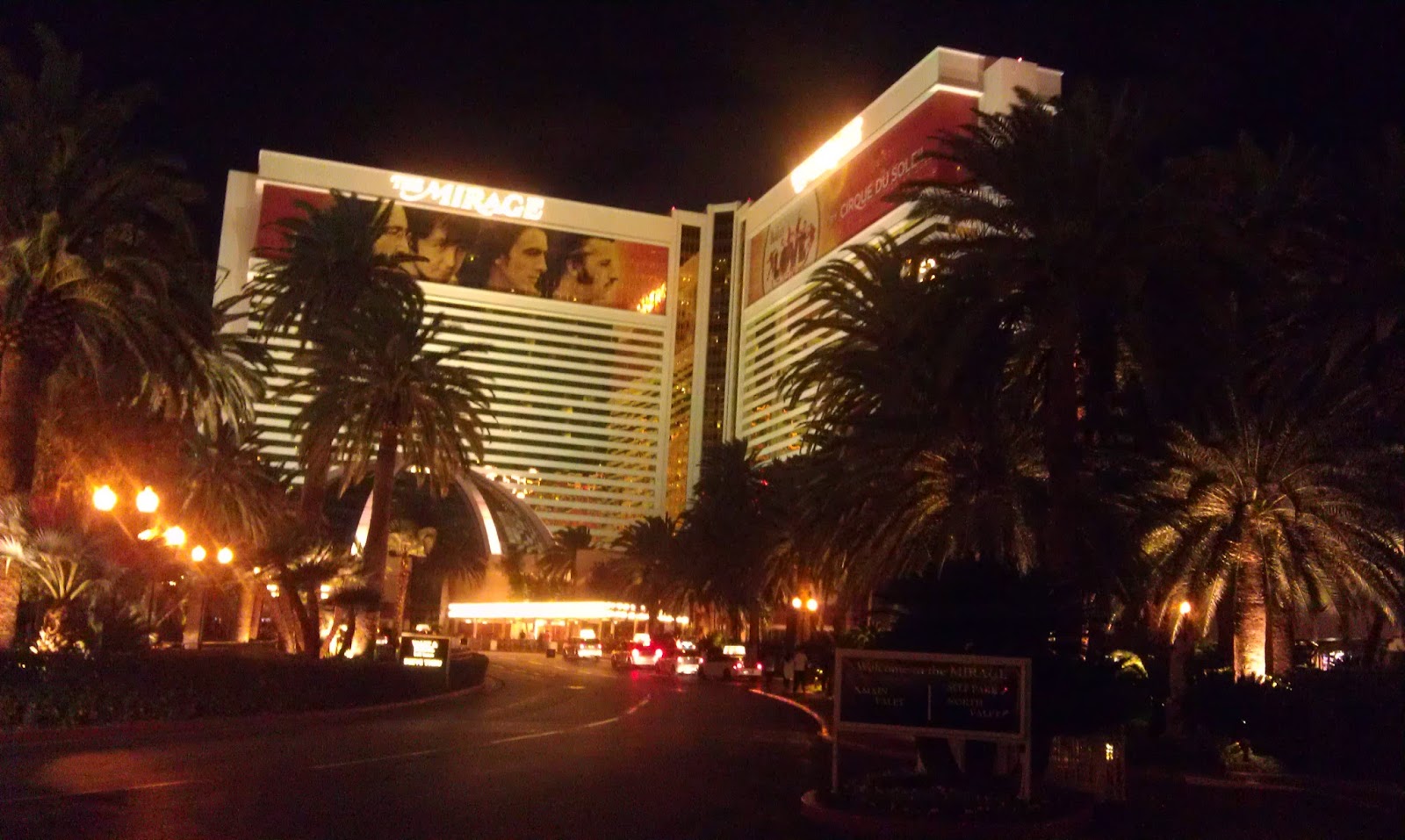 I am sort of on a boycott of the Strip.  I find their prices have gotten too high and their gambling has been too high.  I don't mind staying at their hotels, especially if it is going to save me the headache of having to hoof it far after running 26.2 miles, but the Strip used to be a bargain; now I sort of feel like I am getting fleeced.

Upon arriving at the Mirage, I figured I'd just roll into bed so I'd be fresh as a daisy in the morning.  However, I spotted a slot machine that is a sibling (of sorts) of Fu Dao Le, my favorite slot machine.  I figured that since they had this one, they likely had Fu Dao Le.

Shari and I opted to check out the casino to see what they had.  I did spot this one.  I was wondering when they were going to come up with a Dungeons and Dragons one.  I only saw one person play it, but I definitely was interested.

Then I spotted it, or I should say "them".  I bank of 3 Fu Dao Le slot machines.  I figured, why not throw $20 into one.  I was up for the day and while I realized I probably would have my twenty taken from me, at least I could prove that the Strip gambling was a rip-off.

Well, a few spins into my twenty I hit a bonus round.  It started out innocently enough when all of the sudden the screen looked like this: 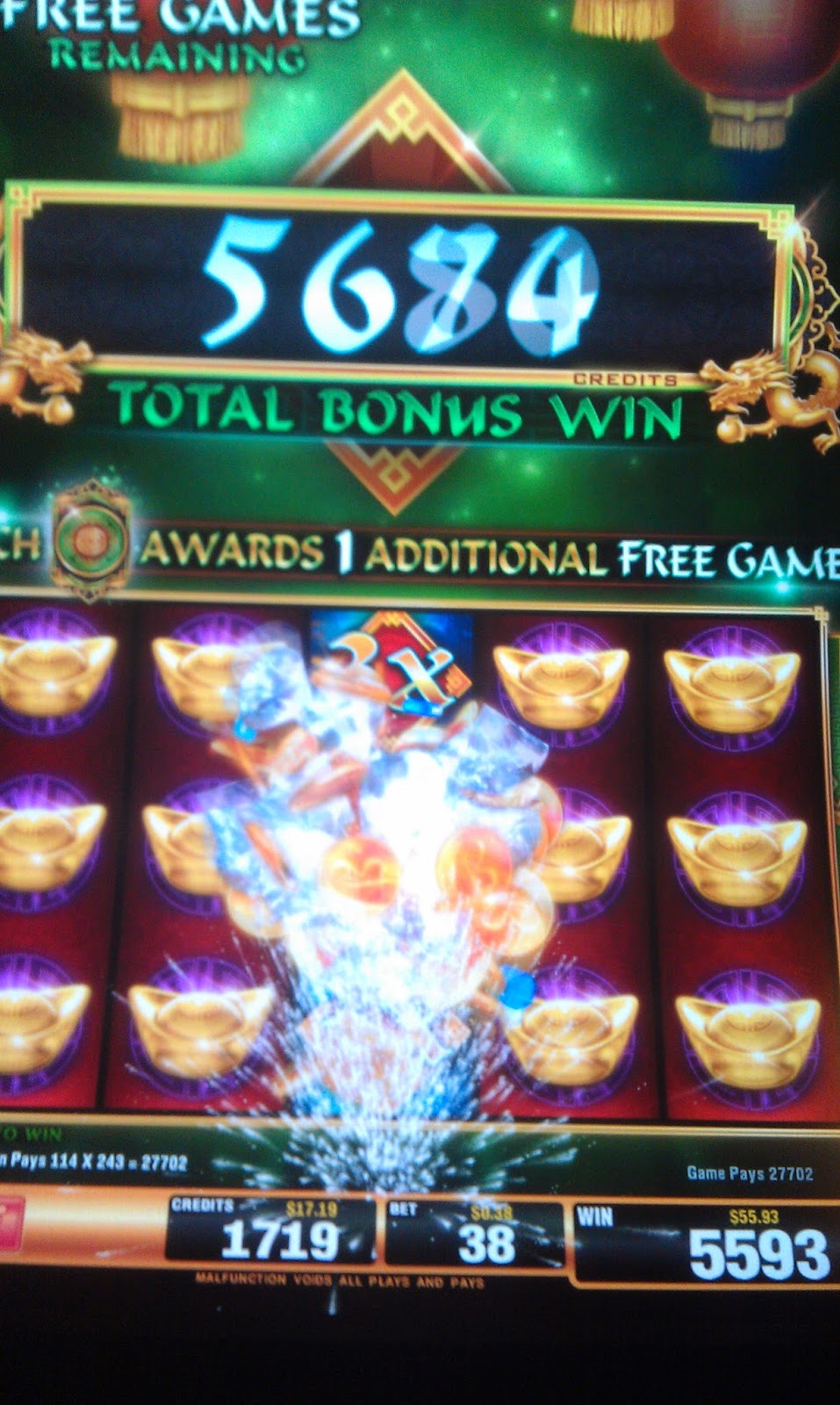 While I didn't get a good shot, the screen filled up with crowns with a 3x multiplier down the middle. Crowns are the second best symbol.  In short, this spin netted me a whopping $277 (on a 38 cent spin no less).  I just about fell out of my chair with excitement. 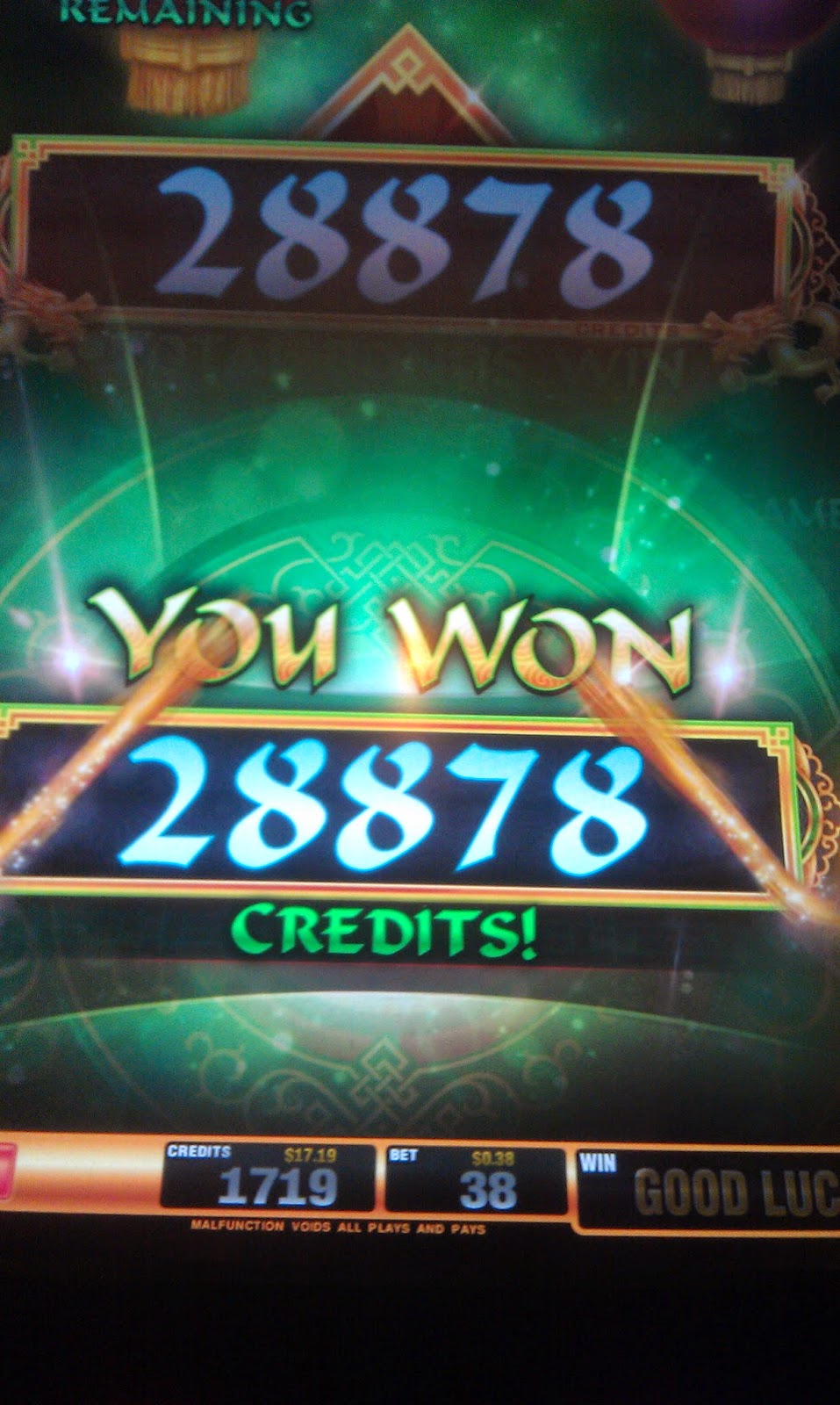 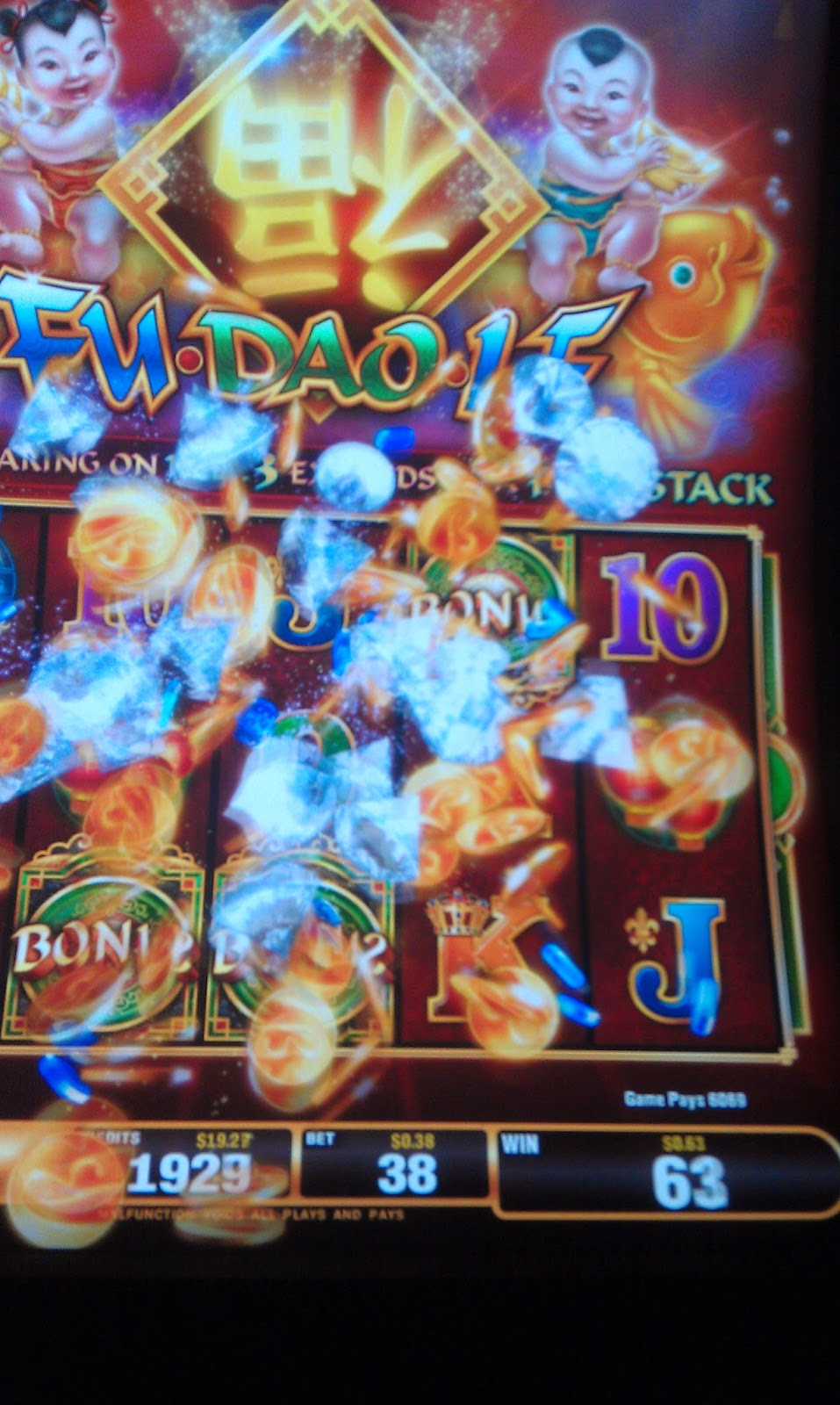 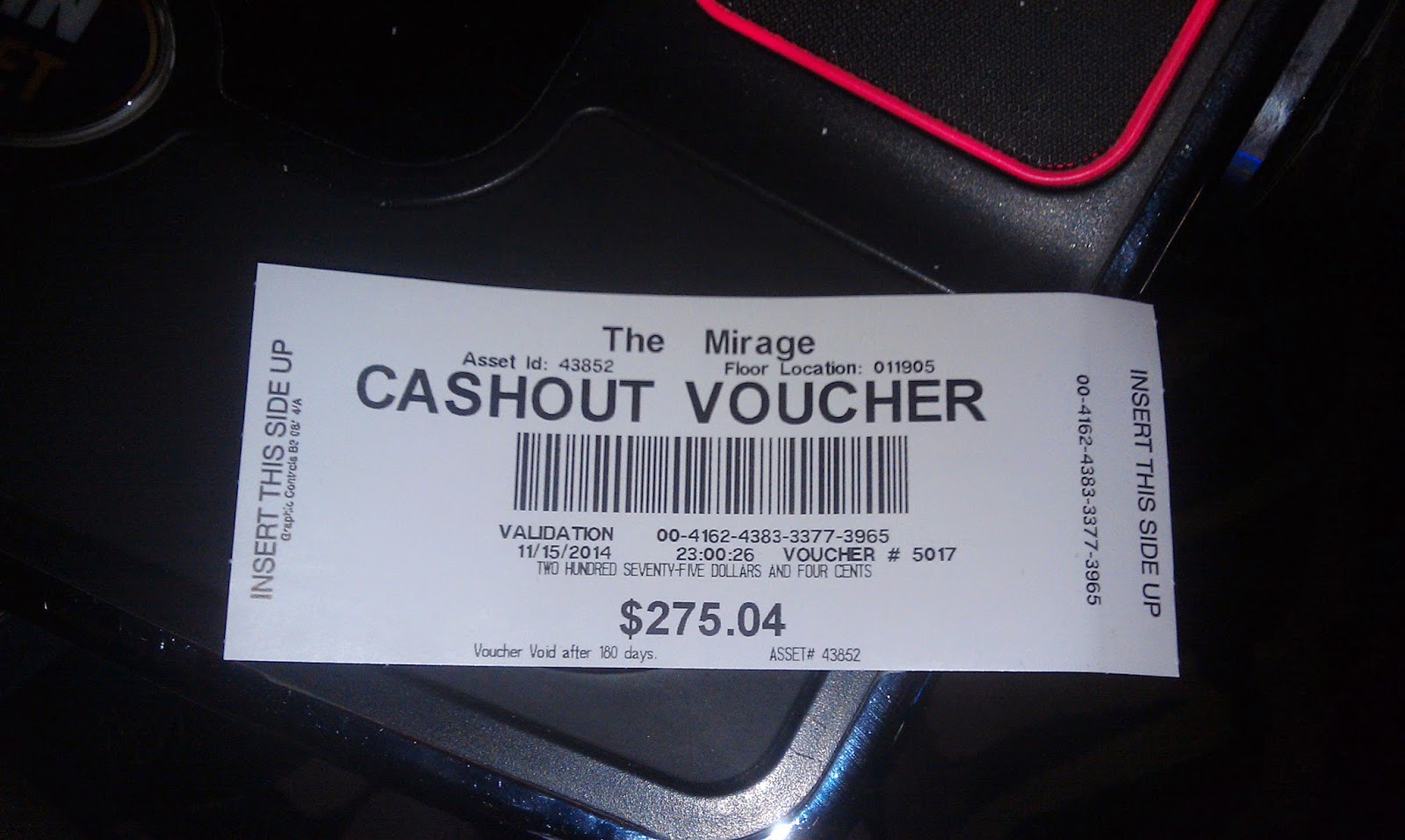 I wound up playing it down a bit, but cashed out with $275.  Shari cajoled me into putting another round of twenties in the other two machines and I quickly made some nice profits, but nothing picture worthy.

I was practically floating on air when I made it back to my room.  Shari wasn't having any luck, however.  For posterity sake, I decided to take a picture of my haul (the picture below includes money I brought with me on the trip).  I think there's over $700 there. 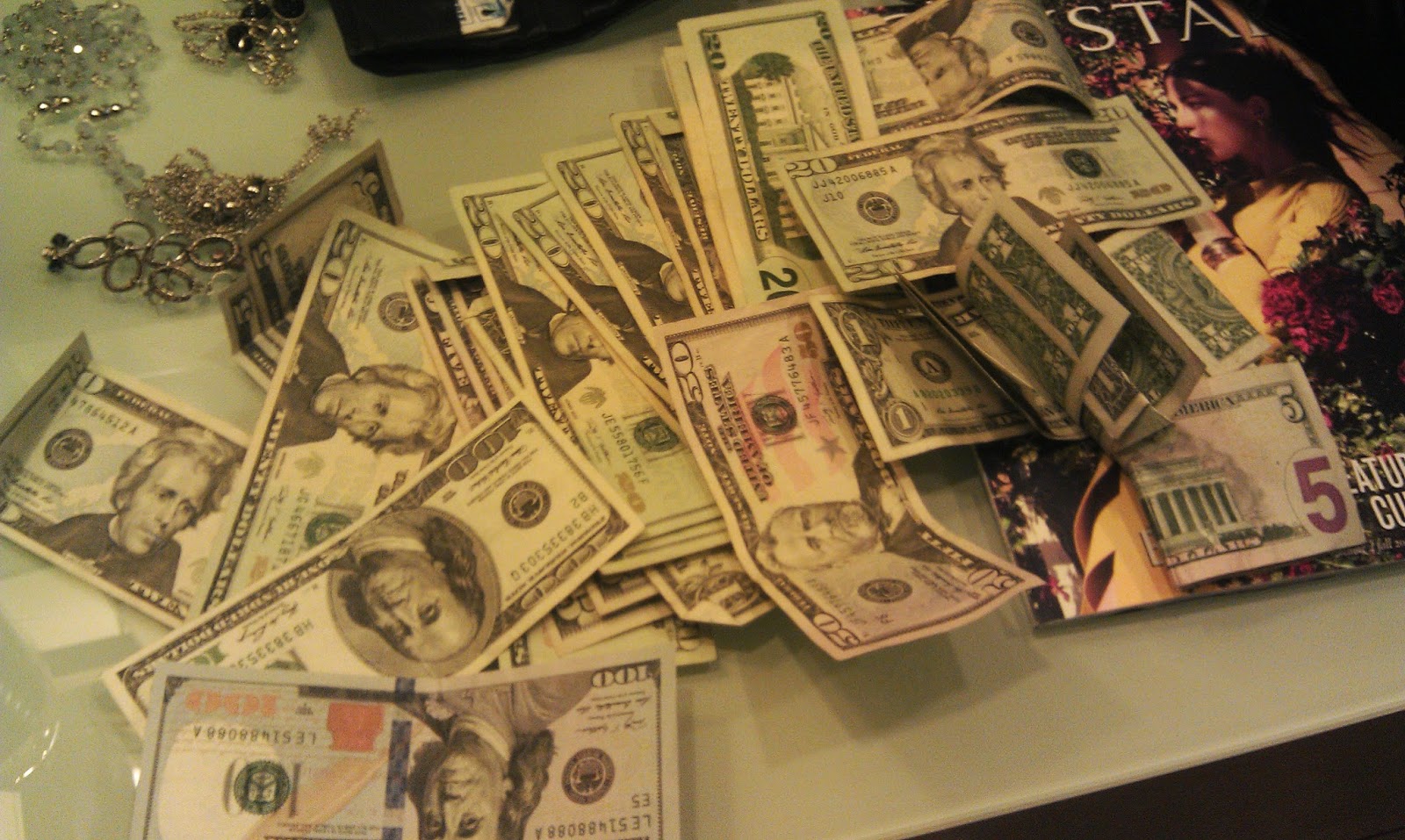