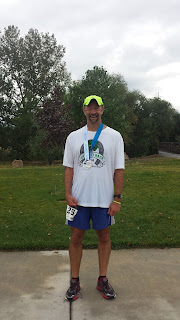 Earlier this week I received an email from a running group that puts on a bunch of races in the area that they were springing us with a bonus half marathon.  Earlier this year they had put on a full and half marathon along the Jordan River Bike Trail, where I live near and do most of my training on.

So when I heard about it and it was listed as a "no-frills" races, I knew I was very interested.  To promote the race even more they gave out steep discounts as well bringing the price down to about $25!

I was hesitant on doing the race, after all I had just done a full marathon the week before.  But my running insanity got the best of me and I decided why not, ponied up my money and figured what could go wrong? 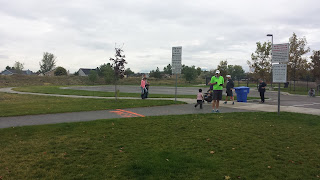 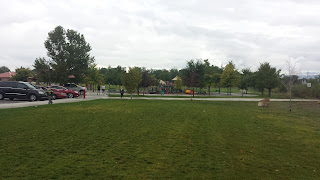 I woke up at about 6 AM for the 8AM race and ate some breakfast and headed out the door by 7 AM.  I had a whopping 2 miles to drive to the next park over.  I had my bib in another 5 minutes so I could kick back in my car and relax for a bit.

The race started promptly at 8 AM and I hit my familiar bike trail.  I knew every step of this course, so that helped in bracing myself for the hills and taking the turns at the optimal angle.

I really didn't know what I had for this race.  I hadn't run much during the week because I was physically exhausted so I figured I'd try my best and see what happened.

I was really surprised at how well I kept my pace and I certainly appreciated the coolness -- although it was a bit humid out.

This was a self supported race too.  So I was carrying about 24 ounces of Gatorade with me.  They did have cupless water stations at about the mile 3, 6 and 9.  Again, this was a no frills race and they pretty much emphasized that at race sign-up.

Around mile 9 is when I started to fall off pace.  I knew I was pushing the pace early on, but my legs were just dead at this point.

The race had a little over a hundred runners but I was surprised at how often I was running with people.  The course wasn't well marked and some people seemed to have gotten lost.  Luckily, I know the bike trail like the back of my hand and I never had any problems. 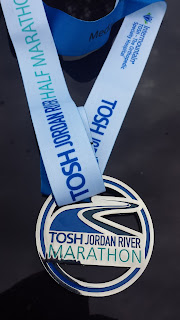 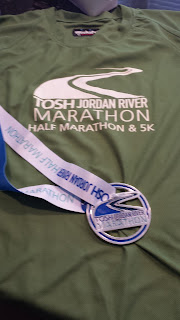 I managed to cross the finish line in just under 1:55.  Slow for me but considering that I am fresh off the marathon I did last week, about what I expected.

Like most no-nonsense races, the finish area was furnished with the basics: some candy, water, Dr Pepper and I think Rice Krispie Treats.  Also, you got to pick a shirt from some of their previous races.  I wound up taking the race shirt from the spring marathon.  The finisher's medal was recycled also from the spring race but it is certainly a keeper.  Very heavy.

Overall I really enjoyed this race, especially for the price.  There was a good sense of comraderie after the race too and I had a couple of interactions with people who recognized me from other races.  Also the race seemed to be filled with race fanatics like myself.