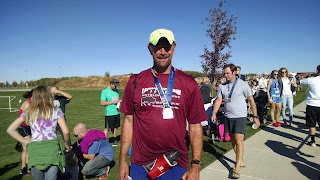 The very first marathon I did in the state of Utah (back in 2012) was the Layton Marathon.  It was also my first 4-hour + marathon.  I got really dehydrated on the course and wound up cramping around mile 22.  I came back in 2013 and did the half.  They ran the race in August and I remember just wanting to die because of the heat.  It simply wasn't my day and it was a really bad half marathon for me.

I missed the race in 2014 but looking for something to do this weekend, I opted to jump in and do the half marathon.  With cooler weather and looking to test myself on a relatively flat course, I figured why not. 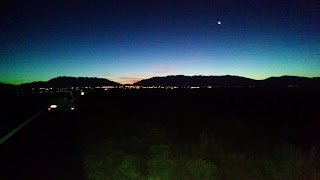 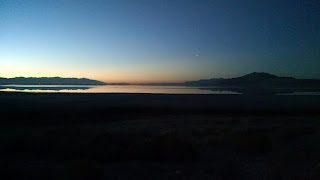 The race involves getting up pretty early and making your way to Ellison Park on the west side of Layton.  I was there around 5:45 AM and grabbed my t-shirt and bib and boarded a bus.  I was on the first bus and we wound up driving past the starting line and made it all the way to the island.  I knew where the race started and I helped direct the bus driver back to the starting line.  Since the race didn't start until 8 AM the only thing set up was a row of porta potties.

The causeway is basically a long, flat stretch of road -- about 8 miles total that separates the mainland of Utah from Antelope Island.  Normally you have to pay to enter the state park, but part of the half marathon got you entry to the island.  The full marathon starts well on the island, while the half starts about 3 miles from the mainland.

I had a little over an hour to kill.  I am glad I brought warm clothing.  I wound up chatting up another runner and the time went by pretty quickly.  There was some amazing colors in the morning: 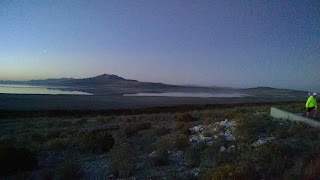 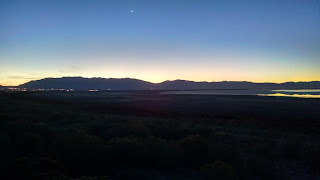 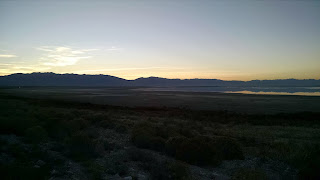 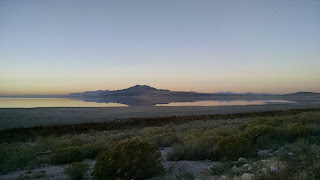 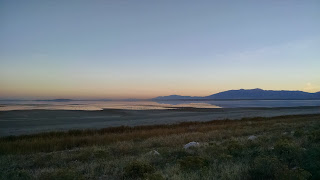 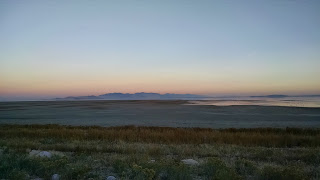 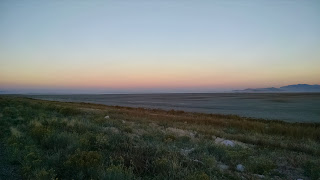 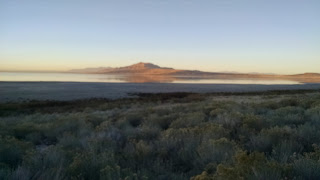 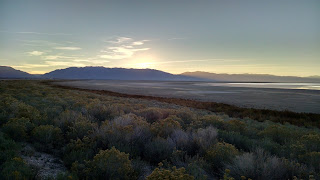 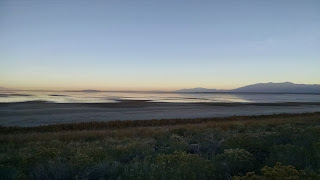 I took off at a fairly conservative pace -- even for me.  I was talking to a virgin half marathoner and told him to start cautiously.  I followed my own advice and I am pretty happy with the results.

We were running into the wind and there wasn't much of a break from it.  I decided I would go pretty easy for 3 miles and then kick it up a notch.

Around mile 3 you get off the causeway and by this time the runners are spread pretty thin.  I wasn't taking pictures of the actual course on account I was looking into the blazing sun pretty much the entire race.  I felt sorry for anyone who hadn't brought sunglasses because it was intense.  There were only a few miles where you actually ran not looking into the sun.

Around mile 6 I was picking people off and actually feeling really great.  I was down in the 8:20's and while I knew I was working, I didn't feel too badly.

Mile 9 I really started to struggle.  I had carried my own water and taken a gel at mile 6 and I just felt like even the smallest hill caused me to expend a lot of energy climbing it.  Again I was pretty much solo and wasn't getting passed.  I was feeling good too because I was passing people.  Also, we wound up picking up some 5K / 10K runners as I got closer to the finish line.

Mile 12 I was really struggling.  It was a gentle uphill climb and I felt like my legs were dead.  My mile splits were still respectable but I was dying for a downhill.

I decided to give it my all for the final mile and it helped to get a gentle downhill.  I still had a lot in the tank and I powered my way to the finish line.  It was like I got a second burst of energy.

After the race I wound up socializing a bit more and grabbed a few ice cream sandwiches.  I was disheartened to see that my age group was super competitive.  I had some hope that I would place in my age group but some of the top runners were masters.

The finisher's medal was nice -- actually their best to date in my opinion.  I also only paid about $60 for the race a week before it, so the price was certainly reasonable.  I've seen races charge $75 or more for "week of" registration.  The t-shirt was nice too (I saw last year's and wasn't impressed).

I am not totally thrilled with the half marathon course.  Sure the start is interesting, but after that it is mostly farm roads, farm fields and then eventually suburbia.  It is an honest course and it measured up well mileage-wise. 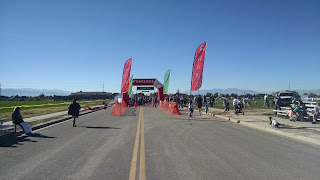 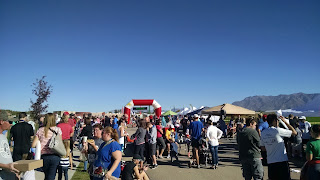 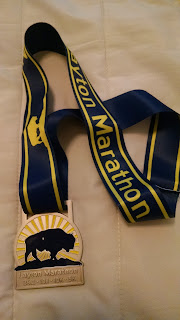 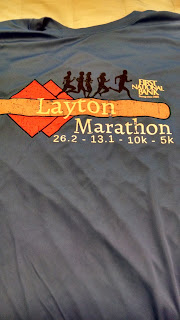