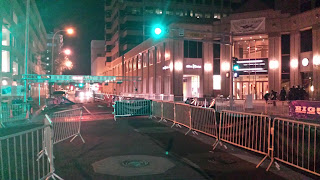 
Early this spring I was looking for a fall race to do and also the ability to knock out another state.  It was a toss up between visiting New Mexico or Colorado.  After taking some solicitations, we decided that New Mexico would be a fun place to visit.  I had never been there and the Duke City Marathon had gotten some decent reviews.  It was a flat course and it sounded like a viable way to run in New Mexico.  So sometime this year, plans were put in place and the trip was made. 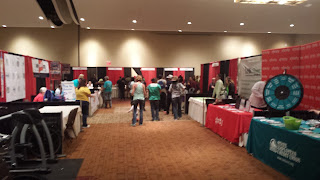 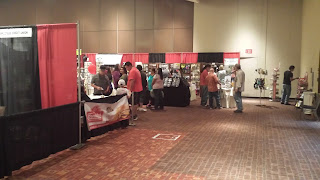 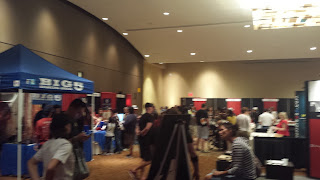 We rolled into the Isleta Hotel and Casino, the host hotel, around 4pm. Packet pickup was a snap and the Expo was certainly larger than I thought it was going to be.  There were plenty of exhibitors.  I wound up ponying up $10 for a 2013 marathon t-shirt (that I didn't need) but figured it would be a nice souvenir and it was pretty nice.

I got my bib and t-shirt and a pretty decent swag bag before checking into the hotel (I stayed at Isleta).

The hotel had a nice ballroom for the Expo but seemed like an odd choice, since the race start / finish was a good 15 minutes away.  Either way, the hotel did have ample parking and facilities. 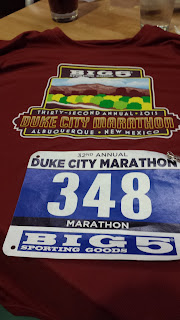 The race started at 7AM on Sunday.  I wound up getting up at 4AM and eating Wheaties and sipping on Gatorade before the race's start.  Around 5AM I drove downtown and found a spot close to the race start in a parking garage.  I didn't need to get there that early and wound up reading a newspaper and listening to a talk show on my phone for over an hour.  Time went by quickly though.  I probably could've rolled in around 6AM and been just fine.

I did venture out and find the race's start, which was still being put together from the looks of it: 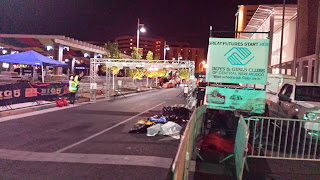 I got into the starting corral at 6:50(ish) and managed to get my picture taken by a kindly runner: 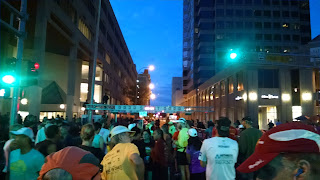 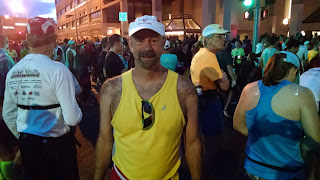 I am so glad I went with a tank-top.  It was a little chilly at the start but once the race started I warmed up.  I saw a lot of people in long-sleeves and / or full length shorts and they wound up really paying the price later in the race when it got really warm.  Also many people were in black and that probably baked them.  If you do this race, wear sunscreen as there isn't a lot of shade.

The first two miles or so are through the downtown Albuquerque area.  It is definitely an older part of town and I really enjoyed this section.  The downtown area eventually gave way to an older, but seemingly well-to-do residential section.  The architecture was older but it seemed well kept up and nice. 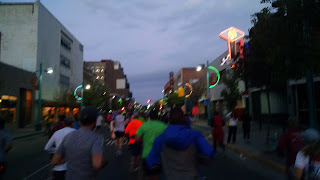 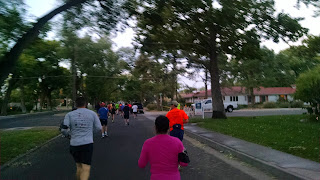 (Sorry for the blurry pictures - I was snapping pictures while running).

After 2 miles or so, the route gave way to the paved Paseo del Bosque Trail.  This trail reminded me somewhat of the bike trail that I run on near my house.  On one side you have the railroad and on another you have a wooded / scrub section.

The half marathon started about 15 minutes after us and the leaders of that race were passing us by mile 4.  It was sort of disconcerting to see racers of other paces flying by.  But I just managed to keep my pace and chug along.  Also, there were a lot of relayers, so again, you had people running different paces around you.

The race provided Gatorade stops at weird intervals (roughly every 1.5 miles or so) -- there didn't seem to be any rhyme or reason to them.  However, there was PLENTY of them.  They were serving the endurance formula and water, which I think really helped.  I was disappointed that none of them had any gels, but I had brought my own, so I was fine.    Mile markers were pretty much spot on and visible (although I missed mile 1's marker)

Crowd support was decent but not mega-marathon style.  The biggest crowds were assembled at the marathon relay parts and I got a nice boost from people waiting for their relay partners.

Unfortunately, there weren't many bathrooms on the course.  Most races have at least one porta-pottie at each aid station but I only saw them well off the course and at the marathon relay sections.  They also had at least one or two people (and in some cases a dozen people) lined up waiting.  As a guy I could hit the bushes pretty easily (which I did) but if I had other bathroom needs I would be hard pressed.

The early miles were really peaceful along the bike trail and it was fun seeing the hot air balloons hanging in the distance: 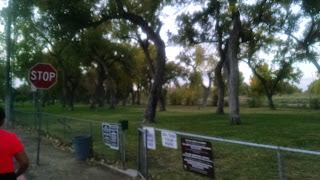 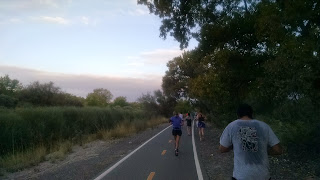 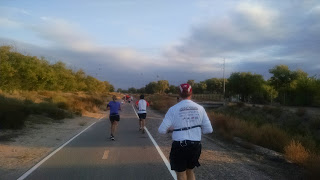 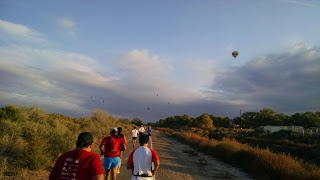 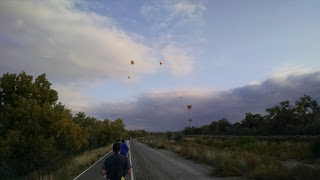 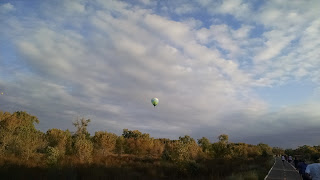 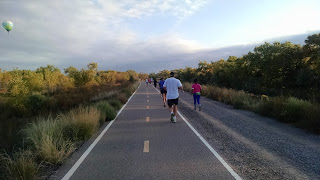 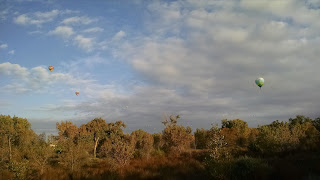 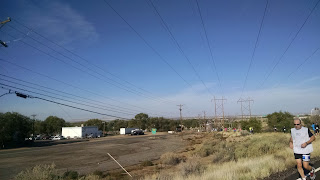 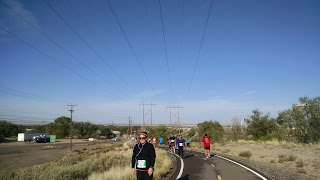 I reached a hard part in the race around the half way point.  Here you have to climb some freeway overpasses and the hills and the heat seemed to really get to me mentally.  Looking back at my times at this point, my mile splits were right on, but I felt like I was really dragging here.

Once I reached the turn around point, I got a bit of a downhill before leveling off into the flats.  I really felt empowered here and I got a nice second wind that lasted until about mile 20.

I could feel my pace slip at mile 20.  It just felt so incredibly warm and I was starting to panic a bit.  I was hoping I would finish below 4:10 and I hadn't really been looking at my overall time.  The sun was blinding and I didn't really feel like doing math.

I was passing people -- most of which I could tell where taking a hit from the sun / heat.  It definitely wasn't as bad as other warm races I've done, but it was warm.

Finally the bike trail ended (it was an out and back course) and I knew the finish line was coming up.  While I am not a super huge fan of out and back courses at least with this race I knew what was coming up.  Mentally I was really struggling but I was really happy to cross the finish line and this was one of the faster marathons I've done recently. 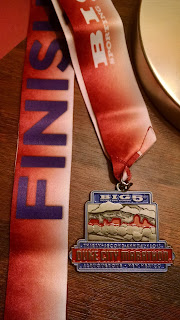 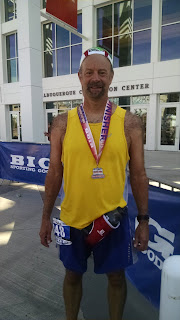 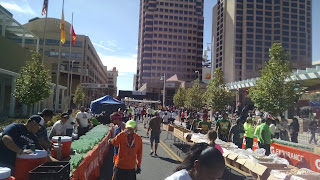 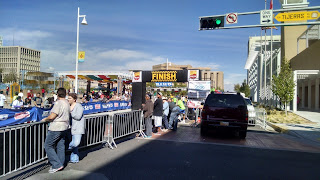 There was good crowd support that pushed me to the finish line.  I was really impressed since most of the half marathoners had already finished that there was that much of a crowd left watching the 4 hour marathoners finish.

The finish area had bananas, oranges, more Gatorade, water and chocolate milk (plus bagels).  I was hoping for cookies or chips.  They had plenty of food though setup despite my 4+ hour finish.  Usually the marathoners get the short end of the stick, but I had plenty to eat.

I wound up circling the finish area for a good 20 minutes and staying close to the medical tent.  I am now super cautious about finishing and suffering from blood pooling / fainting -- especially on a warm race.  I didn't have any issues whatsoever.

I wound up sitting around for another 10 - 15 minutes chatting with other runners before heading to the car.

Overall, I liked this race.  I was hoping for a little bit more food at the end (something other than typical race fair).  Some people may have found the bike trail monotonous, but I actually liked it.  It was really flat and I wound certainly describe the course as accurately measured and a fair course.  I ran a bit long when I stepped off the course to use the "bushes"  Also, I was surprised there wasn't any intermediary timing mats.  In theory one could cheat by turning around.  For the most part, though, I was always within site of someone throughout the entire race (there were a few lonely miles around mile 20 though).

The bathroom situation definitely needs some adjustment.  They didn't have enough even at the start as I saw several long lines.  Again, this isn't a problem if you are a guy but the ladies were definitely at a loss.

The race should also consider starting 30 minutes earlier.  It got a bit toasty and starting earlier would've been nice.

I liked the medal and t-shirt and would recommend this race for those looking for a marathon in New Mexico.

I felt like I could have run a lot faster but I think the heat and the elevation got the best of me.  I think this bodes well though for Vegas, which should have more ideal conditions.
Posted by Eddie Gaul at 7:09 AM