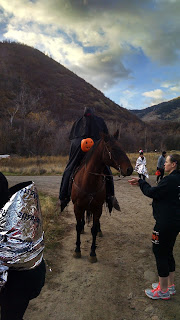 
Normally I am not big on downhill themed races.  Utah is filled with the massive downhills and yeah,  you can get a great time, but more often than not, I wind up sore for days and it derails all my training plans for the upcoming week.

However, I was really looking for something to do this weekend and I hadn't raced in two whole weeks so I figured why not jump into the Haunted Half.

The Haunted Half has two races in the area: one in Salt Lake and one down south about 30 minutes from my house in Provo.  The SLC one is a pretty solid downhill while the Provo one is about 1250 feet of decline.  Sure, I'll pay the price for it, but it won't be that bad.

The other thing that has caused me to take pause in this race is that it has a long wait.  You load a bus between 6 AM and 7 AM and they drive you twenty minutes up a canyon and then you wait until 8:45 for the race to start.  That isn't my idea of fun.

Either way, I did decide to take the plunge on this race after seeing the finisher's medal and I also had a friend of mine who was willing to pick up my bib for me (saving me a trip to Provo). 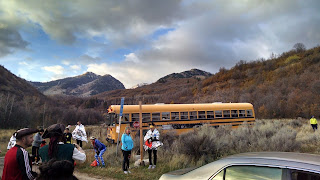 The race starts at about 5860 feet of elevation.  I am not exactly sure what sub-canyon we started in but suffice to say we followed a service road for about 4 miles before getting on the beautiful Provo bike trail system.  If you haven't had a chance to drive, hike, or visit Provo canyon, you are missing out.

It had been a while since I've been there (I think we drove through it in 2012).

I was on the second bus up there and was dropped off at 6:45 -- meaning I had a two hour wait before the race's start.  Thank goodness I found my friend JE and got a seat on the cold ground close to the fire pit.  I had brought plenty of clothes up there and I was fairly comfortable and as it always does, the two hours went by pretty quickly.

Once the sun was out, I managed to get a few photos of the starting area: 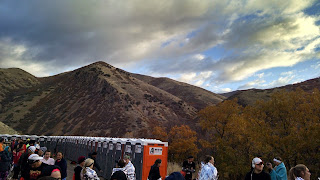 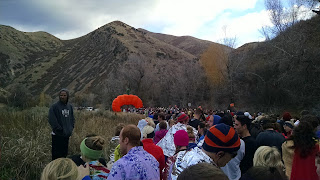 I got a late jump to the starting line and it cost me some time as I weaved through the slower starters.  It was all good and after mile 3 I found I could run at my own pace.

However, as I got going I realized my stomach wasn't happy.  I had eaten a ProBar about 30 minutes before the race and maybe it didn't sit well with me.  I've eaten them before a run, but never before a race.  For some reason it just sat in my gut and churned.  By mile 6 I was sort of hoping I'd just put and be able to go on my merry way but it was more of a stomach ache.  It really curtailed my breathing and by mile 11 it felt like I had been kicked by a mule.


The first few miles were blazing fast and it seemed effortless to run.  Most people were in costumes.  I opted with two tech shirts (black and orange) with Halloween insignia on it.  So much for being festive.  Despite the growing unpleasantness in my gut I was really hoping for something (anything) sub 1:50.

The first aid station at mile 3 didn't have any fluids.  They were passing out dum dum suckers.  What the heck...  I hope I wasn't going to get stiffed on this race.  But I am happy to report the rest of the water stops were amply supplied and crewed.

After about 4 miles we were dumped on the Provo multi-use trail.  Basically a paved bike trail.  The hills stopped being brutally steep and now it became a gradual descent.  Definitely easy on the joints and you were able to carry on a decent pace.  We did get to run by the Bridal Falls and a few other prominent landmarks.  I snapped pictures as I was running: 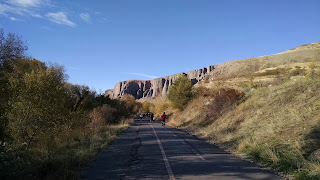 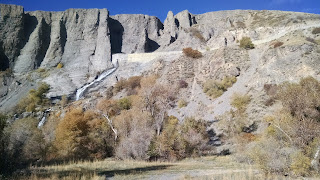 The last few miles were on more residential bike trail or even sidewalk.  I did get held up at mile 12.5  You have to cross a busy intersection and at roughly mid-morning people were out doing errands.  The police basically restricted people from crossing to give time to cars to get by.  I lost about 20 - 30 seconds here and honestly I didn't mind too much. I was pretty much spent and my stomach was clearly not in a good mood. 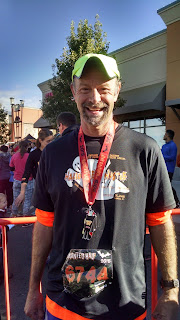 This was a big race.  There were over 1650 half marathoners so crossing the finish line felt like I was at a major event.  The finish area was a bit congested but overall I liked the party-like atmosphere.

Upon finishing, I walked around and my stomach finally rebelled a bit more.  They had pizza (with pepperoni on it (pass)), chocolate milk, water, apple juice (gives me cramps) and bananas that looked a bit too ripe.

The shirt is 70% polyester and 30% cotton.  Not a true tech shirt, but definitely worthy for some training days.  I absolutely love the medal and it was probably about 50% of the reason why I ran the race.  In fact, it easily ranks in the top 3 of my favorite medals.  They also gave away the throw away gloves which are actually worth keeping.

I paid $70 for the race and I registered a few days before the registration close.  I probably wouldn't have run this race except someone picked up my bib for me.  I absolutely loved the course and in fact it probably ranks in the top 5 of my favorite Utah courses.

Course measured a bit long for me and the first few miles were congested.  Shame on me for not getting to the starting line a bit earlier.

Overall, I had a good experience here and would run this edition again. 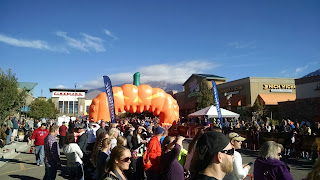 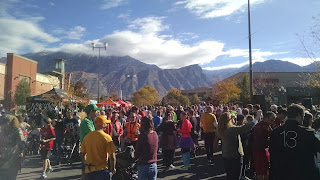 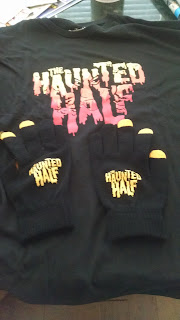