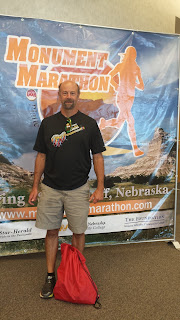 First off, this is sort of a blow-by-blow of what I did while on my trip to Nebraska.  I suspect most of you won't find it too interesting, but I do like to categorize my left over photos.

This chapter also helps me remember of what I've done and where I've been.  It is amazing how many "little" things that one forgets over time.

First off, I went to Nebraska solely to run the Monument Marathon.  I wanted to complete my tenth state and 21st marathon.  Being that Scottsbluff Nebraska is a 7.5 hour drive from Salt Lake City and I made the plans and headed east.

I took the day off from work all together.  I wanted to get into Nebraska before night time in order to pick up my bib and potentially see whatever I could of the area.  I had a limited amount of time to see everything and the clock would be ticking.

I rented a car and was headed east by 9 AM.  It was smooth sailing and I managed to make a quick stop at Echo Reservoir, in Echo, Utah.  Normally the water levels around here are a lot higher, but with the shortage of rain we've had, it was a fraction of its normal self. 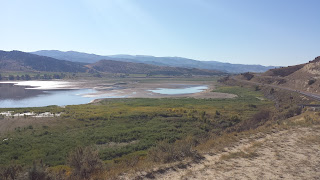 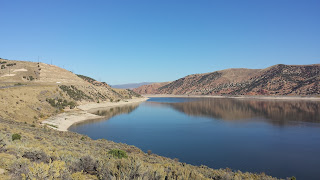 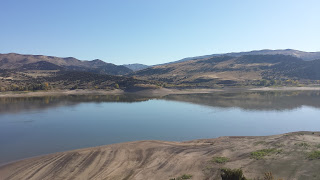 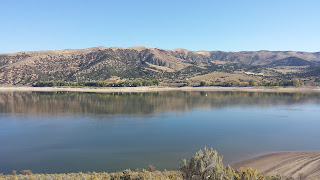 After that, I continued driving into Rawlins, Wyoming.  I still have fond memories there when I visited the old state penitentiary on my way to Casper Marathon.  I wound up gassing up there and eating at the McDonalds (hey I was in a hurry).

Once I got to Cheyenne and started heading north, the road became unfamiliar territory.  When I moved to Utah from Illinois in 2012, I traveled I-80.  I'll be honest, I-80 isn't very fun to drive on and is pretty dull until you cross into Utah.  It's like someone turned the beauty levels to 10 a few miles into the Utah border.

I rolled into Gering Nebraska just after 5 and managed to pick up my bib and a huge swag bag filled with goodies. 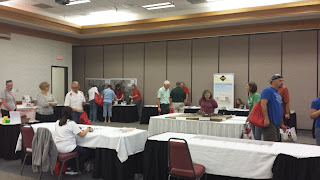 I had a little bit of a hard time navigating my way around Gering / Scottsbluff.  The roads just didn't seem to be as well lined up as say Salt Lake City.  There were a few times when I had to pull off to the side of the road and check my phone's GPS to figure out where I had to go.  Luckily, it wasn't terrible but the signs seemed hard to read and the layout of the city wasn't natural.

I debated on doing the spaghetti dinner, but I had heard that the Scottsbluff National Park was open late and for free.  Once again, sensing a ticking clock as far as touring went, I opted to journey to the park, which was a mere 5 minutes away from the Expo.  You can see the pictures here.

Blown away with the natural beauty, I decided to go to the Hampton Inn and Suites, where I was staying in Scottsbluff.  I took the slow way there and got stopped by every light and stop sign in town (I think).  I soon found out that if you don't take the highways around town, it is slow going.

I didn't have any problems finding it.  I was greeted with a pretty cool sign too: 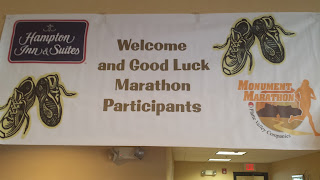 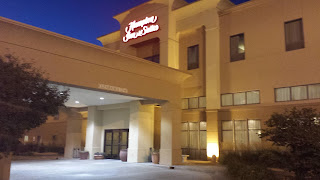 I decided to keep dinner quick and easy so I crossed the parking lot and went to Perkins for some salmon and fries.  It was a bit pricey but it was quick and hot. 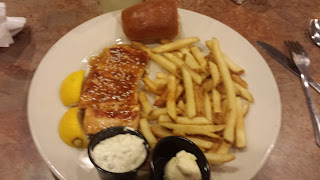 I went back to my room and crashed.  As usual, I slept poorly despite taking a sleep aid.  I think between driving all day and being anxious about the race caused me to toss and turn most of the night.  I always set at least two alarms but part of me worries that they actually won't go off.

Thankfully, I was by myself and could turn up the AC, but even that didn't seem to help.  Luckily, the race didn't start until 8 AM and I did get some rest until 5 AM. 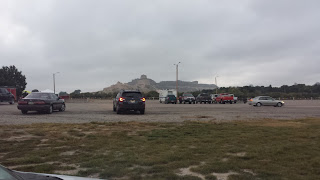 First off, I ran the marathon, which you can read about here.

After making sure I was okay, I  made my way back to the hotel.  While I was disappointed with my time, I was happy to have run such a beautiful course and got another state knocked off my list despite the trying conditions.

I quickly showered up and decided to once again keep things simple.  I had filled out a survey for the Perkins Restaurant and therefore had a 10% off coupon.  So I crossed the lot again and sucked down a ton of iced teas followed by a large breakfast.

I love pancakes after a long run and Perkins has good ones.  I opted out of the meat option so they super-sized my eggs and hash browns and threw on another pancake for me . Sadly, I was defeated by this plate, but I finished about 95% of it. 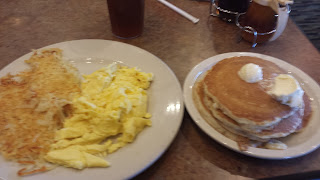 After eating I went back to the hotel and got my bearings and went out and visited Chimney Rock and Jail Rock and Courthouse Rock.

Most of the trip there was mostly lonely stretches of highway punctuated by farms and ranches.  I did drive through Bridgeport Nebraska and it was something out of the Twilight Zone.  I didn't see a single soul in the yard or on the street (except driving).  It was sort of nostalgic with older buildings and mills and such.  I think I'd be really bored living in a town like that and I often wondered what people did for "fun" 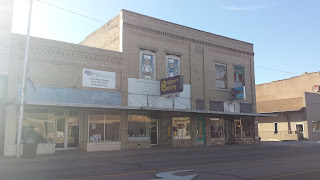 Once I got back to the hotel, I realized it was getting late.  I was so exhausted from the run and the heat.  I managed to get down to the pool though and sit in the sauna for a bit: 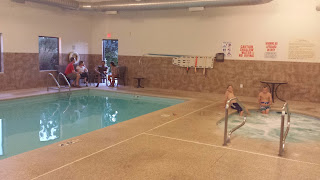 After cleaning up, I decided I had to try some of the local cuisine.  I didn't want to drive too far and debated on Chinese versus Mexican.  Fortunately, I picked Chinese and wound up driving about half a mile down the road to the Wonderful House in Scottsbluff.  The outside doesn't look like much but the inside was cozy and clean.

I was a little worried about having to wait for food (I was waffling between starving and being turned off from food) but once I got there most people were in the process of leaving. It was nearly 8 PM when I arrived and I had hot food in front of me by 8:15.

I ordered a Szechuan tofu dish that was awesome (and reasonably priced): 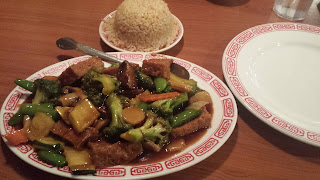 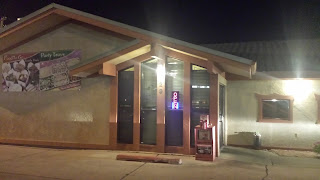 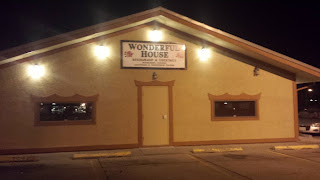 After eating, I went back to the hotel and worked on my blog and didn't get to sleep until almost midnight.

Sadly, it was time to go home and while I figure I had seen all the cool things the immediate area had to offer, I sort of suspect I had left somethings undone.

In the morning I ate at the hotel's continental breakfast.  It was passable and managed to keep me well fed throughout my ride back home.  I will say that I would recommend the Hampton Inn to anyone staying for the marathon.  It was about a 10 minute drive to the race start and the hotel was very clean and comfortable.  They even had bananas out for all the runners and it seemed like they really catered to us.

The drive home was pretty uneventful and I had less anxiety about driving home than I did driving there.  I spotted a bunch of areas I'd love to explore more, especially in Wyoming.  So many things to see, so little time...

I wound up gassing up and eating in Rock Springs, Wyoming.  And like most of my "big" races, this trip was no different in that I stopped in at a Golden Corral there: 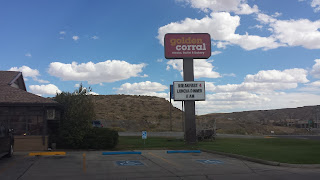 I was there midday and the food turnover wasn't the greatest.  I'd eat there in a pinch again, but it definitely wasn't my favorite GC.

I wound up getting home just after 6 PM and I was never happier to return home.

Just a really good trip that had me excited about seeing new things and breaking my preconceptions about Nebraska.

This was a really nice trip.  A lot of people looked at me like I was half-crazy when I said I was going to Nebraska for the weekend.  But I am happy to report that what I experienced was a trip well worth taking.

The marathon, while definitely not my best in terms of performance, gave me a lot of confidence in the fact that I could gut through anything, and I did have a good time.  People there were incredibly friendly: from the runners to the volunteers.  Nebraskans are certainly a cheery folk.

All told, I paid about $70 for the car, $200 for the hotels, $75 for food and a $100 for the race (I registered the last day you could).  While definitely an expensive weekend, I had a great time and would definitely recommend this marathon to those looking to race in Nebraska.
Posted by Eddie Gaul at 5:28 PM