Well, in my quest to run a marathon in all 50 states, I spotted the Monument Marathon in the back of Runner's World Magazine.  Needing to knock off Nebraska, I figured since I was trained for a marathon, wasn't too beat up from Jackson Hole's Marathon, and had a few extra bucks, I opted to jump into this marathon pretty much at the last minute.  From all the descriptions I had read, it was a well organized marathon in a part of the country that I don't have a lot of experience visiting.

Whenever I think of Nebraska I think of boring corn fields and miles of empty plains.  Western Nebraska is anything but this as you will soon see and I was completely stunned by the natural beauty that can be found in the tiny towns of Gering and Scottsbluff -- just about an hour past Wyoming.

So without further ado, I booked a room, rented a car and made my way east on Friday morning for Saturday's race. 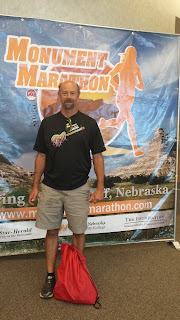 The Monument Marathon starts at 8AM and I had to be at an amphitheater no later than 7 AM to catch a bus to the race start.  The weather was forecasted for a warm run but I was somewhat hopeful when I saw that the clouds were overcast.

I had gotten up at 5 AM and ate breakfast of some Wheaties and Gatorade and a Power Bar.  I also forced down a can of beet juice.  By 6 AM I was out the door and easily found the bus loading area.  It was just the marathoners there so using the bathrooms and finding parking was easy.  This race was pretty small -- maybe a 100 runners.  Many were doing the 50 states or were Marathon Maniacs.  There were also quite a few Nebraskans there as well.

I boarded a bus and soon after 7 AM we were on our way to the Wildcat Hills State Recreation Area, which was the race's start.  The area is also the highest elevation and it was chilly and breezy up there.  In fact, everyone huddled in the back of the building to avoid the chilly southern winds.

I wound up making small talk with a Coloradan who was super friendly.  Usually when you have time to kill at races like this, it is easy to make friends. The time flew by pretty quickly and before I knew it was 8 AM and the race was to begin.

I had brought a good selection of clothes to the start.  I was going to go with shorts and a tank top but with the cold breeze I changed out with just a standard issue tech shirt.

After cycling through the bathroom a time or two and the singing of the National Anthem, the race began on time at 8AM

Almost immediately I regretted not wearing my tank top.  I could feel myself getting warmer with each mile.  By the time I reached the flat section of the course I could feel rivulets of sweat dripping down my forehead.  It was WAY too early to be this darn warm!

However, the initial miles are just stunning.  It is all downhill and there is only a few sections were it was a steep downhill.  I kept it easy and didn't go gangbusters and I wound up snapping quite a few pictures.

A little bit of a bummer was that route 71 is under construction.  We had an entire lane to ourselves but it was graded in spots and I saw one runner go down on it. 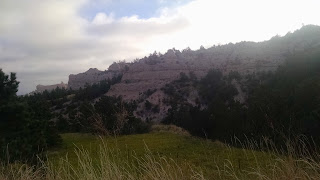 Despite running on the side of a major thorough way, I was never particularly worried about my safety.  Traffic heading into the city was pretty light and we did have a large should to run on.  There wasn't much crowd support here, but like all the volunteer stops, we had enthusiastic support...

After about 6 miles or so on the side of the road, our journey took us on a jaunt down a farm road off the beaten path.  Here there was no traffic and I had the wind in my face.  It actually felt pretty good and I was cooled off.  It was a little monotonous here and this was probably my least favorite part of the course, but it was flat and I managed to lock down a steady pace: 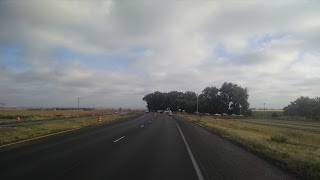 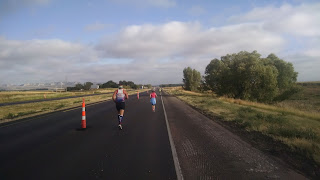 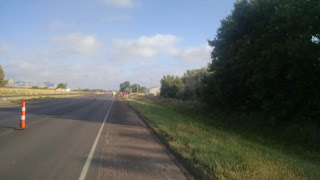 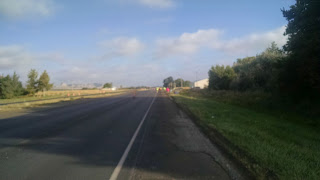 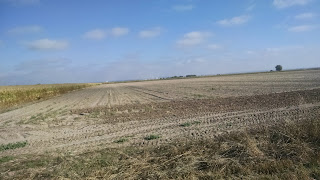 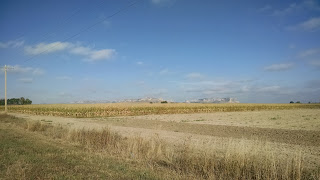 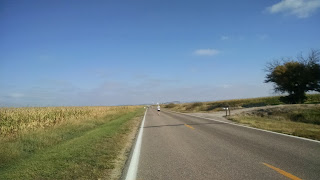 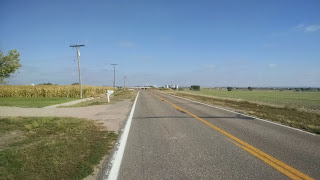 After the initial miles I was pretty much running solo the entire race.  In fact, around mile 12 there was no one in front of me and the person behind me was a tiny dot.  With only about 90 runners in the race, you do have to work with running by yourself.

Around mile 12 I ran into the finishing half marathoners.  There was a really nice crowd support here and I got a nice boost from them.  For a small town marathon, the people were really out in force for this race.

Being totally drenched in sweat and suffering, I wound up dumping my shirt.  Now I am not a Men's Health cover model by any means, but it helped keep me cool and I was willing to suck up my pride to avoid further chafing and over heating.

After passing by the half marathoners I started the lonely trek into the Scottsbluff National Monument section of the course.  Here is where the scenery and the hills would start.  Also there wasn't a lick of shade here and I was baking.  I hadn't worn any sunscreen either and I could feel my arms and head getting burned.

As I ascended into the park, I made the mental decision to dial back the pace.  My head was foggy from the heat and I knew that if I tried to maintain my sub 10 pace that I was going to wind up in very bad shape.  At this point, and I hate to admit it that I surrendered so early in the race, was to finish and I quit looking at my pace all together.

I did try to enjoy the beautiful surroundings though as I made my way through the main road through the park:


This was the toughest part of the course.  There is one serious climb here but generally speaking miles 11 - 15 are uphill.

However, upon cresting the hill, there was a very sweet downhill: 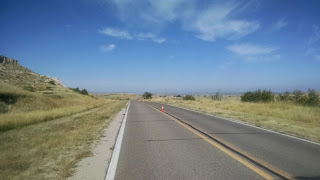 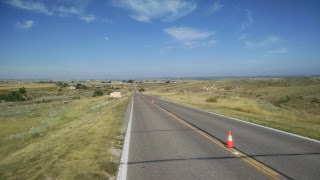 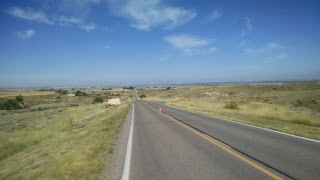 After circling around the back of the park, you are greeted with the trail portion of the race.  I thought the race was going to be entirely on road.  At first, the road was gravel that kicked up some tiny stones into my shoes, but the trail quickly turned into nice packed dirt.

Runners are treated to seeing a seldom seen part of the bluffs and I really enjoyed this section.

It was very lonely running here though.  The course support was there, but the runners were so far apart that I sometimes wondered if I was still on the right track.  Also the cyclists who were watching over the runners seemed to vanish here and it seemed all too easy for someone to get hurt or have heat issues and not be able to get help. 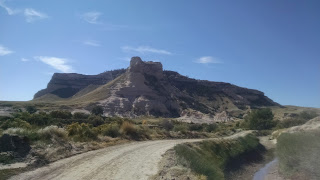 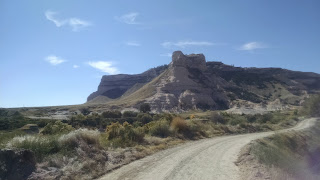 At this point I was in survival mode.  While my mile splits aren't too awful, I was truly hurting.  I was sucking down fluids at every aid station and I was greedily working at my 28 ounce flask.  I wound up draining that at least twice and managed to fill it up nearly 3 times during the race.

The final miles are on residential streets.  Crowd support once again came back and it was awesome to see so many people supporting the marathoners.  The half marathoners had long finished and at this point it was simply us stragglers.

I wound up picking up my shirt at mile 25 and started my way into the final mile:

The final mile practically killed me.  It was a general ascent and there was one nasty hill that I just walked up.  I was completely drained and the finish line couldn't come fast enough.

I wound up crossing the finish line in a disappointing 4:30 but at the same time I was happy to be able to claim Nebraska off my state's list.

After crossing the finish line, I kept moving.  There was a small finisher's village and I grabbed an ice cold Gatorade and sipped on it.  I was really worried about having another medical episode -- especially from the heat.  They had swimming pools filled with ice and I wound up applying some to my head, back of my neck and thighs.  That helped a lot and I only had a brief moment of "Oh my gosh, I am going to be sick"

I eventually grabbed some food: they had pizza, chips, Gatorade, water, and cookies.  Not a bad selection of food even for this late in the race.

To say the least, I was disappointed with my time.  I figured on a bad day I could do 4:18.  But this race really kicked my butt.  I think the heat got me and if it had been cooler I would've done better.

I also had to cut myself a bit of slack:  I did do Jackson Hole about 3 weeks ago, so I am sure that had some detrimental affect on my conditioning. 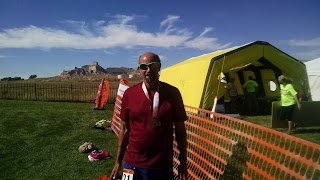 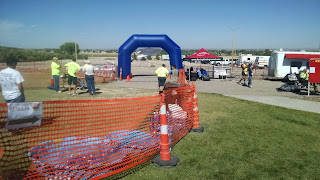 Despite my relative poor performance I thought this race was really good.  The volunteers were very helpful and they knew what they were doing.  They were stocked with fruit, gels, and even some had ice.  The course was also nicely marshaled by cyclists looking for struggling runners.  I saw a few runners that were being helped by them on account of the heat. Also on account of the warmer weather, a few extra water stops were supplied: kudos for that!

The mile markers were pretty much spot on.  I know the course has been certified and I felt, despite my Garmin's measurement of 26.4 miles, that the course was accurate.

I loved the plaque that I received at the expo.  I'll definitely hang that up somewhere.  The swag bag was a monster too: tons of coupons, goodies and gadgets.  I am still sorting through it.  Other races could take note.

The t-shirt is well designed but it is a high quality cotton one.  I only wear tech shirts for races so it isn't something I am likely to wear except to the office or on super easy runs.  It is a quality shirt though and not a cheapo one.

I liked the finisher's medal too.  It is in the shape of Nebraska and it is something I'll definitely be happy to display.

I would love to see the folks start this race earlier.  8 AM is way too late, especially given the weather conditions.  I was really hoping for a 7 AM start time.

I definitely enjoyed myself and am glad I ran this race.  While the first half the course isn't terribly exciting, the second half is stunning.  Nebraska isn't just cornfields and endless plains and the Monument Marathon clearly showcases it.
Posted by Eddie Gaul at 10:03 PM