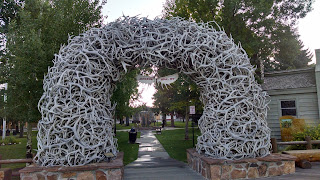 Early this spring, my boss and I decided to plan a trip to Jackson Hole Wyoming.  The trip was going to coincide with Labor Day, since it was a three-day weekend.

I happened to look at the race calendar and discovered that the Jackson Hole Marathon was happening.  My boss was going to run the half and I'd knock out Wyoming Marathon #2 if my training was going well.

Sadly, my boss's inaugural didn't come to fruition as he got injured but my training had been solid.

We left work on Friday and the goal was to get to Jackson by the 9:30 cutoff time for picking the bib.  Sadly, I-15 was slow going until we were nearly to the Idaho border.  Labor Day + Friday rush hour traffic made it difficult to get rolling.

We were going to stop and eat in Soda Springs, ID, but quickly realized that that wasn't going to happen.  We cruised through the back roads of Idaho and took the shortest route to Jackson Hole and got to the packet pickup with about 10 minutes to spare.

It was a super quick in and out and there was little fanfare.  I double checked all my logistics for the next day before heading on out.

We were staying at the Virginian Lodge Motel which was about a mile away.  I arranged with my boss to drive me to the start line at 6:30 (for the 7:00 am start time) and he'd pick me up about 4 hours later at the finish line.

Since we hadn't eaten, we made a quick run into Subway and I hit the hay soon afterwards.  I actually slept pretty well -- despite having pre-marathon jitters.  But I knew where the race started and the race was extremely low-key for me.

At 5AM my alarm jolted me awake.  First thing on my mind was the weather.  I opened my motel door and was greeted with the site of pouring rain -- lots of it. Ugh... at least it wasn't terribly cold.

I wound up eating a Power Bar followed by Wheaties and sports drink.  I gathered all my wet running clothes and packed up a post-race clothes bag and headed out the door.

I had about 25 minutes to kill at the race and luckily they had the Chamber of Commerce building open for the roughly 150 runners.  It was warm and dry and had a clean bathroom.  There were plenty of 50-staters and Marathon Maniacs there and I made small talk with lots of people from all over the country.  It seemed like there were very few locals...

I wound up going with a wind breaker, a pocketed garbage bag poncho, a heavy tech shirt (short-sleeved) and shorts.  I also was carrying a 28 ounce bottle filled with Powerade and 4 Gu gels. This race was a cupless race, so you definitely have to carry something.

The race started at about 7AM as it was drizzling. 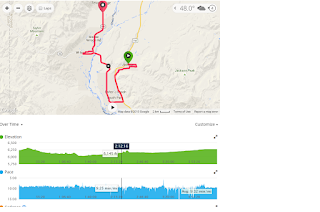 The Jackson Hole Marathon has a largely uphill course profile.  Although other than the start and a mile long hill at mile 15, the course is deceptively flat.  There is also some downhill but there isn't massive stretches of it.

The first couple of miles, it rained.  Not a hard rain but actually a pleasant drizzle.  The rain did eventually stop and by mile 5 or so, I was getting a little warm.  I had read that the rain would pass by 7AM-ish, so I wound up taking it off and dumping it the weeds and making a mental note where it was later so I could get it.


The first mile or so is held within the town but after making a quick jaunt down the main boulevard the runners hit the residential section. After a mile I was completely disorientated but luckily the course was well marked and at this point there were plenty of runners to work with.

After a few miles you jump onto a beautiful bike trail.  I was running along a creek and the greenery and being surrounded by the hills of Jackson made it such a peaceful run.  Couple this with a light rain and I thought I had a PR worthy day.

Unfortunately, at 6200 feet (or so) I found my breathing somewhat labored.  I probably should've dialed back the pace but I figured with the rain I would sort of go with the flow.

After running on the bike trail for nearly 14 miles, you jump out onto a pretty busy road.  You have a wide shoulder but there are definitely cars going by.  This was probably the least favorite part of the course and other than crossing over a long bridge over the Snake River, the tranquil element was gone.

You also had to cross this busy highway -- which was filled with cars heading up to the Teton National Park.  Again you had a wide shoulder and the crossing guards at the cross over point handled the traffic well.  As a matter of fact, all road crossings were handled very well.

After running through another subdivision, you entered onto another bike trail that made the slow ascent into Teton Village.  At this point it was raining hard, and at one point it was hailing.  I actually enjoyed running the rain, but I just felt tired and my breathing was labored.  My legs were pretty good, but I really suspect the elevation was gnawing at my endurance.

The last few miles were finally in sunshine.  I actually felt like I was running faster at this point, but my Garmin times indicate otherwise.  I think park of me was frustrated that the course was long and the other part of me realized that the altitude had kicked my butt.  However, I didn't really feel like I was doing the death march, where my pace goes beyond 11 miles.  And I felt like I could hold the 10:30 pace for a quite a bit longer -- so maybe there is a 50K in my future.

I wound up crossing the finish line in 4:15:11.  Definitely NOT what I was hoping for.  I think I saw on my Garmin that I had ran 26.2 in about 4:07 or so, which is actually on par of what I think I could run given the course's nature.  I checked with other people and people's times were slower and I had Garmin measurements of 26.4 and beyond.

Also, around the half way point, I suspected the course was also going to be long.  The first few miles the mile markers were off slightly from my Garmin, which is to be expected.  At first it was .01 of a mile (normal) and by the half way point it was a good .15 miles difference (not really normal).  The course is easy to run the tangents so I was very confused about what I was seeing on my Garmin.  The longer the race, the more I realized I was going to be running a 26.5+ mile race.

I was sort of bummed that I didn't have my phone with me for course pictures.  Given the rain, I didn't want to risk getting  it wet.  But suffice to say, the course was stunning and other than the stretch along the highway, I found myself really at peace with the surroundings.  I was never crammed by runners and there were stretches of time were I was running solo.

The course was well marked and there was only one spot where they could've used a course marking to assure me I was going the right way.

Course support was incredibly good.  There were self-service water / Powerade stops every 2 miles (or so).  I was able to fill my canteen in seconds flat and they were passing out Cliff Shots.  Some also had candy and one of the final stops had salt tablets, which I really think helped me.  They could've used more bathrooms at the start but I never had to wait while on course.

My boss did get a lot of pictures and video of me crossing the finish line, so stayed tuned for that.  My boss also came with two Mexican Cokes for me (in bottles no less) which tasted like heaven.  It settled my stomach and I had no dizziness issues.

Post race festivities consisted of locally brewed beer, soda, sports drink and bananas.  I was a little disappointed with the post race atmosphere and offerings.  I am not a beer drinker and there just didn't seem to be any premiums.  It was sort of "here's your medal, grab some food, and take off".  The finish line was devoid of any sort of energy.  Even all the half marathoners were gone.

After making sure I was okay, I hobbled off and wound up paying $5 at a local hostel for a shower -- best $5 I've spent in a long time.  Since I had a change of clothes ready, I was ready to face the day in short order -- and since we were right on the border of the national park that we wanted to visit, that meant we didn't have to make a twenty minute drive back into town and come back.

The medal is very cool and represents the elk horns the city collects: 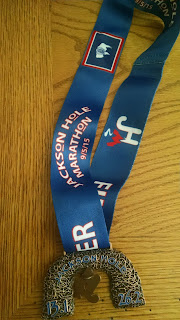 The t-shirt is actually pretty nice and is a long-sleeved shirt.  They had some coupons for local restaurants as well in the swag bag. 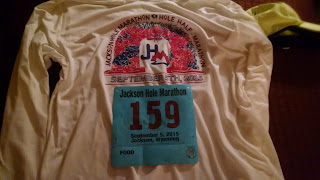 I paid $100 for the race, which isn't too bad considering I signed up a few days before the event.  Motels aren't cheap there (about $130 a night) so all things considered this was an expensive marathon.  However, I got to really experience Wyoming and one of the most beautiful places on earth.  I actually found the weather enjoyable and would recommend this race to those wanting to run a race in Wyoming.