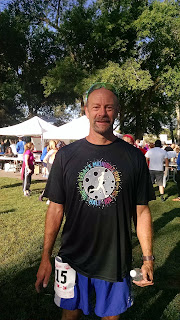 Well truth be told, I was really thinking about going out to Wells Nevada this weekend to run the Race to the Angel Half Marathon.  I had done the race back in 2013 and I've been wanting to make a return visit since.  Having just done the Jackson Hole Marathon last weekend I was sort of persuaded to stick close to home this weekend -- hence no destination race. /cry

So this weekend I decided to run The Classic Race in Layton.  This race featured a 3K, 5K and a 10K.  Since Layton is about a 30 minute drive north I figured I'd make it worth my while and do the 10K.  Never hurts to get a few extra race miles in. 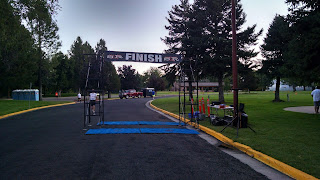 I rolled into Layton with about 45 minutes to spare.  I easily found the race as it was at The Layton Commons City Park.  I hadn't been to this part of Layton before and I really didn't know much about the area.  Packet pickup was easy and I had my shirt and swag bag in a few minutes.  Since I had registered at noon the day before they didn't have me on any sort of list and I was expecting confusion, but instead they were like, here's your bib, have a nice day...  very cool.

I had assumed this race might be a low key / lightly attended one.  There is a huge half marathon / full marathon fairly close to my house (but with a massive downhill -- which I am not a fan of) so I figured that race would've taken all the local runners.  Definitely not the case today.

I looked around at the starting line and saw a fairly decent and fast crowd.  I recognized a lot of the runners from the Winter Striders Circuit and I knew that a bunch of them were pretty fast.

The race started around 8am and I took off trying to maintain about a 7:45 pace.  I had no knowledge of what the course was like other than the website said it was challenging.  Being that I don't really know Layton all that well I figured I'd go somewhat hard and see how long I could hang with it.  Probably not the best strategy... but hey, give it your all or stay at home.

The first mile is somewhat down hill and I felt pretty good.  When my watch beeped at mile 1 and showed a 7:30, I felt like oops... a little too fast.  Then I looked ahead and saw a gradual rise.  No massive hills here, but definitely a climb.

Mile 3 was the worst though and at this point I was just tired.  Despite running a marathon last weekend my legs were in pretty good shape but I was definitely sucking wind at this point.

I figured though that once we turned around that we'd (hopefully) get a downhill section.  Sure enough, just after the halfway point we got a gentle downhill and at that point I let it fly again.  Despite being somewhat gassed, I got a second wind and was really cooking here.

By the time I got to about 5.5 miles though I was praying for the end.  I had joined up with a lot of the slower 5K runners who had started about 15 minutes after us and it felt good to pass them.  For most of the race I was running with someone and having the 5K runners to work off of provided some motivation.

The last half mile was a grind.  You basically had to run up the service entrance to the park (the same one we left by) except now we had a slow incline. 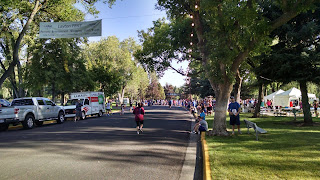 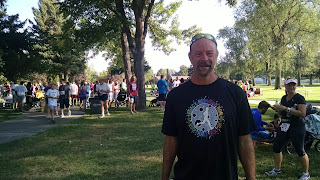 
I crossed the line in 51:13, which marks about one of the slowest (if not thee slowest) 10K I've done.  The course did include nearly 300 feet of elevation gain so in my opinion it was a tough course.  I was really hoping to cross the finish in under 50 (my times thus far this year have been in the low 49's).  My Garmin indicated that I had run 6.31 miles, but my understanding is the course was certified.  Hard to tell who is right here.

I still had lots in the tank though despite hurting a bit near the end.  I suspect the high mileage and last week's marathon killed some of my speed -- it's been a while since I've run a 7:30 mile in any way, shape, or form.

Course support was good.  They had three water stops and all but one intersection was manned by the police.  The course was primarily residential streets with a small stretch on a bike trail.  It was easy to figure out where to go.  I wound up paying nearly $50 for the race, so it was definitely on the higher end for me but also consider the fact that I did signup less than 24 hours before the start of the race.  The t-shirt is also a nice long-sleeved one: 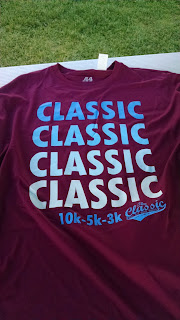 I grabbed a water and made small talk with some of the elite athletes there - one of whom you've might have seen in Running Times Magazine as a star master's runner.  I believe the winning time was 31:30... blistering fast.

Unfortunately, I finished fourth in my age group.... So no hardware today.

Afterwards, I decided to hit the Layton Golden Corral, where I haven't been to in a while.  Thank goodness the workers there still recognize me.  I managed to drown my sorrows with cheap carbs... 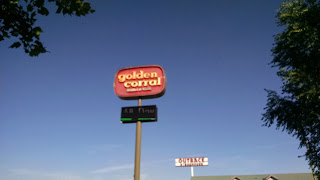 Once again, I am glad I did this race and I like getting in a bit of speed work.  It has definitely been a while since I've run any fast miles and this race may be what I need to start dialing in less junk miles and more quality ones...