Saturday was going to be a busy day.  I've itemized everything I did below:

After the ovens, we headed back to the hotel.  To say the least, I needed a break!

We arrived back at the hotel just after 5 and I wasn't quite ready to hit dinner.  Itching to take advantage of the pool, I quickly changed into my bathing suit and hit the whirlpool.  It really helped me recover and I wound up meeting a guy from Casper.  We exchanged stories about Wyoming and I explained I had run the Casper Marathon.  Pretty cool to get travel tips from him, should I opt to run that one again.

After cleaning up we headed to the downtown area, which was about a 2 mile drive from the hotel.  Easy parking too -- I just pulled right up to the outside of the Jailhouse Motel and Casino on the main road and I was in the heart of the downtown area.

I had gotten some dining tips from people at the race and we did a bit of exploring before settling in on one:

1) Jailhouse Motel had a nice restaurant and the people at the race said that was reputed to be the best
2) A restaurant at the Ramada
3) The lady working the spa at Montego Bay told me that Hotel Nevada's cafe had good food.

We sauntered into the jailhouse and looked over the menu.  It was a bit on the pricey side and the theme of the restaurant was that you were served in cells -- probably from the original jailhouse.  I saw something that struck my fancy but I wanted to check out the Hotel Nevada.

We walked across the street and the Hotel Nevada's cafe was bustling and the food was affordable.  I saw something on the menu I wanted more (I had a major hankering for fries) and so we jumped into the cafe.  I ordered the salmon dinner and Shari ordered a pizza. 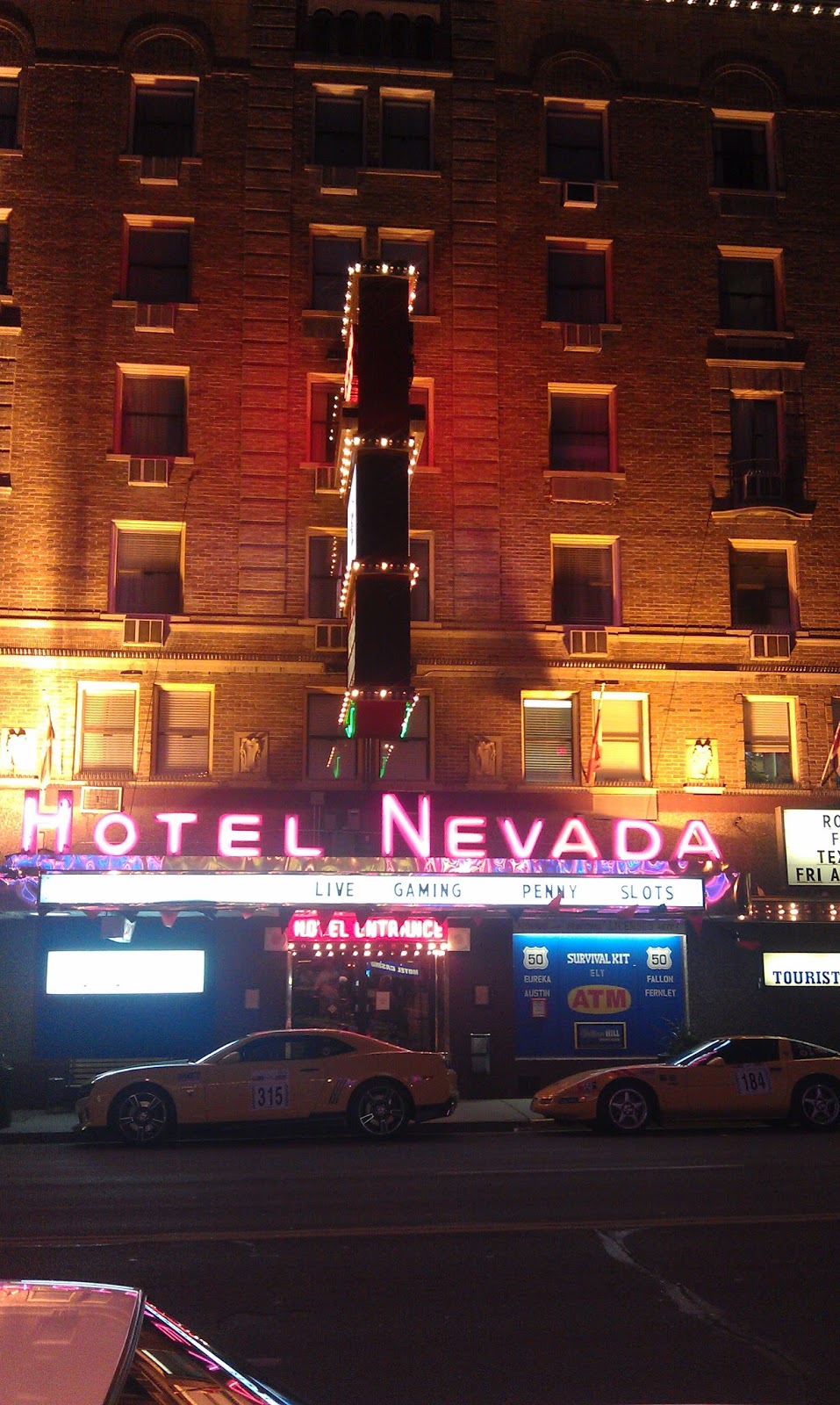 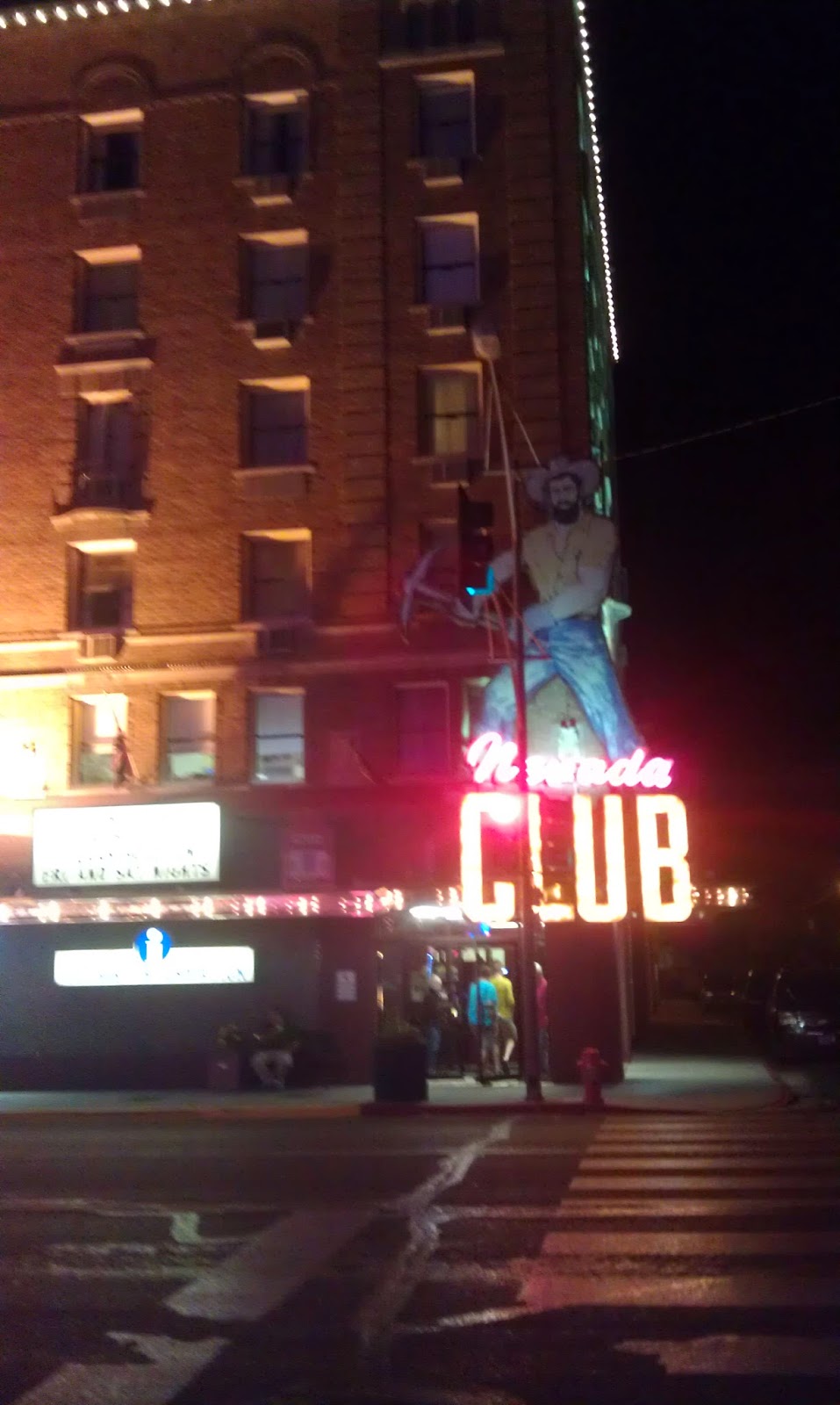 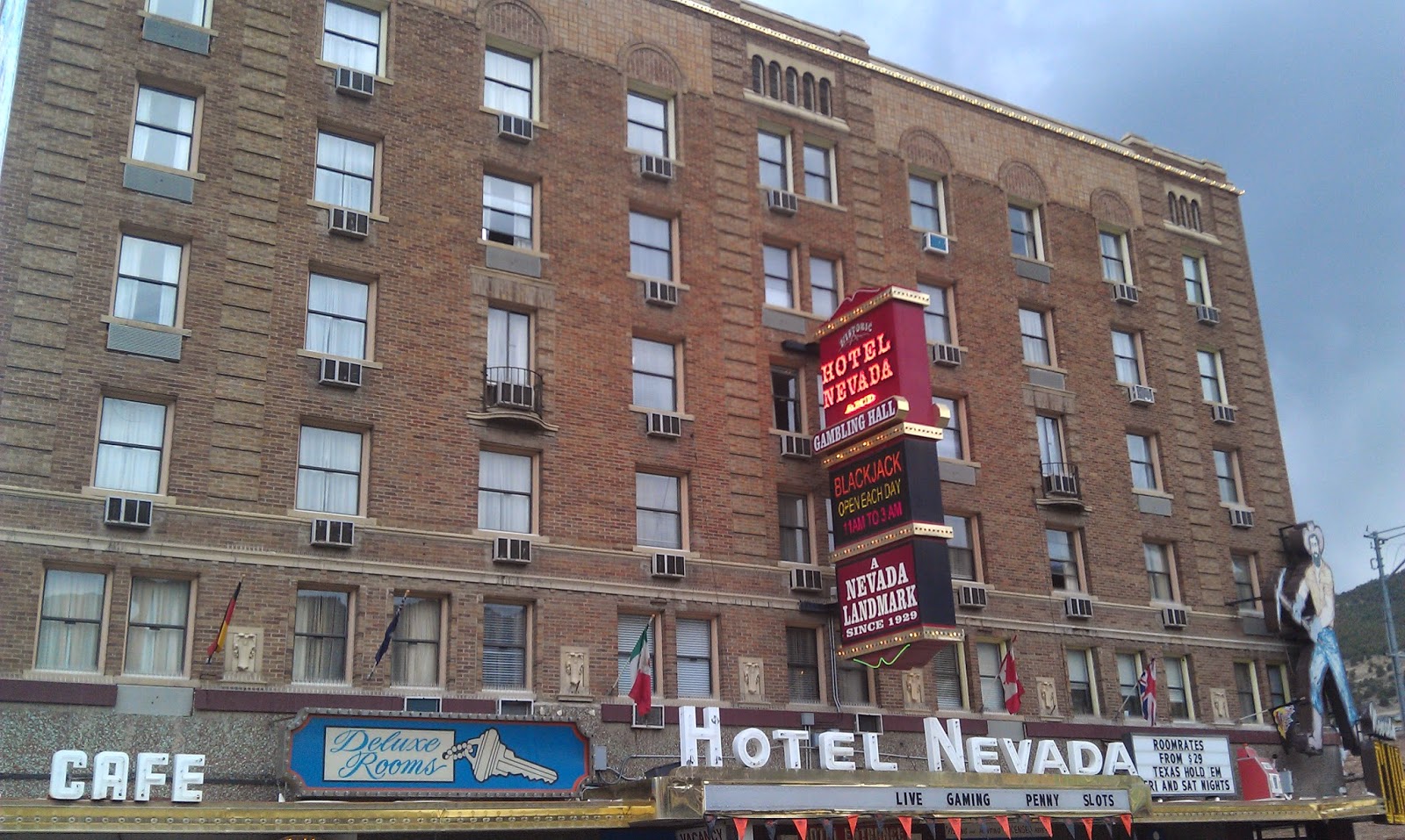 The food was good and I really appreciated the large portions.  This was also my first meal of the day (more or less) so I was ravenous.  I wound up eating most of Shari's pizza.  The pizza won't win any awards any time soon, but it was good.

After eating, we decided to gamble.  I found an Invaders from Planet Moolah, one of my all-time favorites.  I plunked a $20 in, and got a really nice bonus round netting a profit.  I spied a Fu Dao Le and dropped another $20 in there and quickly turned another profit.  I was on a roll!  I even won at Multi-Strike video poker.  The casino was the only one in town with live gaming (including pot limit Texas Hold'em) and their selection of slot machines ranged from older to new.  I was really impressed with their selection and it wasn't terribly busy either.

We also checked out a lot of the memorabilia on the walls.  The Hotel Nevada dates back to 1929 and was once the tallest building in Nevada.  There are pictures of famous people who have stayed there on the walls throughout the hotel as well as western artifacts on display: 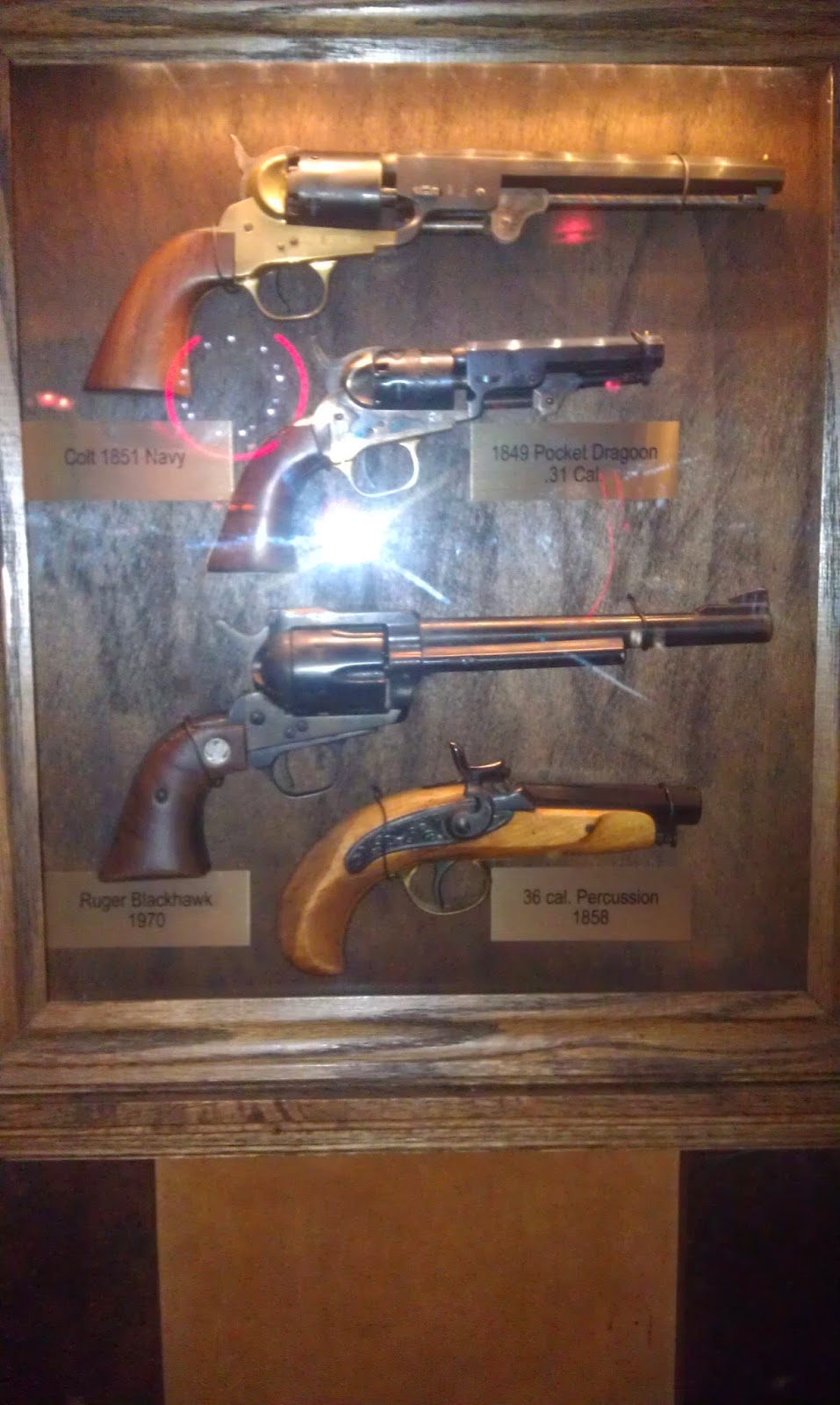 After stuffing my wallet with my newly made dollars we headed on over to the Jailhouse.  I want to say this motel had a good selection of machines, but they were mostly older ones.  I found a Mr Cashman and plopped a $20 in there.  I thought I was finally going to get skunked when I hit a jackpot and won $40.

I headed back on over to the Hotel Nevada but my luck had gone south and I wound up losing about $20.

Shari wanted to check out the final casino in town, the Ramada, so we went over there.  I wound up gambling there for about 30 minutes.  I think I left with a $4 profit (literally).  It was a tiny casino though and they didn't have any of my favorite machines.  One of the weird things was that the hotel's pool was located just below the slot machines.  So while you were playing, you could watch the kids screaming and swimming. 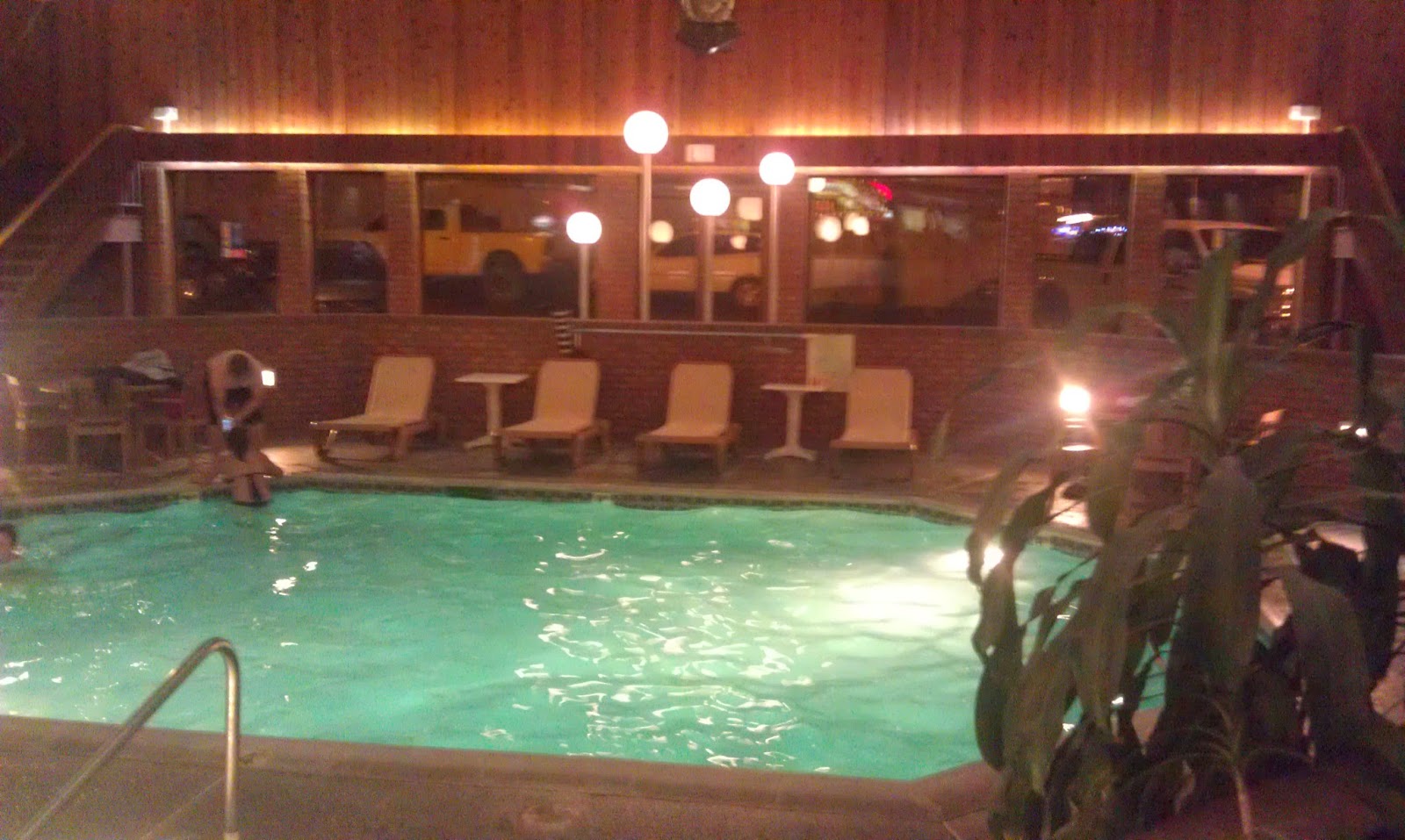 At that point, I could hardly see straight on account I was exhausted, so we drove back to the hotel.  I spotted this car in the parking lot: 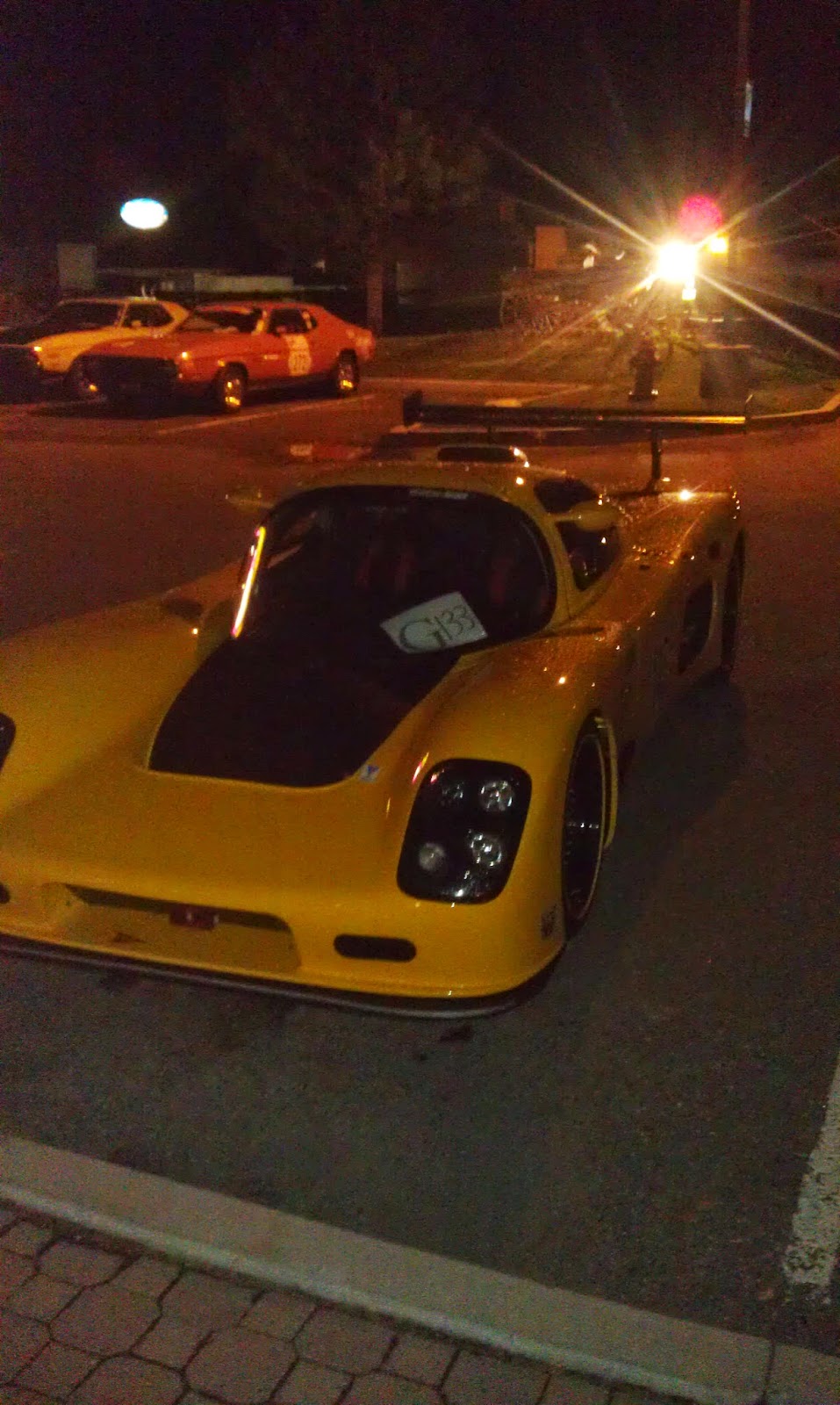 I wound up meeting the guy who owned it in the morning.  Turns out he was a CSULB graduate (like myself -- although he graduated about 15 years prior to me).  That little gem runs about $150K and he was planning on racing it in the desert race in the morning -- at a speed of over 200 mph.  In fact, the entire town was littered with muscle cars, Porsche's, Corvette's and race cars.  Just outside of town, a highway gets shut down for a race where contestants get nearly a 100 mile stretch of open road to race on. Sort of like a Cannon Ball run, but all legal.

I hit the sheets just after 10pm.  I wound up sleeping extremely well and woke up really refreshed on Sunday morning.  You know you've lived to the max when that happens.