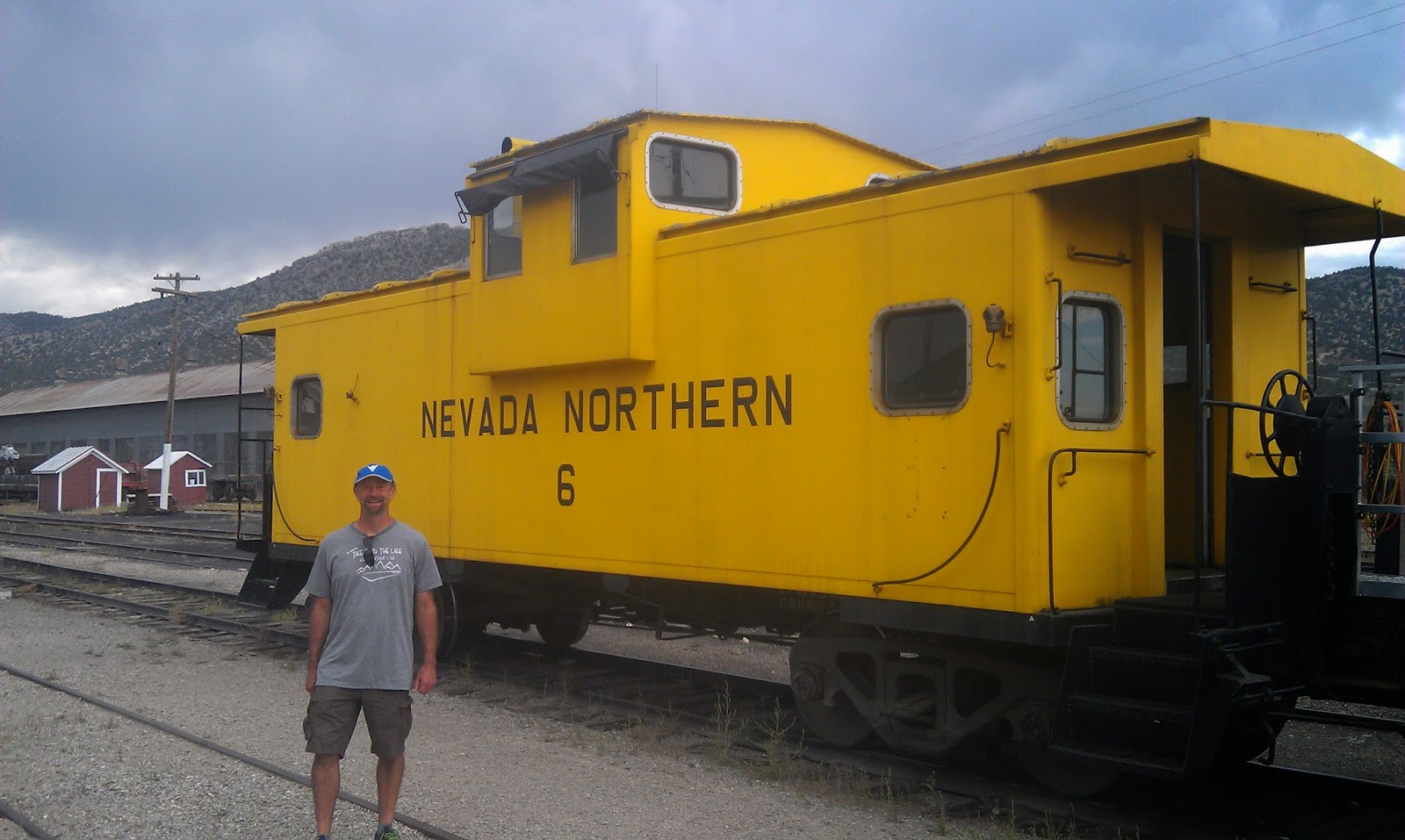 After finishing my Take it to the Lake Half Marathon I began to ask a bunch of locals what I should do with the limited amount of time I had remaining.

Most people said I should visit the Great Basin National Park, but given that the morning was mostly over (and the fact that I wasn't in the mood to take a 60 mile drive) I opted for what most tourists do; visit the Nevada Northern Railway - The Ghost Train of Old Ely.

Suffice to say, that I took about the quickest post half marathon shower in the history of mankind.  I got in touch with Shari who was eating in the hotel restaurant.  They had large portions at the cafe and she willingly handed me most of her meal, which I wolfed down in record speed.  I also sucked down a pair of Cokes before paying the bill. 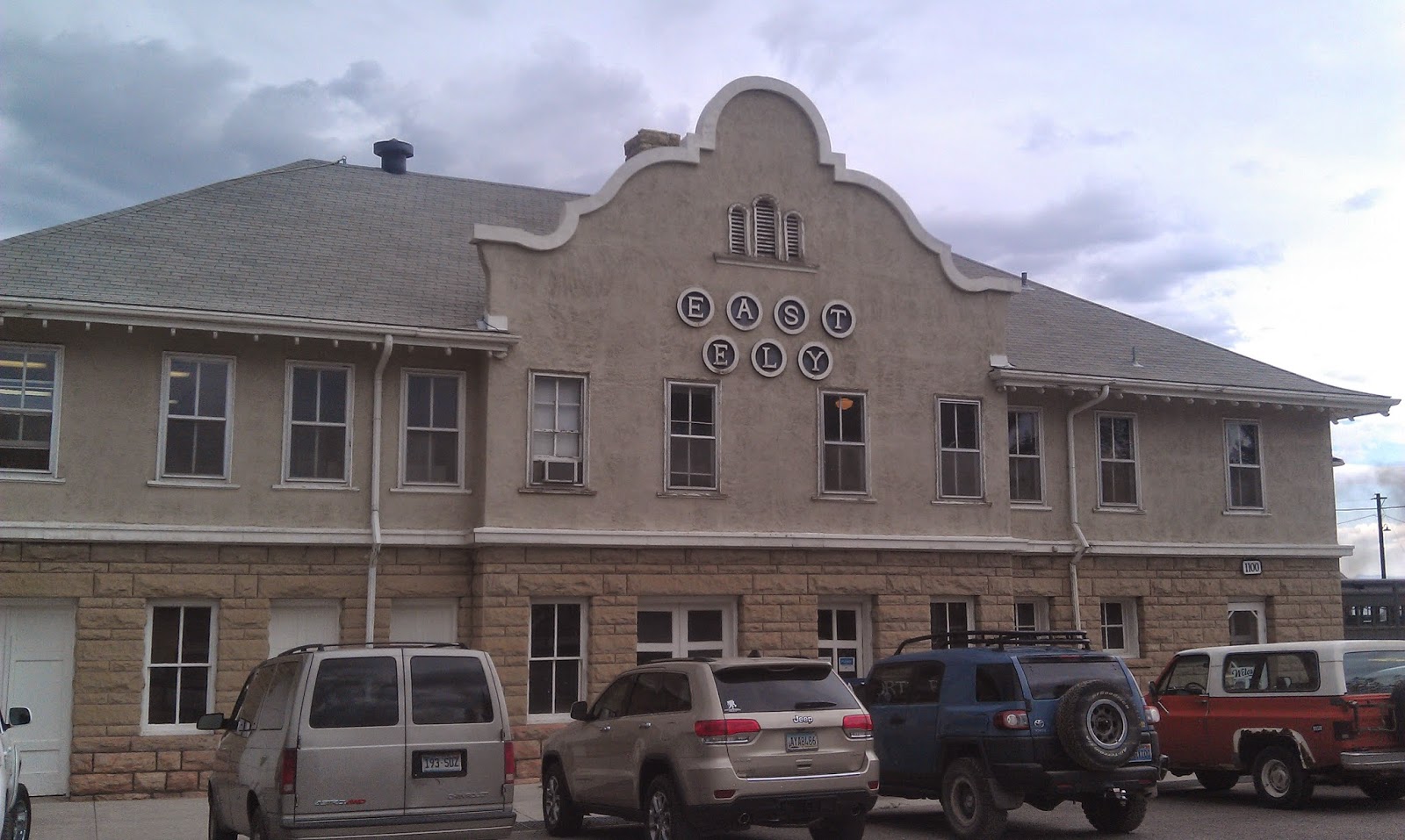 Getting to the train station was no problem and for $27 a ticket, Shari and I got to ride on a steam engine.  The train started out at the historic train depot before heading west towards the mining sections of town.  We basically got a bird's eye view of the city as the rail system was elevated over the city.  So we were literally looking into people's backyards as well as some charming scenery of the mountain side.

We had the choice of sitting in the interior cars but we opted for the roofless and windowless flat bed car.  While we had uninhibited views of everything it did have a down side:  there was a fair amount of soot and smoke that came down from the coal fired engine.  Before long, my legs had speckles of coal dust on them.  So don't wear your good clothes and sit outside.  Also when we went through a pair of tunnels which became filled with thick smoke.  Luckily it was short lived and we were fortunate to have very good weather and a good breeze to keep the air relatively easy to breathe:

After a while we got out of town and our route hugged the "Loneliest Highway" -- otherwise known as Highway 50.  A lot of people who were traveling along route 50 stopped to take pictures of this historical train chugging along the side of the freeway.  There were lots of hand waves and good will.
Our speed was no more than 30 miles per hour.  Often times it was a lot slower.  One of the treats was going through 2 short tunnels, one of which was built nearly a hundred years ago.  The engineer certainly loved to toot his horn as well -- the employees who were on board must be having the time of their lives. 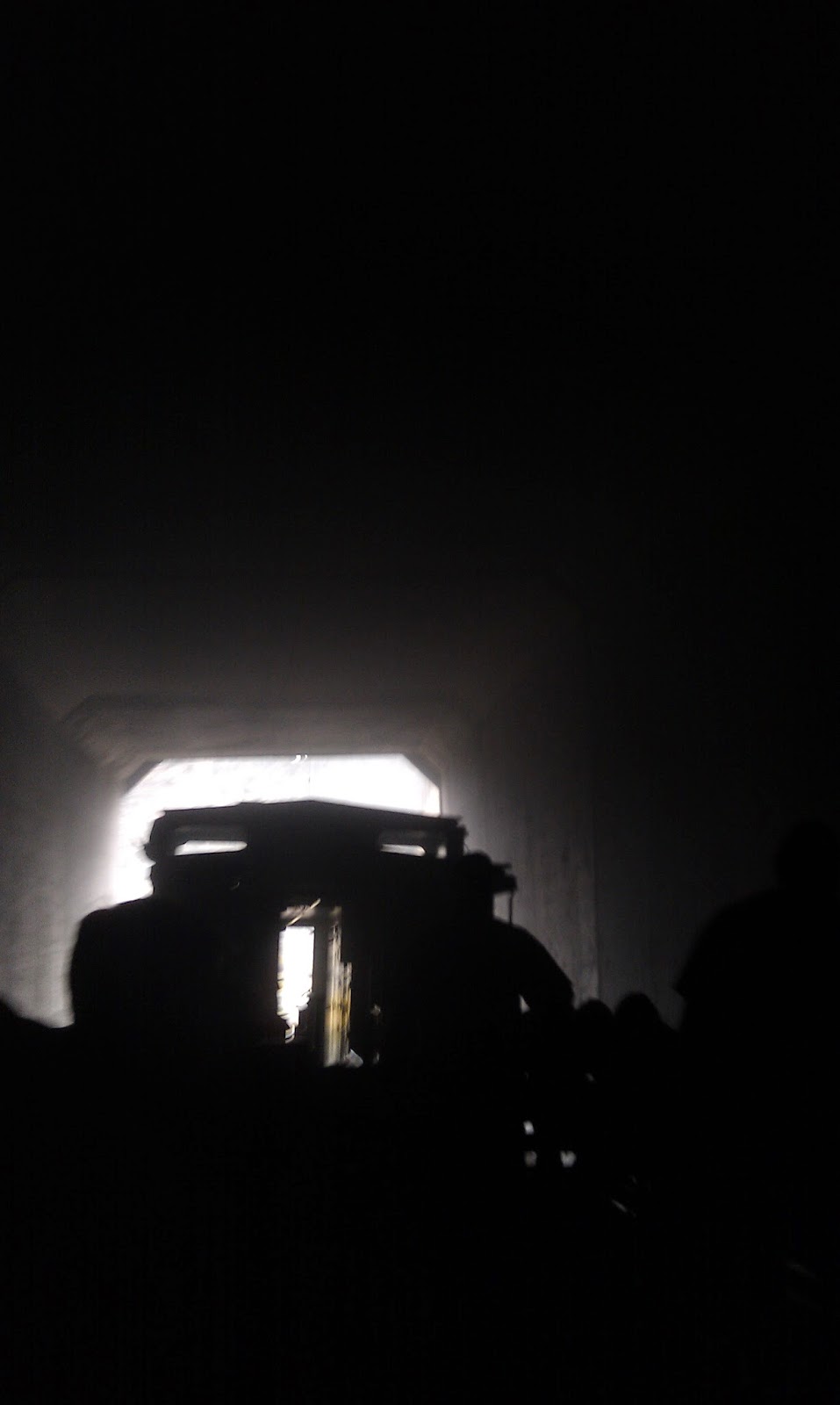 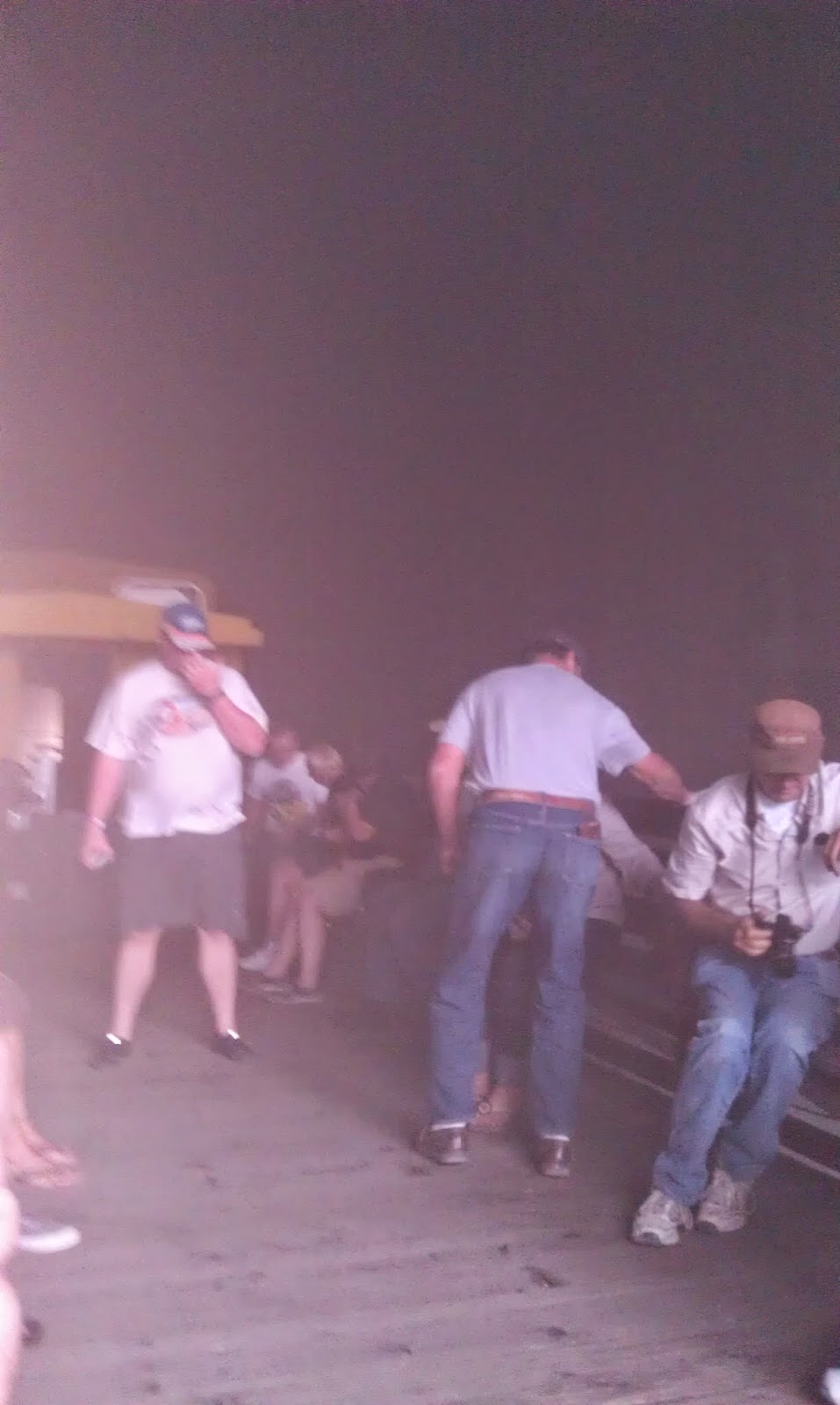 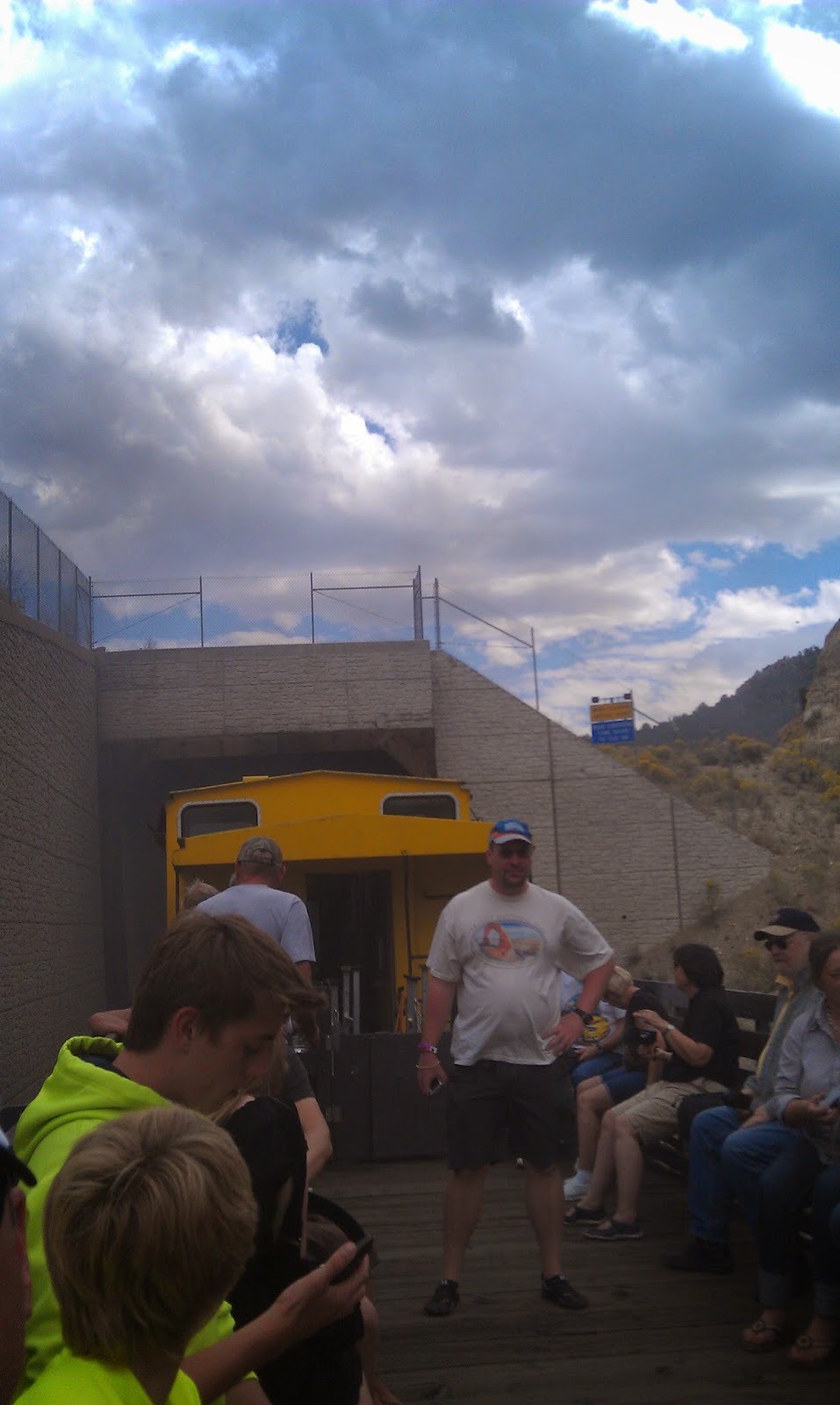 As we made our way westward, the narrator would give us the low down of the history.  We passed by several abandoned mines:

We then passed by Lane City Nevada -- which is now a ghost town.  All that remains are some dilapidated structures that was once a bustling little hamlet:

We also passed by a structure that apparently was used by newlyweds.  If the couple couldn't afford to purchase a house in Ely, this one was provided for them until they could afford one.  It was quite a stretch from town but apparently it was called the "Honeymoon House".

After about a 50 minute train ride, we came to a spot where they have a gimmicky old ghost town that was made up called Keystone Gulch.  It was mildly entertaining and I think it was meant to entertain us while they switched the tracks so that we could head back to Ely.  Overall, the entire trip was about 100 minutes and it was thoroughly entertaining.  The tour narrator knew his facts and kept everyone appraised of where we were at and the historical significance.


The train ride back was more subdued and I managed to get some more photos of the rail yard and mining operations: 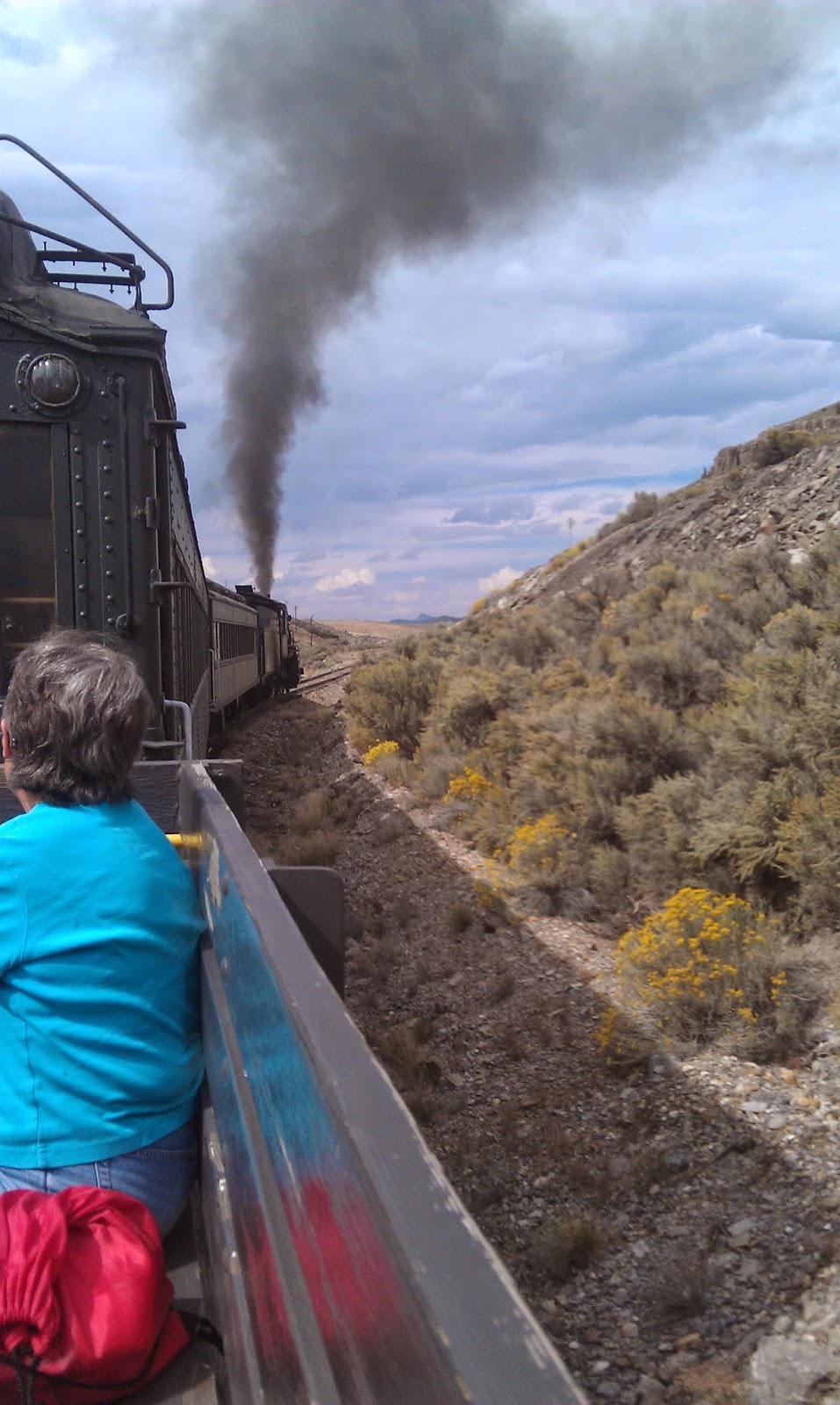 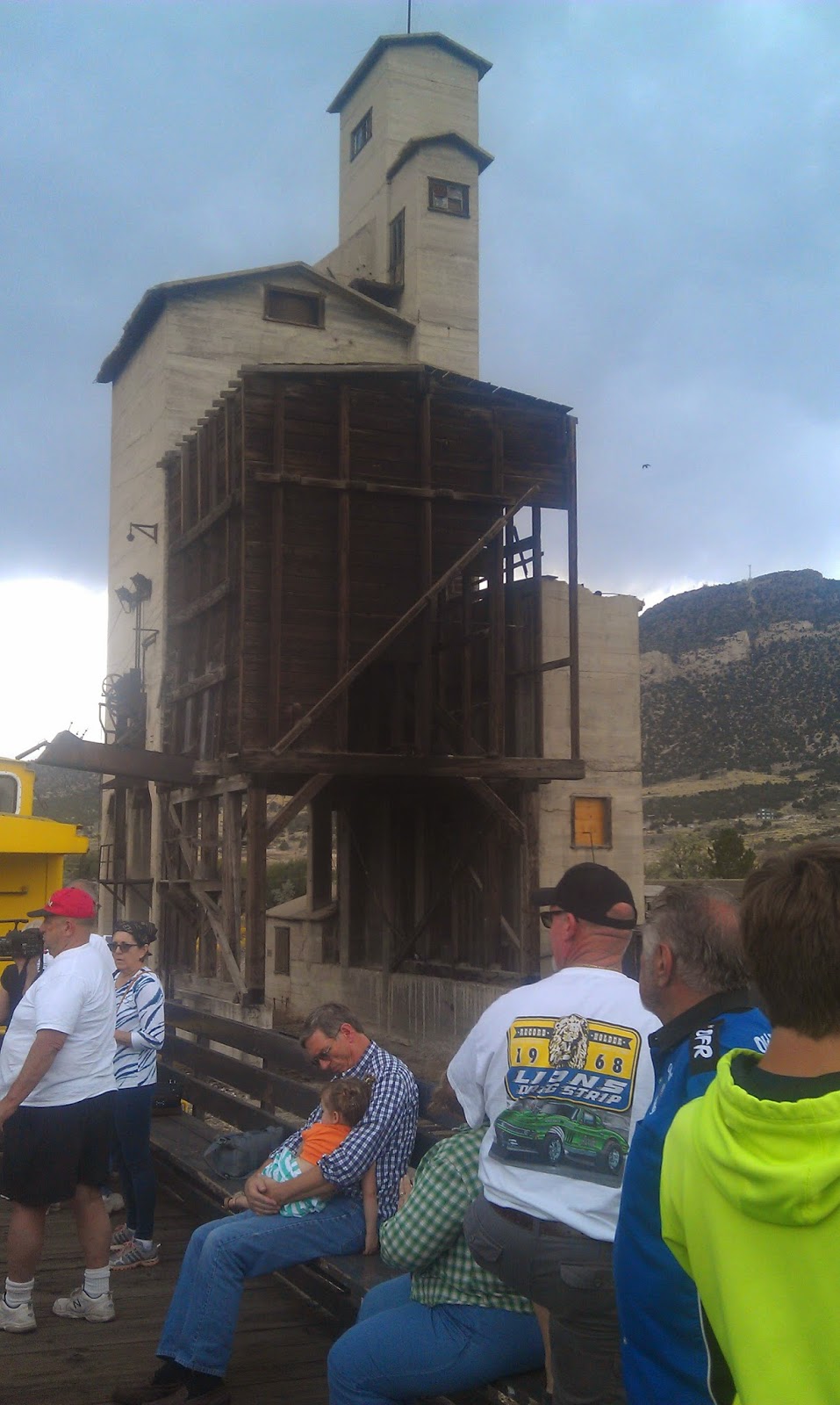 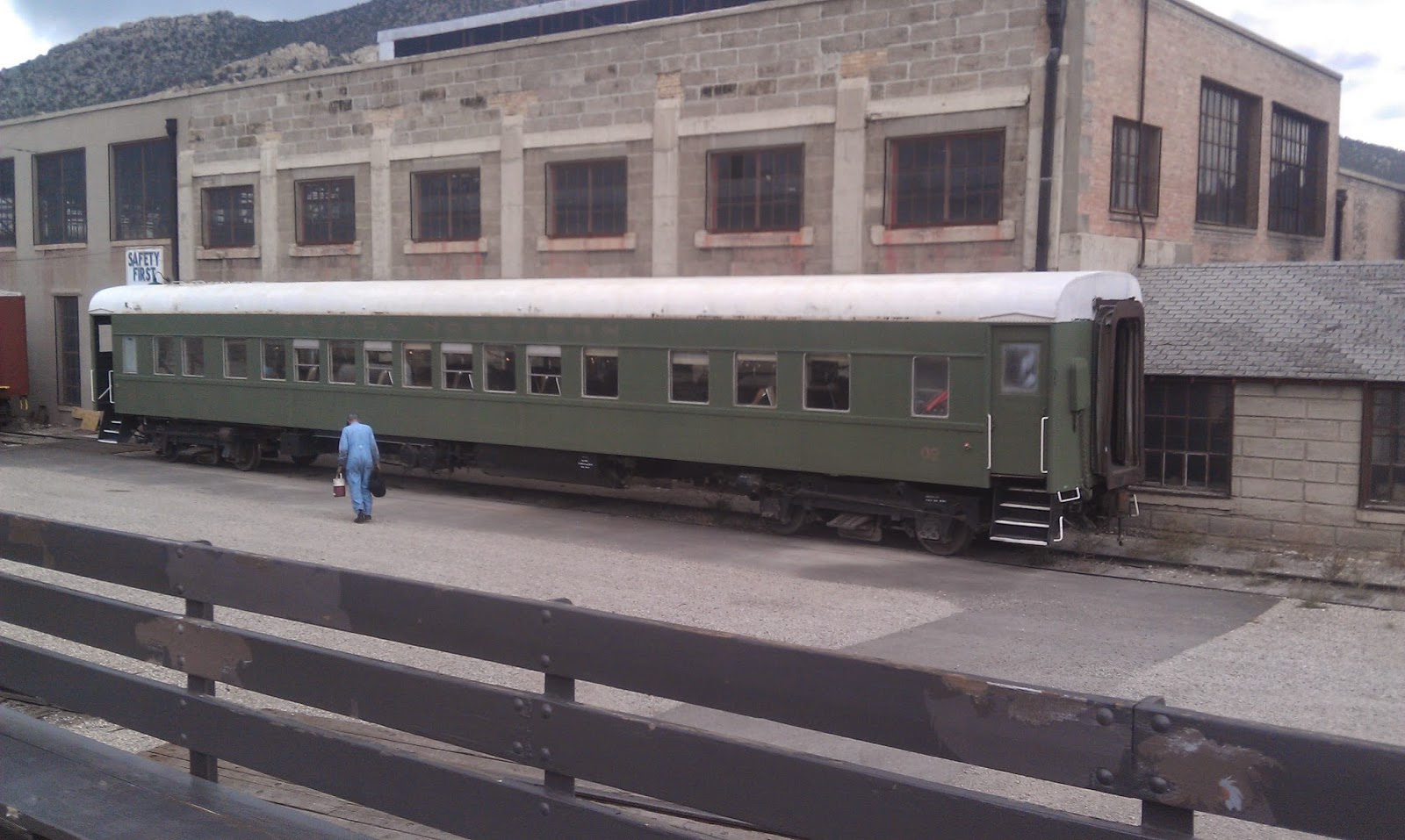 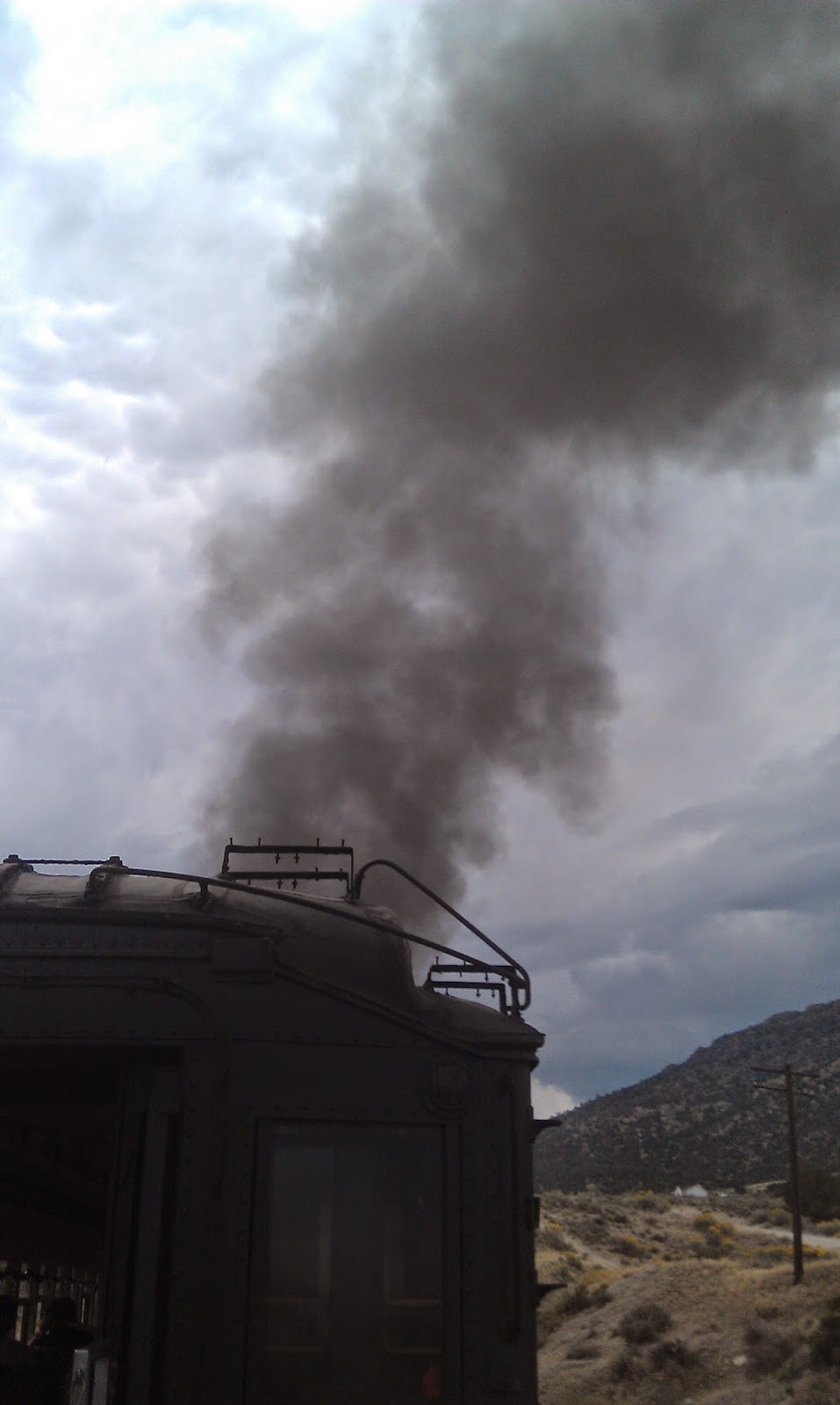 The train ride was on the expensive side -- $27 a person, but given the amount of entertainment we received I thought it was a fair deal.  It was a beautiful day out and I got a better idea of Ely's history and importance in railroad history.  The benches weren't terribly comfortable on the flat bed but overall I found the trip relaxing and informative.

We did have the opportunity to visit the museum, but we opted not to on account that it was threatening rain and we wanted to take another quick visit to another Ely hotspot, the Ward Charcoal Ovens, so we headed back to the hotel for a snack, water and a change of shoes...