Ely Nevada - Take it to the Lake Half Marathon 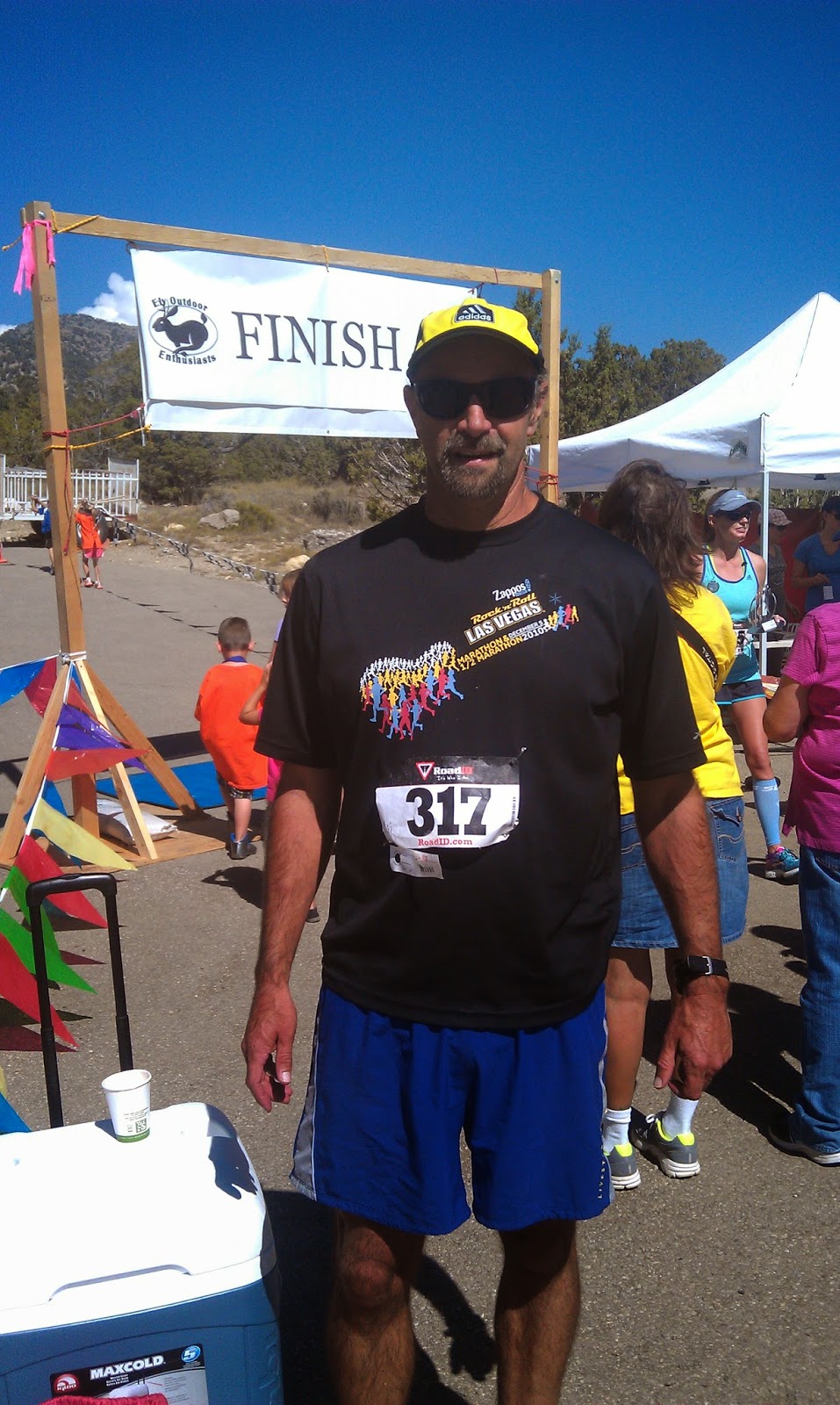 Well, it was time to do another Nevada race this fall.  I had thought I'd the Race to the Angel again in Wells Nevada, but opted instead to journey to Ely Nevada for their half marathon, entitled Take it to the Lake.

Take it to the Lake, is a half marathon / 10K race that starts at about 7300 feet of elevation at Cave Lake State Park.  Cave Lake Park is located about 15 miles south of Ely.

I got up at about 6AM and ate a breakfast of Life cereal (by the handful no less) and an iced tea.  I had slept really poorly that night.  I think the stress of driving through the pitch black desert (with little cell reception) had set my nerves on edge.  Also it didn't help that the room felt too warm and every time I cranked up the AC I got my hand slapped by Shari.

At about 6:40 I jumped in the car and made the trip to the park entrance.  There was no traffic in Ely at that time of day and it was super easy to find it.

They had the road pretty much blocked off to get into the park and I had to wait about 15 minutes for an escort truck to take me and about 10 other cars to the top.  They had closed down one lane of the highway for the race.  While I appreciate the safety concerns, I had my doubts it was really necessary (except in certain spots).  The race is pretty small and other than some blind curves the race probably could've been handled without this.  However, for about 2- 3 hours no one could leave the park or enter it without the escort car.  Luckily it was only about a 15 minute drive to the top (about 7 miles from the highway).

I got to the race at about 7:30 (for an 8AM start).  The race is pretty small.  I'd say there were about 50 - 60 walkers for the half marathon, 10K and half marathon runners combined.  Usually small races are a bit lax on start times, but this race started at 8AM on the button.  Just about every aspect of this race was done with perfect.  Kudos to the people who put on this race!

I also got my t-shirt and a large bag full of swag.  I'll be honest, I've paid twice as much for races and gotten a fraction of what I got here.  While the shirt isn't my favorite (it doesn't have Nevada or Ely on it) and it is cotton, the rest of the event was just great. 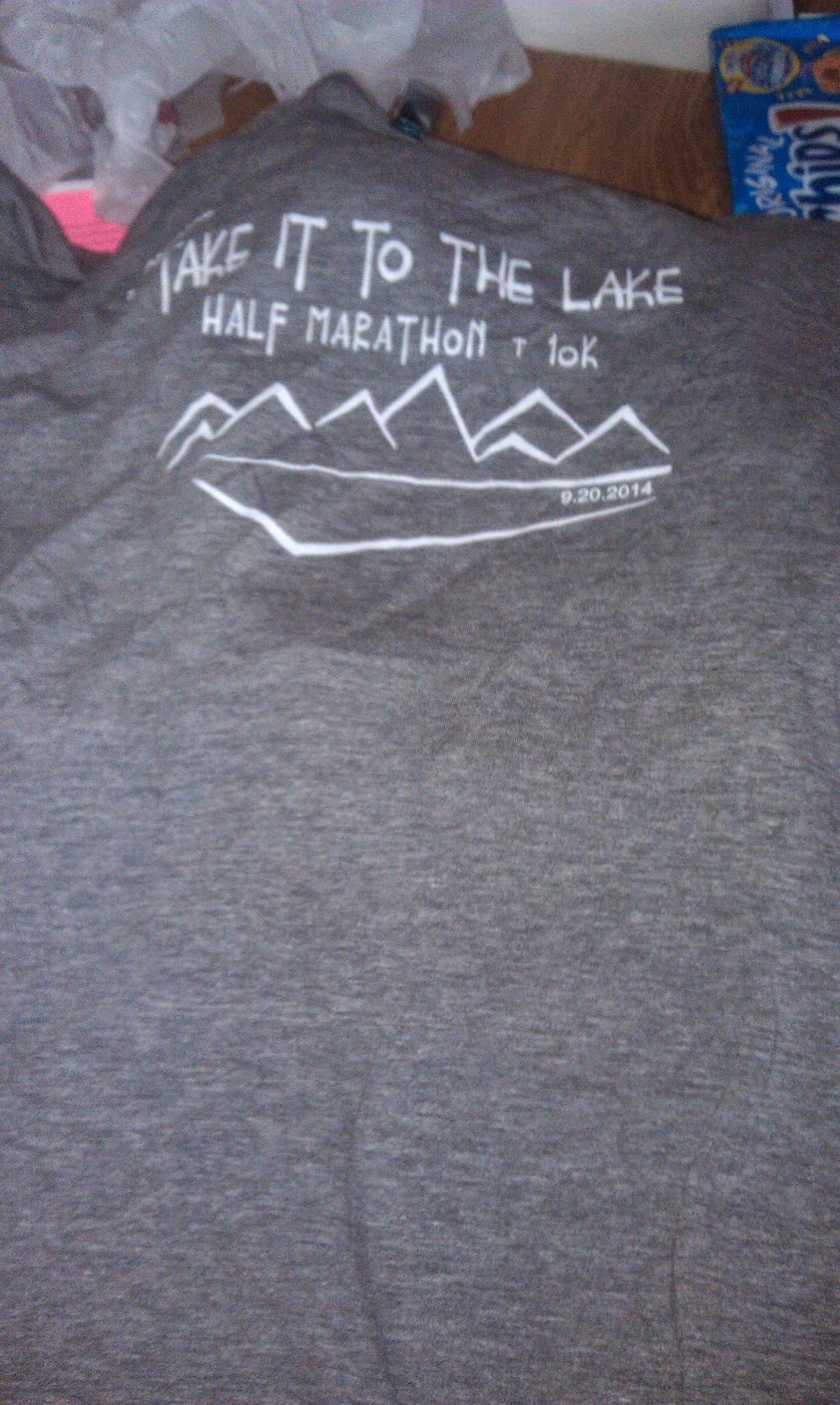 The first half of the race is entirely downhill.  From 7300 to about 6500 you enjoy a nice descent.  I didn't feel like I was out of control (except the first quarter mile, where there is a huge downhill).  While I tried to hold back, it was hard not to let gravity take its course.

Almost immediately, though, I noticed my breathing was labored.  Being that high up and running is something I am not used to.  Also, the gradual downhill, was slowly beating up my legs.  They just felt "tired" and like the muscles were getting beaten up.

People were so friendly too.  There were plenty of high-fives and "way to goes" from just about each and every person.  Even after the race, it was incredibly easy to talk and meet with the volunteers and other racers.

I am happy to report that I didn't have too many issues with any of my injuries.  Although, in the latter half, my right hamstring started to get tight again but I wasn't pushing the pace at that point, so it really didn't become an issue.  I definitely don't think I am out of the woods yet on a pending calf strain, but my runner's knee was pretty quiet.


Back to the Top

There were water stops every 1.5 miles and the course was marked perfectly: my Garmin and the mile markers were 100% in sync.  We had the entire left lane of the road to ourselves, so there was no need to worry about cars.  I wasn't too concerned about my time -- given the course profile I figured I'd be lucky to finish in 2 hours, so every now and then I would snap pictures.  I didn't waste that much time, however,

Other than the final hill, there really wasn't too many spots were I went, "wow, there's a hill".  It was just a slow death march back to the top.  I also made the mistake of wearing black and there wasn't a lick of shade on this course.  While it wasn't insanely warm, I felt warm. So with each step, I was slowly roasting and getting less oxygen.

By mile 10, I was doing the marathon shuffle.  My legs felt like Jello and my breathing was labored.  Drops of sweat were descending from my hat as well and I felt like death warmed over.

As a cruel joke, the last .25 miles is up the final service drive to the lake.  I felt like I was taking baby steps up it.  What kept me going was the knowledge that I had a brief downhill and then the race would be over: 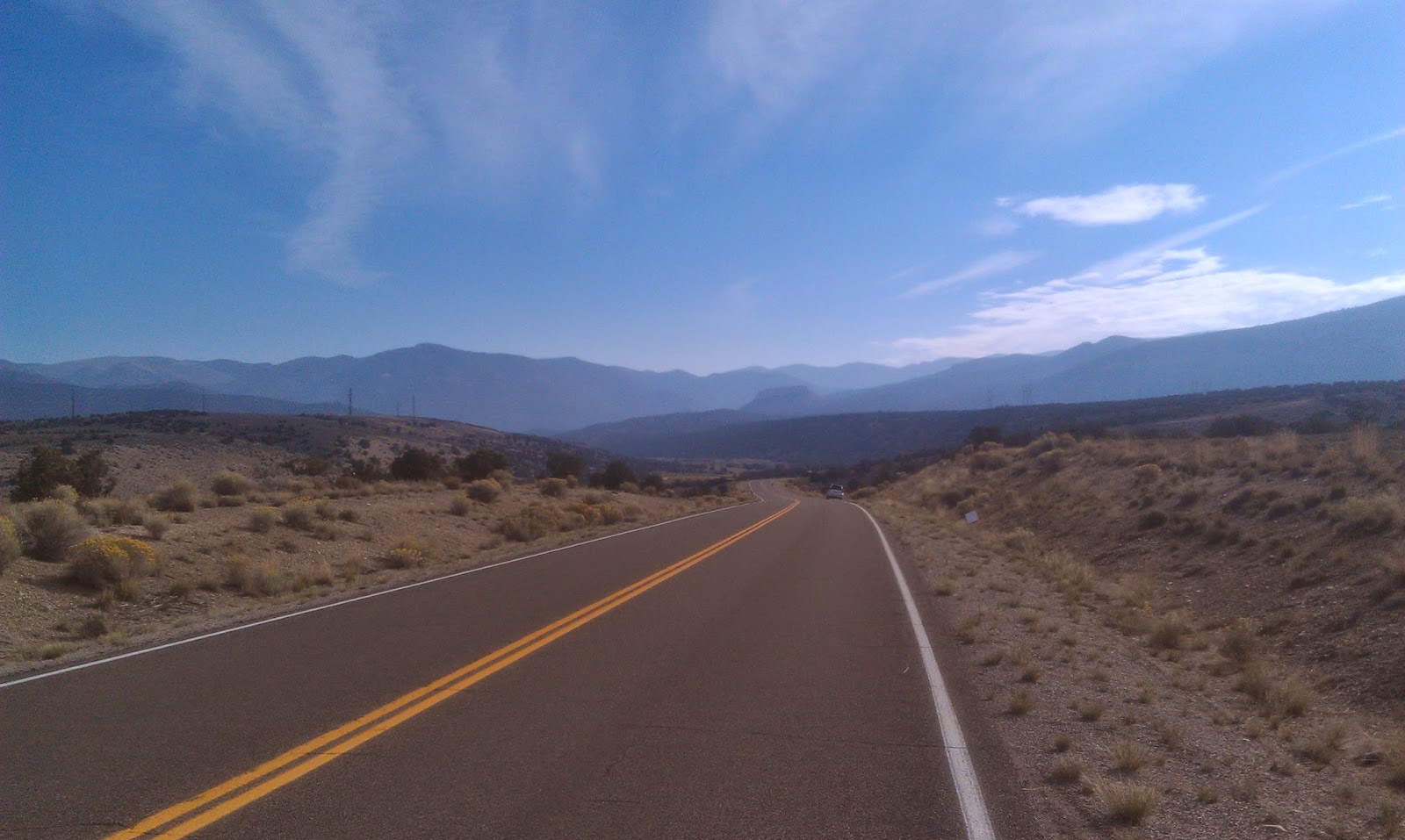 I must've gulped a gallon of Gatorade when I was done.  The combination of the dry heat, the sun and the elevation just destroyed me.  It took about 30 minutes before I started to feel normal again (the EMT had to treat one person after the race).

I figured I came in about 6th place overall.  The people I had passed about half way through the race I never saw them again.  I totally figured they would catch me on the way up because I was totally just shuffling along.  I wasn't thrilled with my performance, but I haven't run a race this high in elevation and given there was about 800 feet of climb I knew it was going to be a rough day.

There was a nice BBQ after the race as well as plenty of fluids, snacks, and fruit.  My stomach was extremely touchy though and I wound up having a very small lunch of salad and potato salad. I don't eat meat, so the hot dogs and burgers (which looked really good) were off limits.

I met some wonderful people from Carson City and it was fun to hear about their life.  As a Nevada-phile, I love getting opinions and learning about what life is like in other cities throughout Nevada.

I left just before noon after getting a bunch of pictures of the lake and surrounding area.  I did stick around long enough to win a cooler in a raffle.

The medal is missing its lanyard but I am told that will come in the mail soon.

Overall, I was SUPER impressed with the team that put on this race.  It was small and most of the runners were local, but they treated it like a big-time event.  The water stations were awesome, plenty of runners support, lots of food at the end, excellent volunteers and a lot of local businesses stepped up in a HUGE way to offer freebies and raffle items.  Whoever put on this event knew what they were doing.

The price was $50 but I registered about 2 days before the event closed, so I had to pay $70.  Still this was a great race to do and I would recommend anyone wanting a challenging race in the middle of nowhere to do this one.

Would I do this race again: definitely!