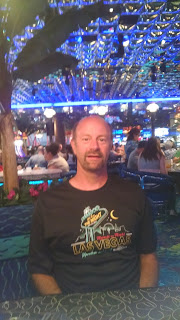 Being that it was Father's Day (as well as Shari and my 18th anniversary) we decided to hit West Wendover to celebrate.  As usual, the Wendover Peppermill group that we normally patronage had sent us a bunch of freebies: a free room, 2-for-1 buffet, 5x comps and $10 in free play.  With nothing else on the docket for the day, it was a pretty easy decision to head west for the night.

We left the house just after 10:30 or so.  We weren't in any hurry other to get there early enough to enjoy the brunch but still give us enough time to gamble and get hungry again.  The trip there was largely uneventful and we showed up just after 12:20.

We activated our cards and I let Shari play the $10 in free play.  In short, she didn't have much luck at all on the trip.  She didn't come with a very large bankroll and subsequently she just didn't have any luck.

Before lunch though, I sat at Fu Dao Le and managed to eek out a very small profit: 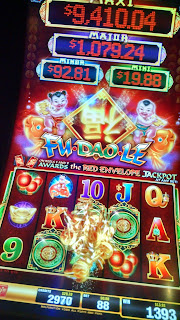 We at our favorite buffet: the Oceano Buffet at Montego Bay.  As usual it was super good stuff and the two of us ate for $18.11 using the two-for-one pass.

After eating, I waddled over to a Fu Dao Le near the sports book and stuck a twenty in.  It was touch and go and as my twenty started to disappear, Fu Dao Le suddenly became very active.  Next thing I knew, my $10 had turned into $100 and then well over $250.

It was funny in the fact that I had a pair of older women (and Shari) sitting next to me and they could tell I was excited whenever I hit a bonus round.  And I was getting them fairly frequently.  These weren't small $5 - $10 bonus rounds, but actually $75 and $100 bonus rounds.  I had my own cheering section and to be honest, we were creating quite a bit of a raucous. 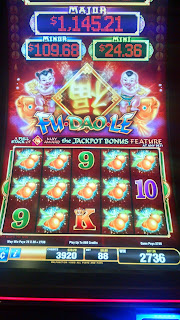 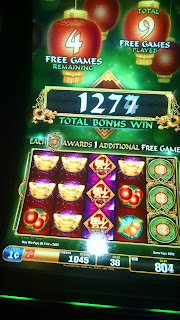 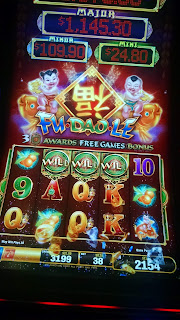 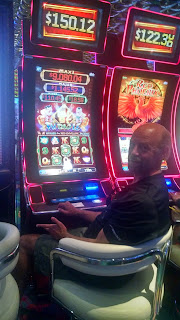 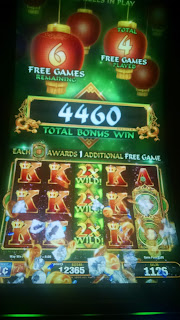 I wound up playing close to 90 minutes and I realized that once my streak was over, that it was time to cash out.  Also, my streak pretty much lasted as long as the cheering ladies who were sitting next to me were there.  As soon as they took off, it seemed like Lady Luck had disappeared.

At that point we checked into the hotel and got our room.  Since it was a holiday and we were celebrating our anniversary they upgraded us to a pool side view, which was really nice.

I wound up chilling in the room for a bit since it was sort of too warm to go to the pool.  We have had some really warm weather in Utah and it felt like a hot air dryer outside.

Closer to 6pm I headed down for a swim and a soak in the whirlpool: 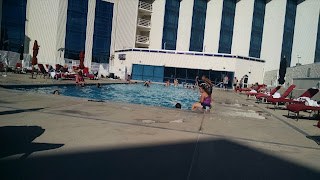 After cleaning up, Shari and I gambled and sadly I didn't have much luck after that.  While it was awesome we were earning 5x comps I just wasn't getting anywhere with anything I played.  Again, it was as if Lady Luck had left me behind.

We wound up eating the Sunday night buffet for absolutely free with our comps (we also had enough comps to eat for free next time we go too!).

I slept okay that night. However, it seemed like air conditioner couldn't keep the room cool enough and I wound up feeling like I was roasting.

Since I had to be to work on Monday I woke up at 6:15AM, cleaned up, through my stuff in my bag and made the 100 minute drive back to Salt Lake City.  I was totally expecting a lot of traffic once we hit the city, but to be honest it was completely smooth sailing all the way in.  It was sort of depressing to leave Wendover in the morning before eating or doing a run, but it had to be done.

This trip, like the last, wasn't too profitable.  Despite my early run, I wound up losing about $100. Shari, we figured, lost about $50.  Considering we largely ate for free and had a free room (and it was entertaining) it sort of all balanced out.

Hopefully I have better luck next time though.
Posted by Eddie Gaul at 7:09 PM