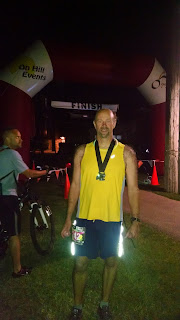 
It is that time in Utah where the temperatures have turned hot and the night racing has begun.  I did the Provo Midnight Run last year (which you can read here) and had a pretty decent time.  Looking for something to do this weekend I decided to hit the race up again.  For $65, I had a pretty good experience and ran reasonably well.  Also, I rarely make it down to Provo and they have a really nice bike trail system that I enjoyed running on last year.

Running a night race is always a bit challenging on what to eat.  Granted the race started at 10pm so I had some time to digest my food before the race started.  I opted for a decent-sized stack of blueberry pancakes (at 4:30) and of course a can of beets around 7pm.

I hit the road around 8pm and almost immediately got into heavy traffic.  It looked like there were a pair of stalled motorcycles near the fast lane and they are doing construction in the area, so there was no shoulder for them to get themselves out of the way.  Consequently there was a good mile or two backup of stop and go as gawkers proceeded through the area.  What should've been a 30 minute trip took nearly an hour.

Packet pickup was a breeze and I had about 40 minutes to kill (which went extremely fast) before the race started. 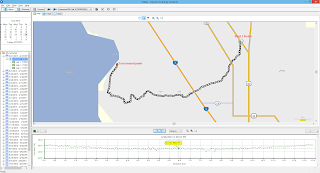 
The race started at 10pm and about 100 half marathoners headed down along the Provo River Bike Trail.

Initially, the route was congested and I was hemmed in by people running 2 and 3 abreast.  I knew from my past experience, though, that the crowds would thin out.  Sure enough, after about half a mile I was able to get past people and be able to run at my own pace.

It was extremely warm but the river seemed to help keep the temperatures cooler.  Part of me wanted to hold back because I knew that I'd likely pay a price for going out too fast.

Being that this was a night race it was extremely tough to figure out what my pace was.  Granted, I had my Garmin but having to fiddle with it, while watching out for roots in the asphalt on the trail just didn't work.  I also was carrying a head lamp and my iPod shuffle (no phone this time).  Occasionally I would check the distance (there were no mile markers) but I wasn't terribly concerned with my pace.

I was pretty happy with the first half of the race except I did go out a little too fast.  I didn't see many other people in front of me when I reached the turn around point.  Although I knew the final 6.5 miles were going to be a challenge.  While my breathing seemed fine, I just felt incredibly thirsty and my stomach was sort of "off".  Also too, I had gas -- luckily the racers were spread far and few between.

For the first half of the race I pretty much hung with a few guys who were my age.  I was trying to keep up with a 1:50 pacer but he got off to a good start and I suspect he was running significantly faster than 1:50.

However, as the race progressed I wound up dropping the guys I was working with and by the time I was at mile 6 I had a young man within ear shot of me and no one behind me.  I knew I had a good shot at finishing in the top 10 and if I could hold my pace without blowing up too bad, I should cross in under 1:49,

The second half of the race went well but I knew I was hurting and the last 5K was a crawl.  I just couldn't muster up a second wind despite my head wanting to.  I was working with the same young man (it was his first time on the course and he seemed to want to take every wrong turn).  I also wound up catching one of the first women in the race and we were swapping positions every half mile or so.  It was also nice to work against the outgoing and incoming 10K / 5K racers (who had started at 11pm and 11:30 respectively)

Part of me was sort of holding back too.  I was a little worried about having another episode like I did in Helena.  Also I was having problems seeing.  I think the blinding lights from oncoming headlamps and the constant adjustment I was having to make after being blinded by them made this a challenging race.

The trail wasn't too bad, but there were definitely a few spots were I stumbled on a tree root that was cracking the pavement.  Definitely during the darkened portions of the trail, I was using my headlamp.

The first third of the race was on bike trail near "civilization".  There were people riding skateboards and there were parks near by, so it was a well-used section.  After about 3 miles, though, the trail gets more desolate and you are definitely in the "boonies".  There is heavy tree line blocking most of the moon's rays, so it was challenging to see.  Also, near the turn around point, you are very close to Utah Lake and a camping area.

Since this was the second time I've run this race, I knew the course (it is flat).  However, I came to a dead stop at about mile 8 as the trail forked.  I hadn't seen the fork on my way out but there really wasn't any marking on which way to go.  I wound up waiting for about 15 seconds for the man I had just passed to catch up with me.  We wound up taking the right fork (I think both trails led to the same spot) but it was disconcerting that it wasn't marked well.  The rest of the race was well marked though and other than that one spot I wasn't worried about getting lost. 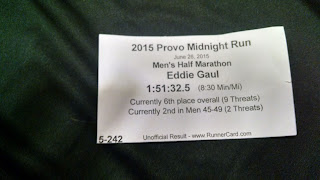 Water stops were also at 1.55, 3.10, 4.55 and 5.55.  Gatorade, gels, and water were served.  A few of the stations didn't really seem to know what they were doing.  Also I practically fell on my face when I went through the second station -- they had put the trash can right in the middle of the bike trail without anything in front of it to indicate that it was there.  I saw it at the last second and manage to sort of hurdle my way over it.  That could've been really bad.

The course came out short according to my Garmin.  Granted there were a few spots where my Garmin sort of stopped working because I was under a length bridge.  The 5K and 10K courses were spot on.

I was really surprised at how well I finished.  My time wasn't what I was hoping for, but overall, I finished pretty high up in the ranks.  I also won my age group (the results show I was second, but I think the first place guy was in the top 3 so he was pulled out).

After the race, I grabbed some peanut butter sandwiches and drank a ton of Powerade.  I also kept moving.  I only felt a tiny bit of "wooziness"

Also just as the majority of people were hanging around getting food and beverages, the host hotel's lawn sprinklers went on, soaking a lot of people.  Luckily, people had spare buckets to cover the sprinklers but it did create a wet and soggy lawn.

The race had a TON of women.  If you look at the results they outnumbered the guys 2 to 1.  Also the majority of the folks were in their twenties.  There weren't a lot of older folks.

This race series has really upgraded their medals over the years.  In 2012 I ran a sister race of this one and got a plastic flashing medal, which was nice, but definitely not top of the line.  This year's medals are heavy, have flashing lights and have a nice ribbon on them.  Definitely a show piece.  The t-shirt follows last year's theme (at first I thought they were recycling last year's shirts but the date had indeed been updated). 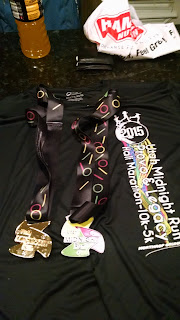 I really enjoyed my race and I wish my time had been better.  I think part of it was stomach issues and another part was that it was HOT.  I didn't feel 100% once the race started and part of me wasn't really in the mood to race.  Part of it may have been residual effects from the Helena Marathon two weeks ago.  Either way, I did place well and came home with some good swag. 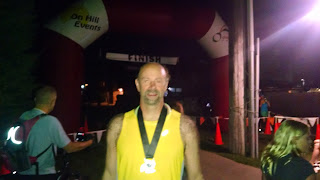