Normally we don't do a whole lot for Christmas.  Being that I am mostly an empty nester and most of my family is either in the midwest or southern California, it only make sense to take advantage of the extended weekend by heading out to Wendover, NV for a quick gambling jaunt.  Sacrilegious?  Perhaps... but why not have fun?

Also, I got bonus points for taking my mother in law as she likes buffets and casinos almost as much as I do.  So with a 2-for-1 buffet pass, $10 in free play, $70 in comps, and 3 free nights and a free entry into the slot tournament, how could I say no?

Wednesday was a half day at work and after making a quick vet run to get a cat taken care of, we hit the road just after 2pm.  It was smooth sailing the entire way.  We had toyed with going on Christmas morning, but with a pending storm, we knew we had to hit the road on Christmas Eve.

We arrived just before 4pm and got everyone settled into the Montego Bay.  We grabbed our room and I lugged up the luggage.

The casino, at first was a ghost town, but as the night wore on, it did get mildly crowded.  It looked like a lot of other people were taking advantage of the long weekend and arriving.  We gambled a bit but nothing was hitting.  After a while we sat down and I cleaned up at the buffet.  Shari and I used our 2 for 1 pass and ate for about $20.  There wasn't anything special for a Christmas Eve buffet but none the less I cleaned no less than 5 plates of food down.

We gambled a bit more in Montego Bay and none of us were having any luck.  Soon between Shari and I we were down about $60.  I got a few bonus rounds on my favorite Fu Dao Le Machine, but I didn't get anything more than $5 on each bonus round.

Looks like my post-Vegas bad luck was continuing to stink up the joint.

Since we had gambled  enough each of us got to spin a wheel for either free play or tier points.  We were hoping for free play as we are no where near the next level but each of netted a few tier points.

Since none of us were having any luck, we decided to call it a night at about 9:30 and we were pretty much sound asleep by 10. 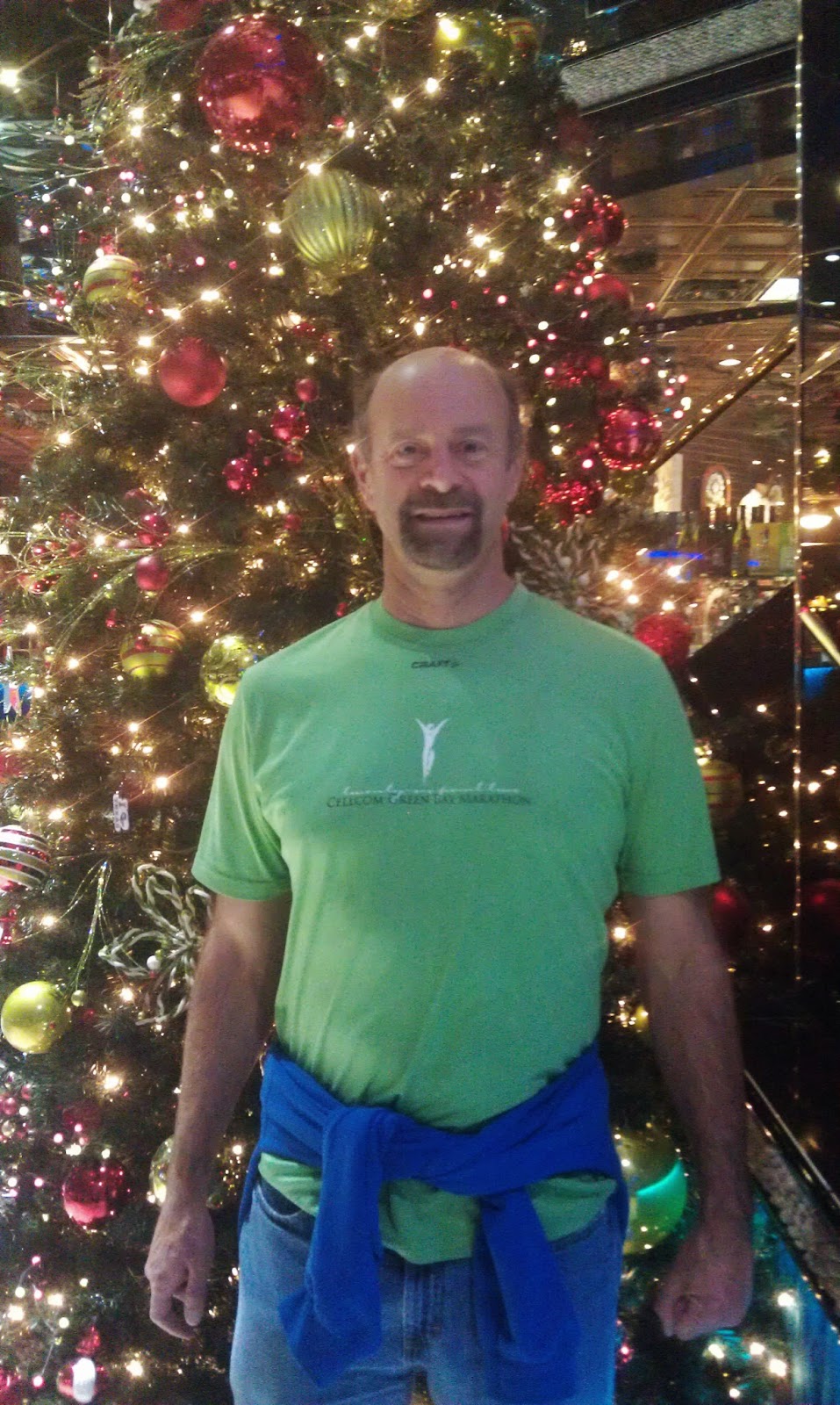 As tradition holds, I got up fairly early and threw on what little running gear I had and went out for a run.  At first, I didn't think I was going to get more than a mile or so in.  My foot was better but I had my doubts as to how far it would hold up. Also the air temperature was in the low thirties and the wind was blowing no less than 30mph, in strong gusts.

I was decked out in my wind breaker, paper thin gloves, a beanie hat and shorts.  I took off fighting the wind and my pace was really sluggish.  I went about 2.5 miles out into the desert and decided to wrap it up.  I had really dressed or prepared for anything longer and my foot was still in doubt (I am happy to report it gave me zero problems). My hands froze, but otherwise it really wasn't that bad.

I did climb a cliff or two and the wind was so strong out there I thought it was going to throw me over.  Also the wind kicked up the sand and snow crystals making them feel like you were being pelted by little shards of glass.  Just a gorgeous morning for a run though.

I did manage to get some pretty cool pictures: 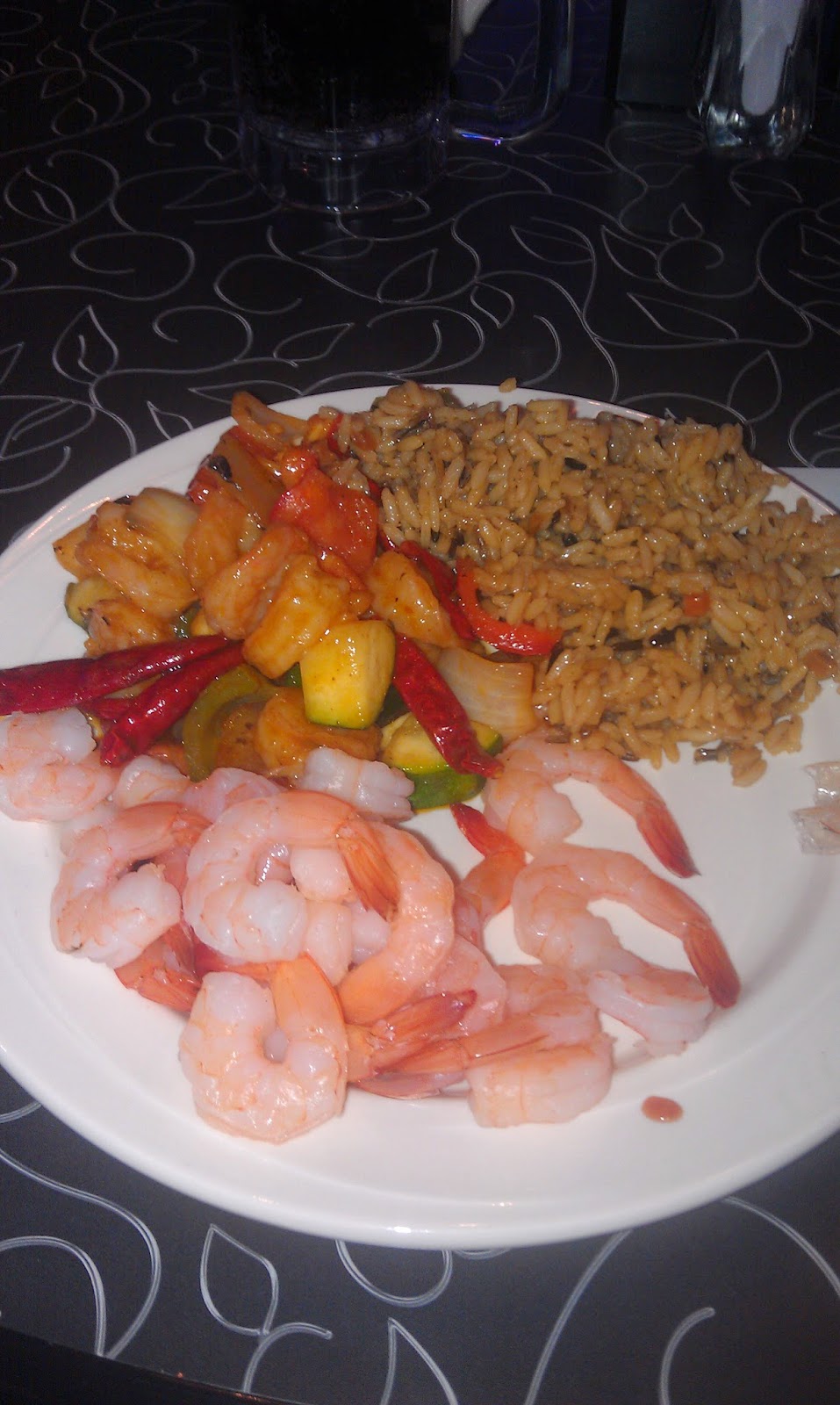 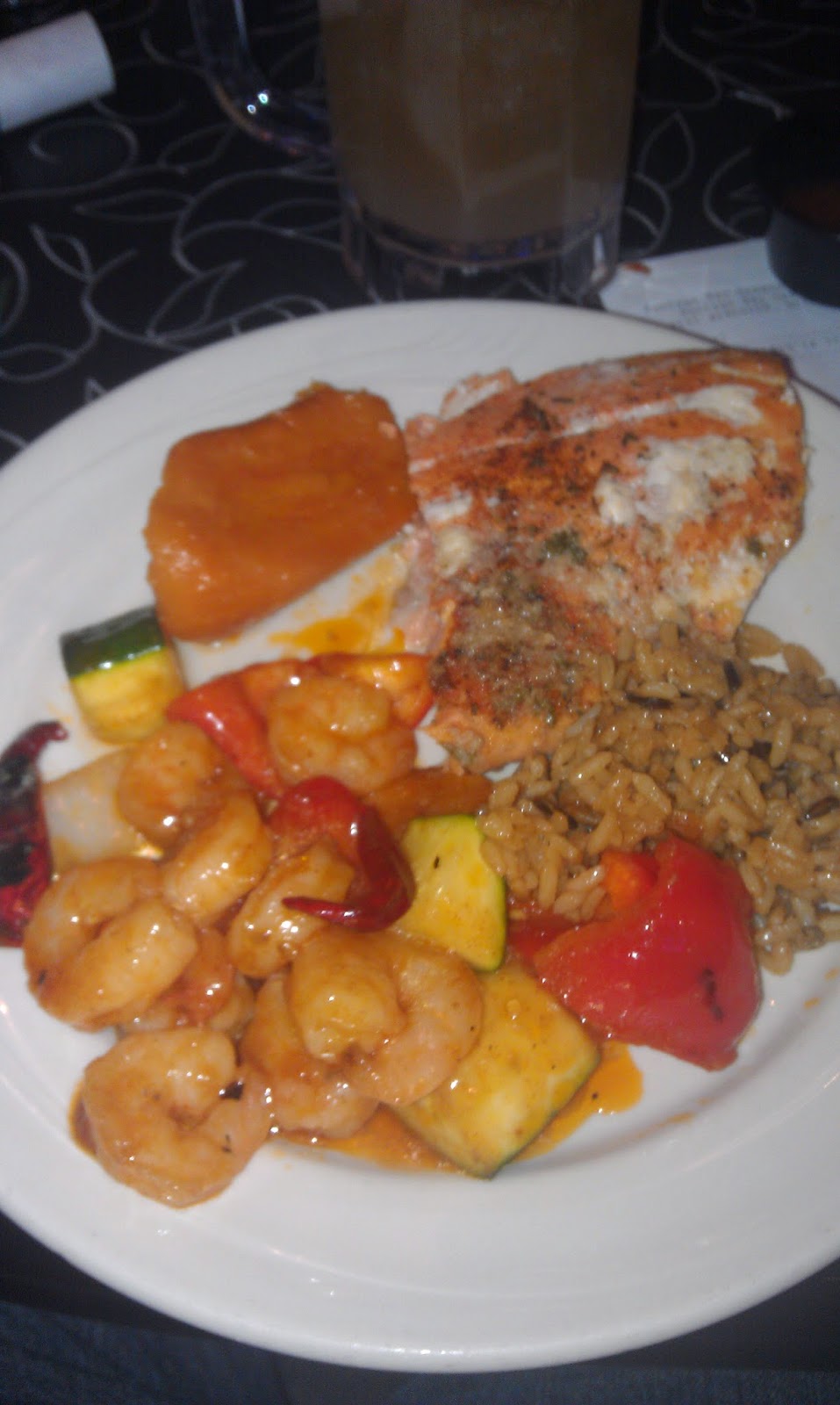 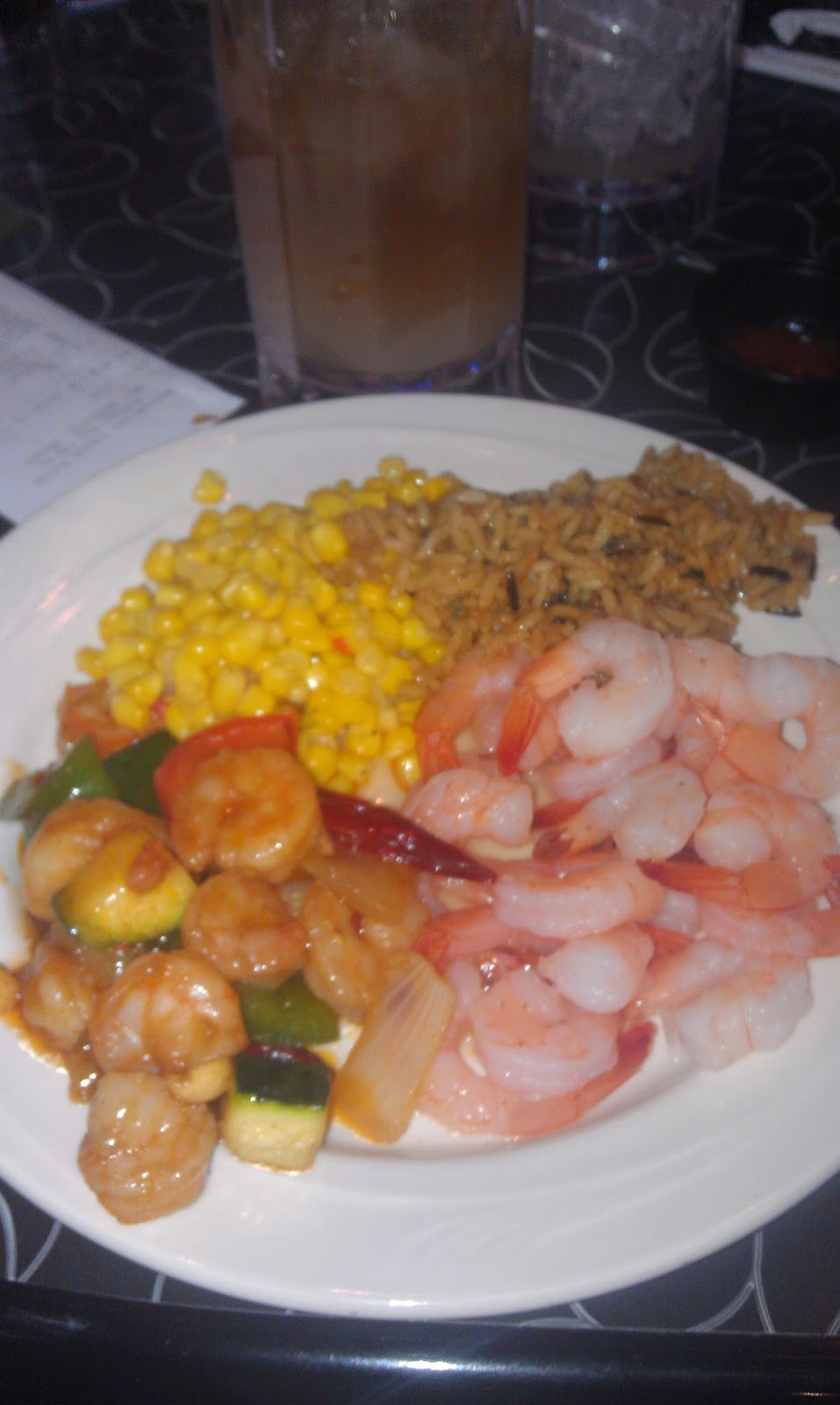 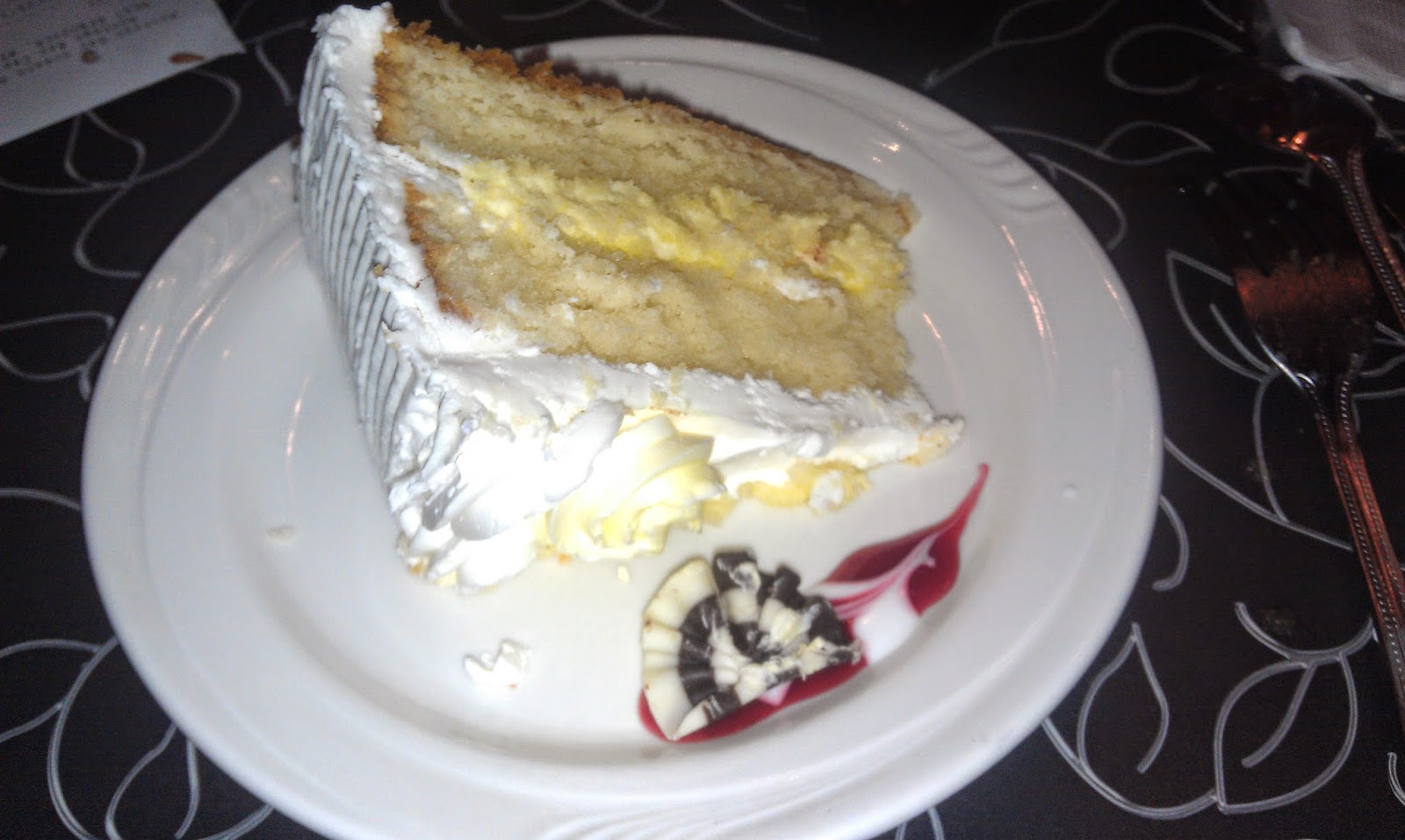 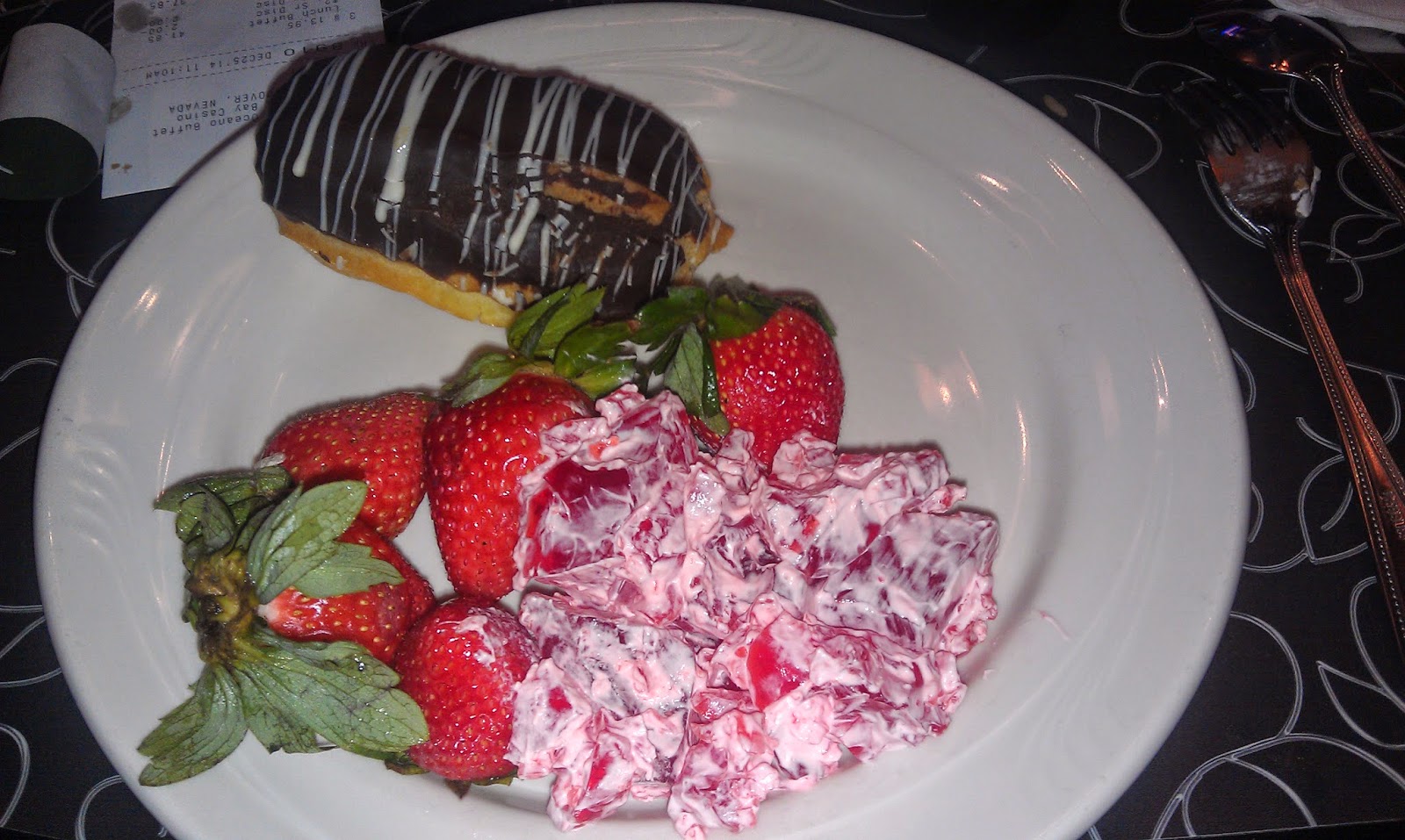 After eating we hit up the Montego Bay casino and tried our luck.  Again, nothing.  Instead of gambling I was just simply losing.  Before I knew it, I had lost about $100 on top of what I had already lost.  My mother in law was doing even worse.  We were getting some comp dollars (at 3x) but we would have to do some serious gambling to even earn a free meal.  I wasn't betting recklessly, I just wasn't getting any hits.

We headed on over to the Rainbow to try our luck there.  I usually have the worst luck there but Shari and her mom were hoping for greener pastures.  I wound up playing a bit more there but my wallet was getting pretty thin and I was wondering if I was going to have to hit the ATM.

I dabbled with some video black jack:  I'd throw in $5 and bet 25 cents a time just to kill time.  I wound up cashing just about every instance -- not much, but a few bucks here and there.  Before leaving, I waddled up to Fu Dao Le which had a high red letter envelope jackpot and threw $20 and I finally got something, a nice $81 bonus round.  Yeah for me, it helped diminish my losses!

After the Rainbow, despite my winnings, I was in a semi sour mood.  So I dropped Shari and her mom at the Peppermill and I took the shuttle back to Montego Bay (first time ever taking a shuttle - I'd normally walk but Shari and her mom pleaded with me not to - the wind was howling and it was super cold).

I wanted to hit the Jacuzzi before it got dark.  It was still absolutely freezing out and when I did gain entry to the outdoor pool, and the people at the desk thought I was crazy.

I wound up soaking with a pair of Canadians and we swapped stories about hiking and places to check out.  I wound up spending about an hour in the pool -- and while my head got cold, I was completely comfortable.  I did have to do a mad dash inside though once I was done.

We ate dinner at about 7 and I used the last of my comps and had to pay about $20 to get the three of us in for the dinner buffet.  Once I again, I inhaled way too many calories, but it was super good.

After that I drove to the Peppermill for my first ever slot tournament.  As part of the Christmas package, I got free entry into the tournament and round 1, for me, started at 8:40 at night.  I had never done a tournament before, so this was all new to me.

I found the spot and basically the deal is you are assigned a slot machine, you get 200K credits and have to spin for about 1800 credits per spin.  These are old-school 3x5 row slot machines (they looked like IGT brand) that don't have anything fancy about them.  For about 5 minutes, you wail on the button and hope for the best.  I got a respectable 133K points that I later found out put me in about 167th place out of 500 or so.

Afterwards, I wandered around the Peppermill.  I found a Fu Dao Le with a high red envelope bonus round and popped a $20 in it.  Within a few spins one of the red envelopes popped up on the first reel and a ton of them appeared on the last reel.  But none of them stuck.  Argh... I just about had a heart attack in anticipation though.

I played another 10 spins or so and then the red envelope again appeared on reel one (this is rare, BTW, especially at 38 cent bets) and sure enough, bam!  It appeared on the last reel.  Caching! $165 richer! 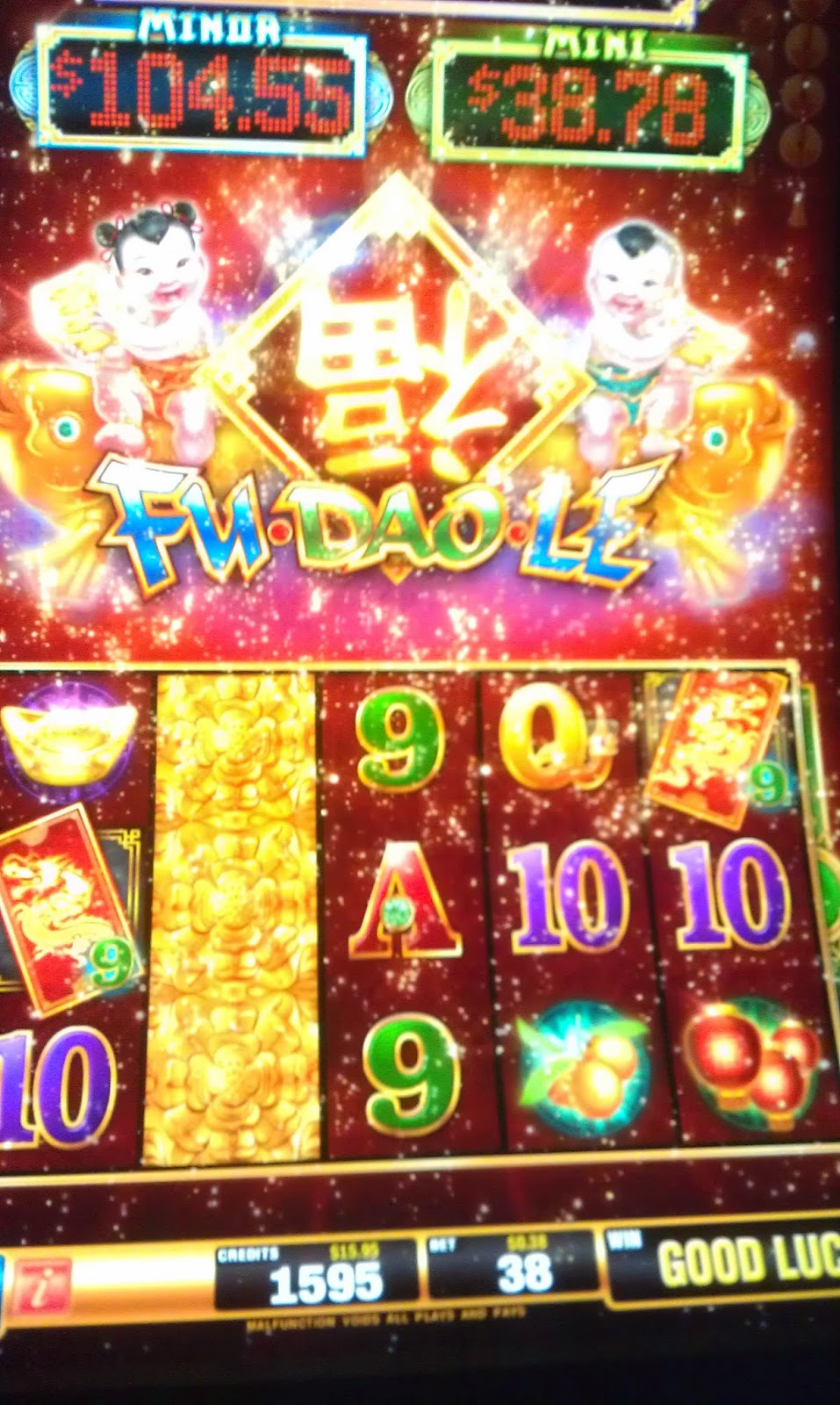 I dabbled with some more low rent black jack and I always won a few bucks.  When I got back to the hotel I found out I was just about even, excluding tips and money Shari had gambled.

Since Shari and her mom weren't have any luck, they opted to go to bed.  We slept reasonably well, but there was a crying kid / baby in the room next to us that woke us up in the middle of the night twice.  Why do people bring their kids to Wendover?  Stupid....

We all slept in pretty late and I thought about doing a run but I decided to give my foot another day of rest.  I jumped into the jacuzzi once the clock struck 9AM and found my Canadian friends back there.  We easily chatted about life and hiking for a good hour.  Friendliest people ever.  I almost always meet cool pool in the tub out there.

After an hour-long soak I cleaned up and I hit the buffet. I love the Friday buffet since they have a seafood ciopino that is to die for.  Since I was one of the first in there, I had prime pickings for the crab legs in there.  I had three plates of the stuff: 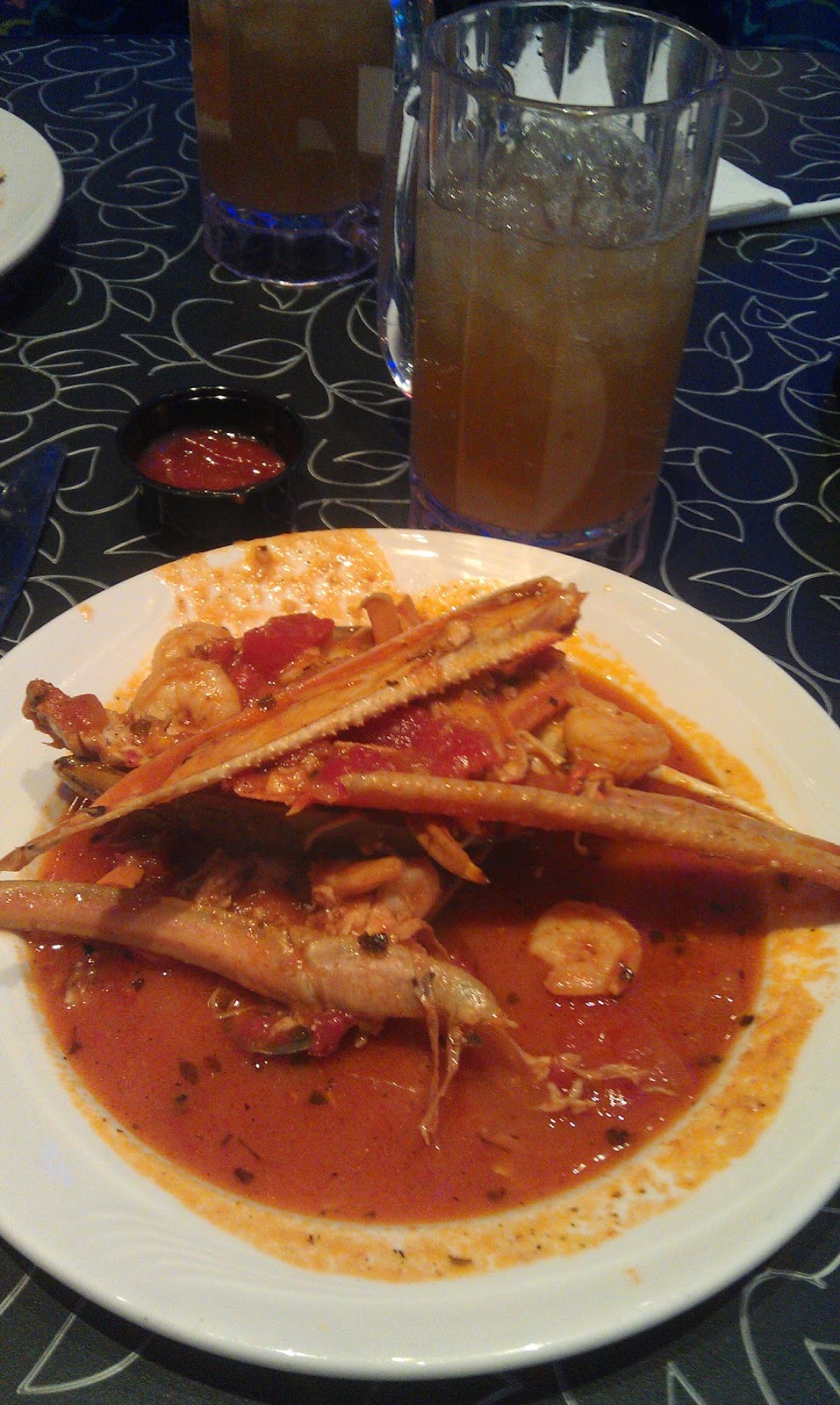 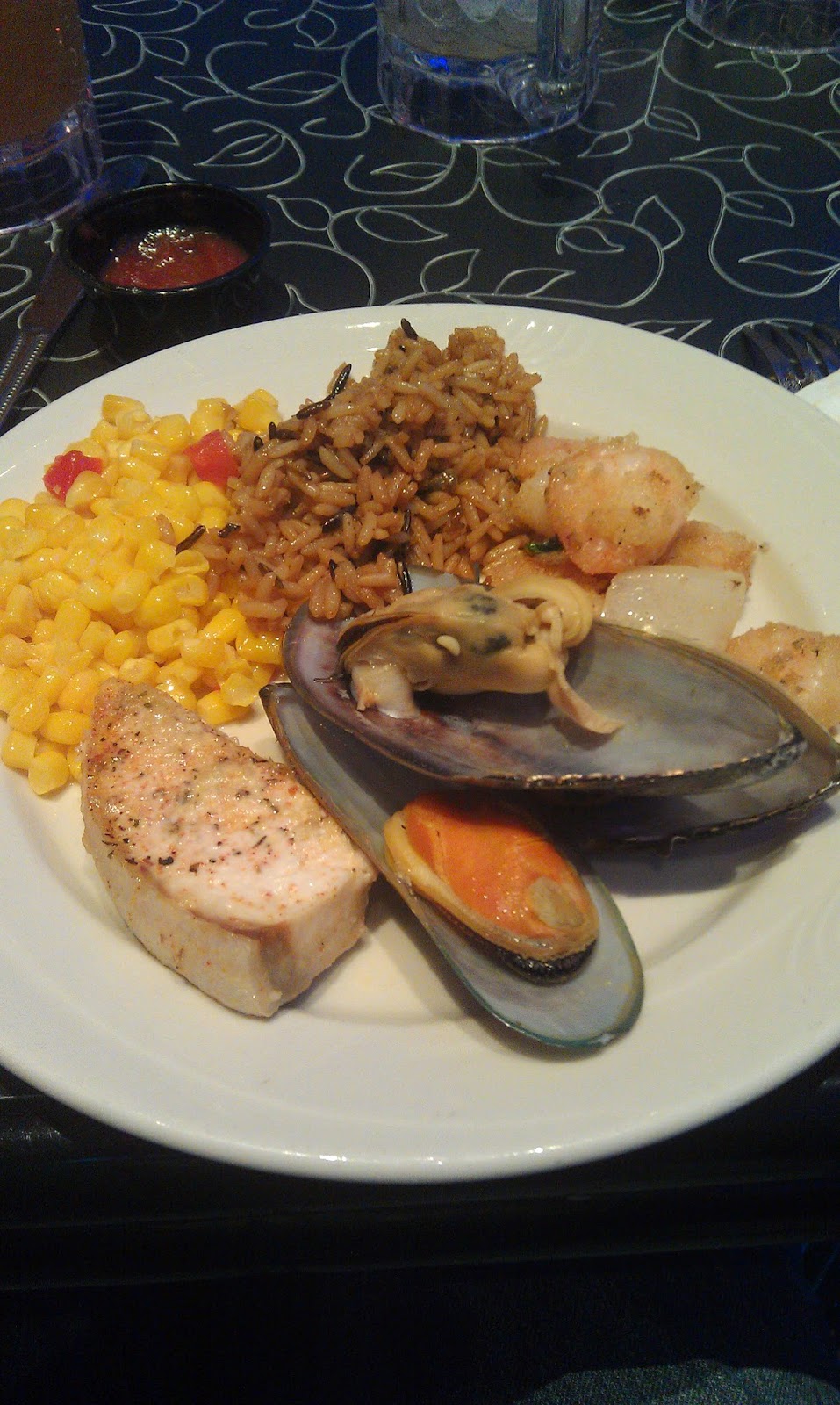 After eating, I packed up our gear while Shari's mom gambled some more.  The poor soul: she came out to visit us and was getting nothing.  Since I was the winner (or at least playing and breaking even) I was the bank and had to loan a few bucks out.  Despite her best efforts the casino was vacuuming out her purse.

At about 2pm I headed over to the Peppermill for the final round of the tournament.  I jumped on a machine and got about 144K points, definitely above average, but I wouldn't be threatening the leaders.  I am guaranteed at least $15 in free play if I come back in the next 30 days.  I could be due a bit more depending upon how I placed.  I am not expecting much more than $15 but if I do go, I'll take advantage of it.

I put in a $20 in a Fu Dao Le machine and got nothing from it. I did fool around with close to a dozen black jack machines.  I'd play 25 cent black jack for 5 - 10 minutes, make a few dollar profit and go watch someone gamble or what not.  Before I left Wendover, I had a wallet full of spare singles and quarters that I had made.  I am not gonna get rich doing it, but it was a good time killer.  Plus it gave me an opportunity to sharpen my black jack skills.

This was a decent trip.  I got in 4 buffet sittings between Shari and I (so 8 meals total).  I wound up paying for my mother in law in most of the instances, and my total food bill was probably around $60.  The hotel was free, I got $15 in free play the next time I go (if I go in the next 30 days), and I had fun.

Gambling-wise, I probably came out slightly ahead, but I probably had $60 less in total money in my wallet than what I came with: tips and Shari's losses are not counted.  I only played Fu Dao Le (pretty much the entire trip, with the exception of $5 here and there) and I played a LOT of video black jack.

I was pleased with this trip and we managed to dodge all the bad weather Salt Lake had over the holiday.

I definitely need to get some miles in to work off the damage I did to my waistline, however.