I admit it, I've been a little light in content of late.  And I've felt it personally.  With no races, no hiking, nothing new and adventurous of late I've been a little on edge.  My weekend has been filled with a long run followed by an afternoon of watching football.  Not exactly conducive to an exciting, well-lived life.

So I *had* to do something and with that I began formulating plans of going out to Elko.  With the weather being good, this normally treacherous drive became a snap.  Shari hadn't been out to Elko either, so this was an opportunity for her to see what I've been talking about since the last time I went there.  In addition, it would give me ample opportunity to explore the city side of things.

With that, I made 2 night reservations at the Red Lion Hotel and Casino in Elko and headed out west.

I managed to get off of work a little early for a Friday, thank goodness and by 5pm we were on our way west along I-80.  I am also happy to report that they have once again increased the speed limits on the freeways.  They are now 70.  While this won't save me a tremendous amount of time, it was nice to go a little faster.

We left Salt Lake City with 60F weather and by the time we got to Elko, it was about 34F and snowing.  While we only had to face the snow for about the last 10 miles, driving conditions were excellent and we arrived just after 7pm Pacific Time (so a little more than 3 hour drive).

It was a little heart breaking to pass through Wendover without stopping.  I was sort of tempted to stop and get the seafood buffet, but Shari doesn't like seafood and the thought of shelling out $27 for dinner was a bit too much.

The first order of business was to get our player's club cards.  I had lost mine (I think I misplaced it while making reservations during the week).  Besides, they also had my old address and had been sending me flyers to the hotel that I was living in back in February.  Luckily, I had made a stop to the hotel early in the week and gotten this flyer, as it was loaded with money saving coupons.

Perhaps one of the coolest things of the trip was that I had a coupon for a free night.  I wasn't expecting them to honor it at all.  I hadn't mentioned it during the reservation process and being that it was a weekend, I figured I was going to get stiffed.  I am happy to report: they honored it.  Props to the Red Lion people.  Savings: about $86!

We checked in and then quickly jumped into the cafe for a bite to eat.  We were both starving and had had nothing to eat except a few cookies that I had brought along for the ride.  I toyed with going to the buffet, but once again it was $27 and the seafood buffet looked a little "tired".  You had to crack your own crab legs and the fish looked dried out.  I settled for a trio of fish tacos and a side of garlic fries.  Talk about a home run!  Plenty of fries and the plate arrived almost faster than I could blink.  I also had an $8 coupon, so the two of us ate for about $15.

After eating and throwing our stuff in our room, we gambled a bit.  Shari had gotten some freeplay on her card for being a new member and I had a coupon for $8 in freeplay.  Sadly, this was the only time I won during the entire trip.  After netting about a $30 profit, it was all downhill from here... so if you are looking for pictures of high paying jackpots, you can stop here.

We gambled a bit at the Red Lion, playing Fu Dao Le and some Planet Moolah.  We also walked across the street to the sister property, Gold Country Inn and gambled there too.  But at this point my luck had run out and it was disappointing.  By the time I hit the hay I was about $50 in the hole.

I slept reasonably well, although we had a hard time figuring out the HVAC system and at first the room was way too hot.  My the time I had my mitts on it, it was practically snowing in the room I had made it so cold.

I got up early and went for a glorious run, which you can read about here.

After returning and cleaning up, Shari and I waddled across the street to Jr's Family Restaurant at the Gold Country Casino.  I had toyed with a buffet, but I am trying to eat a bit better and it was around $16 for the buffet.

I hadn't eaten at the restaurant before and it is your typical casino cafe.  It was well populated and therefore it took a bit to get the food (I think a high school track team was there eating).  I opted for an omelette, which was fantastic and kept me filled throughout the day: 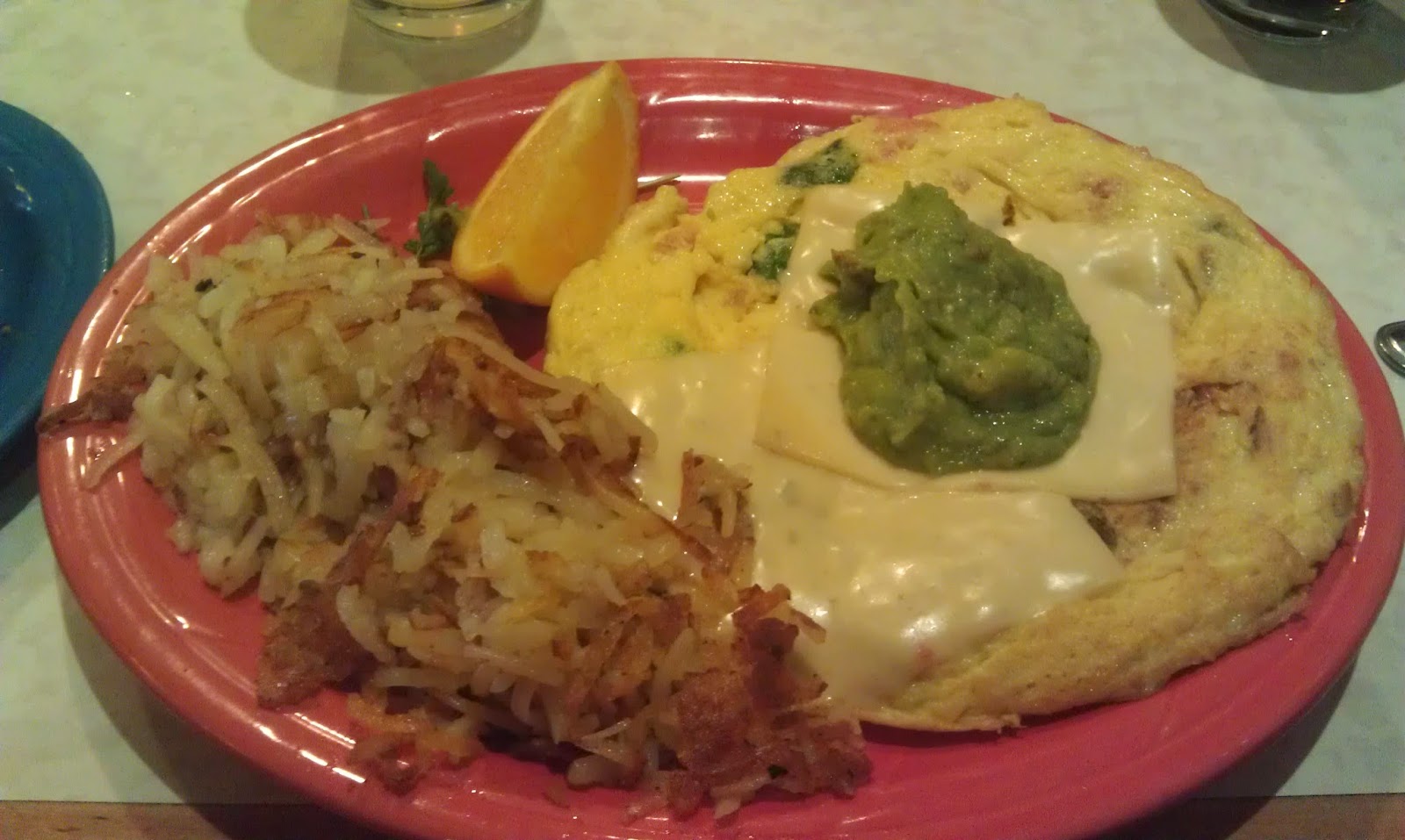 After eating, we went back to the Red Lion casino to see if our luck had changed.  Nope... it hadn't.  Luckily we knew our limits. 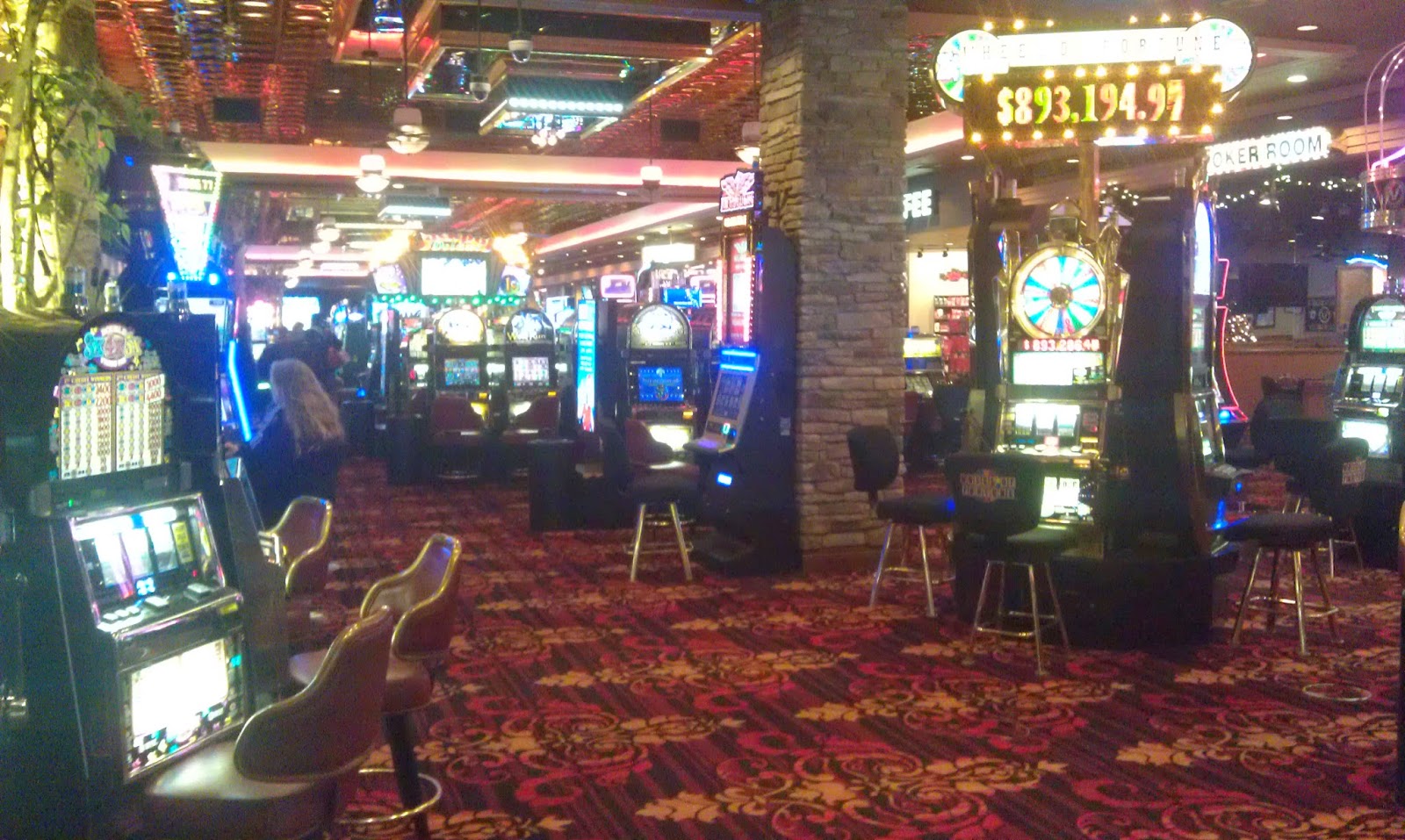 We opted to walk across the street and do a little shopping.  That is one of the nice things about small Nevada towns.  No traffic, no massive crowds, just walk into Jc Penny's and buy a few things.  Plenty of workers to help you out and the wait to pay was under 30 seconds.  I did buy a new jacket as my leather jacket I had was starting to look very frayed and I was feeling like people thought I might be homeless.

After coming back with our goods, we went to the Northeastern Nevada Museum, which you can read about here.

After an hour nap we decided to head downtown.  While I had been downtown on a run and a quick picture getting session, I had never stepped foot in any of the casinos there.  They had the Stockmen's Casino and the Commercial Casino.  Both of which I was interested in seeing, since I really like nostalgic casinos.

Our first stop was the Stockmen's Casino, the biggest casino downtown: 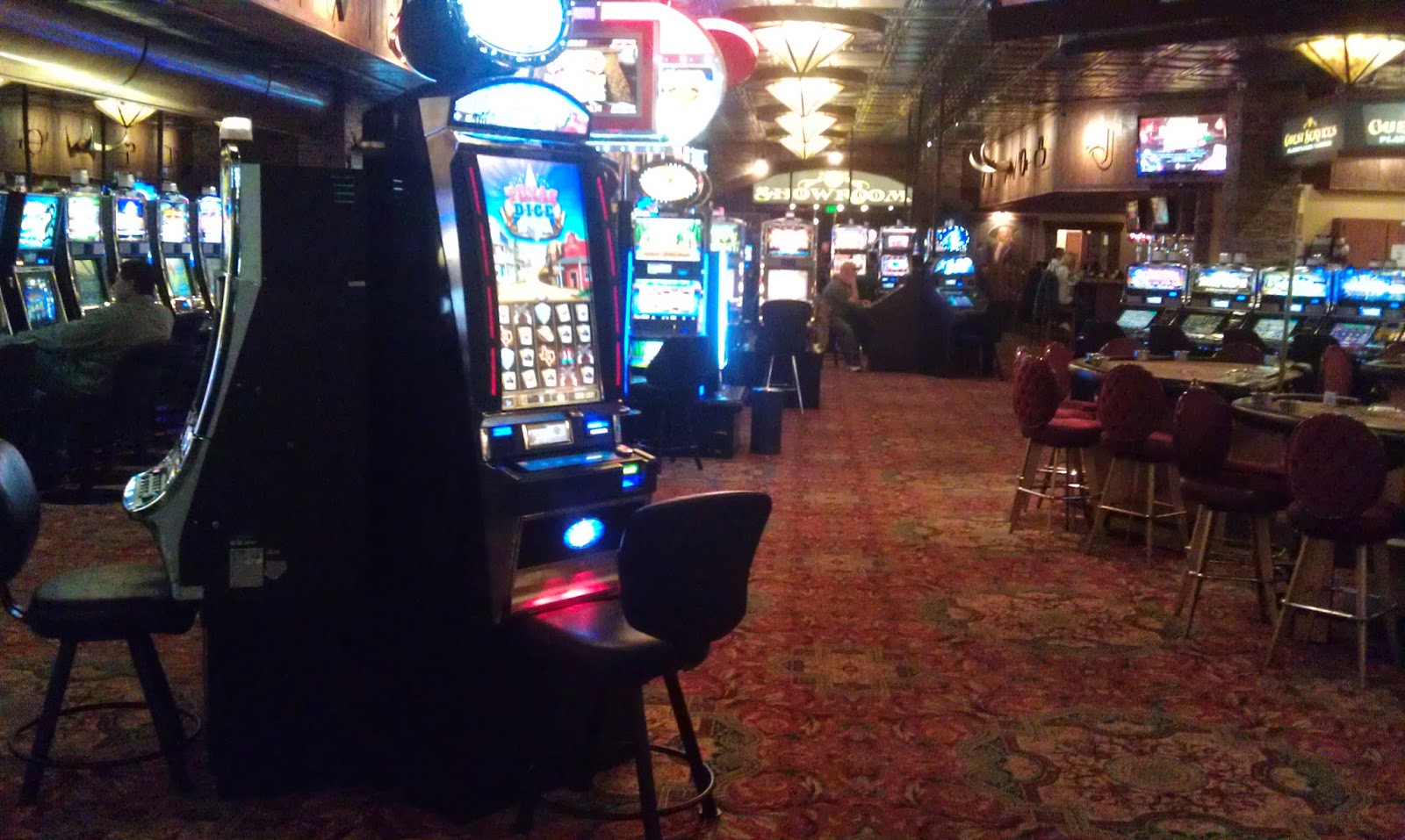 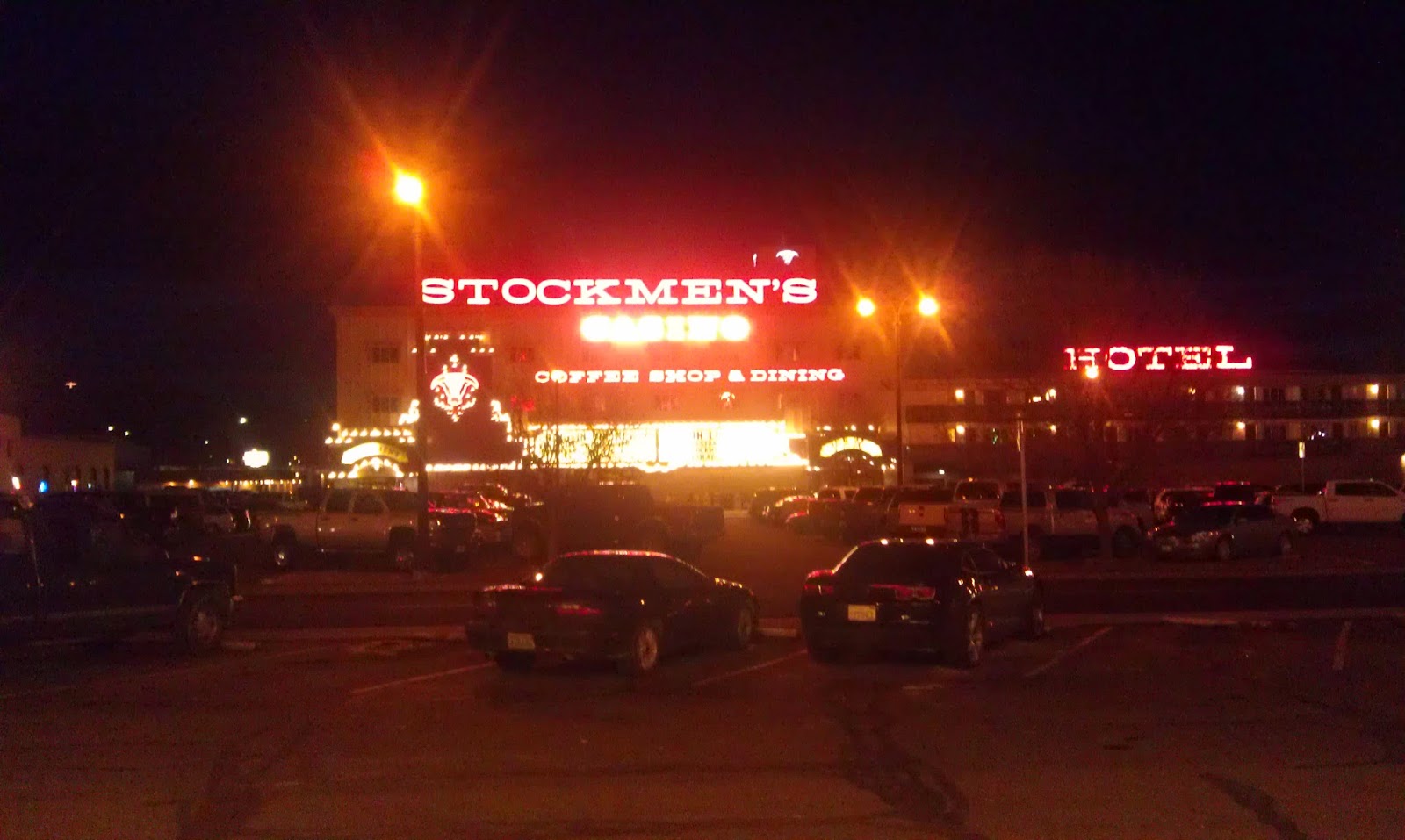 We both signed up for the player's club cards since they were offering free play.  Shari put in a $20 into a machine and quickly turned it into a $10 profit.  Probably her first win and I think our last "real" win of the trip.  She also played enough to activate her free play.

Stockmen's is definitely an old school casino and most of the slots are pretty old.  Lots of WMS brand games: Zeus, Planet Moolah, etc.  There were a sprinkling of newer machines.  I had hoped to see some table games, but there was none of that.  Just a slot hall.  It wasn't terribly memorable and it seemed sort of dead inside.  I guess from some of the descriptions online I had figured the place would be hopping for a Saturday night.

We walked across the street to the Commercial Casino.  This place was pretty dead too.  I don't think they even had a cocktail waitress.  They did however, have the BEST video poker I've seen -- at least in terms of payouts.  I wound up playing a bit and netted a few dollars profit before leaving.

We also got a chance to see the world's largest stuffed polar bear, which is probably the casino's claim to fame: 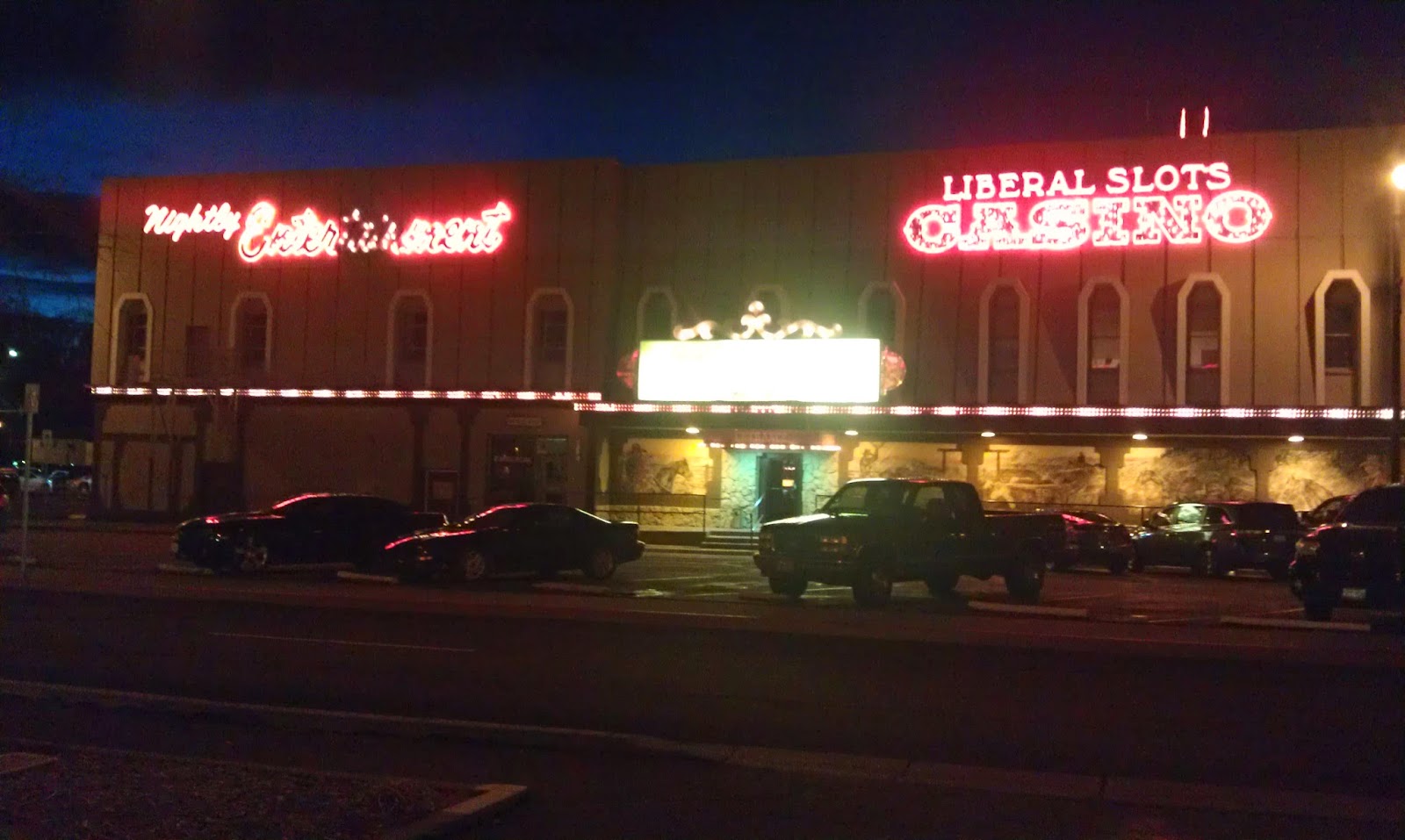 We wandered around the downtown area looking for something to eat.  We stopped into the famed Star Hotel and inquired about their dinner -- which is reputed to be the best in Elko.  However it was a 90 minute wait and Shari was starved.  Next time Star Hotel, next time.

We also checked out a few other restaurants that were rumored to be good only to find them closed.

Elko was having its winterfest and just about every citizen was downtown waiting for the parade.

We settled into the Blind Onion as a pizza sounded immensely good.  For about $20 they served us a decent pizza that gave us enough leftovers for a snack the next day.  It wasn't the world's best pizza but definitely not bad.  The place doesn't have much ambiance and it was kind of noisy but it did provide us with a quick and fairly inexpensive dinner. 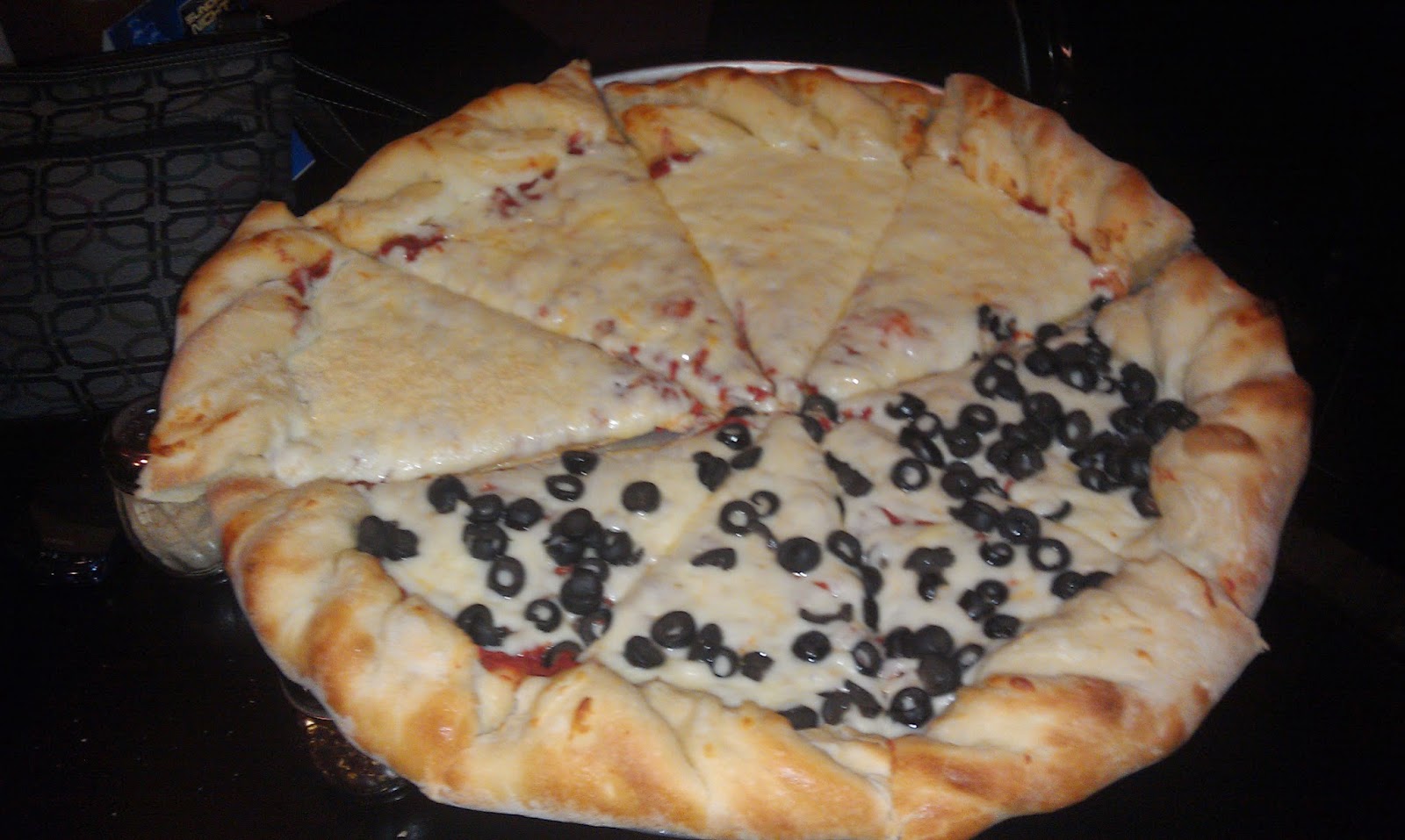 By the time we finished, the Winterfest parade was just ending.  I was sort of bummed about it.  I am not big on parades but since we were there I sort of wanted to see it.  I did manage to get a few shots of the parade as the last item went around the corner: 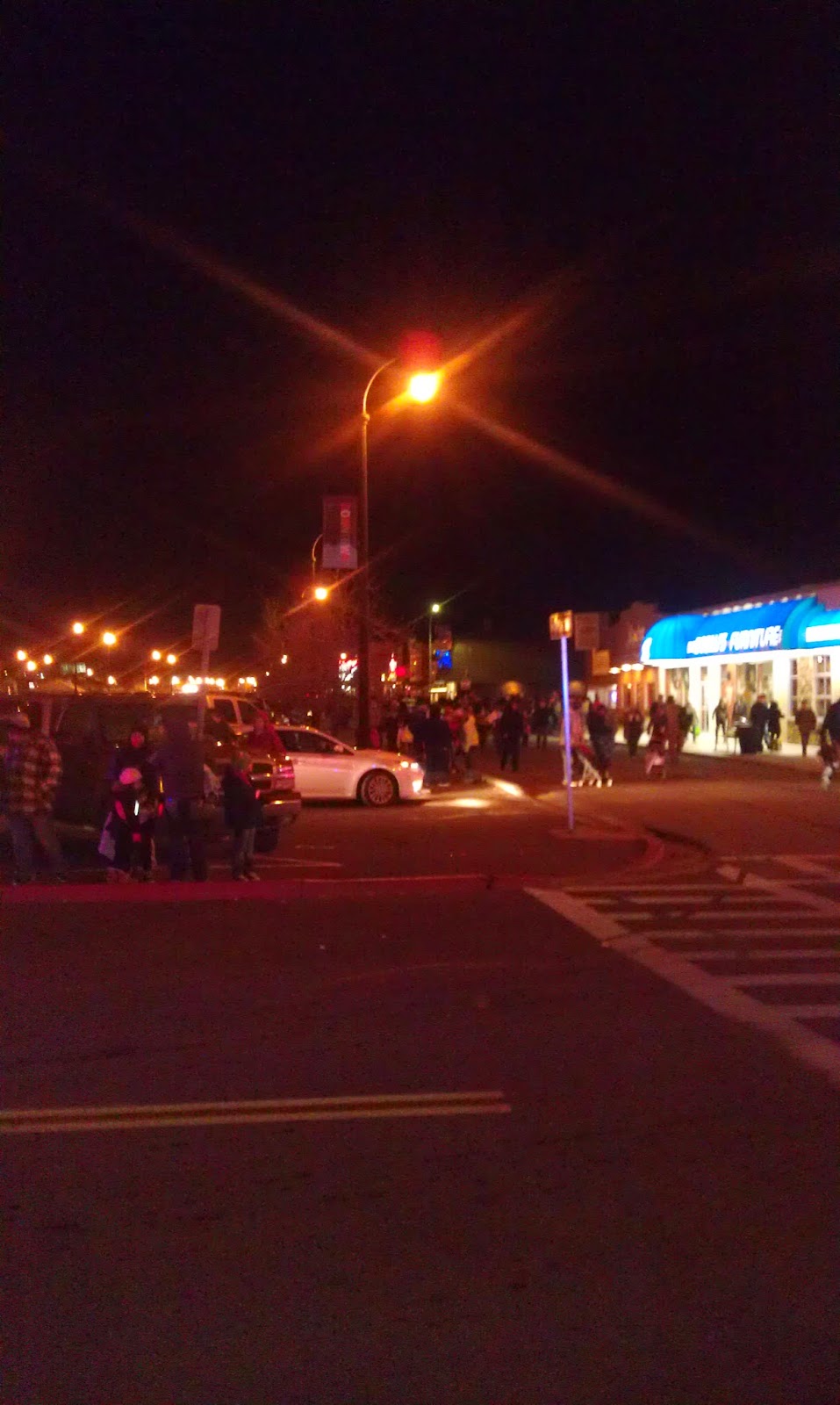 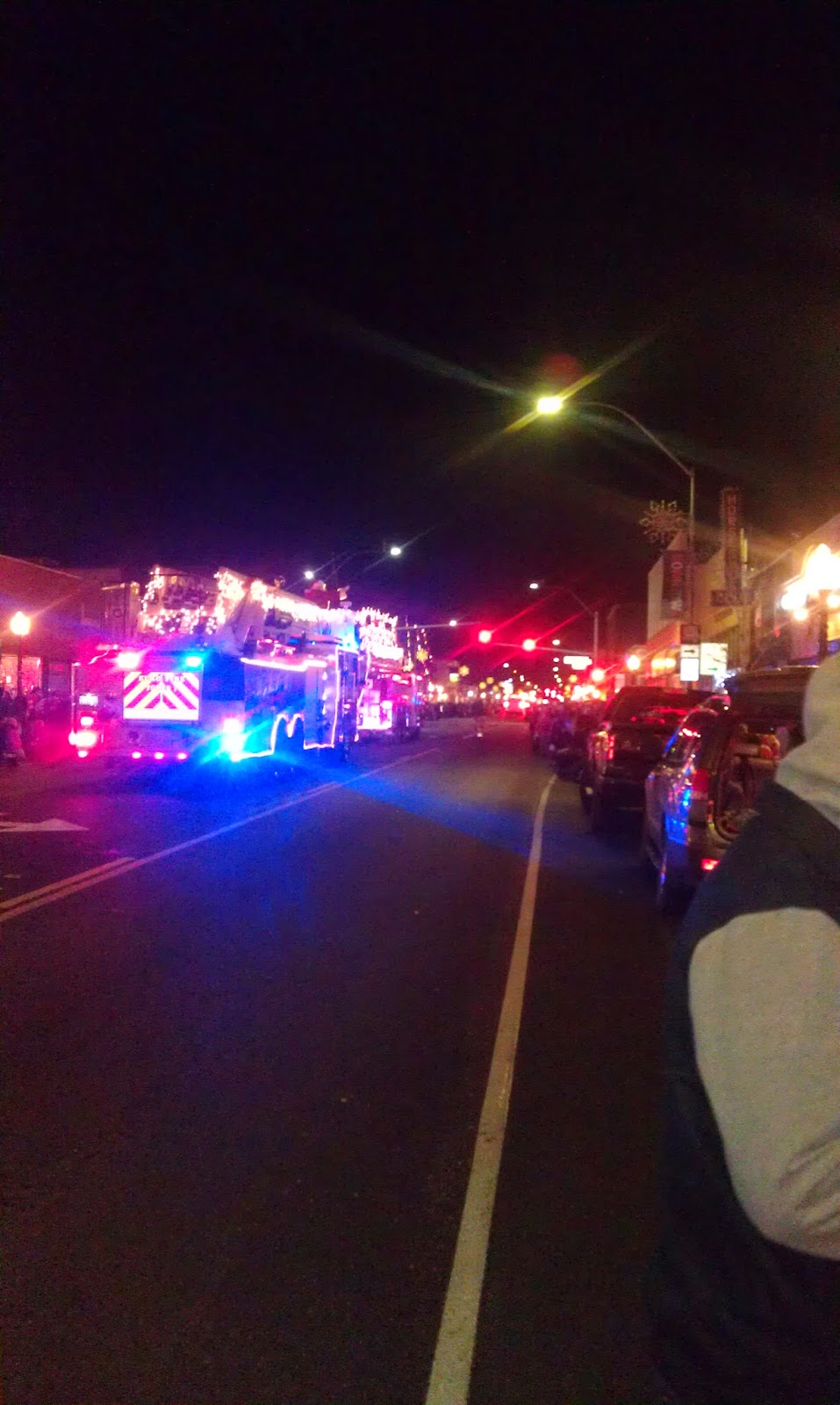 We wandered around and did some window shopping and went into various shops that were still open.  Once traffic died down (or as much as there is in Elko) we went back to the hotel.

We tried our hand once again in the casino and once again nothing but zero's.  We saw a lady win a $300 jackpot next to us, but clearly this wasn't our day.

The best thing to do in cases like this is just to go back to the room, hope for better luck the next day and watch TV.

I didn't sleep particularly well.  I didn't want to put the room into a deep freeze again as Shari gets cold but I wound up having too.  I just can't sleep in a warm room.  We also had some jacka$$ kick our door for about 8 seconds at 11pm that scared the snot out of both of us.  Never understood what happened there and it didn't happen again.

I woke up early and once again went out in pursuit of the perfect run.  It was cold, but you can read about my run here.

After cleaning up, we took off east towards Wendover.  Since we had a 50% off meal coupon and some free play and best of all the casinos had 7X comps, we were planning on getting breakfast there and trying our luck.

The ride there was very enjoyable.  I always forget how pretty of a drive it is from Elko to Wendover.  We had missed the beauty on Friday night on account it was dark.  I did manage to get a few pictures: 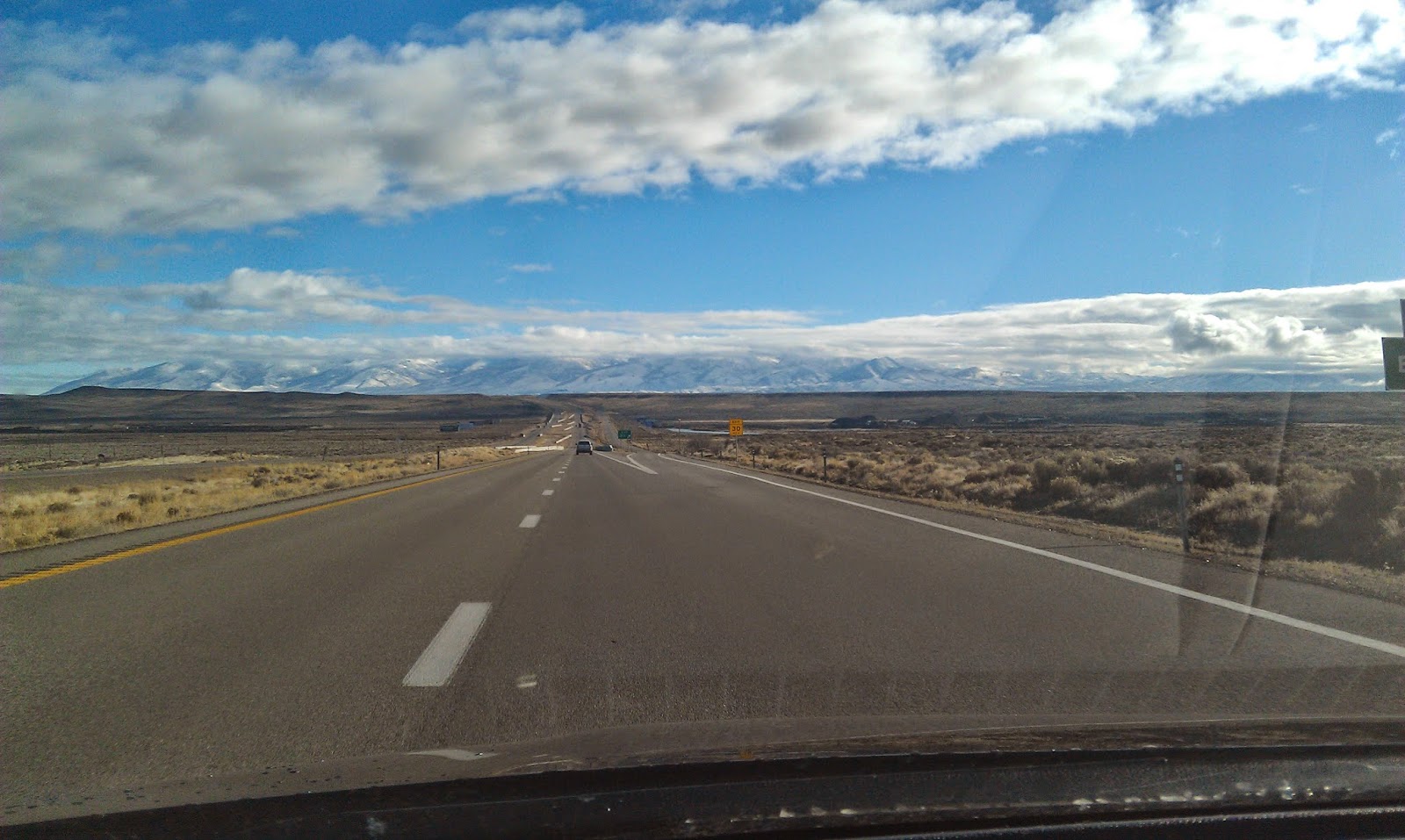 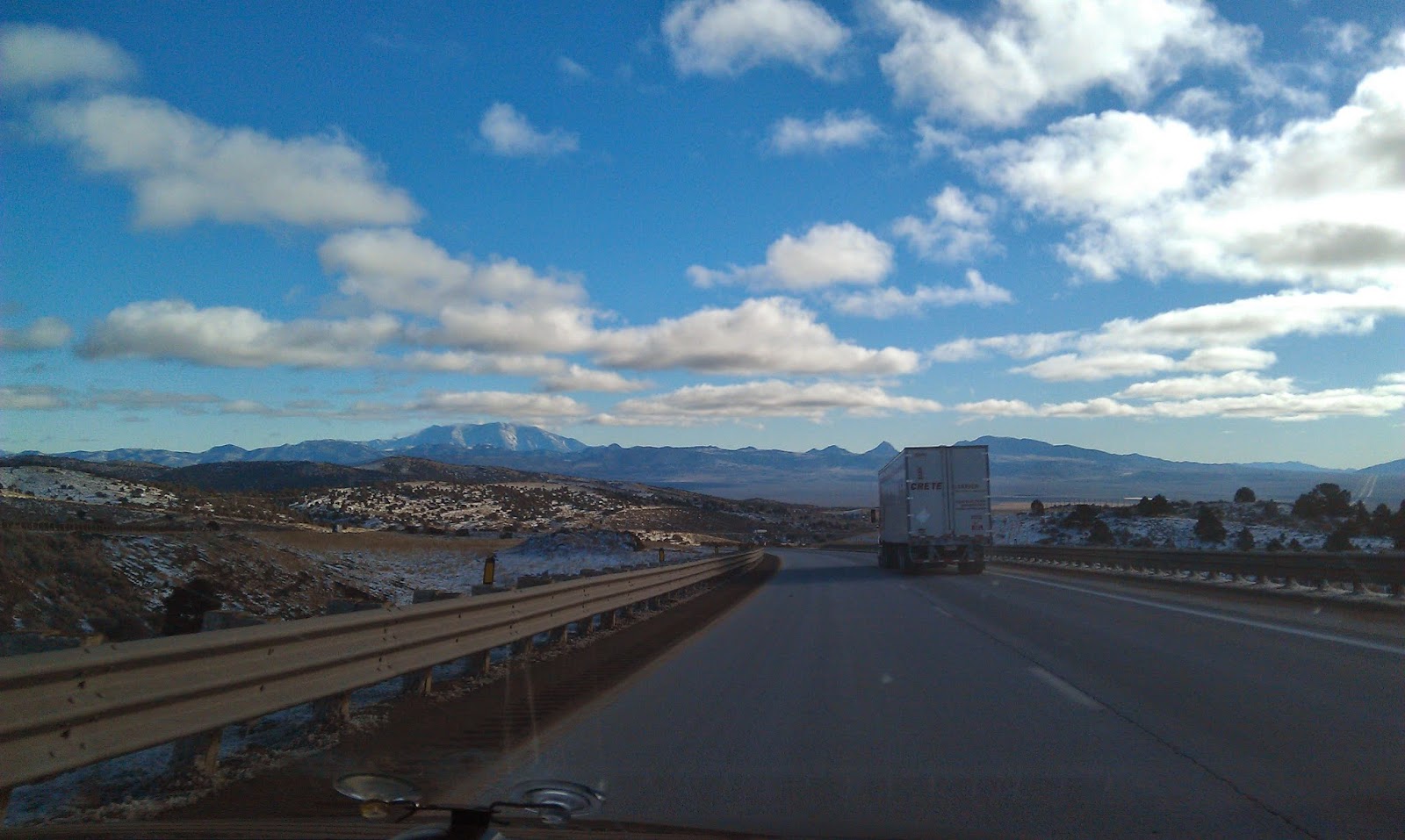 For $18 we both had a nice buffet.  Montego Bay just does it right.  I wound up eating way too much, but that was okay, since I hadn't spoiled myself that much all weekend.

Like I said before, Shari and I had zero luck throughout the trip and while I had a few glimmers of hope my luck remained bad.  I had figured it would change at some point, but no such luck.

We were betting pretty aggressively too, on account we knew we had limited time (we both sort of wanted to go home) and within 90 minutes between Montego Bay and Peppermill we were just "done".

The ride home was pretty uneventful, other than Nevada was bright and sunny and Salt Lake was gloomy, sort of like my mood after a bad gambling weekend.

However, I did get to see and experience a lot of new things.  And even though gambling wise it sucked (so much for small casinos being better) I did get the opportunity to explore a lot more of Elko.

I think I still want one more trip out there.  I want to explore Lamoille Canyon with the wildflowers coming up (mid to early June) and I'd like to run around / see the reservoir south of town.  There are also some marshes / birdlands in the Ruby Mountains that I'd like to experience too... so stay tuned.