On Saturday I decided to run the Layton half marathon.  Readers may recall that last year I did the full marathon and enjoyed it very much.  While the half marathon isn't that great of a course, it is a nice race and while I didn't get a chance to get on the island, I did get bussed out to the causeway that leads to the island.

This race didn't go well, almost from the minute I got there.  The race director had said he wanted everyone there no later than 6am, as the buses would leave at 6:00AM, not 6:01.  I was dutifully there at 5:30, picked up my shirt and jumped in line for a bus.  The problem is that the buses didn't arrive until 6:20.  Considering the bus ride to the start is about 20 minutes and people need to use the bathrooms once they arrive, this race was NOT going to start at 7AM.

It did start around 7:20 though, just as the lead marathoner passed us.  It is a bit humbling to be running and knowing that a guy that just blew by you has already put 13 in the books and will still beat you to the finish line.

I started off cautiously, hitting about 8:00 min / mile.  The sun was steadily creeping up and with the starting temperatures in the low to mid 70's, I knew this was going to be a hot one.  The course is flat, however in my opinion, it does get a little dull after leaving the causeway to Antelope Island.  It is treeless, shadeless, farm houses that eventually lead to the city of Layton (suburbia).

I hit the causeway right on target, ripping off 8:00 min / miles (and wound up holding that pace for about 6 miles).  Then it got really warm and I started getting some stomach aches.  I had conspicuously been passing gas but by mile 8 it was getting uncomfortable and I knew I would need to make a pit stop.  It wound up costing me two minutes but even that brief rest didn't help me out.

As the heat climbed my performance declined (when I finished it was 85).  I wound up shambling the last 3 miles or hitting roughly 10 minutes per mile.  I seriously started to question whether I'd really want to ever run again.  It was mentally probably some of the toughest miles I've ever done.

Either way, I did crawl through the finish line (almost literally) in 1:59, 6th in my age division.  This was the slowest half I've ever done (by a wide margin) and I really don't have an excuse.

It took me a while to recover after the race.  I just gulped down a lot of Powerade and the food they were offering didn't seem appealing (I even turned down free Fatboy icecreams!).  After an hour of sitting around (and hitting the porta-potty twice more) I did head on over to the Layton Golden Corral for my traditional feast...  Sadly this is a race I'd like to forget. 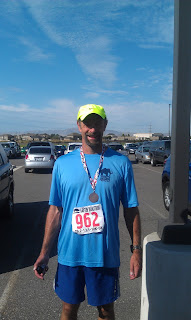 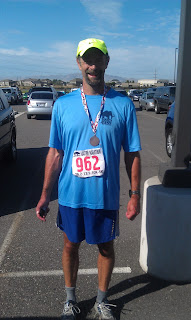 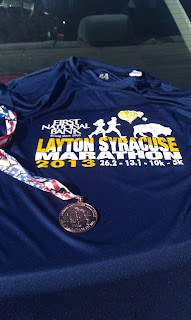 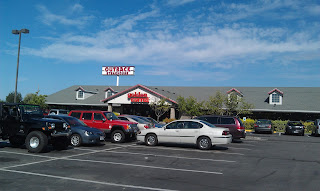