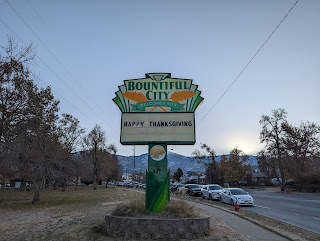 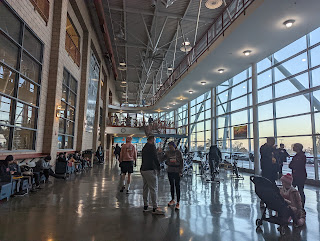 At some point when I first moved here, I found the South Davis Recreation Center's Turkey Trot run.  It is held every year on Thanksgiving up in Bountiful.  It is run by the recreation center and involves a 5K / 10K run.
It is a really nice bargain in a sea of races on one of the most popular racing days in the United States.
Every year I've elected to do the 5K.  I've run the course a bunch of times so I know it well.  In fact, this year I've run the 5K course 3 times.  It sets a good barometer as to where my fitness is 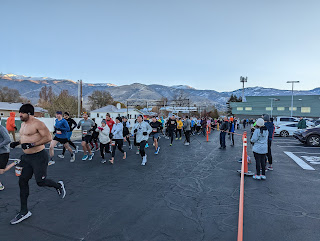 It was a chilly morning but fortunately no snow or ice.  There also wasn't any wind.  All perfect conditions.
I did a warm-up and jogged for a few minutes to loosen everything up.  Usually this race starts a little late, but today it started on time. 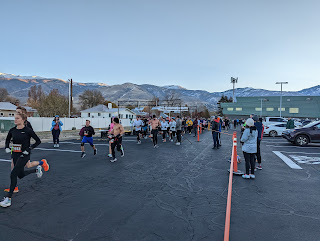 If you've read this blog before and read a race recap for this course, you'll know that it is a pretty basic course:  you start at the recreation center, head north for about 1.25 miles, hang a right, go east a bit and then come back.  You finish in the back parking lot of the recreation center.  It is all residential running for the most part, with the final mile being along the business corridor (traffic is much lighter in the morning along there).
The course is also a hard one to get right. The first mile is a gradual downhill (and a congested start) following by 2nd mile with a short hill and then the final mile is mostly a steady grind back to the finish.  There is more climb than descent according to my Garmin. 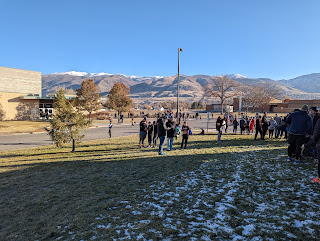 I had positioned myself well at the start and my goal in this race was to go sub 24 minutes. I knew it was going to be tough.  The course isn't really ideal for me to smash a PR with.  But I got off to a decent start and settled into a comfortable pace.
I couldn't read my watch (my eyesight isn't very good) due to the lighting but I was running comfortably hard.  Occasionally I'd put in a surge to drop runners I was working with.  I also didn't see anyone in my age group.
My Garmin alerted me I had run the first mile in 7:33.  Off to a decent start and I still felt largely in control of my pace.
From experience, I knew that once I left the main street I'd be greeted with the first hill.  My pace always hits a reality check here.  And sure enough I dialed it back a little.
I had a bit of a panic as other runners started to pass me and that spurred me a bit more.
I flew by the first water stop and glanced at my watch.  I was hurting but I was half way through the race.  By the time my Garmin rang mile 2, I was still running a sub 8-minute pace.  I felt like I was running faster but I knew the hardest mile was yet to come. 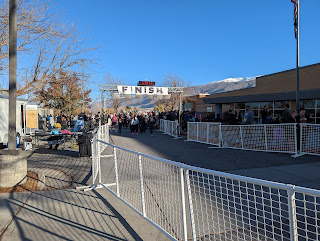 Mile 3 is a steady grind up hill.  I was being passed by the 10K runners, who had had a 30 minute head start.  Every now and then the effort would slow me up, but I was determine to power up this hill.  I worked on good posture and quick turnover.  My focus was reaching the top of the hill in good shape and then crushing the final quarter mile (or so) to the finish.
That final traffic light never seems to arrive but I knew it would.  I felt like I was running fast at times and other times I could feel the effects of the hill slowing me up.  It was also at this point a guy who looked to be my age wearing Vibram shoes slapped by me.  Darn it!
I knew I was redlining the final stretch and eventually I did summit the long grind of a hill. I hung the final two right turns and gave it all I could.  I knew it was going to be close -- seeing 23:15 on my watch. 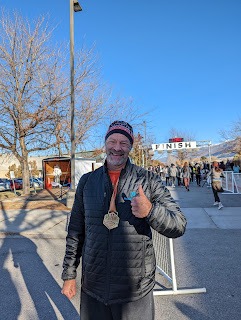 So, I didn't quite hit the time I was looking for.  I think I started my sprint a little too late and to be honest I was at max effort.  According to my Garmin I hit a 24:15.  All things considered, an okay time for this course.
I wound up placing 2nd in my age group.  I suspect the guy who passed me deep in fact beat me.  However, the times on this race were way off.  Initially, my time was reported as 24:46.  Later it was corrected to 24:39.  I am trying to get it corrected.  I've heard rumors that other people's times were "off".
This race offers a really nice spread of food -- especially for the price.  They had the usual drinks and muffins, bananas and even oatmeal. 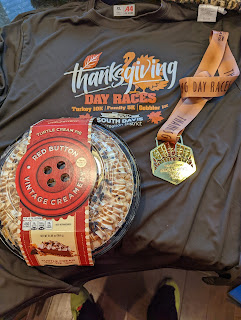 One of my favorite aspects to this race is that for your entry fee (about $25 with coupon code) you are eligible for some nice prizes (pies) and you do get a finisher's medal and a nice t-shirt.  I really like this year's design. 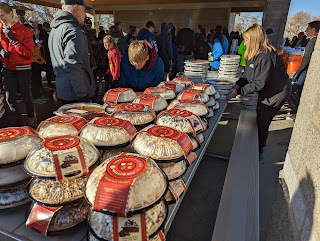 I didn't really hit the time I wanted to on this race but overall I had a positive experience.  I just hope the times / rankings are corrected.  With what appears to be everyone's times not being right, I have to question whether I did legitimately come in 2nd place.
I plan on running this course again in February!