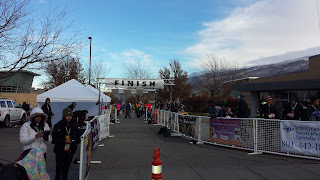 
Every year I make it a tradition to run the South Davis Recreation Center's 5K.  There are other races closer to me but I really enjoy this race.  They give you a really nice experience for a whopping $20 and is probably the best bargain there is when it comes to Thanksgiving races.  I also know the course like the back of my hand, having run it at least half a dozen times. 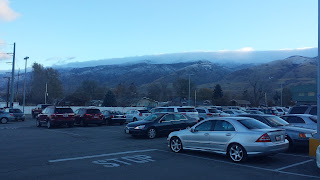 I didn't have too many expectations for this race.  I felt good but I knew it was going to be sort of tough on account there was a strong wind coming from the mountains to the east.  At times, throughout the course, it seemed to be in your face and at other times it was at your back.  Most of the time, though, it was blowing you to the side.

It was also pretty cold.  I wound up wearing shorts, a t-shirt and my wind breaker.  I sort of wished I had brought a hat but in my haste in leaving I had forgotten it.

I rolled in around 8 AM and got my shirt and swag bag.  As usual, it was pretty easy and it was filled with lots of goodies, including a nice tech shirt.

I wound up making small talk with people until 8:45.  I did a warmup and changed into my running gear.  I was in the chutes by 9AM.

Unfortunately the race didn't start until 9:10.  They are almost always late at this race for starts and whatever warm up I did was pretty much for naught.  By the time the race actually started my quads felt so stiff and it took a good quarter mile to loosen up.

My goal in this race was to coast the first mile and dig deep the subsequent miles.  Starting at about mile 1.25, the race goes uphill.  They aren't back breaking hills but it is a gentle rise.

When the wind was blowing in my face, I managed to tuck behind someone.  I still had a lot of power left for the final mile.  Normally I have to grind on this but I was actually passing people and for the first time I ran mile 3 the same as mile 2.  I probably should've pushed it a little harder in the middle miles.

I didn't really know what I was running despite my Garmin.  I was just really focused on running as fast as I could and not get too hung up on time. 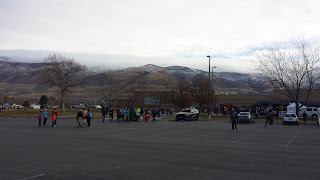 I crossed the finish line in 24:32.  I thought for sure I was going to break 24 as my pace seemed really solid.  Again, I had really been studying my pace throughout the race though other than peaking at mile 2 and mile 3 pace.

I was one of the first to finish (there were lots of kids and families running the 5K) and I had a chance to get my results.  Initially it said I was in fourth for my age group, which would've knocked me out of contention for a prize.  However, in the past, I've been burned before and if someone in my age group finished in the top 3, I would be bumped up.

It was a LONG wait -- over an hour before they posted the results on a wall and sure enough I had been pushed to 3rd place.  I had to wait a bit more, while huddled under a gas lamp with 30 other runners until they called my name to get my pie.  They really need to get awards handed out sooner.  Lots of people hadn't dressed for the elements (I had had time to go back to my car and get fresh clothes and a heavy jacket on). 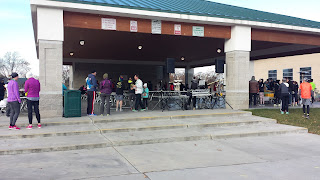 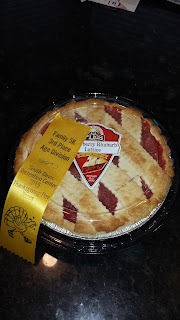 Other than the organizational snafus (a late start and lengthy wait for awards) this race is one I'll likely continue to do.  Again, for $20 it is a super nice 5K.  They had fruit, Gatorade and Corner Bakery came out and had muffins for everyone.  I really like the finisher's medal too... nice touch.

I am disappointed with my time -- as usual.  It isn't out of line considering my other 5K times of late and being I've done so little speed work.  Also, I think I held back a little too much at the start.  Looking at my previous results on the same course, I think I took it too easy.  I also have to account a bit for the strong winds.  Most people felt they hindered more than helped.

I am happy to finish in the money though and the pie should be the trouble I went through in waiting to get it.