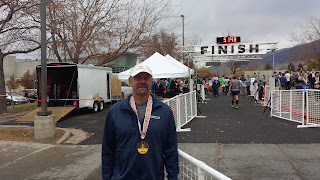 
Every year since I've been in Utah, I've done the South Davis Recreation Center's 5K race on Thanksgiving morning.  They hold a series of races throughout the year and they are usually very affordable and professionally run.  There are a ton of choices in the Salt Lake Area for Turkey Trots, and this one is one I will continue to do.

I've run this course a bunch of times.  They use it for the Valentine's Day run, their Handcart 5K and their half marathon in the summer finishes along the back end of it.  It is run along the city streets of Bountiful.  It isn't too scenic but the course really doesn't need to be.  It is a short and quick race. 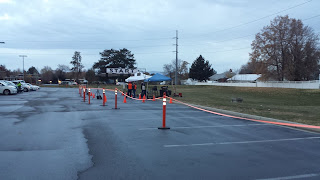 I rolled into the race about 45 minutes before the start.  Getting their early is always a smart thing because the parking lot fills up.  There's plenty of parking though but you can always spot the newbies as they scramble to find a spot to park. 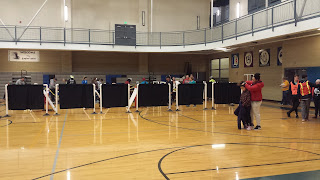 Packet pickup was located in the gym.  They have it down to an art form there and I had my bib, shirt, goodie bag and a validation that my chip was working in under a minute.  As usual, I got a nice shirt and cloth bag filled with promotional items. 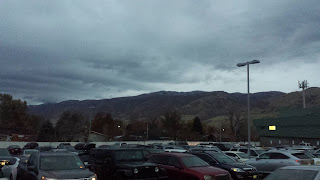 The forecast was for rain but other than some dampness on the ground it was smooth sailing.  In fact, as the morning progressed the weather got better.

I wound up stretching, using the restroom a few times and getting warmed up for the next 45 minutes.

A lot of people were really bundled up for the race.  I was in shorts, t-shirt, and throw away gloves (I hate cold hands).  I was perfectly happy with my setup.

One of my complaints in the past is that this race starts late.  Like 10 - 15 minutes late.  The last few times, though, they've started on time.  And this time -- they started on time.  Thank you!  I time my warm-ups, nutrition, etc down to the second on when the race starts. 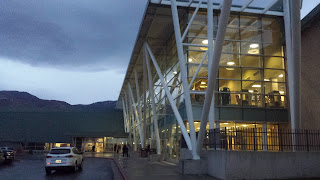 As usual, a lot of walkers / kids were in front but I only lost a few seconds overall I figure before jumping out onto the street.  I was quickly able to get up to speed.

The first mile or so is a delicious downhill.  It is really easy to get off to a good start and while I held back a little, I was pretty pleased to see the first mile go off at 7:45.

I was still feeling pretty good but I knew I had to stay strong as the race gets progressively harder.  After about 1.25 miles you turn on a side road.  There is a small hill here and it always seems to take the starch out of everyone's stride.  It isn't a bad hill, but it just looks steep.  This is usually where reality sets in for me.

I blew through the water stop and made another right to begin the journey to the back entrance of the recreation center.  This is another gut check because it is just a straight line for the next mile and you can see a distant street light at the top of a hill.  It is tough running here.

This is also a busy street but it is early in the morning and the course marshals did a great job of dealing with traffic.
I hit the 2 mile mark at 8:15.  I figured I was going a little slower so I was reasonably happy with that.

I kept working up the hill and while I wasn't in a death march, I was definitely hurting.  Before the race, another guy in my age division said he was going to be watching for me.  I saw him ahead and I really wanted to catch him.  I could see his knee high socks and brilliant orange shirt.  Every now and then I'd gain on him but I'd fatigue and he'd pull ahead (I think he wound up beating me by about 30 seconds).

I had done a lot of passing in the early miles but on mile 3 I was starting to get passed a bit.  I am a fast starter and I tend to fade at the end.  But it wasn't like millions of people were passing me, but those with a kick at the end were moving past me.

The nice thing about a 5K is that it is over pretty quick.  The final mile blew by and as I crested the hill, I really dug deep.  I wasn't going to set any personal records, but I certainly wanted the best time I could possibly get.

I hauled it to the finish and saw the clock starting to hit 25 minutes.  A good time for me these days is under 25 minutes and for a minute I was bummed.  Then I looked at my Garmin and realized that I had about a 10 second cushion as that is how long it took me to cross the starting line. 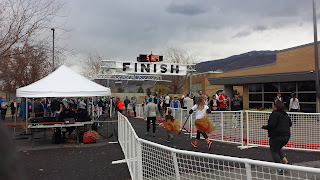 As stated above, I was pretty happy with my time.  And it turns out I came in 2nd in my age group.

I didn't have a lot planned for the day but I sort of didn't want to hang around for awards.  I wound up socializing and the time went by quickly enough.  By the time I was starting to think about leaving they started up with the awards.  They were quick about announcing them this year and I managed to snag a cherry pie for my hard work. 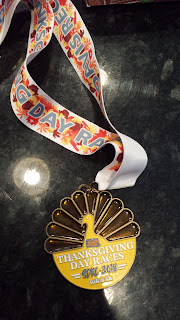 For the $25 I spent for this race, I got a fully supported race, a nice shirt, finisher's medal, swag bag, and post race refreshments (your standard post race fare).  I also got to see a bunch of friends too so it was just a nice way to spend Thanksgiving morning.

I plan on being there next year.... and this was a nice race to tie in with Thanksgiving. 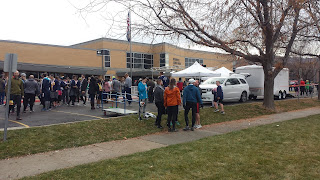