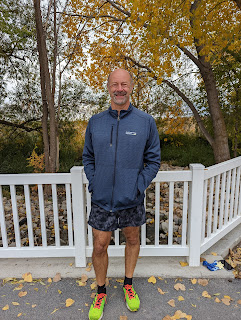 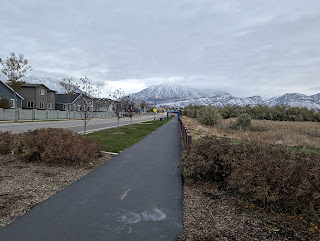 How can I resist the siren's call of a $15 5K?  Yes that is what convinced me to return to the Vineyard (City) Blizzard 5K.
I ran this race last year and it was the same bargain basement price.  You don't get a t-shirt but you get a well organized event in the bedroom community of Vineyard.
This year they added a 10K race but I was more interested in keeping the volume low and I've been focusing on the 5K race for a bit now. 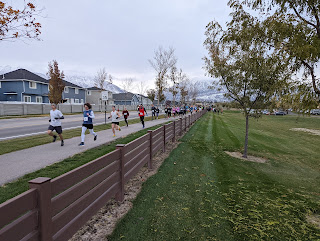 I made the 30 minute drive to Vineyard in short order.  This community is nestled along the shores of Utah Lake and most people don't even know it exists.  It is a residential community and new, so they've done a pretty good job packing in the houses, yet building in hiking / running trails and making the most of the natural beauty of Utah Lake.
I quickly grabbed my bib for this smallish race -- they had about 200 people total.
I got some pictures of the 10K runners, who headed off at 8:15.  My 5K race started at 8:30.  I had a feeling that some of the 10K runners would swallow me up in the final mile or so for my race -- as humbling as that would be.
After having done a bit of a shakeout run and some dynamic stretches, I deemed myself ready to run.  Although, while I was at the starting line, I felt like I should've done a longer warm out.  It was chilly and I didn't feel quite ready. 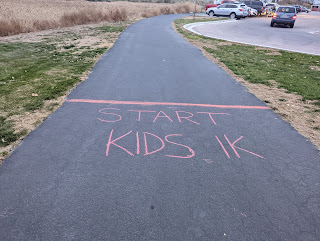 The race is run on the streets of Vineyard and mostly on sidewalk or street.  It isn't a super exciting course, but it is flat, well marshalled and supported.  I had lined up fairly close to the start but I was quickly humbled by the sheer number of people who initially passed me.
This race is mostly attended by locals and there were plenty of kids and young adults.  I figured I'd catch some of the younger folks who blasted out too quickly.  I was eyeballing other people that I was guessing were in my age group and trying to monitor their progress.  With a 10 year age group, I didn't want to have a medal-less day. 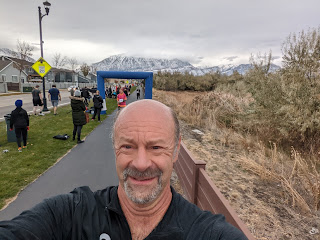 The first mile was right on target - 7:51.  Nothing out of the ordinary.  I was beginning to wonder though if the wheels were going to come off.  I just wasn't feeling super strong.
But every time I felt like coasting, I'd spy someone ahead that was definitely masters age level. 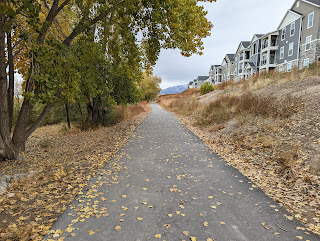 About midway through mile 2, the lead back of 10K runners flew by me.  Here I am running hard and they fly by me -- probably at 90 to 120 seconds faster than I am.
Mile 2 hit at 7:59.  The way I was feeling though I suspect mile 3 was going to be even slower.
I think after all the 5K racing I've done, I have a lot of mental strength and I started to do math. I had a shot at going sub 24 minutes.  I knew the course was legit and I felt like I still had a lot to give.  While I didn't feel like anyone was tacking me down, I did have runners ahead of me to work off of.  Plus another masters runner was within shouting distance. 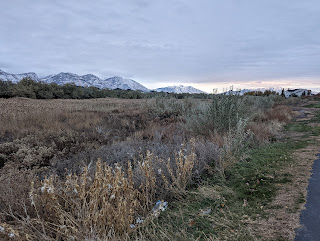 Throughout the race I was recalling last year's race.  So I knew exactly where I was and how much further I had to run.  This was a huge confidence boost in that I wasn't worried about encountering some hill or unexpected turn of events.
I kept pushing and doing math.  Could I break 24 minutes?  I was making ground against the master's runner ahead of me and I thought I'd be able to sprint past him in the final tenth of a mile.  I don't think he realized I was behind him but he turned on the jets too and there just wasn't anything I could do.
I had given it all in the final quarter mile and I crossed the finish line in 24:05.  So close. 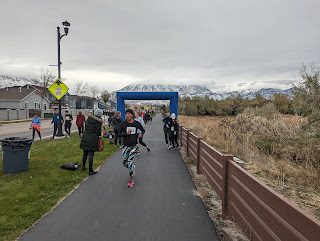 So this race measured in at 3.05 miles.  Last year I ran the same course in 3.10 miles.  I'd like to count this as a legitimate race.  And I did run about 25 seconds faster than last year.
I also won my age group.  So I came home with a medal and folding picnic type of chair.  They had plenty of post race refreshments.  Bananas, granola bars and various other snacks.  They also had a pretty nice swag bag including a coupon for a Dairy Queen (hence the Blizzard tie-in). 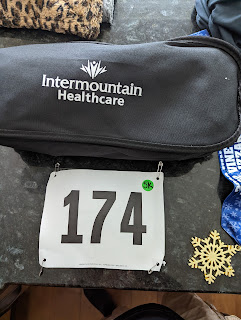 Overall, this race continues to be one of the best bargains of the year.  Granted, I didn't get a t-shirt but I got a well supported, officially timed race and just a beautiful morning for a run.  The race organizers definitely know what they are doing and I was very happy I went.
I plan on signing up next year and I want to try the 10K.  It runs along Utah Lake and looks like a more scenic course.