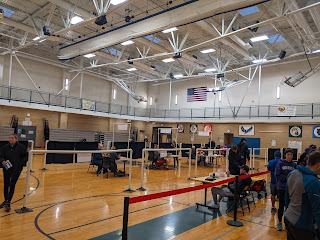 As usual, I signed up for my annual Turkey Trot for Thanksgiving Day.  Leading up to this race I've done 2 other Turkey Trots, but they were held in advance of probably the biggest running holiday in the United States.
I had a ton of choices -- mostly 5Ks but there was a big half marathon.  And judging from what I've seen, most of the races had massive turnouts.
I've done this race pretty much since I've moved to Northern Utah (2012).  It is affordable, they give you a lot for your money and in general it is a well run race.  Plus it doesn't hurt to know the course.

Normally the race starts at 8 AM and both the 5K and 10K runners start at the same time.  This year, due to the large turnout, they started the 10K runners at 8 AM and the 5K runners at 8:30.  I got there early enough to snag a decent parking spot, grab my bib and do my warm-up and catch the 10K runners as they ran by me.
It was a chilly morning -- about 28F according to my car and my hands were frozen during my warm-up.  I was wishing that I had brought my thicker gloves.
The race started a hair after 8:30 and went with thin gloves, long-sleeved shirt and shorts.  I also threw on a skull cap hat.  I felt like I had chosen correctly for this race.  As usual, for a windless 5K you warm-up pretty fast. 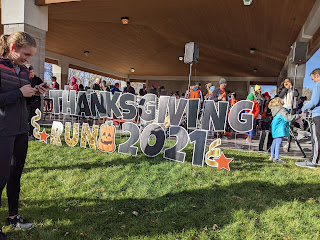 The race wasn't staggered and it was a free for all from the get go.  It was a madhouse initially.  Lots of people had lined up at the front of the race when they should've be in the back.  It probably cost me 5 to 10 seconds, but not the end of the world.  I got off to a good start and I settled into what I felt was a conservative mile.
The race is held on the city streets of Bountiful.  They have a police and volunteers monitoring the major intersections but typically on race day morning there isn't much traffic.  The first mile is along a residential street sporting a mix of old and new houses.  It is also the fastest mile of the course -- with a net downhill of about 40 feet. 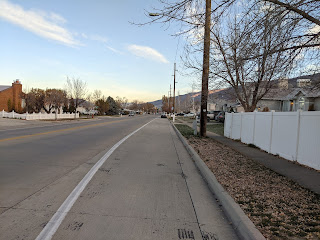 I wasn't too surprised hitting a sub 7:30 mile.  I just wish the rest of the race felt that easy.
I've run this course at least a dozen times over the years and I was thrown for a curveball when I saw we made the right hand turn prematurely.  Had the race organizers screwed up?
Turns out there was a bit of road construction that made our usual route not runnable.  So off we darted into a new subdivision.
It was also at this point that I realized that I was running a new course (technically).  And judging from the direction we were running, that the course was likely to be longer than usual.  Prior to this, I had visions of using this race as a time trial to see where I was earlier this spring.  Not any more.
Mile 1 to 2 is slightly uphill.  I was still surging in sports and working to keep up with the people around  me -- some of whom I figured might be in my age group.  I had gotten off to a good start and I was shooting from something in the 23's or at the least low 24's.
Mile 2 flashed on my watch with a 7:59.  Still pretty good, but the most challenging mile lay ahead. 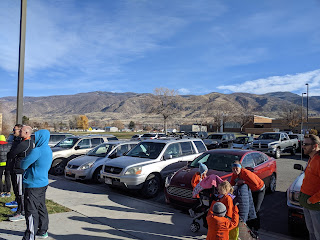 The last mile is a grind back to the recreation center.  It starts off slow and then culminates at about mile 2.66 or so.  At this point you are gassed and you can kind of smell the finish line.  You could call this hill Heartbreak Hill for this race.
I worked on keeping my form up and occasionally I'd throw in a surge to pass by a few people, but this part of the race always kills my overall time.  I saw my 7:45 - 8:10 pace drift into the 8:30s.
Finally, I reached the top of the hill and I knew the finish line was just a few minutes ahead.  I had been working off of some people and we had been dueling for position.  I finally was able to put some distance on them and I felt like my legs had another surge of energy.  My legs were turning over and I was able to pass a few runners who had gotten beat up by the hills. 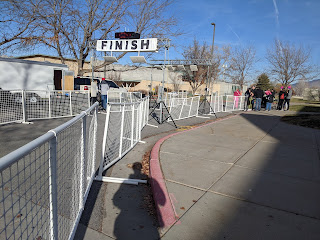 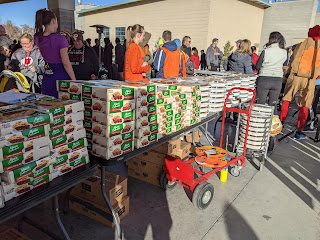 I congratulated those around me and grabbed my pretty big 5K finisher's medal.  I had stashed my warm-up jacket near the starting so, so I had to make about a quarter mile jog to pick it up (which hurt).  I socialized a bit before retrieving my phone to check the results.
I didn't think I would place in my age division.  I had a sneaking suspicion that there were plenty of guys in my age group that had beaten me.  They had signs up with QR codes to access the results.  I was actually pretty stunned to see that I had placed 2nd in my age group.  Score for me! 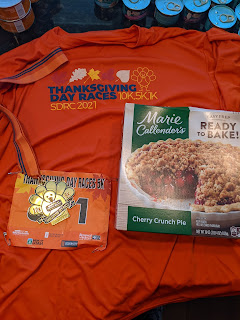 Prizes included pies for age group winners and turkeys / hams for overall winners.  Post race refreshments included pastries, bananas, oranges and water / sports drink.  For $20 I got a great race experience and as usual, the race organizers give you plenty for your money.  My only gripe is that it took a LONG time to give out the awards.  If I hadn't won anything I could've hit the road by 9:15.  Instead, the awards didn't get delivered until after 10.  Too long, especially on a cold day.
Overall, I was happy with my experience.  I especially liked the medal and everything was done well.  I raced pretty much exactly where my fitness is these days.  It certainly wasn't a breakout race but it wasn't a disaster either.  Hopefully next time I run this course it'll be the way it was and I can gauge if I am progressing at all.
Baring any setbacks, I'll be running this course again in the future.