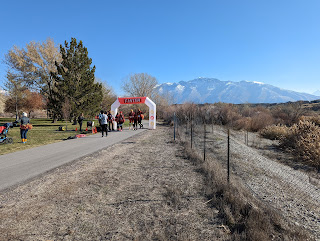 Last year I did in the inaugural South Jordan Turkey Trot 10K.  It is a locally produced event a few miles down the road.  It is kind of a fun run -- it's cheap, you get a t-shirt and no medal.  They also only award prizes to the top overall finishers.
Generally I don't do races that don't offer a chance of me winning something.  But I wanted a training run and this was reasonably priced.  Plus all the cool kids were going to be there.
I've done the course twice before and it is mostly flat. It is run along the Jordan River Bike Trail and eventually dips into a hilly subdivision in South Jordan.  There is also a large hill at about mile 4.5 that always steals your dreams of a great race.
My goal today was to try and run sub 49 minutes.  I had run the course in 49;4X and 49:5x.  I've been training pretty well and could see myself doing quite well. 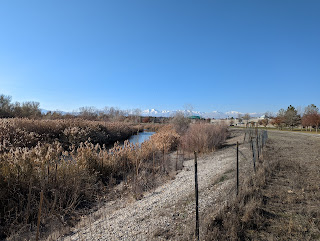 The race started at 10 AM.  I had had breakfast about 3 hours before -- oatmeal with fruit.  And it really hadn't quite settled yet as I toed the line.

It was chilly and I had done a solid warm-up to get ready for the race.  I was wearing short-shorts, thin gloves and 2 t-shirts.  A lot of people were wearing tights and I felt I was one of the under dressed ones.
The race started and off we went south on the bike trail.  There were about 100 10K runners.  There were more running the 5K, however and there was a kid's race to follow.
My goal was to run low 8 minute miles and try to smash the final 2 miles or so.
I wound up running the first few miles with a group of runners.  I had company for most of the race and it was great working with other runners.
The first mile rattled off at 8:03.  Solid, and right on target.  I felt really in control of my pace.  It felt hard but not all out.  Exactly where I wanted it to be.
Despite my Garmin saying there was little wind, it seemed like throughout the race I was constantly running into the wind.  It wasn't strong but any means but I didn't feel like I ever got any benefit from it. 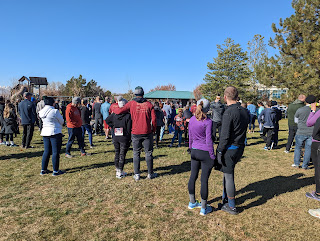 As I sped along the bike trail, I recalled a bunch of races I had done along that particular stretch of bike
trail.  The Riverton half marathon, Sound of Hope and a bunch of other races over the years.

Mile 2 run up in 8:05.  Still right where I wanted to be, but part of me was wondering if I had it today.  I was hurting but definitely not dying or on my last gasp.  My breathing was okay and I felt I could continue to hold the pace until the end of the race.
The bike trail was so pretty. I was wearing sunglasses as the sun was really bright.  We sped by a tree planting group before exiting the bike trail and entering a well-to-do-neighborhood.  It was at this point I hit a 8:03.  Consistent!
I let off the accelerator a bit as I knew a hill was coming up.  I think I had anticipated it too soon though.  I kept thinking it was around the corner but it was a while before it came into view.
It was also at this point that we were running with some of the 5K runners. Most of them were walkers or slower runners.  They too had to climb the dreaded South Jordan Hill.  I just focused on maintaining good form and getting up the hill.  No need to bust up it but just cover the distance.
I felt my pace quicken upon getting to the top and I wasn't too surprised to see my Garmin report that I had run an 8:57 mile.  Totally expected.
There was another small-ish hill or two, but now I was more into race mode.  It was delightful to smash the hill on the way down but I really didn't get the benefit I was hoping for out of it.  Also the 5K runners had disappeared and I was simply chasing the next runner ahead of me and trying to gain some ground on the runners behind me.  I had been trading places with a few runners and even though I was completely out of medal contention, my pride was on the line.
Mile 5 saw an 8:06.  Not exactly what I was hoping for to be honest.  And I think at this point I had to stop and ask for directions.  I knew not to follow the 5K runners onto the bike trail but I had about a quarter mile south to run before taking a little alley before returning to the bike trail.
In reviewing some of the times I think some people either ran too far or returned with the 5K runners.  This resulted in distances of about 5.50 miles versus the 6.06 I ran.  The course just wasn't well marked for that tiny portion.
I hit it as hard as I could on the final mile.  I knew how much further I needed to go and I wanted to secure my placement.
I ran into quite a few of the kids racers but it didn't hinder me.  Also I hit the only water station on the course (not that I needed it at any point).
I cruised through the final mile in 8:00 minutes.  Unfortunately I was passed by two runners in the final stretch.  Where they came from, I am not sure. 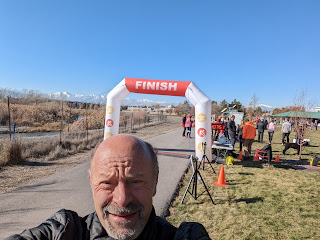 So I didn't hit my A goal.  At first I was disappointed because I thought I had run slower than last year.  I quick look at my blog though revealed that I indeed had run a little faster than last year.  Progress!
I had expected a little better time though.  My training has been rock solid.  It just wasn't there.  Perhaps I was afraid to go a little faster on account that breakfast clearly hadn't settled all that well.
Still, in reviewing my splits, I was largely evenly paced.  That is something that I haven't done particularly well with in the past.  Usually I start out smoking hot and then tail off near the end.
The race was in the low twenty dollar range.  I got a timed race and a t-shirt.  Post race refreshments included water.  It was a pretty simple affair to be honest.  They did have a raffle as well.
This was a nice race and other than the final 5K / 10K split, it was well done and organized.  I'd do this race again if it fit into my calendar.  It was close by and something to keep me motivated.