So for a Black Friday sale last year, I wound up signing up for the Haunted Half 5K race in Provo Utah for about $20.  Normally the race runs around $40 or more so it was quite a bargain.
I've done the race twice before -- the half marathon years ago and the 5K last year.  The half marathon involves a bus ride to the start and then a lengthy (and often chilly) wait for the race to begin.  So the 5K tends to keep things simpler.
Once again, this year was a new race course.  The gist of it was that you'd park at a corporate center where the finish line was, walk (or warm-up) to the school where the starting line was.  The deal was, the school was about half a mile from the finish line.
To make things even more interesting, I was under the false impression that the race started at 8 AM.  So when I arrived at the school there was hardly anyone there and the starting line wasn't even setup.  Oops.

So after making a few trips from the parking area to the school (for a bathroom break) I was thoroughly warmed up.  In fact, I made a 3 trips -- each at about half a mile.  Normally I warm up less than half a mile for a 5K.  And as I toed the line at 8:30 waiting for the race to start, I began to question whether I had worn myself out -- after all I had had a fairly sluggish week of training leading in to the race.
The race started at 8:30 and were headed south.  The race was chip timed from start to finish and I had lined up fairly close to the start but I was respectful of the other runners.  The first few hundred yards were congested but by the time we made our first turn, I was free to run the pace I wanted to.
Initially there was a bit of wind to contend with but there was enough cover to duck behind people.  It was a mild nuisance but I don't really recall it being a major factor in the race.
As I got into the first mile I began sizing up the competition.  While waiting I had spied a few other people who I thought might be in my age group.  My goal was to hang with them and keep them in my sights, but still run my race.
As we wound our way through the first mile, I immediately recognized where I was.  I knew at some point we were going to run on the Murdock bike trail where I had run the PC2PG race in August.  Sure enough, just as I hit mile 1, I jumped onto the bike trail and I was suddenly in familiar territory.  I was pretty happy with my sub 8 minute mile, but I knew I'd have to hit it a bit harder.
The next mile was on the bike trail and I knew exactly where we were and what to expect.  It gave me a lot of confidence as I knew I didn't have to hold back much out of fear there was some sort of hill.
I expected a faster mile after the first mile but still hit a 7:52, only slightly faster than the first mile.  But I had made ground against some of my supposed opponents who I presumed were in my age group. I was hurting but still holding my own.  I also knew that after mile 2 that I was going to get a bit of a downhill. 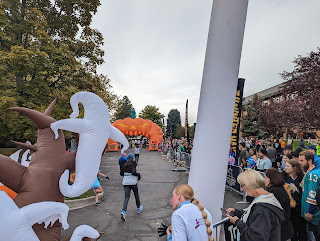 Despite a lackluster week of training and running on pretty fatigued legs, I was still having what I would consider a good race.
Sure enough after exiting the bike trail we jumped into a residential area that had a significant downhill.  It wasn't massive, but it was enough to give me a boost.  I could coast -- just a little bit -- and let gravity assist with the running.
It was at this point that I passed my would-be competitor. Now I just had to keep that lead.
I had studied the course briefly before the race and by the organizer's own measurements, the course was going to come in at 3.17.  I think I had even measured it using MapMyRun.  So my presumption was that I had better save a little bit of energy for that final push and that I'd be running quite a bit further than the standard 3.11 miles. 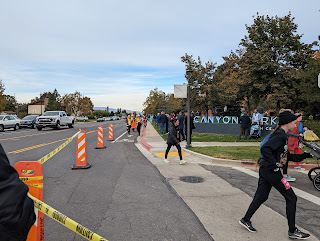 So in that last half mile or so, I did dial it back.  While I was tired and at the end of my limit for the 5K, mentally I wrote the race off as "not legit" or "I'd have to correct my time to what I think I would've run".  So in short, I sold myself short.
The race had thinned out at this point but there wasn't anyone in my age group within shouting distance.  Finally, I saw where people were making a left turn into the finish line's corporate center.  I glanced at my watch.  I was still well under 3 miles.  Could this course be actually short?
I made the turn and heard the roaring crowd.  This was a family event and there were plenty of spectators in the final stretch to cheer me on.  I cruised through a darkened tunnel, made another left turn and blasted through the finish line.

So the course came in at 3.06 miles.  A lot of other runners got this exact distance as well.  Measuring it once again with MapMyRun I came up with 3.16.  My time is typical for a 5K 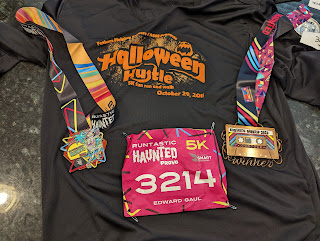 I wound up finishing 3rd in my age group.  I was thrilled to get a medal . The race was kind of a haunted 80's theme so the award was actually medal of a cassette tape.  The finishers medal was akin to the one I got at last week's race.  The shirt was also identical.  I wound up wearing a shirt from 2011 from the Haunted Hustle in Palatine IL Turns out that 11 years ago to the day I ran that race.
They had plenty of snacks and drink after the race: donuts, oranges, bananas, chocolate milk, water, orange juice, etc.  Runtastic Events definitely knows how to put on a party.  The finish line was also an epic Halloween festival and I think people really enjoyed it.
I had signed up for the race on a Black Friday deal, so I had gotten a very nice price (less than $25).  I was happy with my experience but was a little disappointed that there were no bathrooms at the actual 5K starting line. I am partially to blame for this since I got to the starting line WAY early.
I was pretty happy with my time all things considered.  My splits were even and while I was hurting at the end, I was still pushing hard.
I plan to do this race next year.  It was fun and I knew a lot of people there.  It was a large, family event but still gave me the opportunity to keep and run hard.