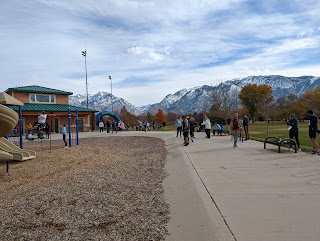 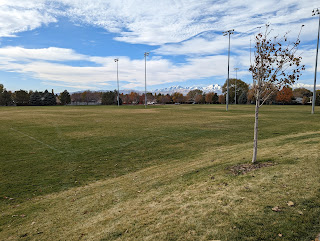 Since I've moved to the Salt Lake Area back in 2012, I've always targeted the Sandy City 5K Turkey Trot.  There is no shortage of races for the American holiday and Sandy City is pretty smart in organizing their race about 2 weeks before the big day.
From about 2015 on, the race always conflicted with the Las Vegas marathon, so I was usually unable to do this race.  Since the Las Vegas race has been moved to February, it now gives me a chance to do this race.
It is a local race - about 10 minutes from where I live and put on by the recreation center.  They do a series of races throughout the year and they are generally well organized community events. 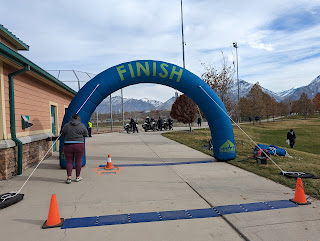 The race is held each year at Lone Peak Park.  Pretty much every year that I have attended this race, the course has been different.  But more or less it starts with at the same place.
The park is popular and sports a large open field.  It is also the gateway to Dimple Dell park -- a hidden gem in Sandy that offers lots of running trails.
I got there about 9:15 AM for the 10 AM start, easily got my bib and did about a mile of warm-ups.  It was chilly -- in the low 30'sF but I had a long-sleeved t-shirt, thin gloves, and short shorts.  I was feeling pretty good as I did my warm-up.  I did feel a bit apprehensive about this race.  It is a little hilly and I've never run particularly well.
The race started at 10 AM -- for a community recreation center run -- they are organized.  I had lined up about 50 people from the start and it was pretty congested at the start.  It probably set me back 10 seconds or so as I navigated my way along the paved bike trail walk way.
Finally after a quarter of mile, we jumped into a residential section and it opened up.  The first mile or so has been consistent over the years.  However, once we get to the bike trail, things start to get different.
The first mile is also the most fun.  You are fresh and there is a bit of a downhill.  As I ran down towards the bike trail it felt gloriously easy and I figured I was going to have a good race.  I hit the first mile in 7:30 despite the initial congestion.
I felt like I was doing pretty well as I hit the flat section of the Porter Rockwell bike trail. I definitely remember this section from the time I did the race in 2014.  I also remember making these tiny little circles around the perimeters of some small parks.

About half way through the race, I ran into the lead pack.  I started to get an estimate of who my compotation was.  As I expected, it was mostly high school studs leading the way in their singlets and ultra-short-shorts.  I really didn't see anyone that looked to  be my age.  Could it be that this year I'd win my age group?
I was still running pretty strong and occasionally used some surges to push back people I ran into.  I was breathing hard but still had enough to push to the finish of the race.  The second mile hit at 7:45.  Despite only having marginal downhills I was really happy with this split, but I also knew the final mile was uphill and going to cost me.
As I exited the bike trail I felt like I was still running pretty strong.  I really didn't have the energy to even look at my watch.  I was so focused on powering up the hills.  The neighborhood hills aren't massive but they are enough to slow you down a bit.
I was running with a few other people.  They clearly weren't in my age group and I was able to pass some and get passed by others.  I did manage to glance at my watch continuing to check how much further I had to run.  Would the course be long this year?  Or short?  And how badly would I pay the price for the hills?

Finally we came back into the park and I had to make about a quarter mile run around the perimeter of the park before crossing the finish line.  I had glanced at my Garmin at the start of the race so I knew how much long I had to run.
I still felt strong and felt like my pace was solid, but my watch was reading 8:15's - 8:20's.  Definitely not where I wanted to be.  It was also painful to see the finish line on the other side of the park.  I could just so easily run across the park and save myself a lot of time rather than running the big loop.
Mile 3 saw an 8:05.  Not bad all things considered but I was hoping to hold sub 8.
At that point I turned on the gas and really pushed as hard as I could in the final tenth of a mile.  Could I break 24 minutes?  Would I win my age group? 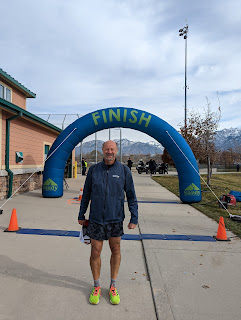 So I crossed the finish line -- with a sub 7 minute mile pace in 24:10.  I glanced at my watch and the course measured 3.12 miles.  I probably did break 24 minutes for a legit 5K. I did look at Strava afterwards and most people got anywhere between 3.10 miles and 3.14.  I am thinking that the course was simply 5K.
All things considered, though I ran really.  In all the editions of this race, I've run about 24:45.  This year, I was quite a bit faster/
I wound up rebounding right away and made it to my car to get warmer clothes.  I shuffled back to figure out where I had placed and they were having timing problems with getting the results to the runners.  I wound up socializing for a bit before seeing that I finished 4th in my age group.  No medal for me today.  I had missed 3rd by about 25 seconds.  The first two in my age group were in the 20's and 21's.  For finishing 29th overall, my age group was stacked.
But I was still really happy with my time.  While I didn't have the breakout race I was hoping for, I did run well given the conditions and the course.
Post race refreshments were pretty limited.  Granola bars and gummy fruits.  They had bottled water but I had brought my own Gatorade for after the race.
I paid about $25 for the race.  The shirt was cute and I'll probably wear it for bumming around the house or simple short runs, but it is simply a cotton one./ I do have to say their t-shirt designer always does a great job with the t-shirt designs.  Just wish they had polyester ones. 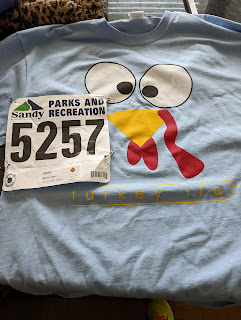 I got pretty good value for the money I spent and it was a nice community event.  The course felt fast in some spots and in others, not so much.  It wasn't the most scenic one but I liked how I was always running with someone.  I also got to work on my mental toughness.  I worked on catching people and passing them and holding my form.
While my time doesn't reflect a great race, I do feel like I had a good one.  In the past, I've always done about 30 seconds "slower" than normal and today I finished on par with my typical flat 5K race time.  So there is hope that I am significantly faster and am progressing. 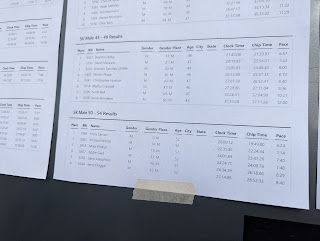