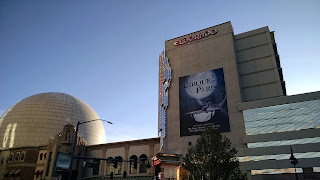 For the longest time, I've wanted to run a race in Reno.  The problem is that Reno is pretty far away from Salt Lake City (about 7.5 hours drive) and the number of races seem to be fairly minimal.

The one race I've targeted for awhile was the May Reno River Run.  It shows up from time to time and I always envisioned doing a full marathon.

However, this year Desert Sky Adventure put on the Biggest Little Half Marathon.  I've done a few of their races before, namely the Summerlin Half Marathon down in the Las Vegas area. They've always done a good job with their races (albeit a tiny bit expensive) so I decided to make a road trip out to Reno and get this one off my bucket list. 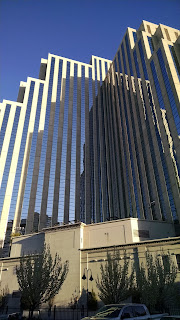 
The day before the race I dropped by the local running store and easily picked up my bib.  I could've picked it up the day of but the less stress I have race morning, the better.  It was easy peasy and I got a chance to talk to the race director(s) and express my loyalty.

The morning of the race it was chilly but clear.  There was no wind but it was cold.  I parked at the Eldorado hotel.  I walked to the race start -- just below the famous Welcome to Reno sign and made sure I knew where to go.  I returned back to my car and relaxed.

I wound up putting on an extra shirt and donned some throw away gloves and made my way to the start line 15 minutes shy of the start.

The race started at 8 and despite the chill in the air I quickly warmed up.  I was glad I was wearing sunglasses as the sun started to climb.

The race starts downtown and you make a quick zig and a zag before reaching the Truckee River.  I've run here a time or two before on my jaunts to Reno.  In fact, the first mile or so I had run before.  You can see some of the photos from a previous run here.

I was feeling really stiff almost from the get go.  Memories of my last  two half marathons and the feeling of shuffling to the end lingered in my brain. 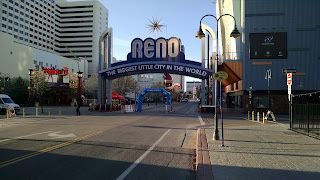 I tried to the enjoy the scenery of running by the Truckee River and the mansions that crested the hill.  It was really a remarkable day for running.

I was running with people for the majority of the race.  Despite there only being a few hundred half marathoners I was constantly running with someone.

The course was super well marked as we drifted into a middle class neighborhood.  The downtown buildings drifted behind us as we made our way to Virginia Lake, the turn around point.

Eventually the relatively flat neighborhoods let us out into a fairly good downhill.  I was around 4 miles into the race and I was feeling okay.  The stiffness had faded and the fact that I hadn't run in a few days seemed to have helped.  After all, I've run a ton of half (7) marathons in the past month and I was feeling every single one of them.

I was really relieved to get to the turn around point.  I wasn't totally dead and I felt like I had enough energy in me to know that it was going to be a death march to the finish.  I nibbled on a cucumber / mint gu as I circled around the aid station.  My Garmin read 6.55 miles, so I knew the course was accurate.

It was great running around Virginia Lake... I always get a little inspired seeing the lead pack of runners and everyone is excited and rooting for each other.  From what I could tell, I was solidly in the middle of the pack of the race, which was fine with me.  I wasn't really there to compete, so much as to just simply enjoy trekking around Reno.

The rough part about the second half of the race is that it is mostly up hill.  That wonderful downhill section I was enjoying about 15 minutes later was now my nemesis.  Luckily, the incline isn't too but it is a grind.  I am happy to report, though, my pace wasn't too awful.

The caffeinated gu I had ate at the turn around kicked in soon afterwards and I was actually taking down some decent splits for that late in the race.  I didn't feel like I had the "oomph" to really push any harder, but I wasn't slogging through it.

The return trip through the neighborhoods was awesome and I could see the skyline of the downtown area in the distance, so I knew it was getting closer.

The mile markers were spot on and I was really excited to reach the final mile.  I was tired and my legs were heavy but doing way better than my last few halves.

The problem was that last mile seemed extra long.  Now keep in mind the turn around was at 6.55 and I ran the same course back, but it was like the final mile just never finished.  My Garmin, when I finished, read 13.25 miles and a few others reported that their Garmin read long.  But looking at the Garmin dump it looks like my watch might've dropped connection at about the final mile marker. 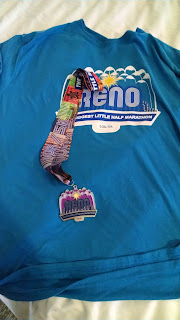 After the race I wound up grabbing something to drink.  They had a decent selection of post race food -- chocolate milk (which seems to be a staple these days), fruit, water and Gatorade.  I think they had chips too.

It was an absolutely beautiful day and it was great to socialize with people who were doing the 50-state quest.  I probably wound up meeting and talking to at least half a dozen folks.  I think everyone was in a good mood and enjoyed the course.

The medal is really nice.  Desert Sky Adventures has always done a really nice job designing their medals and the Reno race's didn't disappoint.  The shirt design is way cool as well, but not a fan of the cotton-like material (even though it says polyester).

I registered really late for this race -- and I really paid for it.  It was $85-ish dollars which is just about my limit for a half.  I was paying for the privilege of running through a pretty big city that required a good police (and volunteer) presence throughout.

They had around 7 aid stations -- maybe more and they were amply stocked with eager volunteers.  They basically consisted of water and or Tailwind or sports drink.  I carried my own, which I did use a bit as well.

The mile markers for the most part seemed accurate.  I was always within 10 seconds of it compared to my Garmin and the course marshaling was great. I never had a doubt as to where to go.  I am also impressed that they were able to keep traffic contained -- and I suspect a lot of the drivers were none to happy to see us judging by some of the waits at the intersection.

I will say I was pleased with my experience and if my travels take me to Reno again, I'd love to run this one again.
Posted by Eddie Gaul at 6:44 PM