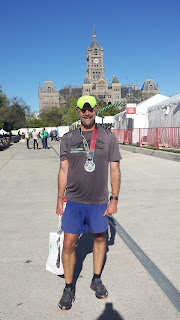 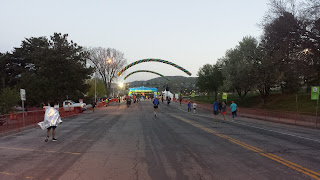 Last year right before I ran the Salt Lake City Marathon, I got a special offer from the race organizers: basically sign up a year in advance and get a nice hefty discount on the race.  So I figured, why not, for about $60 (I think) I committed to doing the half marathon. 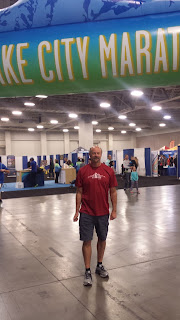 The day before the race I ventured downtown to pick up my shirt and bib.  I usually don't go downtown much despite it just being about 15 minutes away.  It was fairly easy although quite a maze in the hall.  There was a good buzz there and it seemed like they had a lot of vendors.  I had gone at lunch and it wasn't too bad -- I was in and out in under 10 minutes.


The trick to this race is to take the Trax / train system.  I live near the system, so it was a mile drive to the parking lot and I jumped on a free, heated train that took me about 100 yards from the start line.  Wound up running into Angie Pace and finally got a chance to meet another compulsive racer / runner.

I wound up killing about 30-40 minutes.  As usual, time went fast and it was sort of rush to get a final bathroom visit in, fire up the old Garmin, and dump my crap off at the bag check.

It took about 8 minutes or so before the race started for me.  It is an early start (7:00 AM) and there was still a bit of a chill in the air.  I had brought a bunch of clothes but I opted to go fairly minimal -- and I am glad I did.  Just shorts and a t-shirt was all I needed.  I could've used a pair of sunglasses though. 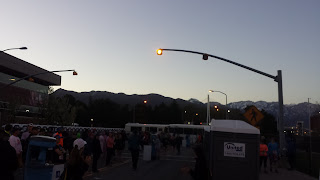 The first mile or so is challenging.  Almost immediately there is a steep climb.  It is probably the worst hill on the course but it is tough because you are just getting warmed up and you are at a pretty high elevation.  I definitely took a penalty on the first mile as I got acclimated and wormed my way around the crowds of runners.

The first 3 miles or so are in the Avenues near the University of Utah.  There are some very expensive houses the line the course and here you'll get a fair amount of crowd support.  Mostly families sitting on their lawns drinking coffee and wondering what possess people to go out running.  You can also see the downtown area from here and there are some great views.

There are some climbs here but it is mostly rolling hills -- like most of the route.

After exiting the Avenues you descend into the city via Memory Grove.  I love this section.  You have a nice downhill that isn't too crazy.  It is shady and people are still fresh and upbeat.  It is also woodsy here and there is a creek alongside you.  Just really a pleasant experience as you dip into the city.

I was feeling good here although I've done a bunch of halves of late and I was feeling every one of them.  My legs had absolutely no spring in them.  I was moving pretty good, but I knew I was going to pay a price later because the course starts to level out and there are some slow grinds.

Arriving into the city is nice -- there is usually a small crowd there and it helps to have people cheering for you.

Eventually you head east from Temple Square and the it is a slow grind.  There are many stately and old mansions that line South Temple Street but you really have to work at your pace here.  Also the sun is blinding... Despite an early morning start I was really wishing I had brought my sunglasses.

There are some more rolling hills as you head south.  I took advantage of some of the downhill sections as I sped by intersections that had been marshalled off.  I felt bad for the folks trying to get around town.  I guess they didn't get the memo that the marathon was today.

The full marathoners run with the halfers until about mile 9.  I was never alone and always running by people.  Sometimes being passed and sometimes passing.  I was so so so (x 100) happy that I was only running the half today.

The final 4 miles mostly follow the last 4 miles of the full marathon.  I kept expecting to see some elite marathoner fly by me as I really was running on fumes.  A gel had perked me up, but my legs just felt like led and I had absolutely no turnover.

One of the treats is running about half of Liberty Park.  This is an historic park and is lined with tall trees, lush green fields and in general is a place for the Salt Lake citizenry to hang out.  It also tends to be a place where runners hang out as it has a cinder wood loop around it.

The final miles couldn't come fast enough for me and I was so grateful to see the spires of the city courthouse coming into view.  One of the curses of this course too is that the finish line comes into view just as soon as you round a corner, but you still have a solid half mile to go before you actually reach it.

I was hoping to crack 2 hours on this course and I missed it by 41 seconds.  Not a big deal.  I am running dead legged though.  It was nice to come through the chute though and get a lot of encouragement, my name called as I finished.  It really felt like a big time marathon.... 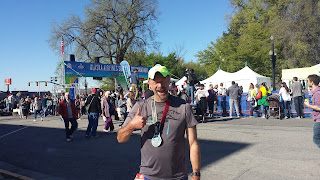 After the race I grabbed some water and honking beautiful medal.  I haven't received a medal that I was this excited about in a while (well, maybe Reno's).  I think the Salt Lake race organizers went all-out for their 15th anniversary of this race.

Also, they had a huge amount of "stuff" they were giving away.  As I made my way of the chutes to get some post race refreshments, I was handed a bag... Cool as my hands already were getting full of fruit cups and I was fumbling with my phone.

I wound up getting a ton of stuff: fruit, bananas, snack bars, soda, yogurt drinks, you name they had it.  My post race bag probably weighed 5 pounds before I was finished. 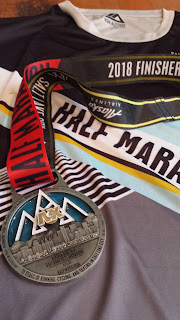 I had to walk a bit to get my gear bag, but it was just a nice day and they had plenty of vendors providing entertainment.  Seriously, with the sun out and a mild breeze it was almost like a perfect day.

The medal and shirt are works of art.  I was really excited about the shirt as it clearly states that I am a runner who did a half marathon.  No hiding or tiny print on it.  The medal was also specific to the half marathon and was heavy duty.  The little thing in the center of the mountains also moves. If you are a medal junky, this one was one to get. 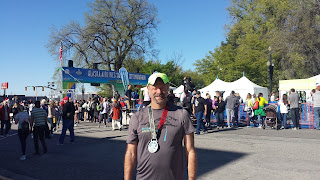 The course was well supported.  I have no complaints about that.  The volunteers were helpful throughout the process and there were aid stations probably every 1.5 miles or so.  The mile markers, like last year were off.  I think the last one was off more than the rest (mile marker 12) but overall the course seemed accurate.

I think this race does well for the city.  It gives the runner a nice tour of some of the highlights of the city.  The full marathon isn't super scenic (it is mostly residential running) but I really enjoy seeing the downtown area and it is a good community event.  It draws a solid field of runners both serious and casual.