On Sunday, June 1st, I ran my 12th marathon, knocking off the state of Wyoming off my 50-state list (not that I am trying that hard, but I am keeping track). 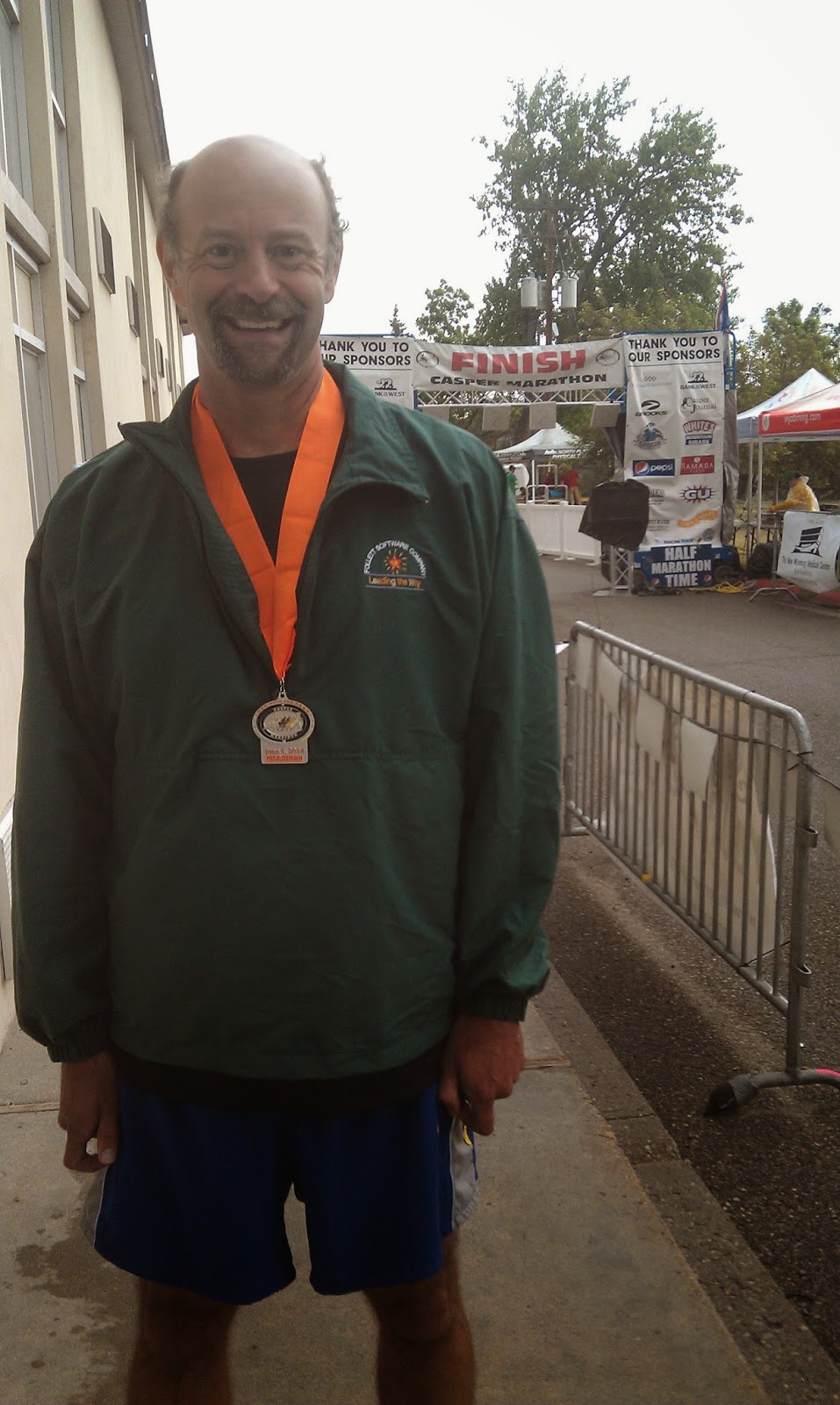 The race's headquarters were at the Casper Ramada.  For those considering this race, I highly recommend staying there.  The finish line is in the Ramada's backyard and you can literally finish, clean up and come back to the post race party with the least amount of hassles.

The bib pick-up was completely painless.  The "expo" was pretty small, consisting of a few supplement manufacturers and local running groups.  Within 5 minutes I had my bib and a bright orange, long sleeved tech shirt.  From the looks of it there were about 400 runners total for the half and the full marathon.  Many of the people at the race were those looking to knock Wyoming off their state's list.  There are also were plenty of Marathon Maniacs in their attire as well. 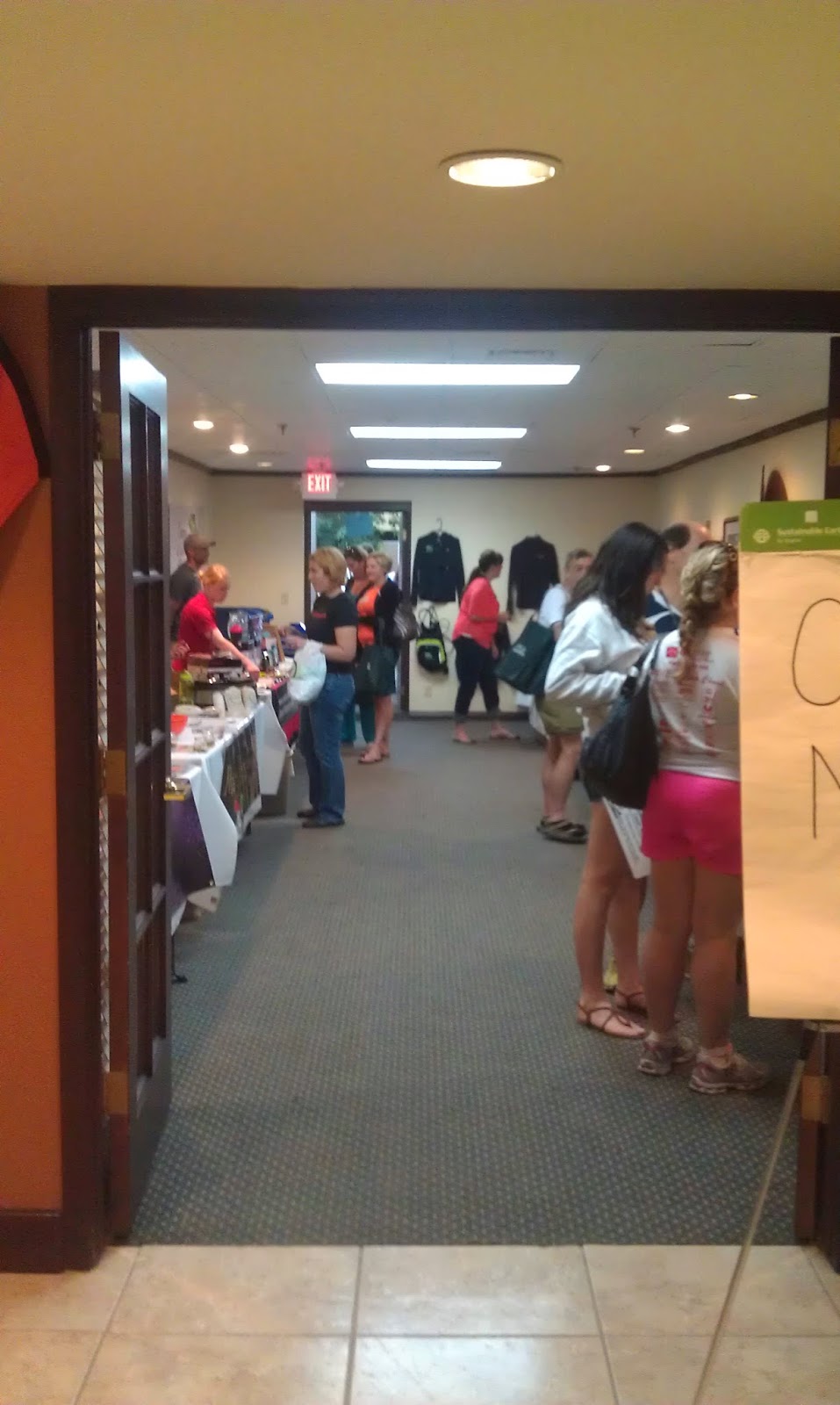 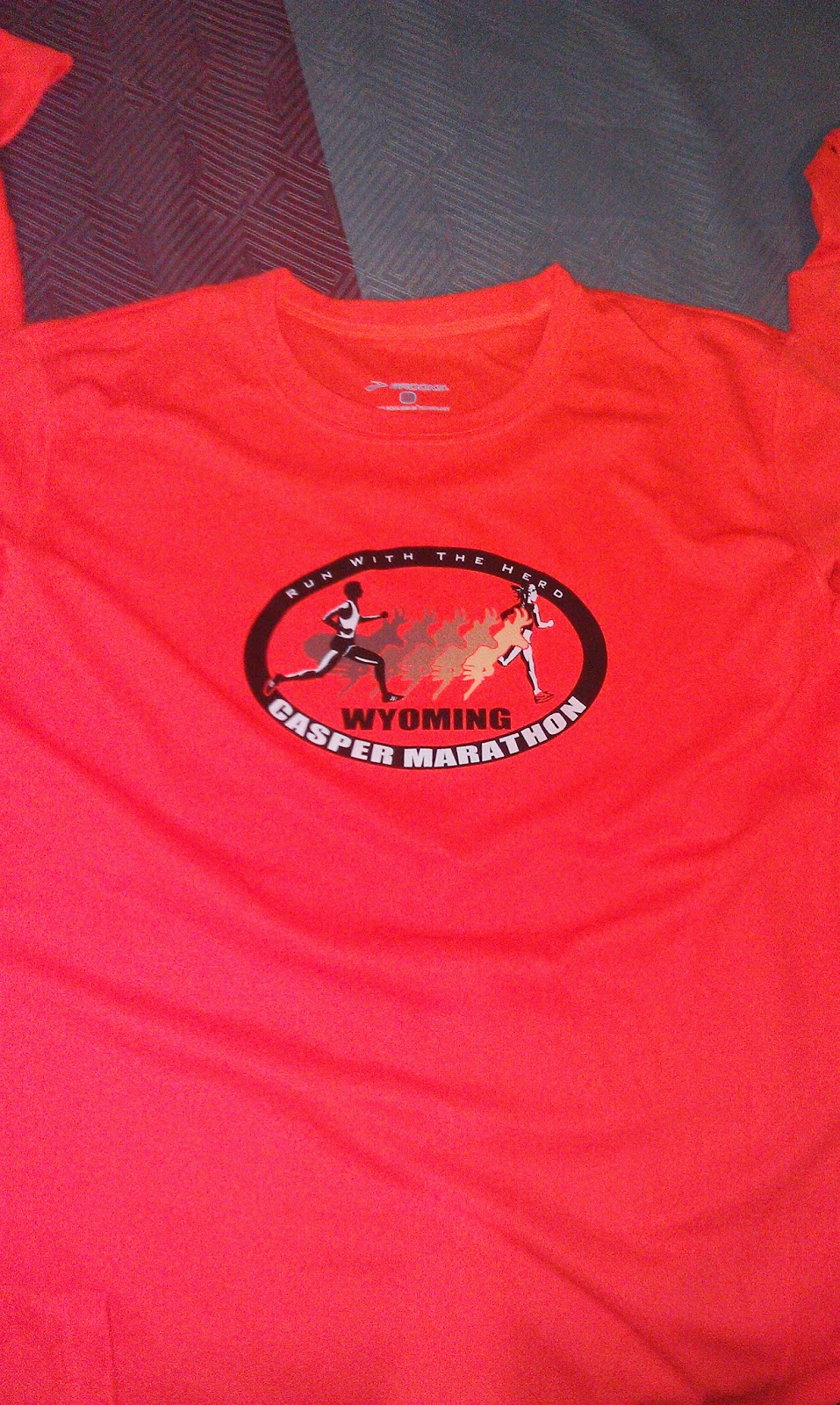 I didn't stay at the host hotel and I really regret not.  I stayed at the Motel 6 down the road in order to save a few bucks.  I had an absolutely tough time sleeping.  Pre-race anxiety, coupled with being in a new city / new state by myself just had me on edge.  In addition, the motel was NOISY.  I think it must be party zone for anyone coming off the freeway and it wasn't until after midnight that I managed to stay asleep.  I slept fitfully at best.

I carb loaded at the Casper Olive Garden and it was pretty good.  You can always count on Olive Garden to provide a good meal.  I expected to see other runners there but didn't.  It seemed like the entire town didn't know there was a marathon going on.

The race started promptly at 6:30 at the Casper Events Center.  I was on a bus at about 5:20 from the Ramada to the race site, which was a short 2 miles away.  I then killed about an hour in the events center.  There were plenty of people to talk to and they had clean toilets, food and beverages.  I made friends with anyone who sat next to me and read yesterday's paper and tried to relax.

The race started off with a thundering cannon shot.  The marathoners start first and we have to run a 5 mile loop near the events center.  You are at altitude -- about 5700 feet and I think you get as low as 5400.  For those from the midwest they weren't used to the thin air.  I didn't really notice it, probably because when I lived in Cottonwood Heights I was at 4700.

The first five miles are a bit dull.  You basically make a lap in the vicinity of the events center.  I expected to see Soda Lake, but you pretty much are surrounded by plains grass and rolling hills.  It wasn't terribly exciting but you did get a brief view of the Casper valley. 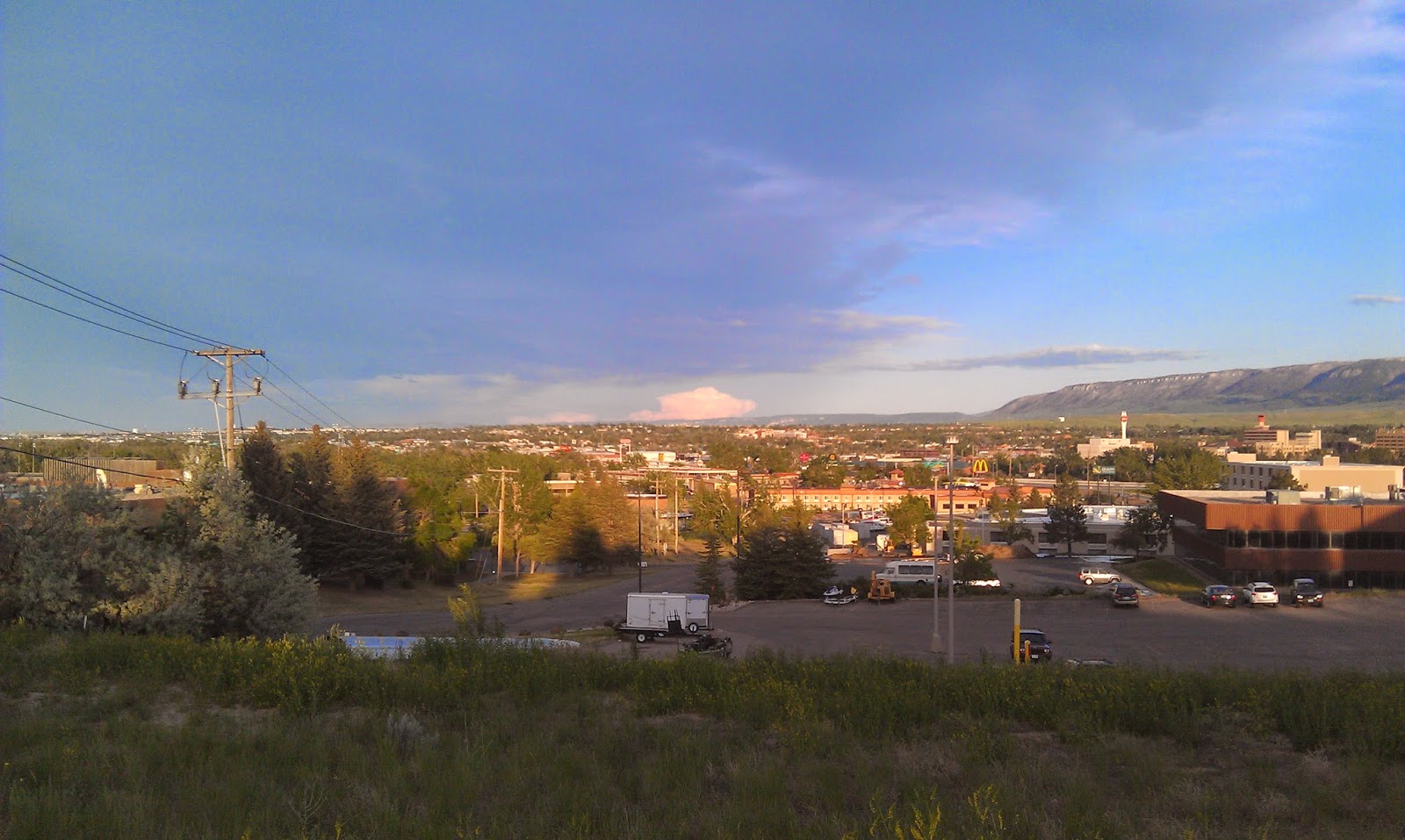 After making a circle you head towards the bike trail.  You make a knee jarring descent down a hill before jumping on to the bike trail where you meander through the city's HUGE bike trail system.  I didn't see any drinking fountains on the bike trail, nor bathrooms, but they were scenic and well maintained.  The bike trail also hugs the North Platte River and much of the area is shaded with trees and other vegetation.

Some of the time you are running by yourself,  however, I generally never found myself entirely alone except in the last mile or two.  Also the race doubles back on itself so you can get a glimpse of the race leaders and those behind you.  I had no problems with knowing where to go and the course was clearly marked.  Also, with the exception of mile marker 16 (I think they had it turned around the wrong way - you should've seen it after the turnaround, not before), the mile markers were spot on.

There was plenty of water / sports drink support.  Every 2 miles (or so) there was some very well maintained water stations and they had fluids, gels and fruits.  I always carry a Fuel Belt and I managed to drink everything I was carrying.

The race started out cool but not cold and I wore shorts and a tech t-shirt.  You'll see me in my jacket after the race but I ran as cool as I could and I sort of wished I had used a tank top instead.  When the race started, there was thundering and lightning far in the distance that was definitely threatening.  In fact at the race start we could hear it miles away.  Weather people had predicted it was going to rain at about 10:30 with the potential for severe conditions.

About 80 minutes into the race it did start to rain for 10 minutes.  It came down pretty good and I was really worried about getting chilled.  However, the rain was short lived and later in the race as I was baking on the bike trail I was lamenting the fact that it wasn't raining.  I've run through gale force winds (Green Bay 2011) and pouring rain (2013 Ogden) so I knew I could take just about whatever mother nature dished out.

Crowd support was pretty limited.  The groups at the fluid areas were helpful and at around mile 8 you pass the finish line and you get some love from them, but mostly the cheers are few and far between.  If you need throngs of strangers cheering you on (i.e. like Chicago) you'll be out of luck.

There was a pair of killer hills just before mile 16.  They slowed my marathon pace to a crawl, but I didn't panic.  Luckily the turn around point was here so just after climbing them you got to go down them.  It didn't really help much on account that my quads were already started to get sore and with the temperature climbing I knew miles 20 - 26 were going to be a challenge.

After 21 miles the course jumps onto a bike trail that loops around the city's golf course.  I found this to be the dullest portion of the race.  There was no one out here and for four miles the scenery was pretty limited.  There wasn't any shade either so you baked in the withering sun.  To a man, everyone I talked to said that was the worst part of the race.

I was struggling at this point.  Whether it was from being warm, a bit undertrained or having gone out too fast, my pace really crumbled here and I was do a shuffling run.  The last mile you make your way back to the hotel where there was plenty of post race support. 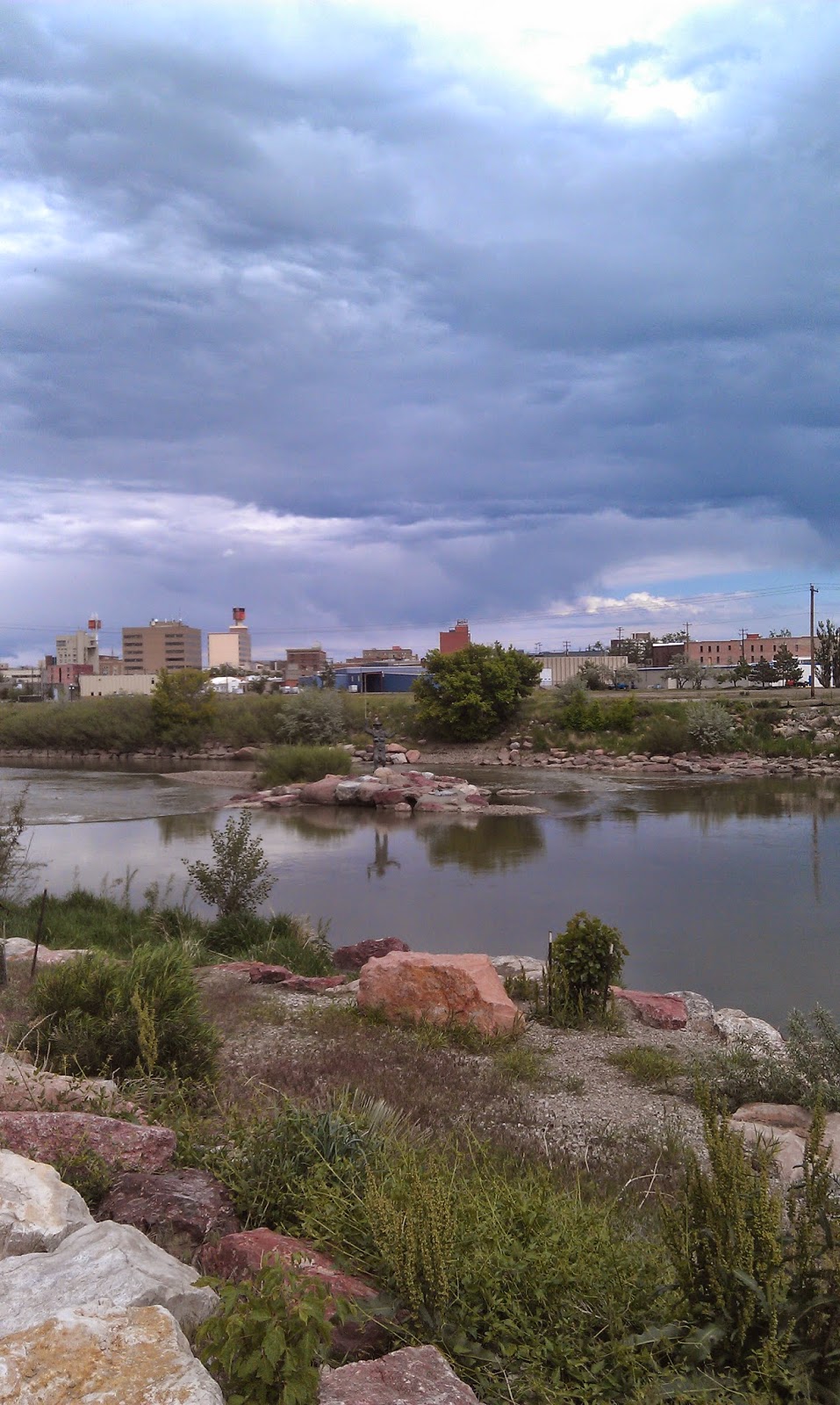 After the race, I received my medal and walked around for a bit trying to fight the waves of nausea that usually follow a long run.  When I could, I sat down and managed to get a little pop and fruit down. Normally post race food is pretty lame and not worth sticking around for.  Also the marathoners usually get screwed: the half marathons who finish first wolf all the food barely leaving anything for those running 26.2 miles.  This one was a pleasant exception. There was NO shortage of food here and I have to really praise the race directors:  beer (I don't drink but I saw many guys with 4+ of them), soda, good looking fruit, tons of pizza, sub sandwiches, cookies, granola bars, milk, soy milk... just about anything you could want and if you wanted more, it was help yourself.  I wound up sitting around for 90 minutes after the race trying to eat and socializing with people from South Carolina, Tennessee and Illinois.  I love a good post race finish like this and it would encourage me to come back again next year.

However, after about 90 minutes the storm that was threatening took over.  Gale force winds and rains hit the area and at that point most people took off.  I was starting to get chilled and left too.

Overall, I had a very good time here.  The organizers of the Casper Marathon did a fantastic job.  The volunteers were awesome, plenty of well stocked stations and other than mile 16 the course markings were spot on.  The post race party was also fantastic and well exceeded my expectations.  I liked the medal, but wished the lanyard was a bit more decorative.  I also hope that organizers will get this course certified; I think they would get a larger draw from those who only race certified / Boston qualifying races.

My 4:19 time was the second slowest marathon for me and not totally unexpected.  I've gotten a little slower over the winter and the long runs I did beforehand were decent but not indicative of any break throughs.  I probably went out way too fast.  I was hoping to run 9:15s at best and try to hold on as long as I could.  Having run a 1:50 half, I figured that 4:10 wasn't too unreasonable (I hit mile 13 just shy of 2 hours).  I think the heat fried me as well as the hills.  Mentally the last half of the course is a bit of a grind. I hate doubling back on myself and while it is sort of motivating to see how many people you are ahead of, I would've liked some new scenery.

Definitely worth the experience and I am not upset with myself.  I figured 4:00 was an A-level performance, B was 4:15 and 4:30 was passable.  Anytime I can finish a marathon without walking is a win in my book.