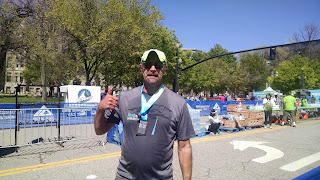 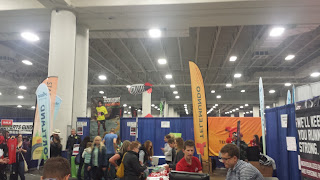 
Last spring I got a pretty sweet offer via Facebook:  Sign up a year in advance and pay less than $3 a mile for the full marathon.  You can't find very many marathons at that price.  So taking a fairly large gamble, I decided to sign up.

I also had wanted to run the Salt Lake City Marathon for a while.  It is in my "home town" and I wanted to be able to say I had run it.  I also don't go downtown much, so it would give me a chance to explore the biggest city in Northern Utah.


On Friday, during my lunch hour, I made the 15 minute trip to the convention center.  Packet pick-up was fairly quick and they had a free exhibitors there.  It also doubles with a fitness convention, but since I was on my lunch hour, I didn't even bother to check it out.

What is great about local races is that I can sleep in my own house / bed.  I didn't have a lot of anxiety over the marathon.  So I actually slept pretty well.  I was up before my 4:30 alarm went off and managed to eat some food, hydrate and put the finishing touches to my gear.

I live fairly close to a rail station, so I drove there, parked and took a 5:15 AM train.  The trains are free on race day (provided you have a bib) and I figured the train would be packed.  Boy was I wrong... at my station there were a handful of riders that were doing the race.  However, once the train got near the finish line, hundreds of people jumped on.

It was about a 30 minute ride to the race start and I wound up making small talk with another runner.  Time went by fast and the train dropped us off right at the starting line.  No stressful parking, didn't cost anything and I had maybe 45 minutes to kill before the race start. 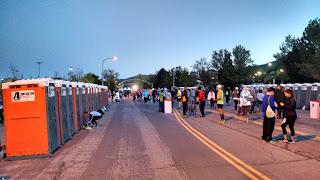 I was one of the first groups there and the bathroom situation was awesome.  Just find an open one and go.  About 15 - 20 minutes before the race, however, and they were lined up 8 - 10 deep.  I managed to go once more before dumping my warm-up gear at the bag drop. 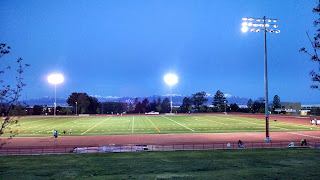 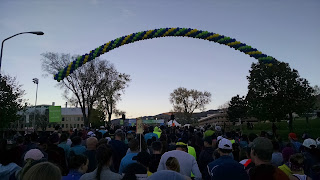 The race started at 7 AM sharp.  A perfect time in my opinion.  It wasn't hot and the sun was just coming up.  I sort of got a late jump on the starting time and was lined up about 75% of the way in the back.  I suppose this was a good thing, as it makes me start out a little more conservatively.  However, I did have to wend my way around some slower folks. 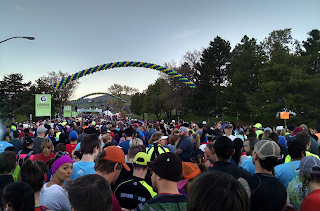 The race headquarters are at the University of Utah and the race also immediately starts off with a couple of hills.  They don't last terribly long but they are enough to make you slow up a bit.  I didn't mind as I knew the next few miles would largely be downhill.

I loved running along the university roads.  There are many old and stately mansions there and the neighborhood had a lot of charm.

Some of the folks came out and were cheering us on.  In fact, throughout the entire race there were spots of friendly neighbors out lending support.  Some offered makeshift aid stations while others were there to offer a friendly cheer.  That was nice because I know the race causes a lot of problems for the locals. 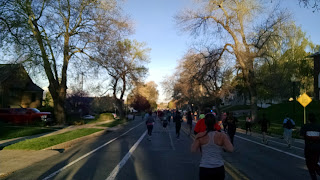 Miles 3 through 5, in fact, have some wonderful, but not-to-killer downhills.  I was really enjoying the course so far and was hoping that it would be like this the entire run.  The views and early morning atmosphere was making this run a treat.

I did have to make a pit stop at the mile 3 aid station.  They had plenty of bathrooms but luckily I didn't have to waste too much time getting into one.  Almost from the start I had had to go to the bathroom.  I would've gone at the first aid station, but there were lines.  I was so relieved... pretty race nerves along with too much to drink the morning.  I figured I lost about 30 - 40 seconds.  Not the end of the world... 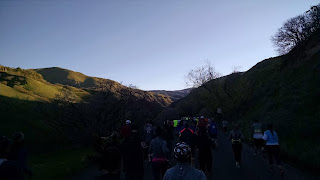 The next downhill section to the north side of the side was spectacular.  I was speeding along the downhill part and managed to knock off some pretty good splits.  I was still holding back, as I knew I had some 20 miles to go and I know I pay for fast starts dearly in the latter part of the race.  However, I was letting gravity pull me along.

There were aid stations roughly every mile and most were stocked with gels, Gatorade (probably Endurance  Formula from the taste of it) and water.  Some had bananas and oranges.  I was also carrying 28 ounces of Tailwind and my own stash of Gu.  In fact, this race had more Gu than any other I've been in... props to the organizers.

After exiting the canyon, you come up on the the north side of the city.  I've been to parts of the city before and I recognized where I was.  You run along beautiful Memory Grove for a bit before making a quick pass near the LDS Temple.  You don't actually get to see the temple but it is in the vicinity. 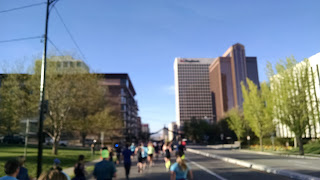 Around mile 9 I was starting to feel a little off.  As we peeled off from the half marathoners I felt a little bit of hesitation.  Did I have what it took to finish without dying?  Had I gone out too fast?  What did the second half of the course have in store for me?

I bared down and focused on trying to stay as comfort and hydrated as I could.  My last 3 marathons have been semi-grueling affairs and I wanted to -- at all costs -- to avoid having another meltdown.

I reached the half way point at roughly 2:01 or so.  That was my goal and while it was ambitious, I knew I had been aided by the fact that the first half of the race is largely downhill.  I could feel the altitude, the heat and the rolling hills taking their toll on me.

At this point, the race was mostly being run through residential neighborhoods.  A lot of people were struggling with getting around the city on account of all the blockades.  Also, it appears that it is mandated that EVERY single street corner be manned by a police officer.  Seriously -- every single one.  If I ever wanted to commit a crime, the day when the Salt Lake marathon is being run is the day I'd do it.

We did get a chance to run a loop around a hilly park.  It was very nice here but there were plenty of rolling hills.

Also, I noticed almost immediately that the mile markers were off.  I'd see mile 5, for instance, and look at my Garmin and see that I was at 5.25 miles.  I checked periodically with other runners and they too felt like they were off (it wouldn't correct itself until mile 25).

I recognized the general areas that I was running in and luckily Salt Lake is very easy to navigate with our coordinate system for streets.  So I always knew where I was.  However, I was getting more fatigued with every mile.  It was if my legs, which had been fairly well rested, just didn't have it in them today.  I lamented that I had run better training runs.

The pounding continued and I was counting down the number of quarter miles around mile 18.  I kept envisioning how much longer I had to go based upon my normal training runs.

Despite the elevation chart, there are lots of little hills.  I don't remember any crushing hills, but the course could definitely be profiled as mild, inclines and declines.  There were a few stretches of flats but either I was making a slow ascent or descent almost the entire race.  Looking at my Garmin, I see over 800 feet of elevation climb -- that is a lot for a full marathon.

Around mile 20 I accidentally stepped / kicked a pylon.  It didn't hurt or anything but it caused me to pull up.  And my opposite calf muscle locked up. Did I have a 10K walk now?  Luckily, some stretching managed to loosen it up, but it was scary moment.

I could smell the finish at 24 and while my pace was awful (I had a volunteer / medical person ask me if I was okay) I was feeling strong enough that I knew I'd be able to finish without resorting to a humbling walk.

It was also nice to run the perimeter of Liberty Park. This is a gorgeous and historic park just south of the capitol.  It was also shaded and I knew that the finish line was near. 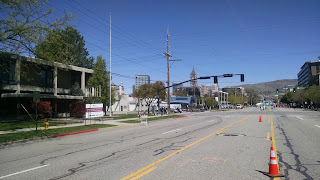 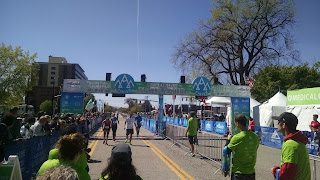 I was so glad to see the finish line.  However, it was still half a mile away.  It always seems to be so far away.  I kept trudging -- what felt like running through quicksand -- until I reached the finish.

I was so glad to cross the finish line.

Shari was there and she handed me a Coke, which I sucked down greedily.  It really helps settle my stomach. I actually didn't feel too bad once I finished.  Usually, I feel like throwing up but I managed to just walk it off.

I grabbed some food and water and made my way to the gear check.  Most of the runners had already left as the half marathon is the race's biggest draw.  There was plenty of food at the end as well, although the variety was pretty limited. 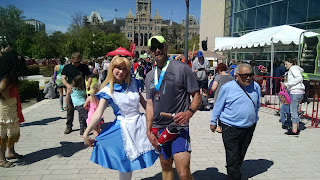 This race was bitter sweet.  I was glad to have finished and gotten my first marathon for 2017 done.  However, I was hoping for sub 4:15.  I realize this course is challenging and I certainly wouldn't call it a fast course.  It is an honest 26.2 however.  There are some declines but the rest of the course make it a good one.

I loved the aid stations.  They were properly manned and had more than ample supplies.  Usually races skimp on gels -- but this one had plenty of them.  In fact, if I had to do this one again, I'd probably not pack any.  I did, however, go through my own Tailwind.  I drink a lot and it was sunny and while the temperature wasn't extremely hot, I did drink. 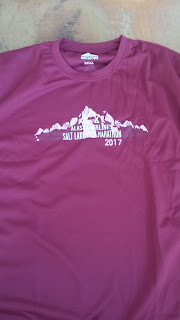 There could've been a better selection of food at the end.  Soda or even something more tangible.  They did have cream Popsicles, some corn rice cake thingy, water and Gatorade.  They also had fruit cups.  Again, I would've loved to see have seen sodas or something.

The tech shirt was a nice design and pretty standard issue as far as races go.  The medal was a little small but I liked the leather keepsake it came in.  The swag bag also was filled with lots of extras.

For the price I paid, I got a great deal and I was really excited to have run the marathon representing the city that I live in.  I grabbed their special deal for 2018 and signed up for the half marathon.

This race is definitely worth doing and if you don't mind rolling hills, this race is a good marathon to choose for Utah.