Over the winter holidays I signed up for the Winter Striders Race Series.  Basically for about $130 you get 5 races: 5K, 10K, 10M, Half marathon and 30K.  The concept of this race is to get you trained and ready to run the Ogden Marathon.

It is a bargain considering you get 5 fully supported races for about $25 a piece.  You do get one shirt and 2 finisher medals (assuming you do the half and 30K).

It is a bit of a drive from Murray to Ogden but I usually try to pair my adventures with other things up there to make it more worthwhile.

I did roll in around 7:10, plenty of time for the 8AM start.  I managed to snag my shirt and bib and use the flush toilets.  It is so nice to have shelter and a place to be fairly warm prior to the race start.

Around 7:22 I started my warm up -- and I felt like crap.  My legs were just dead and not responding.  Couple that with the fact that I had a head cold -- well let's just say I wasn't anticipating any PRs.   In fact, I was still a little hazy from the cough medicine I had taken the night before.  I was sort of regretting even showing up.

But I told myself to tough it out -- 3 miles is 3 miles and I can knock out that any day of the week. 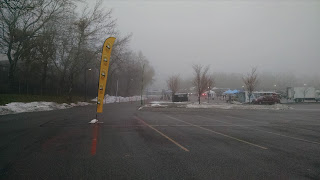 
Last year when I did this race the roads were slick and it was hard to take advantage of any downhills.  We've had a bit of a heat wave (as far as Februaries go) and the roads were definitely not slick.  The weather was actually cooperating with having a fast race.

I went out in shorts, throw away gloves, and two tech shirts.  I was completely fine in this.  I saw a lot of people bundled up, but it wasn't that bad.

The first mile is actually fairly flat.  Looking at it, though there is about 60 feet of elevation climb.  I decided to take the first mile somewhat easy.  I remembered from last year that the course gets a lot more challenging in the second mile.

The crappy warm-up I had taken was forgotten and my legs thankfully remembered how to race a 5K.
The race is run through residential subdivisions (some appear to be very well-to-do).  There isn't a whole lot of visual appeal on this race.

The second mile -- especially the first half of it, is just nothing but up.  Everyone's easy pace suddenly got a lot more difficult.  There is about 175 feet of climbing and most of it is right away.  It felt like my legs were so heavy and it took everything I had not to walk.  People who I had been working off of were walking.  The hills are just that tough.

Once you summit the hills though you are rewarded with some super fast miles.  Here I was able to hammer the downhills without fear of falling.  I made up a lot of ground.  Although it was really hard to change gears once I got done with the delicious downhill and return to flats.

The last mile has some inclines as well, but it is primarily a downhill finish.  Usually I am dying in the latter half of a 5K but I still had plenty in the tank. 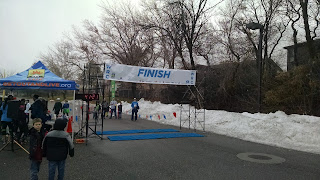 
I was mildly surprised that I did as well as I did in this race.  I had forgotten how hard this race is.  The hills are killer.  But even considering the hills and not exactly feeling very well, I ran better than last year (okay, not by much, but definitely faster).

The course came up short this year in terms of mileage, but it was the same as last year.  I have a feeling that my Garmin lost contact a bit or I am getting really good at running tangents. 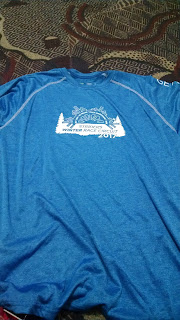 I grabbed some Gatorade and coffee and milled about a bit.  I did NOT recognize or know anyone at all.  I am friends with the race director, but I couldn't find her after the race either. 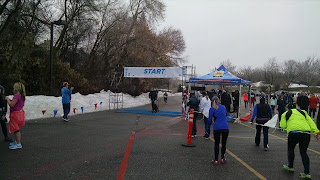 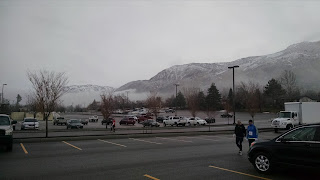 I grabbed some photos and changed in the bathrooms before heading out to Virgs Restaurant for breakfast.  Originally I had targeted a small cafe down the road, but they weren't open yet.   Virg's was a good choice -- they have a huge breakfast and at first I didn't think I was going to finish it, but I managed to put it all down.  I've had dinner before there but their breakfast is better. 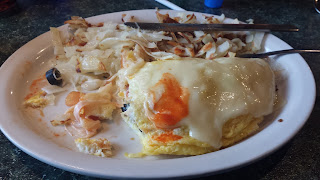 I totally expected not to do well in this race.  My warm-up was just awful and I thought for sure my morning was going to be one culminated by frustration.  It was just a bummer that this race fell on two other races -- I normally do the Valentine's Day race in Bountiful.

Either way, I have the 10K in two weeks, which is even more painful than the 5K in terms of hills.