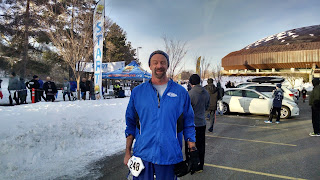 
Well, to kick the season off, I decided to sign up for the Winter Striders Race Circuit.  This is a series of races geared to promote the Ogden Marathon as well as serve as a training vehicle to get you fit enough to run 13.1 or 26.2 miles.

Normally I probably wouldn't drive all the way to Ogden for a 5K but they do keep track of your standings in the overall series, so there is a bit of a competitive element to it. 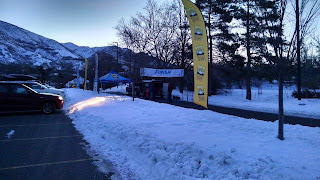 
I arrived in plenty of time and managed to snag a prime parking spot near the finish line.  I managed to get my bib and shirt and had the comforts of the Dee Events Center to prepare for the race (as well as clean / flush toilets).  I also had a chance to visit with the chief race director who remembered me from last year.  Always nice!

Being that it was cold and the route was on roads, I was a little worried about black ice.  Couple this with the fact that the course was extremely hilly (with downhills and uphills), I knew it was going to be a tough race.

I went out with shirts, a shirt-sleeved tech shirt and my Vegas running jacket.  I also threw on a pair of heavy-duty gloves and a small hat.  I was one of the few in shorts and was pretty happy with my decision on what to wear.

The race started at 8 and almost right away there was a patch or two of black ice.  Luckily it was avoidable but it sort of set me up to be extremely cautious.

The first mile has some gentle ascents to it and I knew that the "major" hills were at mile 2.  Thankfully, I went out fairly conservatively and help something back for the second half. While I wanted to hit the first mile at 8 minutes flat, I was happy to see that I hit the first mile slightly slower.

After the first mile, the hills really kicked in.  We aren't talking mild rollers here, but maybe 1/4 mile at 4 - 6% grade hills.  I was holding my own on the hills but I noticed a lot of lighter weight people were climbing them really easily.  I do very little training on hills, so I know what I need to work on.

After about the half way point, the descents started.  I was hoping to make up some time here but the roads had a bit of wetness on them and I was terrified of going all out and falling on face.  Luckily I didn't have any problems but there was always something in the back of my mind, so I really didn't take advantage of the hills like I would normally do.

By the end of mile 2, my legs were like jello from the constant up and downs.  I did get a second wind here and while it helped to have mostly a downhill mile, I had plenty left in the tank. 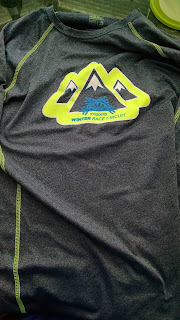 I felt like I had run the race exactly the way I wanted to.  Granted it is a pretty slow 5K compared to the rest of my times, but if you look at the fact that I was running at close to 5000 feet of elevation and had 277 feet of elevation climb (according to my Garmin) I was within reason of a normal, if not slightly better than average 5K.  I also chatted with a few other runners who indicated they were about 1 - 2 minutes slower than usual. 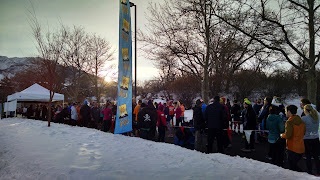 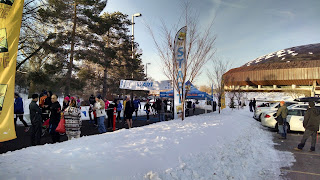 After the race, I chatted with a few people and did a cool down.  I snapped a bunch of pictures of the valley of Ogden and some gorgeous snow covered mountains which you can enjoy below.

By the time I had gotten back 90% of the people had taken off and they were taking down the finish line.  I grabbed a few bananas and donuts for the ride home.

Overall, a good race.  I was a little worried about race course congestion.  They had two races going on: a short races (2.55 miles) and the 5K.  But the directions on where to go were simple and most people were doing the long race.

Looking forward to building on this for a positive 2016. 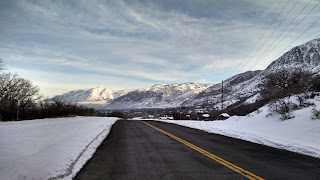 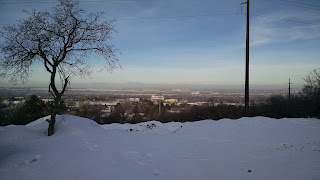 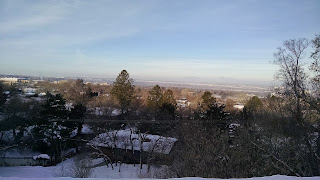