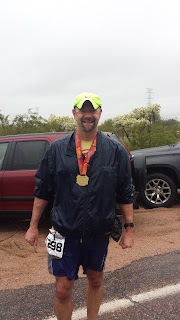 
I didn't think this race was going to happen.  First off, I had signed up for the full marathon about 2 weeks ago.  I was feeling really good and ready to knock off Arizona again.  I had put in the training, the miles, the long runs and had fully prepped for the full.

Well, 2 days before I left on the trip I had a tickling cough.  And every few days it got a bit worse.  By midweek I was whimpering -- I just wanted to crawl into a hole and die.  I'd wake up with massive sinus pressure only for that to be relieved and have it settle into my chest.  I had this smoker hack that would practically cripple me and a little sore throat.  I am sure at times I had a temperature.

I ran exactly once during the week and it was an easy and miserable 4 miles.  I began to wonder if I was going to be ale to run at all.

Well, I took it as easy as I could, loaded up on every medicine I could find and prayed that I would be able to at least run a half marathon.  I didn't want to get nothing but a t-shirt for my $130 registration fee.

Luckily, the kind folks at the Lost Dutchman marathon allows for free race transfers.  So when I rolled into Arizona on Friday I tentatively switched -- with some doubts that I would be running at all.

When Sunday finally rolled around I felt good enough to run.  How far and how fast... not sure... but I was going to give it a go. 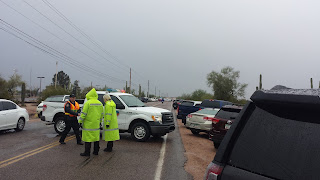 I woke up on Sunday around 5 AM and got ready and ate some food.  By 5:50 I was out the door from my brother's apartment to Apache Junction -- about 30 minutes away from Tempe.

All the way there it rained -- from a little pitter patter to a solid stream.  It seemed to get more steady the further east I went.  Great... running in the rain.

I got there and quickly used the bathroom.  There was only a short line-up and I thought about heading over to the starting line, which was about .25 miles away from the first row of bathrooms.  There was no shelter up there so I just went back to my car and hunkered down for another 15 minutes.

I wore shorts, heavy gloves, a running cap, a throw-away windbreaker and a tech shirt.

I didn't know what I had and I just wanted to make it through the race.  I wasn't sure if I was going to get 3 miles out and start hacking up a lung.  My saving grace, I figured, was that the course was an out-and-back, so if worse came to worse, I could just simple make my way back.  Luckily, that didn't happen.

Sure, occasionally I had a solid cough, but I was making good progress.  My legs were fresh and the air temperature was perfect.  Sure, I was wet and slightly cold, but I was feeling better than expected.

The race is held on paved backroads.  There were some rolling hills and some slight inclines / declines throughout the race.  In fact, it almost seemed like I was running uphill most of the race.  My Garmin reported otherwise, but mentally it was sort of challenging.

I figured around the turn around that I had went out too fast.  I just felt gassed and sluggish. However, once I turned around, the wind that was blowing in my face ended and I had it on my back.  Also I got a good downhill.  My pace immediately increased and I knew at this point that I was going to be able to finish.

I did lose a heavy glove.  Around mile 9 or so my shorts were thoroughly wet and every few hundred yards I had to pull up my shorts.  I stuck my gloves into my pocket and while running tied up my shorts in attempt to make them stop falling.  When I went to put my glove back on, one was missing.  Argh...  I didn't see it behind me and I certainly wasn't going to go look for it.

I really pushed it for the last 5K and I completely stunned myself crossing in 1:56.  When I had started, I figured I was going to run a 2:00+ hour half. When I started, I let myself off the hook as far as trying to have an awesome race.  I just wanted to finish on this one. 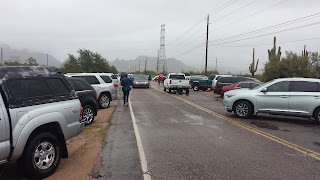 
I am so glad I didn't do the marathon.  It would've been a really rough day.  I wasn't feeling up to it and I know the marathoners had to wait an hour (at least) in an open field before the 7 AM start.  Sitting there in the mud would not have been fun.

The half marathon course was okay.  It was an honest course and the mile markers were spot on with my Garmin.  There weren't any great views -- probably because of the heavy cloud cover.  It was just road running along a desert road lined with cactus and desert scrub.  The landscape was dotted with the occasional house or trailer.

They had aid stations every mile (except at the turn around) and the volunteers were enthusiastic.  Crowd support was minimal but the volunteers made up for that.  Traffic was blocked off so I never felt like I was running in an unsafe environment. 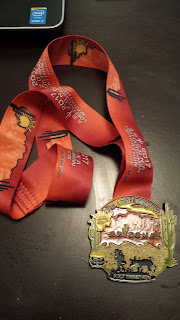 Organization was really good.  There were signs from the freeway with arrows showing you how to get to Prospector Park.  There was a brief delay in parking but otherwise it was well organized.

There were plenty of bathrooms on the course as well. 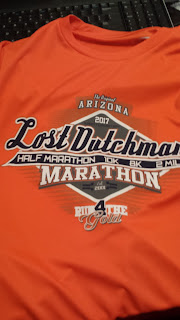 The race's proceeds goes to youth organizations in Apache Junction, so while the cost of the race is slightly higher than typical, it goes to a very good cause.  I was glad to pay the extra few dollars.

Post race had some food / water.  I just grabbed  Muscle Milk and headed back.  I knew I was going to get cold soon and to be honest, I wasn't that hungry.  It looked like they had quite a spread though -- I just was cold and wanted to turn the car's heater up and make the drive back home.

I'd like to run the marathon on this one -- I suspect the course would've been more exciting.  The half's course was just kind of "blah".  Not a lot stood out for me other than the support I received, which was awesome.

I was pretty happy with my time.  I didn't expect to finish in my "average" time.  I just wasn't 100% and the weather was difficult to contend with.  As stated before, I wasn't really racing this race, but I still wanted to turn in a good time.  I am just happy I didn't have a coughing fit (except at the end).
Posted by Eddie Gaul at 2:17 PM