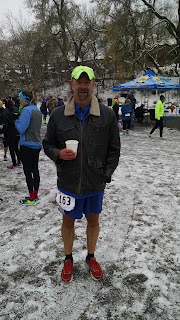 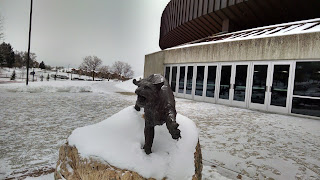 I had hopes I'd do well.  I felt like I've turned the corner with my cold and despite a lackluster week of training, I felt like I could make a decent showing.

I was a little worried upon getting there though.  The week had started out fairly warm and spring like, however, as the week wore on, it got colder -- like 21F-ish colder.  Couple that with the fact that it had snowed a bit.

Being that this course is hilly I was worried about slipping.  Even on the way into pick up my bib I slipped a little on the driveway around the Dee Events Center. 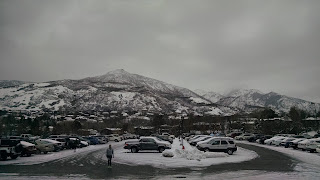 
The 10K is really not an easy race.  Like the 5K, it has a lot of hills.  The race starts with a gentle ascent that if you aren't ready for, will leave you breathless (also considering you are at 4500 feet).  However, once you get to about the half mile mark the fun starts.  You are greeted with a fantastic downhill.

I was really nervous about taking the downhill fast.  By the time the race had started, the road conditions weren't as bad as the picture above, but it was still slick looking.  While I wasn't feeling any slipperiness underfoot I didn't want to be the first to fall flat on my face.

So I was definitely braking on the downhills. 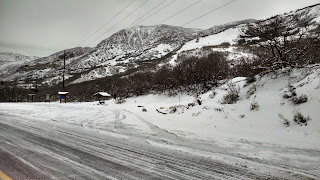 I ran the first 5K in about 25:19, which for me was about where I wanted to be.  I felt good for the most part, but I think last week's half marathon and the fact that I am still struggling to breath a bit from my cold.

I dialed it back a bit but I felt like I was making okay progress.  I knew the hardest part of the race was coming up as well.  All the downhills we had would now have to be made up.

Starting at about mile 4.5, the monkey is on your back and it is almost a straight climb back to the starting line.  I knew it was going to be tough, and I felt a little empowered by passing some of the people who were walking (or those who had run the short course).  But I really didn't have a lot here and even at the end, when it is mostly downhill, I couldn't turn on the jets. 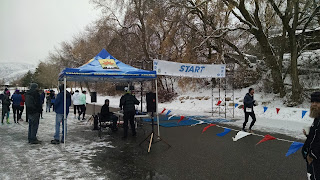 After crossing the finish line, I grabbed a cup of coffee and thankfully they had a few donut holes (thanks JS!)  My hands were frozen due to me wearing paper-thin gloves, but the rest of me was fine.  I was definitely chilled though and I was one of the few in shorts.

I was really disappointed with my time.  I do realize the conditions were tough and I was under the weather, but I was really hoping to get very close to last year's time (52 and change).

I lingered around a bit a trying to figure out what to do with myself.  I had visions of going hiking or going to Crystal Springs.  I wound up going out for breakfast at the Cafe Ville Bella.  I had wanted to go there last time I had raced in Ogden but they hadn't opened.  Had a huge breakfast and it was close by to the race.  Always fun trying something new! 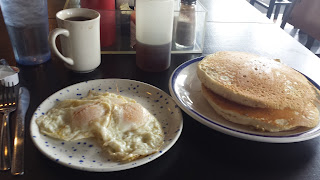 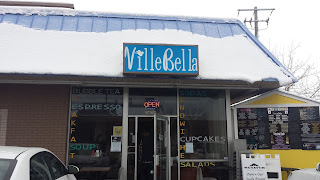