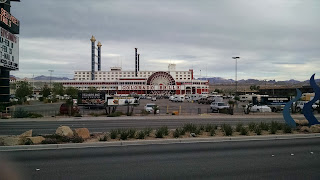 While my blog is mostly about running, I do like to recap my adventures of my trips to races.  Mostly I just like to capture these moments for myself.  However, maybe you are bored at work or something and you like to read about my adventures (or maybe you are my mom and like to hear these stories).

Either way, on my way down to the Lost Dutchman Marathon we passed through Laughlin Nevada.  I've been to most gaming towns throughout Nevada but I have never made it down to the southernest part of the state.

Laughlin itself has fallen on hard times since the Great Recession.  And when I got there it sort of showed.  A lot of the hotels were in dire need of updating and it just struck me as worn out and tired.

To me, Laughlin is a place where senior citizens go where you don't want the expense and the hustle and bustle of Las Vegas, and yet you still want the Vegas experience.  Hot weather, gambling, and cheap buffets.  Just like Vegas used to be.

I am 47 and I felt like I was one of the youngest ones there.

We rolled into Laughlin, making the epic drive from Reno to Laughlin all in one day.  On the way in, we had stopped at the Suncoast Resort for a delicious buffet.  By the time we rolled in it was pushing 9 pm (if not later).

I was worn out and tired of driving -- as it takes over 8 hours to go from Reno to Laughlin.

Also, the last 90 minutes I was driving in pitch darkness and almost swerved off the road when a raccoon or something jumped into the middle of the road.  It is so easy to lose control of your car going 75.  Luckily, the varmint saw me coming and got out of the way, but it was white knuckle driving.

Finally, after passing through Searchlight NV we reached Laughlin.  We came down a massive hill and it was a joy to see the lights of their "strip" below.

We quickly found Harrah's of Laughlin where I had scored some $21/night rooms.  I was feeling horrible -- I had a touch of bronchitis and I was just exhausted from driving.

We made the long walk from the parking lot to check-in.  There obviously was a problem with our room as the lady checking us in was talking with her supervisor.

The last thing I wanted to do was wait ... I just wanted to clean up and go to bed.

The check-in lady explained that there was a hole in the ceiling of our room and that the room was under repairs.  Uh oh.... then she said she would give us a free upgrade to a suite.  Score!

When we got to the room, it was an epic upgrade... it was at the top, with a view, and it was huge!  Normally the room goes for close to $80 a night, so I was thrilled. 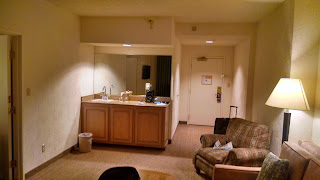 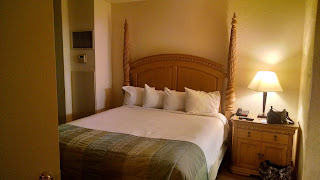 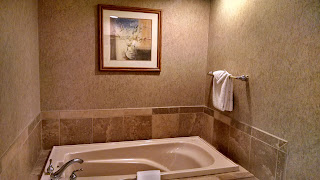 Harrah's -- like the rest of Laughlin, needs some updating, but overall it was a pleasant stay.

In the morning, we had two free buffet passes for the breakfast.  Harrah's definitely has a premium breakfast that we enjoyed.  It was nearly noon by the time I felt like eating and the place was a ghost town.  They have a good variety of food and it looks like the buffet, much like Laughlin, was once used for bigger and brighter things.

I had talked about doing some hiking, but I felt like garbage -- like crawl into a hole and die garbage. So we tried to find me a doctor.  There were only two in town -- and one didn't take our insurance.  Both wouldn't take an appointment and both said it was at least an hour wait, possibly longer.  I even rolled into one office and looked at the other sad sick saps and decided no way.

I wound up buying some cough syrup (expensive!) from the hotel gift shop.  Luckily, it helped immensely.

So I wound up walking around the city and poked around in the half a dozen or so casinos.  I tried to  to enjoy the atmosphere but I felt drained and horrible.  I sounded like an asthmatic smoker -- even walking at a good clip caused me to cough and wheeze like crazy.  Luckily, I didn't have a temperature, but I just felt drained.

I wound up gambling some but I had zero -- and I mean zero -- luck.  Insert money, press a button a few times, and walk away with pennies.  Seriously.  I saw people winning but clearly I was having no luck this trip.  Eventually I just sucked it up and continued my moaning and watched other people play (which isn't much fun)...

We wound up eating at Harrah's for dinner.  We were already at the hotel and I didn't feel like moving.  The buffet was pricey for dinner but not too bad.  There was also an army of Koreans there -- obviously touring the state and I wound up chatting with a few of them (I am fascinated by their pop culture)

In the morning, we wanted to try a different buffet.  Shari had heard that the Tropicana had a free buffet when you signed up for their player's club card.  Turned out that was false -- you got 10% off.  The buffet, at best, was average.  We should've gone back to Harrah's.

I felt horrible -- despite having a decent night's rest.  I was still coughing up a storm, I was broke, and to be quite frank, I didn't see how I was going to run anything this weekend.  I could hardly walk with coughing and hacking up crazy amounts of yuck.

We talked about simply returning home.  I was leaning towards just leaving that day and driving until I felt tired and getting a room.

After some serious hemming and hawing we opted to continue to Arizona.

First off, Laughlin's rooms are cheap.  There is free, covered parking (unlike Vegas now) and the food was actually fairly reasonable.  They weren't exactly giving it away, but it wasn't a ripoff.

I had had much higher hopes for the gambling.  Neither one of us had any luck.  Most of the casinos had newer games though.  We didn't have any problems finding games we wanted to play.

I'd definitely stay here again especially if I wanted something more quiet and cheaper.  It looks like there is some hiking and I was dying to run to the California and Arizona borders so I could claim running in three states in one day.... but I could hardly walk down the hallway let alone run.

I also would've loved to have seen Crystal Gayle -- she was playing.  But I would've ruined the show with my incessant coughing.  Maybe next time! 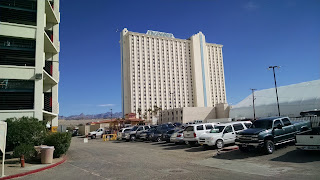 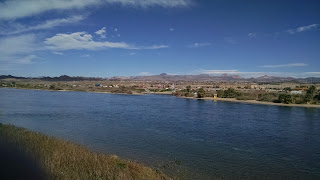 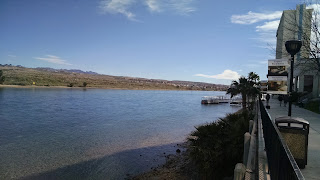 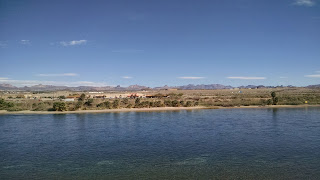 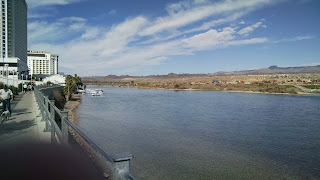 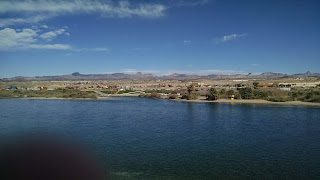 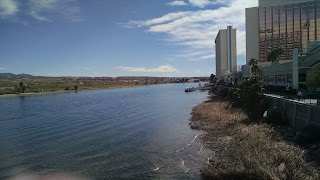 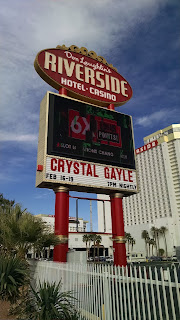 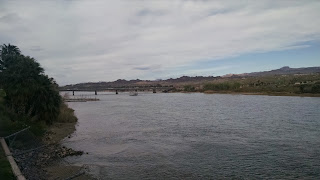 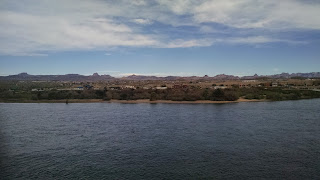 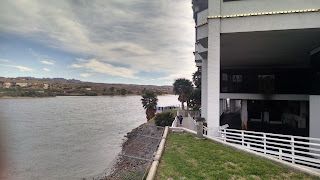 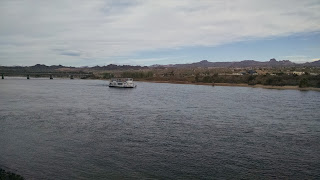 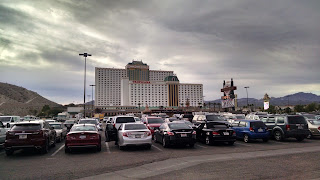